On the last day of the COMSOL Conference 2015 Boston, attendees gathered together to celebrate the recipients of the Best Paper and Poster awards. The awards were given to winners with projects covering many different subject areas, ranging from food science and electronic devices to plasma research and IED detection. Here, we’ll share more information about their innovative work.

This past week, I had the privilege of attending the COMSOL Conference 2015 Boston. This event showcases training opportunities and discussions led by industry experts, as well as innovative research from COMSOL Multiphysics users.

There were over 170 presentations during this year’s conference, showing an incredible variety of uses for multiphysics simulation and application design using COMSOL Multiphysics. “It’s a privilege to be able to honor the presenters and authors with these awards,” said Jennifer Segui, the Program Chair for the COMSOL Conference 2015 Boston. “We’re very grateful for their hard work and for sharing their innovative ideas with us at the conference,” she said.

Let’s take a closer look at this year’s winning projects. 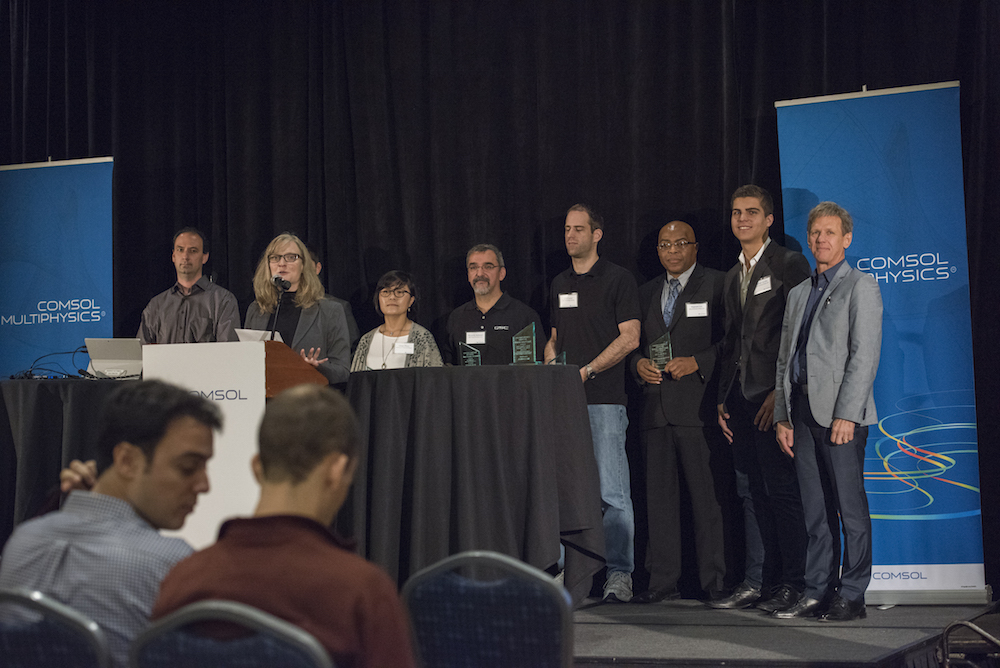 Our first award of the day went to Jeff Doody et al. from the Plasma and Fusion Center at Massachusetts Institute of Technology for their paper “Structural Analysis of the Advanced Divertor eXperiment’s Proposed Vacuum Vessel“.

This group modeled the stress and loading on the vacuum vessel in an Advanced Divertor eXperiment (ADX). An ADX is a high-field, high-power, and compact tokamak, which is a device used to study plasma. To better analyze their design, the researchers used two COMSOL Multiphysics interfaces, the Magnetic Fields interface and the Solid Mechanics interface. By using restraints suggested by their COMSOL Multiphysics model, the group was able to keep stress within allowable limits.

Simon Durand et al. from École Polytechnique de Montréal, the US Army ARDEC, and the General Dynamics OTS, Canada, Valleyfield were also given a Best Paper award for “Modeling of a Multilayered Propellant Extrusion in Concentric Cylinders“.

The paper introduced a novel multilayered propellant technology. In their design, material flows between the inner and outer section of a die through different path lengths. The goal of the research was to create an optimized die design that maintains a balanced flow and enables the flow of a variety of materials.

The CFD and Heat Transfer modules in COMSOL Multiphysics allowed the researchers to evaluate the nonisothermal steady-state flow of non-Newtonian fluids in their design. The team validated their finite element simulation results with physical experiments.

Cooling of a Hotspot with Electrowetting Droplet Actuation

The final Best Paper award went to Mun Mun Nahar et al. from the Department of Mechanical and Aerospace Engineering at the University of Texas at Arlington for “Numerical Modeling of 3D Electrowetting Droplet Actuation and Cooling of a Hotspot“.

Their research centered on heat produced by electronic devices. Too much heat can reduce device performance and durability. To avoid this, the researchers looked into electrowetting on dielectric (EWOD), a process that uses a voltage to adjust the surface tension between a solid substrate and a liquid droplet. Due to EWOD, hydrophobic surfaces can be changed into hydrophilic surfaces, causing the droplet to move.

EWOD can be used to efficiently manage heating in electronic devices by using an array of microdroplets to actively cool areas of locally high heat flux (also called hotspots). The team validated their preliminary results with experiments and plan to add more elements, such as Marangoni convection, to their model in the future. 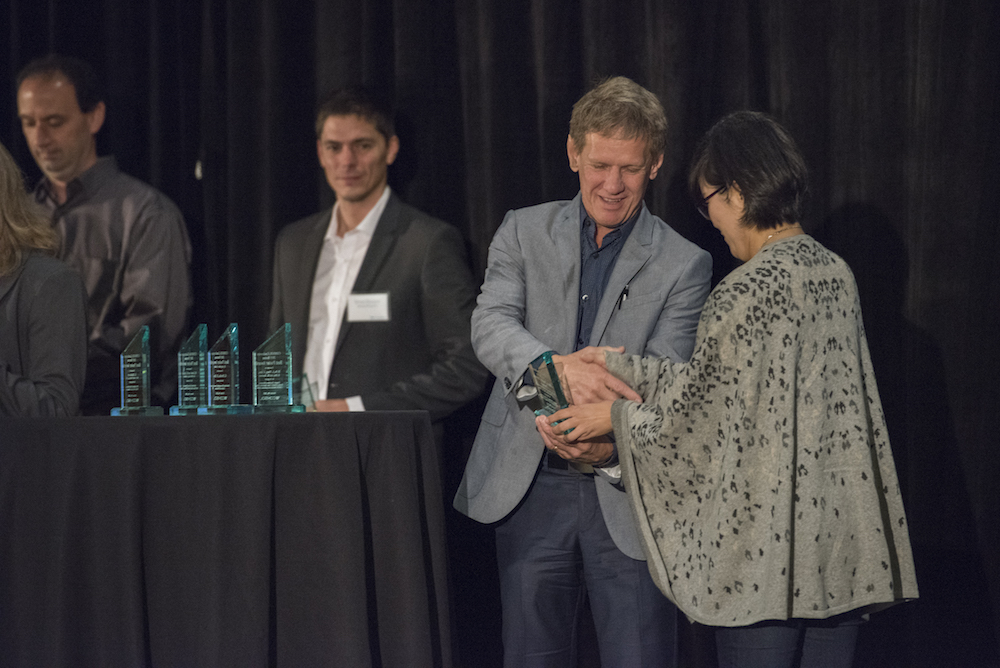 Public address (PA) loudspeakers need to provide clear announcements to the public and maintain their sound quality over large areas, such as workplaces and shopping malls. Instead of traditional testing, Balistreri used COMSOL Multiphysics to optimize the design of a ceiling speaker.

Balistreri discovered that with the versatility of the AC/DC and Acoustics modules in COMSOL Multiphysics, he could analyze many aspects involved in the design of PA loudspeakers. By using simulation, Balistreri was able to minimize prototype work and resource investment.

The second Best Poster award was given to Oren Lever and Ernest Lever from the Gas Technology Institute, Energy Delivery & Utilization, for their poster “Assessment of Squeeze-off Location for Small Diameter Polyethylene (PE) Pipe and Tubing“.

The team studied a squeeze-off of PE pipe that stops gas flow in order to perform downstream repairs and emergency shutoffs. However, the routine operations and maintenance involved in this process can be made easier by reducing the minimum squeeze-off distances for small pipe diameters.

To study the gas flow, the researchers created a COMSOL Multiphysics model of a PE squeeze-off that was fully parametric and time dependent. They observed that a squeeze-off for a small diameter pipe at a distance of three pipe diameters is possible. Empirical testing is currently ongoing to verify these results.

This poster addresses the temperature difference and quality issues that can result from heating a frozen sandwich in a microwave. They used COMSOL Multiphysics to model the heating of a sandwich consisting of five layers — bottom bread, burger, egg, cheese, and top bread — within a microwave. The microwave heating system itself included a waveguide, oven cavity, turntable, and sandwich.

The presenters wanted to share their simulation with a broad group of development scientists without simulation expertise. To do so, they used the Application Builder in COMSOL Multiphysics to create a simple user interface that lets those scientists utilize simulation to understand and help improve the microwave heating of frozen sandwiches.

The popular choice Best Poster award at the COMSOL Conference 2015 Boston was given to Dr. Reginald Eze and George Sivulka from the City University of New York — LaGuardia Community College and Regis High School for their poster “Remote Sensing of Electromagnetically Penetrable Objects: Landmine and IED Detection“. This award was chosen by popular vote among conference attendees.

For this poster, the researchers investigated the detection of buried environmental hazards, such as landmines and improvised explosive devices (IEDs). Ongoing advancements in landmine technology are making these devices harder to identify, so improvements in our knowledge of sensing technology is vital for continuing landmine detection.

Electromagnetic sensor technology can be used as a noninvasive way to determine a buried object’s shape and topological characteristics. Using COMSOL Multiphysics, the research team generated a template for subsurface detection of buried hazardous objects. The research illustrates the ability of finite element modeling with COMSOL Multiphysics to efficiently and accurately simulate real-world situations. With their simulation results, Eze and Sivulka hope to advance our knowledge of remote sensing techniques for future improvements.

Congratulations to Our Winners

This year’s Best Paper and Best Poster award winners come from a wide range of backgrounds and application areas, and each contributed great work to the conference. We highlighted seven award-winning projects in this blog post, but feel free to read more about the many user projects showcased at the COMSOL Conference 2015 Boston. We’d like to congratulate everyone who presented their work at this conference, and we hope to see more innovative ideas in 2016! 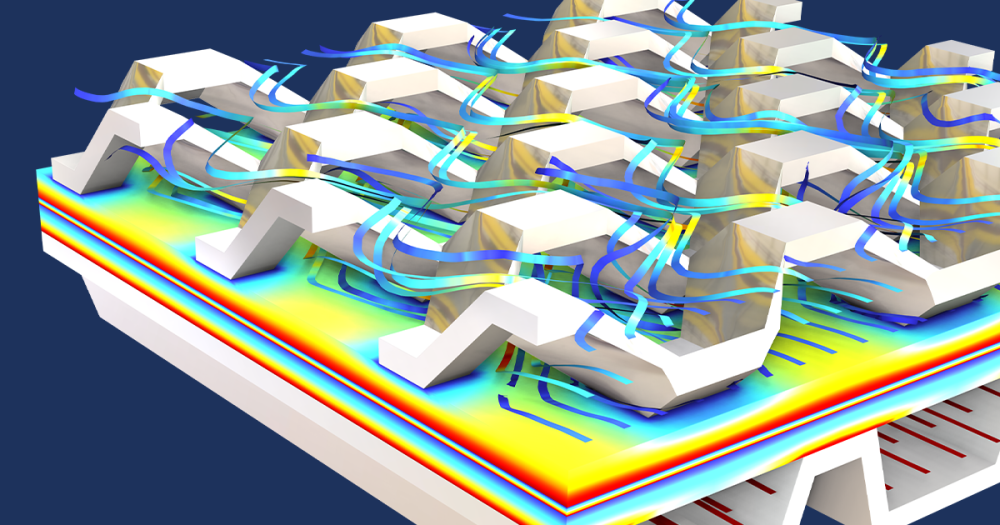