In my work at COMSOL, it’s always interesting to see how broad the field of heat transfer can be. Far from being limited to steel ingots and CPU fans, researchers often use COMSOL Multiphysics to study heat transfer in food manufacturing. One good example of this is the study of thermal and mechanical effects in the production of puffed rice, which was presented at the COMSOL Conference 2013 in Boston.

Researcher Tushar Gulati and group leader Professor Ashim Datta at Cornell University specialize in applying physical methods, such as simulation with COMSOL Multiphysics, to problems in food science. Getting food right — high quality food, every time — demands control and understanding of the right amounts of heat and water content.

When we optimize the quality of our cooking in the kitchen, we normally do it by trial and error — boil for a little longer, use a little less heat on the flame, and see if it tastes better or worse than last time. For industrial food processing, though, this is not an efficient route. It may be very expensive or time-consuming to set up a large number of batches of product in order to establish the right cooking conditions to give consistently high-quality results.

Rice kernel. Image by T. Gulati and A. Datta, obtained from their poster submission.

Therefore, industrial food process design rests on engineering principles, including computer-aided engineering such as simulation. Computational modeling of food products allows for better understanding of the physical and chemical processes that control cooking, and it allows different conditions to be tested cheaply and quickly. From the results of a model, an engineer can predict optimal conditions for quality control in puffed rice manufacturing.

The Problem of Puffed Rice

Gulati and Datta considered the phenomena involved in the preparation of puffed rice, in which rapid heating of the wet, parboiled rice grains causes water evaporation. The water vapor is trapped in the porous structure of the rice grain and so the grain becomes pressurized and expands before the vapor escapes, giving the familiar “puffed” effect.

As the Cornell team explain in their poster, the extent to which each rice grain grows (“volume expansion”) is a major quality marker for puffed rice products. Hence, they sought to predict this volume expansion from the cooking conditions and the properties of the rice grain itself.

To combine all of the necessary phenomena in a single model, the multiphysics capabilities of COMSOL Multiphysics proved ideal. A single user interface can be used to couple the full range of physical effects involved in rice puffing, even though they come from traditionally separate areas of physics. The predictive model had to include many different effects: transport of heat in the rice grain through conduction and convection; the vaporization of water and the transport of water and water vapor within the pores of the rice grain; and the permanent (plastic) shape change of the rice grain due to the pressure acting on the solid structure.

By including all of the above effects, the puffing of rice could be modeled with high fidelity, with fewer approximations required to implement the simulation. The results showed that a lighter, more porous grain allowed for faster evaporation, which in turn increased the internal pressure on the rice grain and gave greater volume expansion for a higher quality puffed rice product. 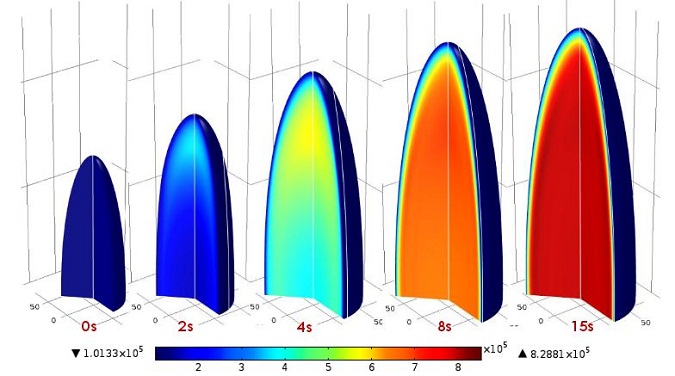 Simulation depicting how much gas pressure is generated as a result of evaporation, volumetric expansion, and plastic deformation. Image by T. Gulati and A. Datta, taken from their poster submission.

How did Gulati and Datta know that their model worked? As they explain in their abstract, they used high-speed photography to confirm that the shape change and volume expansion of the rice grains were correctly predicted by the model. Measurements of water content of the puffed rice also agreed with the model. This validation by experiment under test conditions suggests that their physical model is a suitably accurate predictor of the physics of the puffed rice problem.