Gallium is an element with a strong presence in the commercial market, particularly the electronics industry. Recent research has brought the spotlight back on this unique metal and its use in new technologies. Here, we take a closer look at this element and what the future holds for it.

Getting to Know Gallium

While its existence was first predicted by Dmitri Mendeleev in 1871, gallium was not discovered spectroscopically until 1875 by Lecoq de Boisbaudran. The silvery metal was identified by two violet lines, its characteristic spectrum, within a sample of sphalerite.

So, what makes this element stand out in the periodic table? One defining characteristic of gallium is its low melting point. For instance, if you were to take a piece and hold it in your hand, it will begin to melt. Remove it, and the liquid will refreeze. Interestingly enough, this metal also has an extremely high boiling point, giving it one of the largest liquid ranges out of any metal. This has resulted in its use within high-temperature thermometers. It is important to note that even under high temperatures, gallium is able to maintain a low vapor pressure.

Another valued feature of gallium is its ability to be easily combined with other metals. One example is gallium arsenide, which is used to manufacture various electronic devices like solar panels, LEDs, and optical windows. This compound is often used as a substitute for silicon as it features higher electron speeds and can operate under a greater range of temperatures. 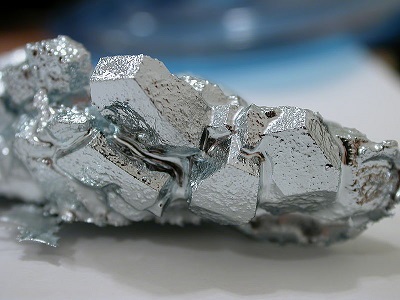 Gallium is an element with unique mechanical properties. Image by foobar (Own work) CC-BY-SA-3.0, via Wikimedia Commons.

New research initiatives have shed more light on the potential of gallium. According to the article “Researchers Study Gallium to Design Adjustable Electronic Components“, a researcher at North Carolina State University has explored the use of the chemical element in creating adjustable electronic components. When gallium reaches a liquid state, its surface oxidizes and a sort of skin forms over the liquid, similar to a water balloon. The thin layer of solid skin that is produced allows the liquid metal to be patterned into 3D shapes. This characteristic could potentially allow gallium to be molded into functional structures as a way to produce flexible and reconfigurable parts, like antennas. The freedom to change the shape and dimensions of an antenna is particularly important as it allows you to control its frequency in sending and receiving signals.

According to the paper “Liquid Metal Angiography for Mega Contrast X-ray Visualization of Vascular Networks“, some Chinese scientists found that adding liquid gallium, in-vitro, to pig hearts and kidneys produced higher resolution X-ray scans of these organs. The addition of the liquid metal resulted in more enhanced images, highlighting the contrast between the blood vessels and the surrounding tissues. By offering a clear depiction of capillary networks that would be otherwise invisible, this technique is an important development in the study of physiology and pathology.