Manned vessels traveling through space require highly efficient and reliable life support systems, such as carbon dioxide removal assemblies (CDRAs). Poorly designed systems can shorten missions and cause potential danger. Simulating CDRA systems, however, can be quite time-consuming and difficult due to their complex nature. To address such challenges, a team at NASA’s Marshall Space Flight Center developed a 1D model in the COMSOL Multiphysics® software to efficiently analyze the 4-bed molecular sieve (4BMS) of a CDRA system.

Advancing the Next Generation of Space Travel

At NASA’s Marshall Space Flight Center, researchers are reaching for the stars, quite literally. As participants in the Advanced Exploration Systems (AES) program, they seek to advance new technologies that could allow for future space missions that extend past Earth’s orbit.

The organization participates in the Life Support Systems Project (LSSP), which is part of NASA’s AES program. The goals of this project are to extend the duration of crew missions, improve reliability, reduce risks, and address gaps in technology with regards to life support systems. Both the LSSP and AES are directly derived from the architecture of the International Space Station (ISS). 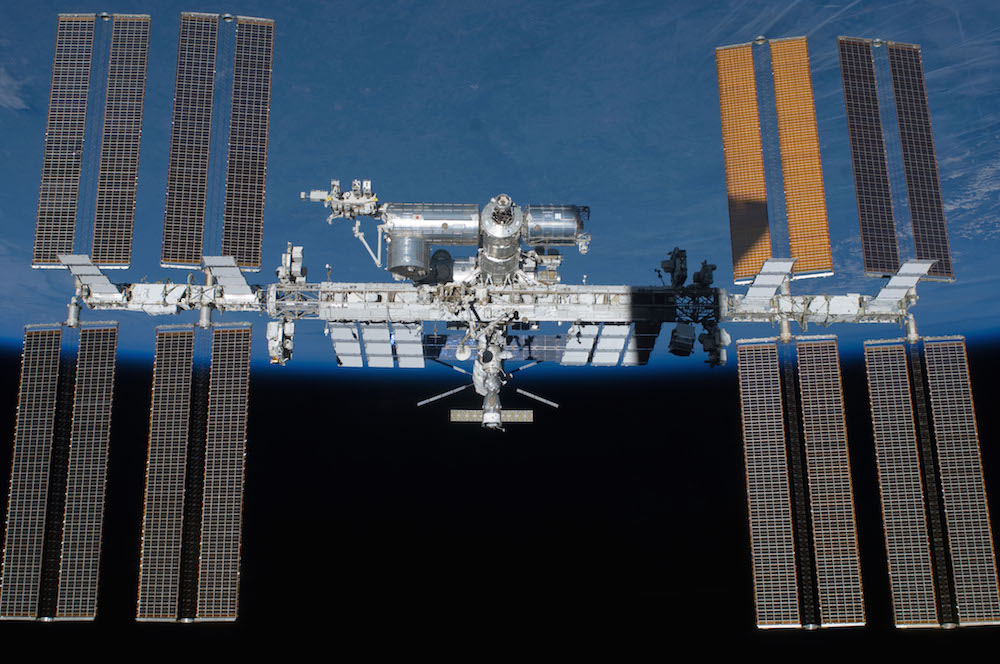 The International Space Station. Image by the NASA Goddard Space Flight Center. Licensed under CC BY 2.0, via Flickr Creative Commons.

When it comes to manned vessels, one element that is required for successful space travel is efficient and reliable carbon dioxide removal assembly (CDRA) systems. Since these systems directly affect the health and well-being of a vessel’s crew, optimizing their design is of great importance. That, however, is easier said than done. Physical tests require a great deal of time and energy, and simulation studies can hit snags due to the inherently complex nature of CDRA systems. Such challenges have prompted engineers to explore new approaches to system development.

To supplement testing and avoid overcomplicated simulations, researchers at NASA’s Marshall Space Flight Center used COMSOL Multiphysics to create a 1D model of a 4-bed molecular sieve (4BMS), a component of the ISS CDRA system. Their goal: Identify problem areas, with the hopes of eventually optimizing a CDRA 4BMS system.

The Dynamics of a 4-Bed Molecular Sieve

Let’s begin by taking a closer look at the CDRA 4BMS system analyzed in this study. The main method for gas separation used by atmosphere revitalization systems is absorption in packed beds of pelletized sorbents. As illustrated in the schematic below, this system operates by first sending cabin air through a desiccant bed that absorbs water vapor from the air. The cooler and blower then precondition this dry air before passing it through a sorbent bed that removes CO2. When the air stream enters a second desorbing or desiccant bed, the water vapor is added back and the air is returned to the cabin.

Schematic depicting a CDRA 4BMS system. Image by R. Coker and J. Knox and taken from their COMSOL Conference presentation.

As the process above occurs, there is also another process taking place in the 4BMS. The second sorbent bed is closed at one end and heated on the other, which releases CO2 from the bed. This is followed by a ten-minute air save mode that helps to recover most of the air trapped in the sorbent bed. After this, the bed is vented into space.

The entire sequence highlighted in this section is called a half-cycle and lasts for approximately 155 minutes. In the next half-cycle, the two absorbing beds transform into desorbing beds, and vice versa.

Building a 1D Predictive Model of a 4BMS with COMSOL Multiphysics

The CDRA 4BMS, as you can see, is an intricate system. Yet here, predictive 1D models are accurate enough to help design the system’s desiccant beds. Although the sorbent beds of this system aren’t cylindrical, and the heaters create the potential for a complex multidimensional flow path, the researchers observed that air flows relatively uniformly through the channels. This prompted them to use a 1D approximation to study the beds, creating a fully coupled model to solve for concentrations, pressures, and temperatures.

For their study, the researchers modeled the transport of two concentrated sorbate species, carbon dioxide and water, in air. This mixture flows through four linked beds of sorbent pellets. Calculated effluent mass fractions of CO2 and H2O from the upstream beds were applied as inputs for the next downstream bed. The carbon dioxide beds utilized a heater-assisted vacuum desorption model, with heat transfer involving the gas, porous media, solid housing, and can insulation modeled as well. Further, the researchers used distributed PDEs and Toth isotherms to determine the absorption rates and pellet loading.

The figure below shows the idealized schematic for the 4BMS model. Here, we can see that the team only modeled the glass beads and parts of the beds containing sorbents. In their model, the researchers handled the glass bead layers the same way as the sorbent layers, aside from the H2O and CO2 having zero adsorption and desorption capacity. 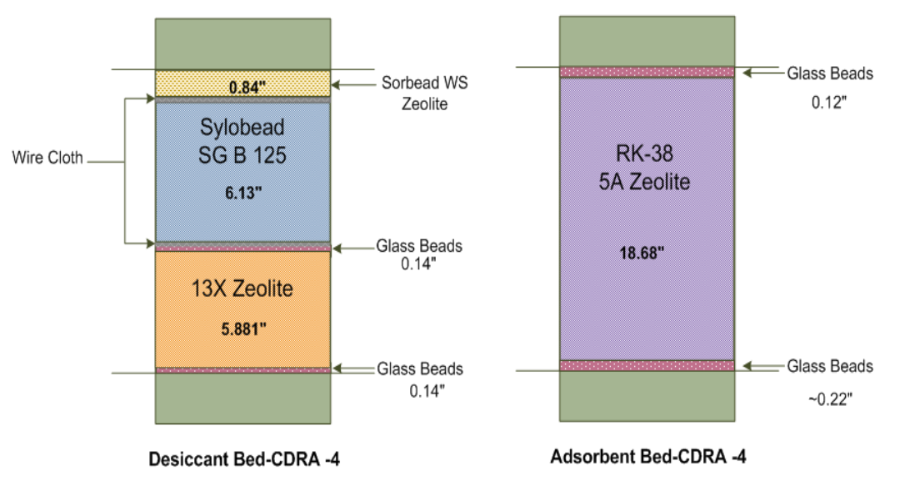 The idealized 4BMS model. Images by R. Coker and J. Knox and taken from their COMSOL Conference paper submission.

To validate their model, the team used an ISS CDRA 4BMS ground test. It is important to note that some of the inputs, including total sorbent mass, degree of thermal insulation, and pressure drops across the beds, are unknown. Further, in order to achieve faster results and increase numerical stability, the initial bed loading conditions were set close to the expected final results.

The following series of graphs compare the simulation results with experimental data for sorbent bed temperatures and carbon dioxide partial pressures. Overall, the experimental system converged fairly quickly, with the data in the graphs generated from the test’s fourth half-cycle.

When plotting the temperature at the thermocouple (TC) locations for both the baseline data and the COMSOL Multiphysics model (shown below), the researchers noted that although their model’s cooling rate during adsorption was slightly fast, it matched the data fairly well during desorption. This could be due to the fact that the 1D model has a large, simple geometry and uses an ad hoc method to include fins. 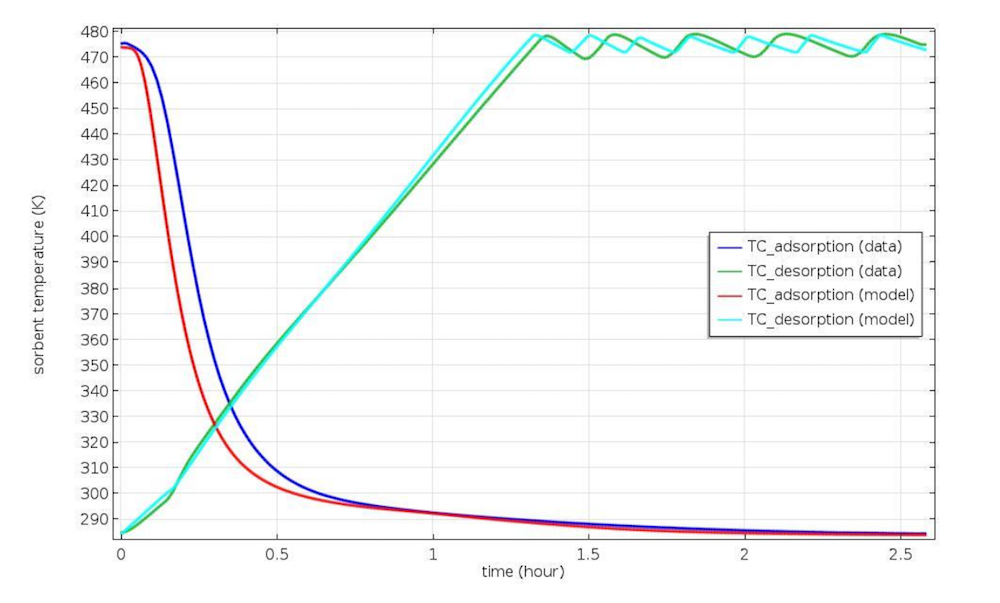 The next step involved comparing the partial pressure of carbon dioxide at the desiccant bed influent and effluent. As the graph below indicates, both simulation and experimental results feature a spike at the beginning of the half-cycle. The plot further shows a rise at the end of the half-cycle, indicating that the sorbent bed is fully breaking through. This is fine, however, since a full sorbent bed maximizes CO2 removal efficiency during desorption. 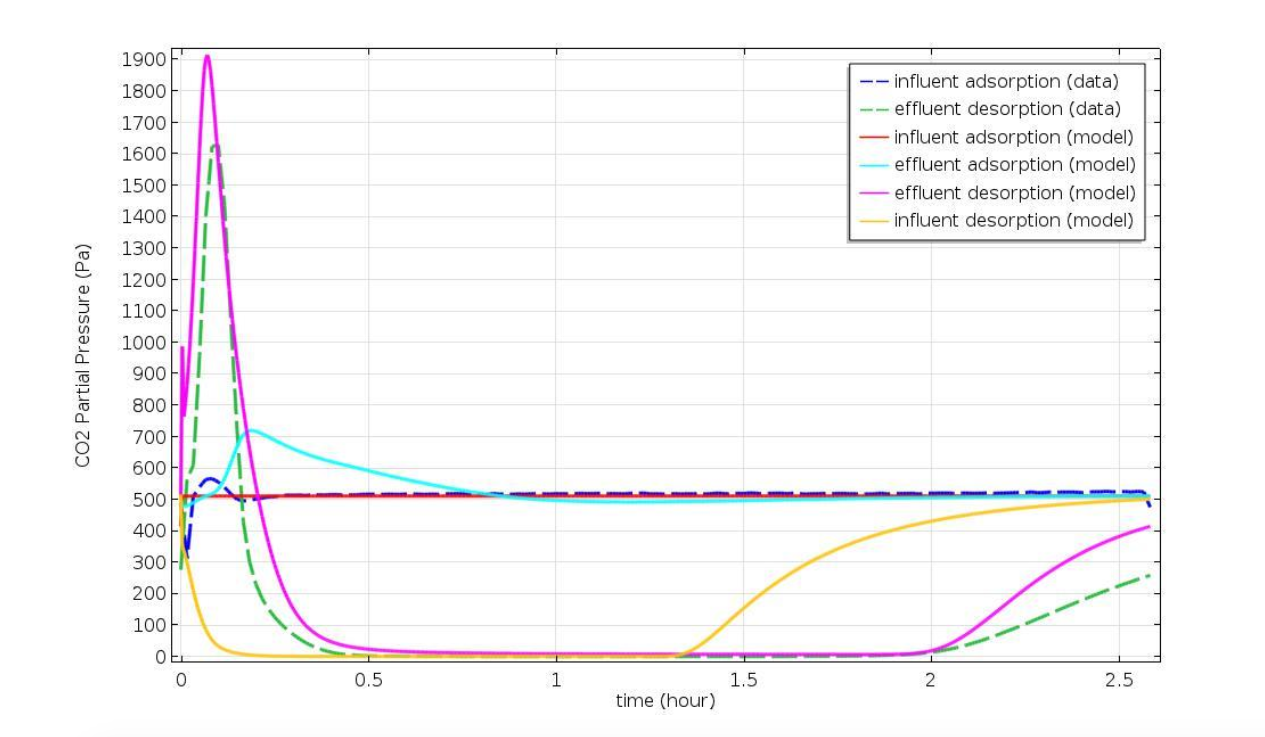 The researchers at NASA’s Marshall Space Flight Center successfully created a fully functional model of a 4BMS that can be used for the predictive modeling of an entire ISS CDRA 4BMS system. Looking ahead, the team notes that their 1D model shows promising capabilities for predicting the behavior of such a system and thus locating any potential problem areas in the 4BMS. They have, for instance, already used it to look for unexpected heat leaks in sorbent beds and to predict breakthrough behavior in desiccant beds.

The plan is to eventually validate the model against other CDRA-4EU data sets. After doing so, the researchers can use it as a resource to guide the design process for the next generation of CDRA 4BMS systems, as well as to optimize atmosphere revitalization systems such as the one on the ISS.

The National Aeronautics and Space Administration (NASA) does not endorse the COMSOL Multiphysics® software.