One application of acoustic streaming (AS), the process of using sound waves to generate steady fluid motion, is adjusting grain morphology during the metal solidification process. Since ensuring the best product possible is key, engineers in the metal processing industry must improve AS, which can require costly field tests and test rigs. To see if simulation can be used to reduce this need, researchers analyzed AS treatment with the COMSOL Multiphysics® software.

When molten metal solidifies, grains begin to form. These affect the physical properties of the solid metal; for instance, a smaller grain size makes the metal stronger. The grain of a metal is affected by many factors, such as temperature and cooling time. Engineers can also adjust grain morphology during the metal solidification process by using the physical phenomenon of acoustic streaming (AS) to induce drag on particles. 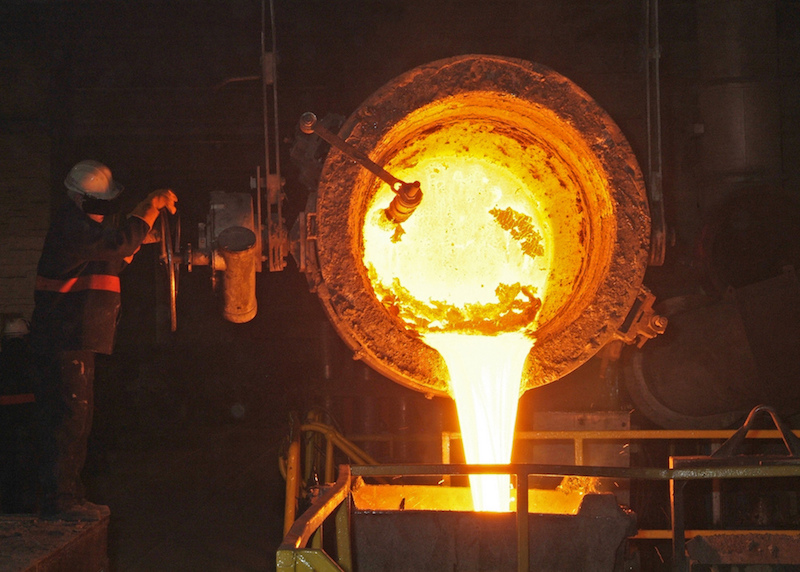 In AS, an oscillating sonotrode sound emitter is placed in a liquid and generates a steady fluid motion. To produce a significant effect, the sound waves need a high amplitude and frequency, often in the ultrasound range. Thus, this technique can require an ultrasonic treatment.

To further improve and develop AS, engineers rely on costly physical experiments. Simulation provides an alternative, enabling those in the metal processing industry to build models to test AS treatments that use different materials and fluids. These models can then be validated via experimental testing.

Let’s take a look at how researchers from the Institute of Thermal and Fluid Engineering and Institute of Product and Production Engineering at the University of Applied Sciences Northwestern Switzerland investigated this possibility.

The research team’s goal was to build and experimentally validate an AS model that can analyze a variety of fluids by altering the parameters. The resulting 2D axisymmetric model represents an experimental setup of an oscillating sonotrode placed into a fluid and generating a harmonic acoustic pressure field. They simplified this model by assuming isothermal behavior, neglecting cavitation, and using an averaged stationary flow. 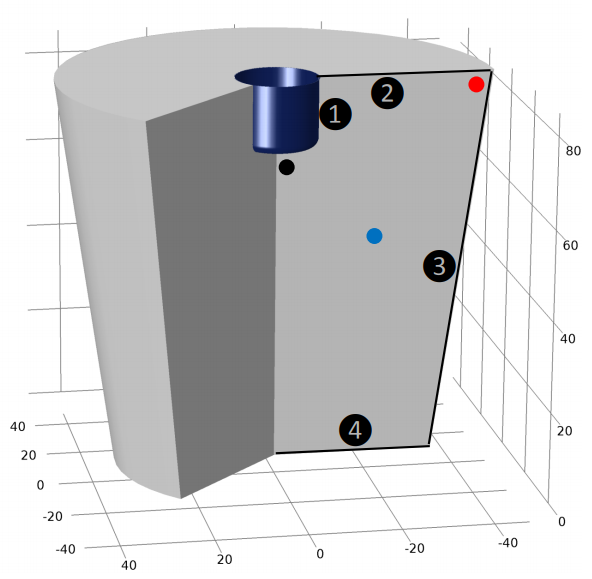 Acoustic streaming sample geometry. The numbered dots represent the boundary positions and the colored dots show the locations of the three tracing massless particles. Image by D. Rubinetti, D. Weiss, J. Muller, and A. Wahlen and taken from their COMSOL Conference 2016 Munich paper.

Note that accounting for the acoustics in the high-frequency domain requires a compressible fluid description, due to the coupling of density and pressure perturbations.

Performing a Multiphysics Simulation of AS

The researchers solved the model equations with three study steps:

The first study shows that the sonotrode acceleration causes a sharp rise in acoustic particle velocity. Using the acoustic velocity field found here, the force term for the second study is generated. 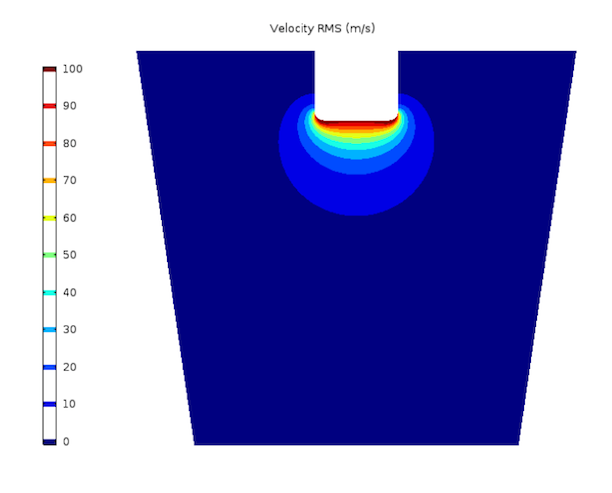 The fluid flow study investigates the flow pattern, beginning with the axial jet exiting from the actuating sonotrode tip. The jet continues to the bottom wall, where it is deflected and creates vortices in the bottom corners. The generated flow is almost at a standstill in the open interface zones and has the highest value beneath the sonotrode. 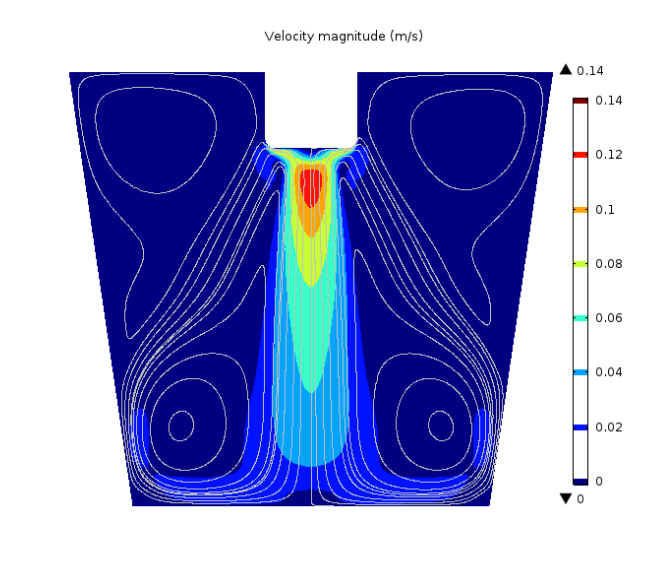 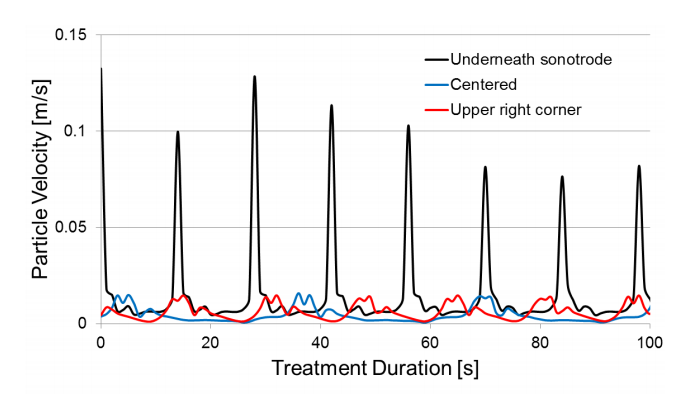 Left: Stationary velocity field for an aluminum melt with a frequency of 20 kHz and 30 µm amplitude. Right: Comparison of the velocities of the three massless particles, with the colors matching those in the sample geometry. Images by D. Rubinetti, D. Weiss, J. Muller, and A. Wahlen and taken from their COMSOL Conference 2016 Munich paper.

When looking at the dispersal of the three separate tracing particles, the model demonstrates that the particles beneath the sonotrode (depicted as the black line in the right plot above) have a high acceleration, which increases the number of cycles.

Validating the AS Numerical Model Against Physical Experiments

To experimentally validate their simulations, the researchers created a small-scale laboratory model involving an aluminum sonotrode partially submerged in a fluid-filled crucible. Next, they performed experiments at a frequency of 20 kHz and at three different amplitudes: 10, 20, and 30 µm. To track the fluorescent particles used in the experiment, the team relied on a combination of a high-speed camera, diode laser, and lasersheet. They then determined the correlated velocity field via particle image velocimetry. 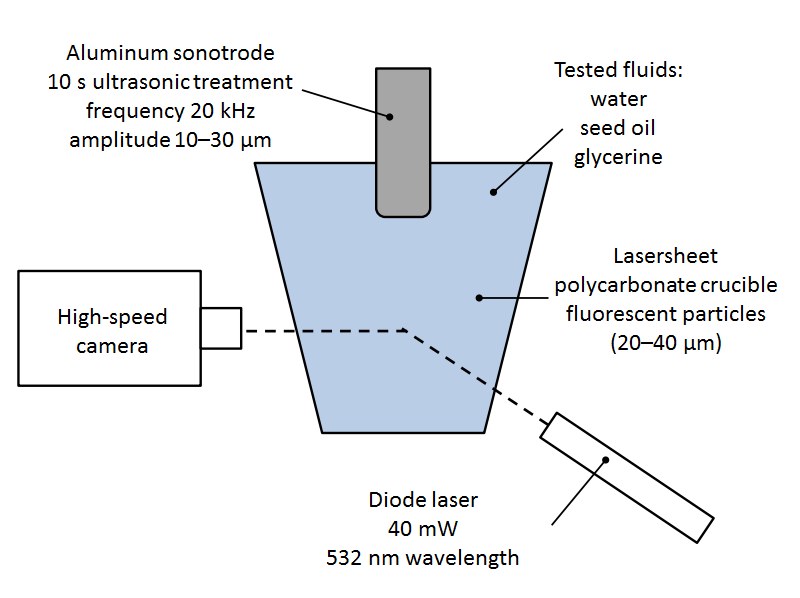 The experimental setup. Original image by D. Rubinetti, D. Weiss, J. Muller, and A. Wahlen and taken from their COMSOL Conference 2016 Munich paper.

When testing a seed oil liquid, we can see that the axial jet is visible in both the simulation and experimental results, as shown below. While the results don’t completely line up, they do match on the right side of the crucible for the direction and location of the induced flow.

The velocity fields for the simulation (left) and seed oil test case (right) with a frequency of 20 kHz and amplitude of 30 µm. Images by D. Rubinetti, D. Weiss, J. Muller, and A. Wahlen and taken from their COMSOL Conference 2016 Munich paper. 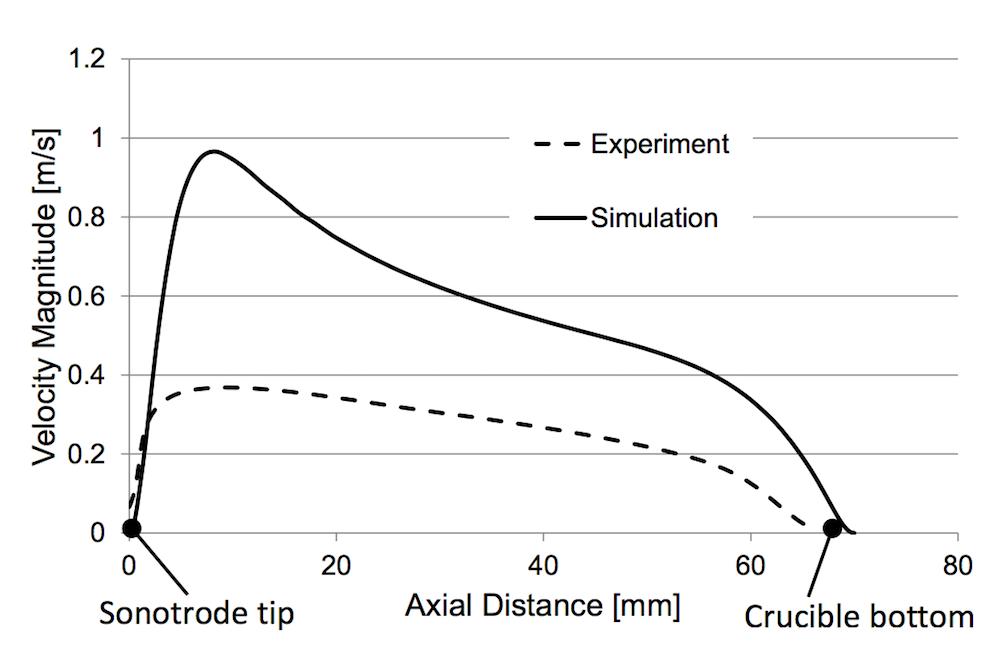 Comparison of the simulation and experimental results for the velocity magnitude along the rotational axis. Image by D. Rubinetti, D. Weiss, J. Muller, and A. Wahlen and taken from their COMSOL Conference 2016 Munich paper.

The deviation between the results may be due to a few reasons, including nonaccurate optical measurements (the experimental data is difficult to collect) and the team’s simplified simulations. The underlying issue may be that the flow is not steady in reality. As their experimental plot above confirms, momentum dissipates a lot more in the experiments than the model. This suggests that there are unsteady smaller eddies that transfer momentum at a rate that is not described by the averaged steady flow used in the model.

Through their experimental testing, the research team concluded that their AS model gives a qualitative description of the flow, except for the small region close to the sonotrode where the description seems to be fairly accurate. As a reasonable approach for analyzing AS and predicting fluid flow behavior, it can save time and money by minimizing the required amount of physical experiments.

Simulation is also a good choice for testing various fluids, parameters, and geometries. This enables engineers to efficiently study different AS treatments by tailoring the model to fit a specific case. The researchers also note that the model is versatile enough to be used to study other sound-driven fluid motion applications.

Thank you for your comment. While this specific model file is not available for download, you may find this example helpful: https://www.comsol.com/model/acoustic-streaming-in-a-microchannel-cross-section-17087.

We also encourage you to to direct any modeling questions you may have to our Support team.
Online Support Center: https://www.comsol.com/support
Email: support@comsol.com