The electron energy distribution function (EEDF) plays an important role in plasma modeling. Various approaches can be used to describe the EEDF, such as using an analytic function like a Maxwellian or Druyvesteyn function or solving the Boltzmann equation. Today, we will demonstrate the influence that the EEDF has on a plasma model’s results.

Editor’s note: This blog post was updated on March 4, 2022, to reflect new functionality in version 6.0 of the COMSOL Multiphysics® software.

The electron energy distribution function is essential in plasma modeling because it is needed to compute electron source terms and transport parameters from appropriate cross sections for electron impact collisions. By default, the Plasma interface uses a Maxwellian EEDF. This is a good start to prepare a model and obtain general tendencies (e.g., electron density vs. applied voltage). However, for more detailed studies, a computed EEDF should be used because for most cold plasma applications, the EEDF is strongly in nonequilibrium. In other words, the EEDF deviates considerably from a Maxwellian distribution. In the following sections, we show several options to use for analyzing the EEDF and its influence in the results of a model of a DBD reactor.

Functions That Describe the EEDF

For a Maxwell distribution function, g is equal to 1, while g equals 2 for a Druyvesteyn distribution. Lastly, \Gamma is the incomplete Gamma function.

If the electrons are in thermodynamic equilibrium among each other, the distribution function is Maxwellian. However, this is only true if the ionization degree is high. Here, electron-electron collisions drive the distribution toward a Maxwellian shape. The figures below show Maxwellian EEDFs represented in two different forms. 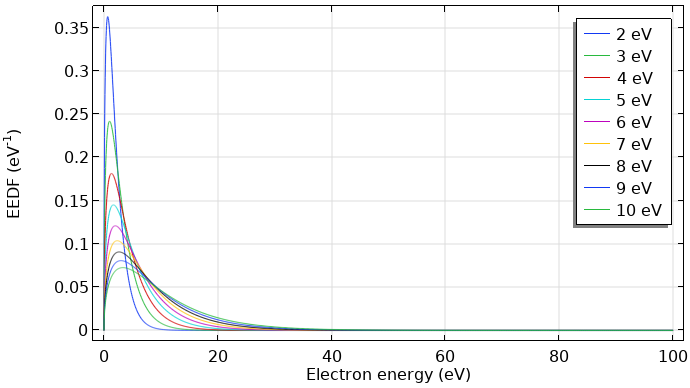 Maxwellian EEDF in eV–1 for mean electron energies from 2–10 eV. 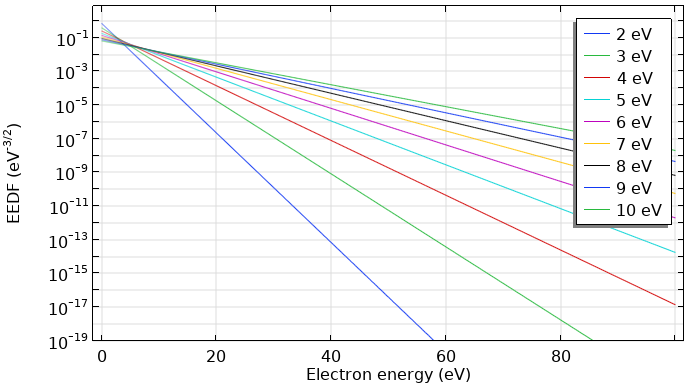 Maxwellian EEDF in eV–3/2 for mean electron energies from 2–10 eV.

Instead of using a constant collision frequency, like in the Maxwellian EEDF, the Druyvesteyn EEDF assumes a constant, electron-energy-independent cross section. This leads to a drop of the EEDF at higher electron energies for the same mean electron energy.

To solve the electron Boltzmann equation in a reasonable time, and therefore compute the EEDF, drastic simplifications are necessary. A common approach is to expand the distribution function in spherical harmonics. The EEDF is assumed to be almost spherically symmetric, so the series can be truncated after the second term (a so-called two-term approximation). This approach is used in the Boltzmann Equation, Two-Term Approximation interface.

From the above-mentioned distribution functions, this approach is the most accurate way to compute the EEDF because an anisotropic perturbation is introduced. Another point that makes this approach more accurate is that, commonly, the EEDF is computed based on provided coherent sets of electron impact cross sections that describe how electrons lose/gain energy in collisions with the background gas. This way, the EEDF describes how electrons gain energy from the electric field and lose it in collisions for a specific gas or mixture of gases.

As shown below, the computed EEDF strongly deviates from a Maxwellian EEDF. The main difference is that the high-energy tail drops considerably when the electrons reach energies of the first electronic excited state of argon at 11.5 eV. The computed EEDF is also underpopulated at low energies and overpopulated in the mid energies, giving a slower slope in the region before the first excitation level. This EEDF shape is commonly obtained in low-temperature plasmas of noble gases. 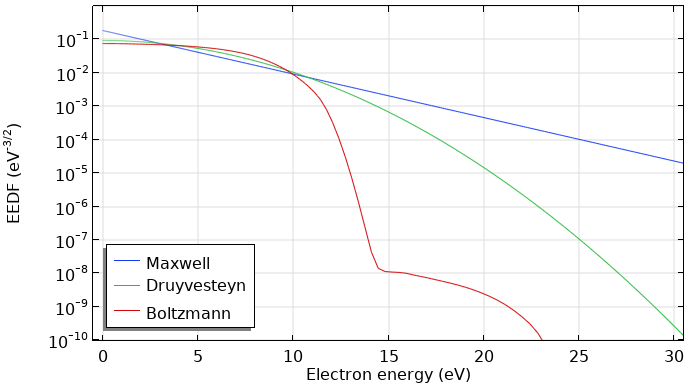 Comparison of a Maxwell, Druyvesteyn, and computed EEDF using the Boltzmann Equation, Two-Term Approximation interface for argon. All EEDFs have a mean electron energy of 5 eV.

In the plasma model, the EEDF is needed to compute the rate coefficients, k_k, for the electron collisions reactions, according to the equation:

In the above equation, \gamma = \sqrt{2q/m_e}, the electron energy is ϵ, and \sigma_k is the cross section for reaction, k.

The rate coefficients for excitation and ionization highly depend on the shape of the EEDF. This is mainly due to the fast drop-off in the population of electrons at energies exceeding the first excitation level threshold. Using a Maxwellian EEDF can lead to an overestimation of the ionization rate, which is shown below. 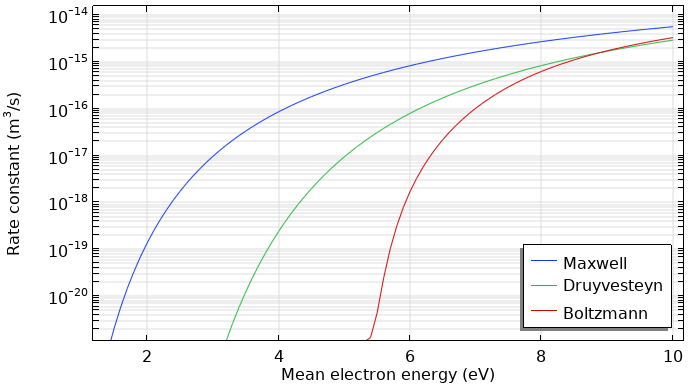 Furthermore, the electron transport properties can be computed by means of the EEDF, using the Boltzmann Equation, Two-Term Approximation interface. The computed transport coefficients have less dependence on the type of EEDF. 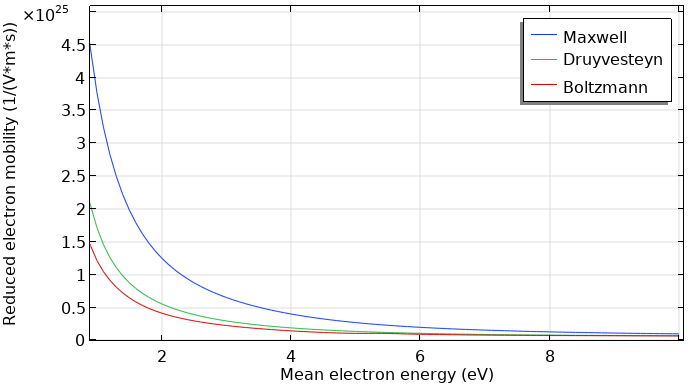 Comparing the Model Results of a Dielectric Barrier Discharge

Although the rate coefficients can differ by orders of magnitude, we must be aware that tendencies of macroscopic and averaged quantities do not change that drastically when changing the EEDF. In the Application Gallery, there is a model of dielectric barrier discharge (DBD). This model simulates electrical breakdown in atmospheric pressure argon.

The model was recomputed with the three different kinds of EEDFs, and we compared the results. The next two figures show the total current at the grounded electrode and the instantaneously absorbed power in the plasma. The plasma is driven with a sinusoidal voltage with a frequency of 50 kHz. The figures show the behavior over two periods. The results look similar. So, the choice of the EEDF influences the modeling results, not orders of magnitude (but in this case, much less than a factor of two). This, of course, depends on the model and the specific results you wish to extract. 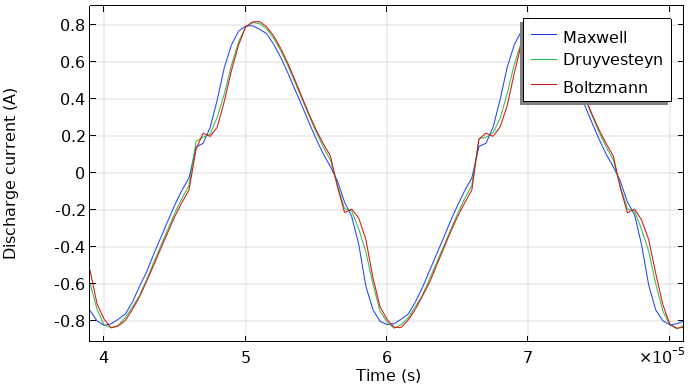 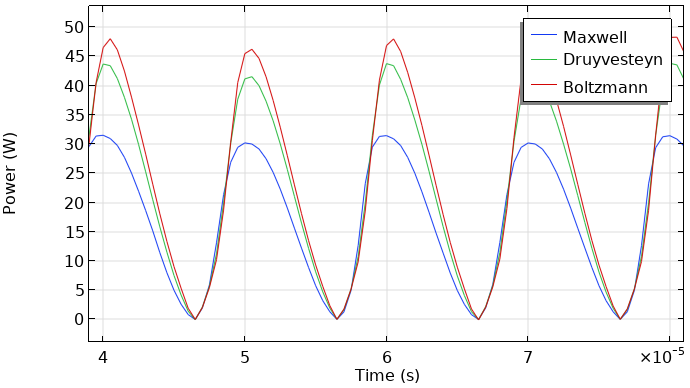 Thanks for this blog. Please elaborate on the quantitative difference between high and low degree of ionisation in terms of choosing between the Maxwellian and Druyvesteyn EEDF.

hi, I am Khalid I want to talk to you I am also PhD scholar in electrical engineering
so please send me your email so that I can talk you related to my study