Efficient, cost effective, and environmentally friendly, friction stir welding (FSW) is useful for many applications. As the name implies, this process involves using friction to heat materials and then stirring them together. For optimal FSW performance, the generated heat has to be just the right temperature: Too high and the materials melt, weakening the weld; too little and the process is inefficient. Using the COMSOL® software, you can evaluate and improve heat transfer in the FSW process.

Friction stir welding is a solid-state joining process in which a rotating tool welds materials together. The lower half of the tool (i.e., the pin) goes in the joint, with the friction from the rotation heating the materials just enough to soften them but not melt them. The pin then mixes the materials together, producing a strong weld. As the tool moves along the joint, the upper part (i.e., the shoulder) slides along the top, smoothing the weld and creating a nearly seamless appearance. 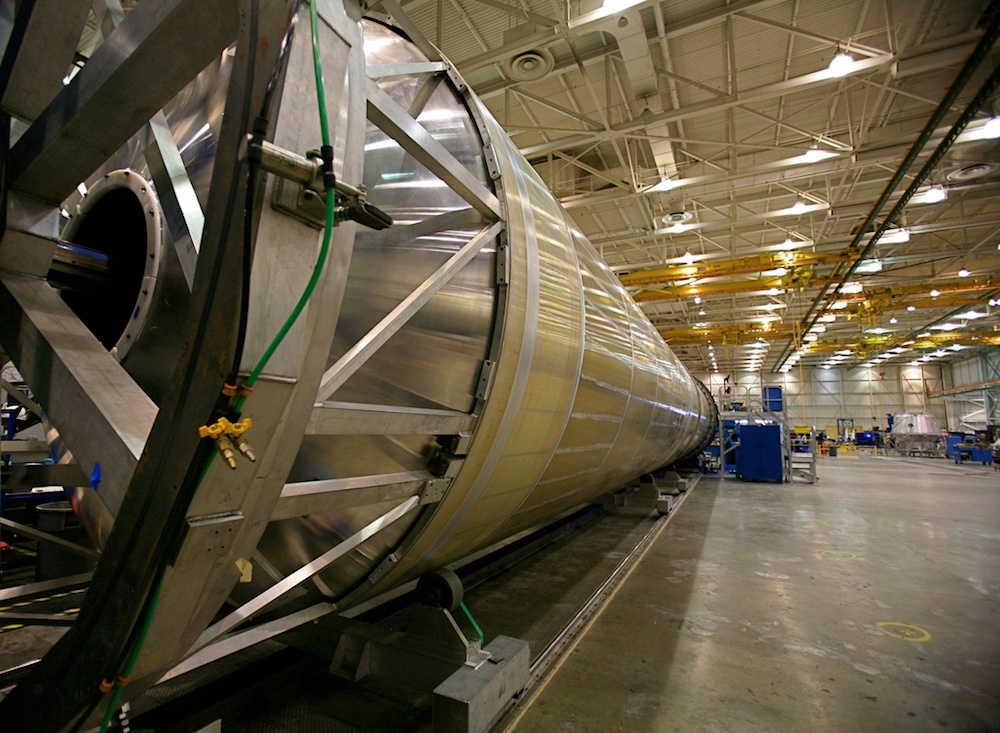 The booster tank for the Falcon 9 was welded using FSW. Image by Steve Jurvetson. Licensed under CC BY 2.0, via Flickr Creative Commons.

Compared to traditional fusion welding techniques, FSW has a number of advantages. The welds are not only stronger, smoother, and lighter but also have improved mechanical properties like higher fatigue resistance and tensile strength. The lack of melting in FSW also means that less material is needed, making the technique more cost efficient and suitable for extremely thin materials (such as those that are less than 1 mm thick). What’s more, this process doesn’t produce toxic fumes, so it’s safer for both workers and the environment. Other benefits of FSW include its speed; ability to be easily automated; lack of consumables (e.g., filler wire); and ability to join materials that are dissimilar (e.g., plastics with alloys) or hard to weld.

Due to these qualities, FSW has been adopted by manufacturers in various fields. Just five years after it was patented in 1991, the technique was used commercially in the shipbuilding industry to manufacture freezer panels for fishing boats. The process has been applied in other transportation applications, such as superliners, high-speed train carriages, and spacecraft; as well as electronic devices like desktop computers. FSW has even been used to seal nuclear waste, create cooking equipment, and manufacture furniture.

Before using FSW in an application, engineers must evaluate the process for aspects like the shape, size, and speed of the tool to ensure that no melting occurs. To do so, they can simulate the heat transfer that takes place during FSW with the Heat Transfer Module, an add-on product to the COMSOL Multiphysics® software.

The FSW model geometry is made up of two aluminum plates and the tool that welds them together. Thanks to the symmetry around the weld and because the rotation speed is high, it is reasonable to model only one plate. The translation of the tool can be captured by adding a convective heat flux term in the plate. This corresponds to the use of a referential that translates with the same speed as the tool. Using this referential rather than a moving heat source simplifies the model, making it a stationary convection-conduction problem that’s easier to solve. The tool has a velocity of 1.59 mm/s and rotation of 637 rev/m. 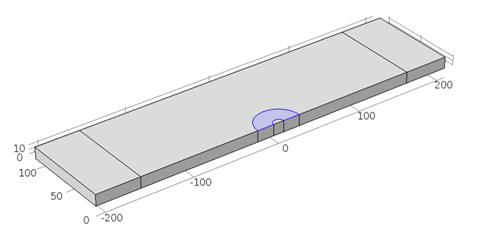 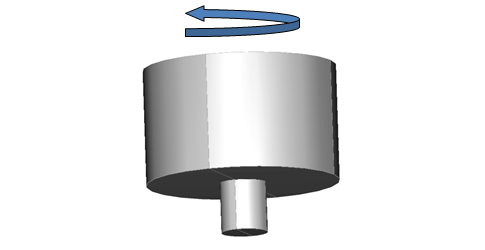 Geometry of the plate (left) and welding tool (right).

To evaluate the plate’s temperature during the FSW process, it’s important to accurately account for all three forms of heat transfer as well as friction induced by the tool. For this example, you can represent the friction between the pin and plate using a surface heat source. As the temperature increases, the metal become softer. Then, the shear stress induced by the tool (hence the friction) reduces. The effect of temperature on the aluminum properties (and thus its shear stress) can be accurately described via an interpolation function based on experimental data. 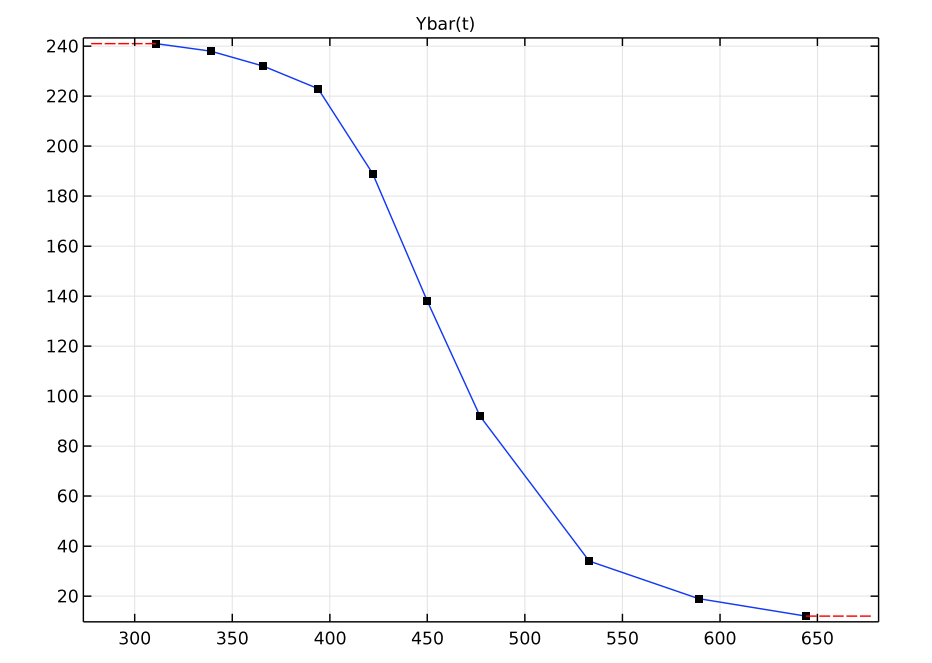 The interpolation function that defines the relationship between temperature and shear stress.

As for natural convection and surface-to-ambient radiation, both carry heat away from the plates. To model these phenomena, you can implement heat flux expressions, calculating the heat transfer coefficients using empirical values from literature.

While this is a relatively simple example, FSW is a complex process. Stirring is not accounted for here, as this involves complicated physics couplings like phase change and material flow, whereas we’re just interested in the heat transfer. In addition, the heat generation is set to zero once the temperature reaches the melting point of aluminum, since the friction between the pin and plate is pretty low after this point.

The temperature distribution in the FSW model is shown from the perspective of the rotating tool. The highest temperature is located at the point where the pin and plate touch. The hot material then moves behind the tool, while cooler material enters from the front. The results indicate that there’s no melting in the plate and show the cooling effects of the convection and radiation, which impact the quality of the weld. 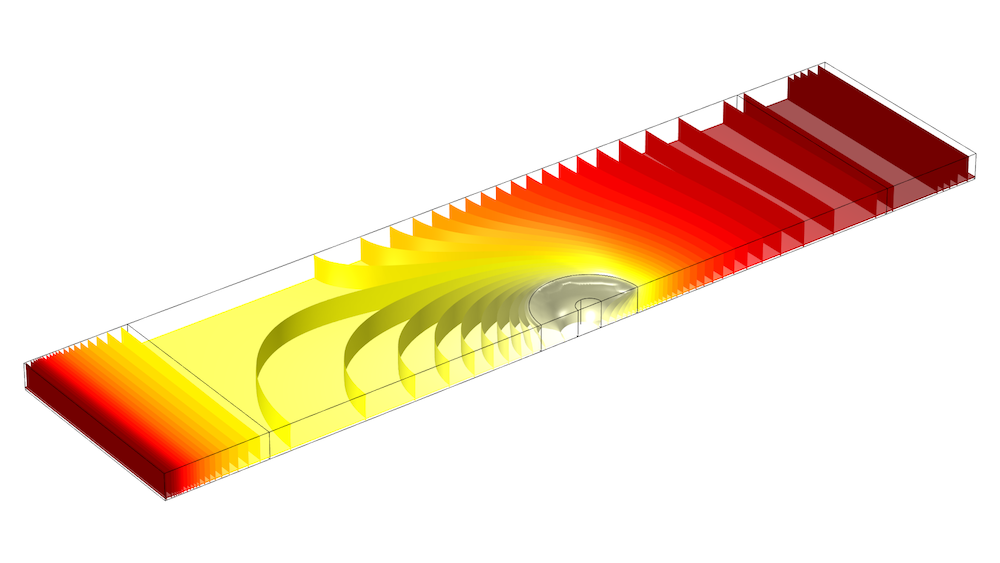 The temperature distribution in the aluminum plate.

Using a model like this one, you can analyze how the shape and speed of an FSW tool affect a plate’s temperature. By improving these aspects for a specific application, you can improve the efficiency of the overall FSW process.

Want to try this example yourself? Click the button below to go to the Application Gallery, where you can find documentation for the Friction Stir Welding of an Aluminum Plate tutorial. You can also download the MPH-files for this model.

I have read your article complete. I found it very informative and useful. So Thanks for sharing this article…