Nanorods are synthetic nanoscale objects used in the area of nanotechnology. They can be synthesized from semiconducting materials or metals, such as gold. The applications of nanorods are many, ranging from display technologies and energy harvesting to cancer therapy.

What Are Nanorods and Where Are They Used?

Nanorods do not exist in nature; they must be created via direct chemical synthesis (chemical reactions carried out with a particular end-product in mind). The elongated rod-shape is a result of a particular combination of ligands that bond to different parts of the nanorod with varying strength, allowing them to grow at different rates. Once the nanorods have been produced, they can be used in several different applications. For example, they are thought to be useful in display technologies as their reflectivity can be altered by applying an electric field that in turn changes their orientation. Another application of nanorods is in cancer therapy. In that case, the nanorods are conjugated with some tumor targeting substance and ingested by the patient. Then, the patient is exposed to infrared light, which locally heats the tumor cells containing the nanorods — and only destroys the cancerous tissue.

The use of nanorods for cancer treatment is lauded as a safer treatment option since only the cancerous tissue is destroyed, leaving the healthy tissue intact. Researchers from the Italian National Research Council presented a paper at the COMSOL Conference 2012 Milan outlining their preliminary results for designing a new concept for destroying cancer tumor tissue via hyperthermia. When designing the settings for such treatment, the authors suggest that it’s important to study the thermal effects close to the nanoparticle (nanoscale), in the vicinity, as well as in the cancerous tissue (microscale). COMSOL Multiphysics was therefore utilized to determine the diode laser irradiation parameters as well as the necessary treatment time for the design. 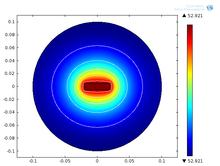 In the paper, “Laser Activated Gold Nanorods for the Photothermal Treatment of Cancer”, you can see all of their 2D temperature-dependent nano-and microscale models of the thermal effects and how they reached their conclusion. The preliminary results, they say, can be used to design experimental measurements in cells.

I want to learn how to simulation the gold nanorods heating. Would you please send comsol file above? Thanks!

Hello Duy Dinh,
The research mentioned in this blog post was shared during a User Presentation session at a past COMSOL Conference, so we do not have the MPH-file on hand. You are welcome to read their paper: http://www.comsol.com/paper/laser-activated-gold-nanorods-for-the-photothermal-treatment-of-cancer-13260