French mathematician Adrien-Marie Legendre became world-famous for his many contributions to the world of mathematics, with his works extending far beyond his country of origin. Over the course of his lifetime and career, he developed important concepts such as the Legendre transformation and Legendre polynomials, among other mathematical discoveries still in use today — including a simplified proof demonstrating that the number pi is irrational.

A Foundation in Mathematics

Adrien-Marie Legendre was born in France on September 18, 1752. There are few accounts of what Legendre’s early life was like; even his place of birth is up for debate (some say it was Paris, while others say it was Toulouse). Regardless, the soon-to-be-famous French mathematician attended Collège des Quatre-Nations (also known as the Mazarin College) and studied physics and mathematics, going on to defend his thesis in 1770.

Over the next 20 years, Legendre established himself in the field of math. He taught at the École Militaire in Paris while working on his own individual projects. In 1782, he received a prize from the Berlin Academy of Sciences for his treatise on projectiles in resistant media, which determined the curve described by projectiles such as cannonballs and bombs. In 1783, his work on celestial mechanics earned him a membership at the French Academy of Sciences, and he later became an associate for the organization. 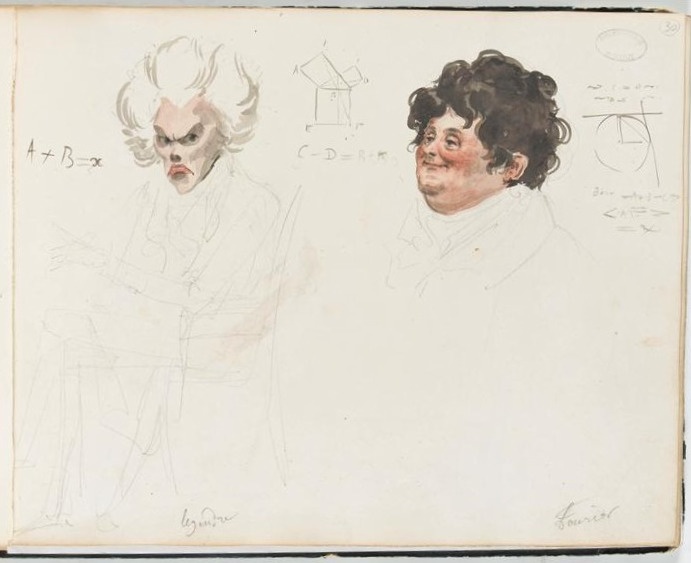 An unfinished watercolor portrait of Legendre and fellow French mathematician Joseph Fourier. This work is in the public domain in the United States, its country of origin, and other countries and areas where the copyright term is the author’s life plus 70 years or less, via Wikimedia Commons.

Around the start of the French Revolution, Legendre was part of two teams that developed important mathematical concepts for Europe. One of the teams included French astronomers Dominique, comte de Cassini and Pierre Méchain. Working with the Royal Observatory Greenwich, they developed geodic measurements connecting Paris, France, and the Greenwich observatory in London, England. Legendre worked with Cassini and Mechain again in 1791 to develop a metric system and determine the standard meter. Around the same time, he also worked individually to produce logarithmic and trigonometric tables.

Adrien-Marie Legendre During the Revolution

The French Revolution began in 1789, but did not directly impact Adrien-Marie Legendre’s life until 1793, when the Academy of Sciences closed. During this time, Legendre, who had been born to a well-off family, lost most of his wealth.

However, Legendre’s career did not come to a halt. He continued to conduct his own research, producing his first book and the work he’s best known for: the Éléments de géométrie, or Elements of Geometry. This text restructured and simplified some of the theorems presented in Euclid’s Elements, and included a simple proof demonstrating that pi is irrational, among other breakthrough concepts. The book was somewhat well-received in France and Europe, but was especially influential in the United States. It underwent numerous translations and editions — 1 translation even went through 33 editions in total!

When the Academy of Sciences reopened in 1795, Legendre returned to academic life, working as a mathematics examiner for the École Militaire and École Polytechnique over the years. When Napoleon reorganized the institute in 1803, Legendre was initially retained in the new geometry system. This was maintained until 1824, when Legendre was cut off due to a political dispute.

Elliptic Integrals and Other Works

In 1786, Adrien-Marie Legendre took up research on a subject he would become well known for: elliptical integrals. The Treatise on Elliptic Functions is considered one of his most important works. The volumes reduced elliptic integrals to three standard forms (all of which are still known by his name in modern-day math) and provided tables of values of these integrals, including how they could be used to solve specific problems.

His progressive work with integrals continued with another major work in Legendre’s “Exercices de Calcul Intégral“, a series of three volumes (released in 1811, 1817, and 1819) that delved into the basic properties of integrals, beta functions, and gamma functions.

The signature of Adrien-Marie Legendre. This work is in the public domain in the United States, via Wikimedia Commons.

Legendre also produced Nouvelles Méthodes pour la Détermination des Orbites des Comètes, which stands as the first comprehensive treatment of the method of least squares. This particular research was also an installment in Legendre’s quiet rivalry with another famous mathematician, Carl Friedrich Gauss, who made a similar discovery around the same time.

Legendre later presented his research in number theory in a series of volumes called Théorie des Nombres. In Volume 2, specifically, which came out toward the end of his life in 1830, Legendre presented a flawed proof of quadratic reciprocity, which established one of his namesakes, the Legendre symbol. This research is so important that even Carl Friedrich Gauss recognized it as the most important general result in number theory.

In addition to the above-mentioned awards and symbols named after him, Adrien-Marie Legendre has been recognized in a variety of ways. In mathematics, there are the namesake Legendre transformation and Legendre polynomials. A moon crater and main belt asteroid are also named after him, and he is among the 72 scientists with plaques on the Eiffel Tower. (It just so happens that the next version of the COMSOL Multiphysics® software will include built-in support for Legendre polynomials and associated Legendre functions!)

Further, Legendre was an honorary member of the American Academy of Arts and Sciences and the Royal Society. Although he passed away in 1833, his contributions to the field were clearly recognized then and are still remembered today through the subject of math.