Erwin Schrödinger is the man behind the famous Schrödinger wave equation that is used to predict the future behavior of a dynamic system in quantum mechanics. Today would have been Schrödinger’s birthday, had he still been alive. Let’s celebrate his birthday with a look at some of his accomplishments.

Erwin Schrödinger was born on August 12, 1887 in Vienna, Austria to parents Georgine Emilia Brenda and Rudolf Schrödinger. Schrödinger did not have any siblings and was homeschooled by private tutors until the age of 11. After that, he continued his studies at the Akademisches Gymnasium followed by the University of Vienna until 1910, when he received his PhD in physics. 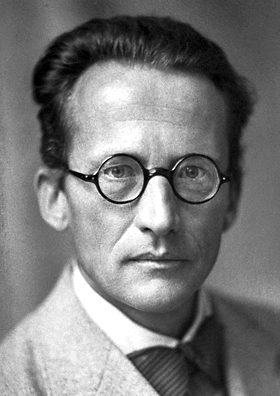 After getting his PhD, he became physicist Franz Exner’s assistant until he was drafted into the military during World War I. After the war, Schrödinger held several academic positions, climbing in rank from assistant to professor over the years. In 1933, Schrödinger accepted the Nobel Prize together with Paul Dirac for the discovery of new productive forms of atomic theory.

By the way, Schrödinger reportedly also had time to lead a rather active love life, but let’s not get into that right now. So…how about that cat?

Is the Cat Dead or Alive?

These days, it’s almost as if TV networks are required to mention Schrödinger’s thought experiment if they feature a show with a geeky character.

(Side note: “Geeky” is loosely defined here based on Hollywood’s stereotypes.)

Guy: “I don’t know if she likes me.”
Geek: “So, call her.”
Guy: “But what if she says she doesn’t like me? I can’t handle that.”
Geek: “It’s like Schrödinger’s cat.”
Guy: “What’s a cat got to do with it? I don’t get it.”
Geek: “A cat is placed inside a box together with a sealed bag of poison, which may break open at any time and kill the cat. If you don’t see the cat, you won’t know whether or not the poison has been released. Therefore, the cat can be thought of as neither dead nor alive.

If you don’t call her, she will neither dislike you nor like you, because you won’t know either way.”
Guy: “Whoa! Mind blown, dude.”

Erwin Schrödinger is immortalized through his connection to this very popular thought experiment, where the release of the poison is connected to a random single atomic decay governed by quantum mechanics. However, these references are not always accurate (Hollywood, I’m looking at you). When applied to TV shows, the punchline sounds a lot like that saying “ignorance is bliss”, but with a dark twist.

The original point of the cat being thought of as neither dead nor alive was meant to demonstrate how absurd reality could become if subatomic quantum mechanic effects are extrapolated to the macroscale. How can a cat be in an indefinite state — neither dead nor alive — just because we cannot see it? Indeed, when we’re talking about something we can see and pet, it is easy to understand the absurdity of the thought experiment. Shouldn’t it be the same for systems of nanoscopic dimensions — say, particles?

A nanoscopic single particle that travels from one point to another can behave according to the wave function, which is also experimentally shown in the famous double-slit experiment. In this experiment, particles as large as carbon-60 buckyballs can show interference patterns, until they are allowed to interact with photons (light shining on them); then they behave like macroscopic particles.

That is the analogy with the cat: One buckyball seems to be everywhere, interacting with itself, when it is not observed, but behaves like a macroscopic particle when it is observed! The fact that a particle can behave as a wave or as a particle, depending on the observation, is also referred to as the wave-particle duality.

Schrödinger is best known for his contributions to quantum mechanics, in particular the Schrödinger equation. Colin Bruce summarizes Schrödinger’s wave-theory formulation quite well in his book Schrödinger’s Rabbits the Many Worlds of Quantum. Rather than paraphrasing, I’ll give you the full effect with a direct quote from his book:

“Schrödinger’s interpretation of his wave mechanics was as simple as it was bold. His answer to the problem of wave-particle duality was that there are no particles, only waves. Just as a tsunami wave may be spread out invisibly thinly in the deep ocean, but can rise and become concentrated as it passes over shallow water, ultimately depositing most of its energy on a narrow stretch of coast, so any kind of wave can vary greatly in its physical extent. Schrödinger thought that the apparent particles of radiation and matter were merely manifestations of waves squeezed to an extreme degree — as when a water wave focused by the shape of an estuary rears up to a sudden peak and expends all its energy in knocking down a tall lighthouse, for example.” (Bruce, C. (2004). Schrödinger’s rabbits the many worlds of quantum (p. 58). Washington, DC: Joseph Henry Press.)

Schrödinger also published several books, perhaps most notably What Is Life?, a book that inspired James Watson and Francis Crick to eventually discover the DNA double-helix formation. Other titles include Nature and the Greeks; Mind and Matter; and Science, Theory, and Man, to name a few. Throughout his work, it’s clear that Schrödinger was very interested in philosophy, not just physics and math.

Nice post and tribute. Schrodinger’s book What Is Life? proposed a revolutionary insight into the nature of life as transient pockets of negentropy in an otherwise entropic universe. Later other writers connected the view of entropy as information to Schrodinger’s insight and thus life can be viewed at transient pockets of organization in an otherwise increasingly disordered universe. The book is still readable today.

Another thing to note is that a canonical Wave Equation can be added in COMSOL under the “Mathematics/Classical PDEs” node.