Gustave-Gaspard Coriolis was a French physicist with a passion for mechanics. He spent much of his time contemplating the nature of movement in machinery and introduced the concept of kinetic energy in relation to work. When he extended these ideas to rotating machinery, his sphere of influence grew: The Coriolis force and subsequent Coriolis effect are observed in rotating systems with applications in engineering, meteorology, stellar dynamics, and more.

Putting in the “Work” for the Field of Mechanics

Gustave-Gaspard Coriolis was born on May 21, 1792, in Paris, France. While little is known about his childhood, he was clearly a studious young man: In 1808, he took the entrance exam to École Polytechnique and placed second out of all of the entering students. Later, he was an assistant instructor at the school and made strides in advancing friction and hydraulics. Eventually, Coriolis became a mechanics professor at École Polytechnique, where he stayed until 1838. 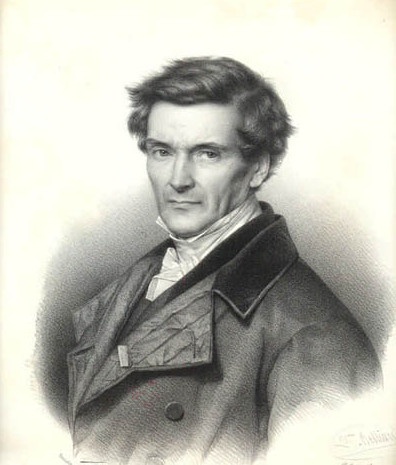 Portrait of Gustave-Gaspard Coriolis. Image in the public domain in the United States, via Wikimedia Commons.

During his years as a teacher, Coriolis wrote a textbook, Du calcul de l’effet des machines, in which he explained how to calculate mechanical action. In this text, he adapted theoretical principles and demonstrated how they could be applied in mechanics across various industries. It was in this book that Coriolis also introduced the terms work and kinetic energy in their modern scientific context — work being the transfer of energy by a force acting through a distance and kinetic energy being an object or particle that possesses energy because it is in motion.

Coriolis suggested that if you perform work by applying a net force on an object, the object speeds up and gains kinetic energy, which depends on both the motion and mass of the object. He gave the correct expression for kinetic energy as 1/2 mv2, where m is the mass and v is the velocity.

The Coriolis Force and Effect in Rotating Systems

After establishing ideas about work and kinetic energy, Gustave-Gaspard Coriolis began to think about how they relate to movements like rotations. He explained some of these ideas in an 1832 paper about the transfer of kinetic energy in rotating machines, then in a famous paper a few years later, Sur les équations du mouvement relatif des systèmes de corps.

In his famous paper, Gustave-Gaspard Coriolis acknowledged the general effects of motion on a body on a rotating surface, but showed that there is an additional, inertial force that acts on the body at a 90° angle to the direction of motion. Usually, the body’s path would be straight, but due to this inertial force, the path curves instead. He said that this force, known as the Coriolis force, must be included in the equations of motion.

Initially, Coriolis connected these ideas with rotating machinery, specifically how energy is transferred in waterwheels. However, they became associated with other scientific fields as time went on, with applications in astrophysics and meteorology. Among the stars, the Coriolis force determines the directions of rotation in sunspots. On Earth, the Coriolis force influences wind directions and the rotation of storms, hurricanes, and tornadoes. This force not only affects atmosphere but also the rotation of ocean currents. 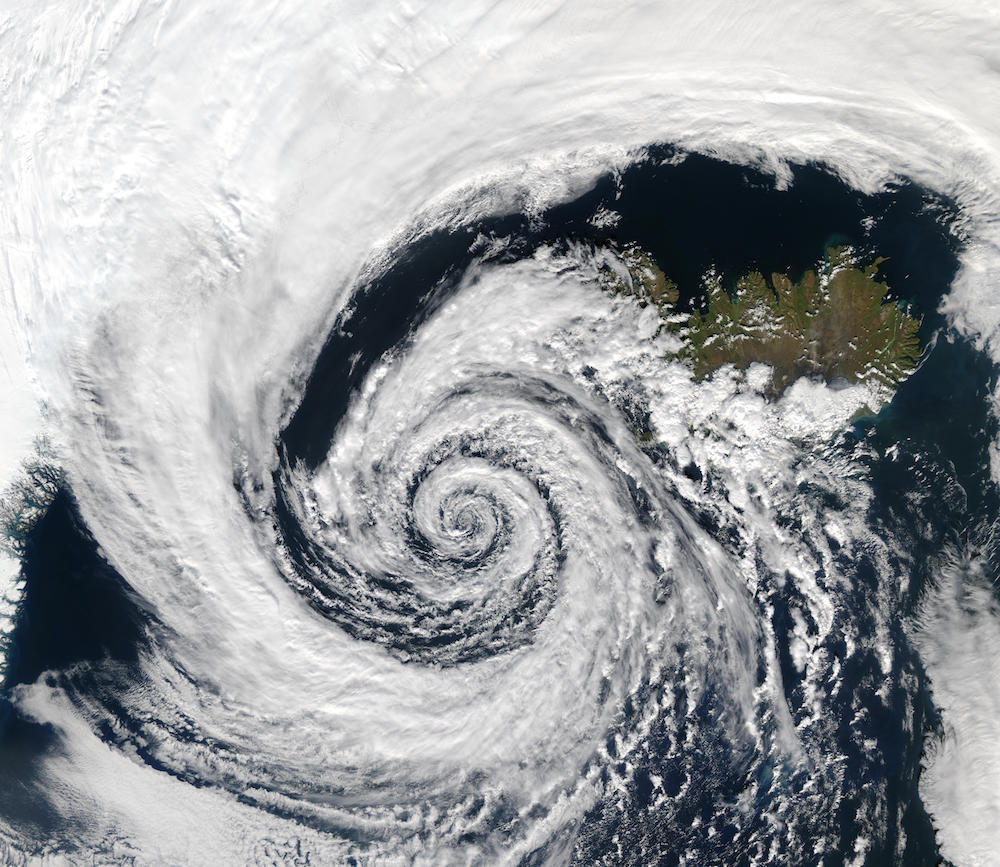 A low-pressure system demonstrates the Coriolis force in the Northern Hemisphere, manifesting in a counterclockwise direction of movement. Image in the public domain in the United States, via Wikimedia Commons.

The Coriolis force has an interesting effect, which occurs when there is an apparent deflection of the path of an object in a rotating coordinate system. In actuality, the object doesn’t deviate from the path — it only appears to do so because of the rotating motion of the system.

The rotating reference frame for the Coriolis effect is most often associated with the earth. Because the earth spins, completing one rotation per day, scientists must account for this force when analyzing the motion of objects. You can observe the Coriolis effect most noticeably in the path of an object moving longitudinally and for larger movements such as wind patterns and ocean water. The reason this deviation is so apparent along Earth’s longitude is because it rotates toward the east, and the tangential velocity has to do with latitude, since it’s close to zero at the poles and reaches maximum velocity at the equator. (Tip: Check out a PBS Nova video showing the Coriolis effect in action.)

After introducing major ideas about motion and energy, Gustave-Gaspard Coriolis was recognized for his achievements. In 1836, he became the mechanics chair at École des Ponts ParisTech (formerly called École Nationale des Ponts et Chaussées) and was inducted into the French Academy of Sciences. Two years later, he was appointed the director of studies at École Polytechnique. (In contrast to his other works, Coriolis also published research about the physics of billiards, in which he detailed a method for aiming massé shots!)

In 1844, the Coriolis effect and other mechanical principles were published posthumously in a collection called Traité de la mécanique des corps solides. Because his ideas and equations are so important in many areas of science, Coriolis received a great honor: You’ll find his name as one of only 72 names engraved on the Eiffel Tower (Jean-Charles de Borda is also among those listed). Today, let’s wish Gustave-Gaspard Coriolis a happy birthday!