Until the 20th century, the idea of a mechanical beast with wings transporting humans thousands of miles seemed like a fantasy. However, one great thinker, Samuel P. Langley, was determined to turn this vision into reality and give people the ability to fly. This progressive scientist went on to build the first heavier-than-air plane to attain sustained flight, create the bolometer, and establish standardized time.

A Boy with His Head in the Clouds

Born on August 22, 1834, in Roxbury (part of Boston, Massachusetts), Samuel Pierpont Langley was fascinated by the way the world worked from a young age. He was passionate about astronomy, physics, and aeronautics and was educated at the Boston Latin School and The English High School of Boston. 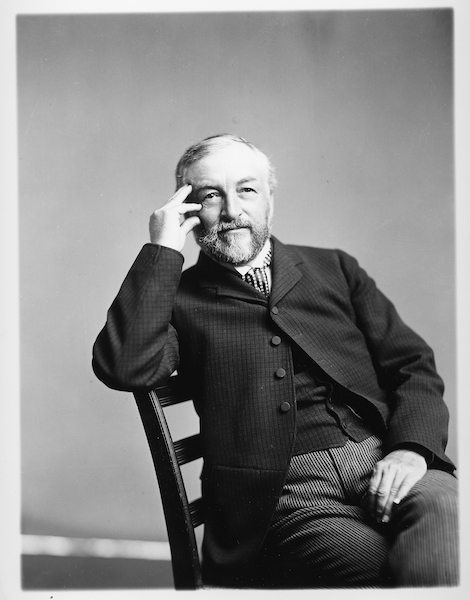 A portrait of Samuel P. Langley. Image by Smithsonian Institution; credited to Langley himself by their archive — Smithsonian Institution Archives, Record Unit 95, Box 15, Folder 8. This work is in the public domain in the United States because it is a work prepared by an officer or employee of the United States Government as part of that person’s official duties under the terms of Title 17, Chapter 1, Section 105 of the US Code. Image via Wikimedia Commons.

Deciding not to attend to college (a popular decision at the time), Langley advanced into a career in engineering and architectural draftsmanship, where he created technical drawings and outlines. In this role, his creativity first started to shine.

Making the Transition from Outlines to Outer Space

Around 10 years after he first started working as an engineer and architect, Samuel P. Langley immersed himself in mathematics and physics. He was accepted as an assistant professor of mathematics at the U.S. Naval Academy in 1866. One theory is that he was not hired to teach, but rather to revive the academy’s observatory.

Just one year later, Langley joined the Western University of Pennsylvania (now the University of Pittsburgh) as a professor of physics and astronomy. With a keen interest in observatories, he eventually became the director of the university’s Allegheny Observatory. He accomplished a lot for the facility, not only upgrading the severely outdated equipment inventory but also inventing astronomical contraptions like the star-trajectory telescope.

Langley used most of his time in the observatory to study the Sun. Using his exceptional artistic ability, he drew hundreds of solar phenomena. People were transfixed; having never seen such detailed images of celestial occurrences. 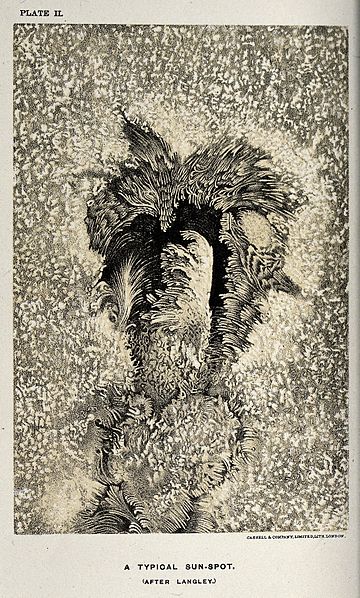 One of Langley’s illustrations. Image by Wellcome Collection; licensed under CC BY 4.0 via Wellcome Library.

Samuel P. Langley created numerous inventions that advanced both astronomical and physical sciences while at the Allegheny Observatory. One of his first and most notable inventions is the bolometer. Langley’s invention, still commonly used by scientists today, absorbs radiation and detects minute temperature changes of up to 1/100,000th of a degree Celsius. Initially intended to calculate far-infrared radiation, the bolometer enabled the amount of solar energy on Earth to be measured.

The bolometer was central in providing the first research into climate change. The device measures how carbon dioxide in the atmosphere interferes with infrared radiation and how doubling this carbon dioxide will alter climates worldwide.

About Time for Standardized Time

Samuel P. Langley would not have been able to accomplish all that he did without funding. At one point, the Allegheny Observatory lacked the money Langley needed to accomplish all of his research goals. Creativity struck when he had the idea to address the issue of standardized time.

Up until the late 1800s, time was “guesstimated” and people arrived at places in the general span of the assigned start time. This system worked…until people’s lives were on the line. The inaccurate nature of time proved detrimental for the train system: If trains were just a minute off from the actual time, which was occasionally provided by the government, two trains could end up on the same track at once, resulting in a collision.

Recognizing this problem, Langley used observations from a telescope he invented to create a precise system of standardized time, complete with time zones. Beginning in 1868, he proceeded to deliver the actual time twice a day to every railroad in the United States and Canada, spreading across thousands of miles.

The Allegheny Time System, as it came to be known, paved the way for the Standard Time System we use today. The U.S. Naval Observatory started providing time for the world on November 18, 1883, and everyone in the U.S. and Canada was able to set their clocks to the assigned time. 24 worldwide time zones were later established, including the 4 U.S. zones enacted in the 1918 Standard Time Act. 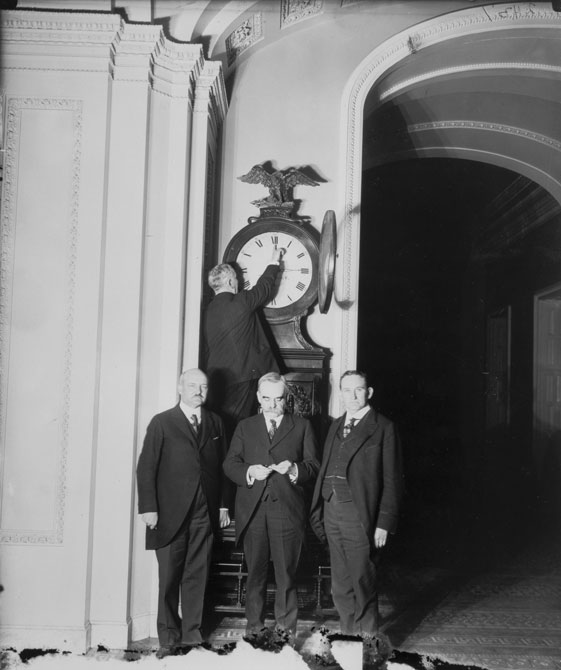 People across the country shifted their clocks for the first time in November of 1883. Since then, parts of the world adjust the time twice per year to observe Daylight Savings Time, as shown here. This work is in the public domain in the United States because it is a work prepared by an officer or employee of the United States Government as part of that person’s official duties under the terms of Title 17, Chapter 1, Section 105 of the US Code. Image via Wikimedia Commons.

Samuel P. Langley once said that he dreamed of flying for “as long as I can remember anything.” This dream was set into motion when Langley became the third secretary of the Smithsonian Institution in 1887. The foundation granted him $70,000 to successfully construct an airplane that could hold passengers.

Langley first executed trials using rubber-band-powered planes and discovered that the faster the plane flew, the less propulsive power it needed (known as induced drag). This allowed Langley to create the first unpiloted plane (of respectable size) that was heavier than air. The Aerodrome Number 6 maintained flight for 1500 meters. 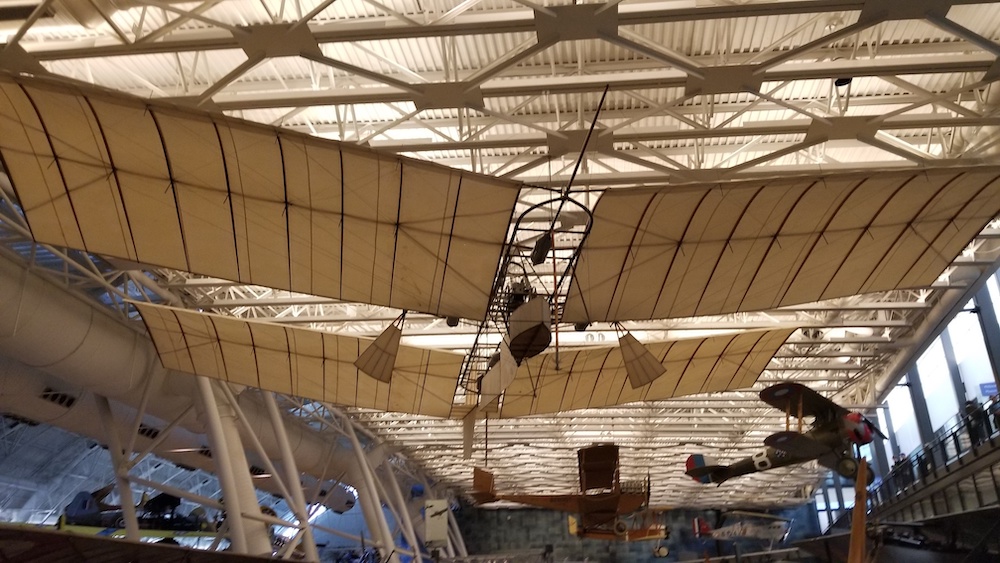 One of Langley’s aerodromes. Image courtesy David Paulus — Own work.

Taking advantage of the tranquil air over the Potomac River, Langley stepped up his game and trialed two test runs of piloted aircraft in 1903. Both tests ended in failure, but not fatality. His tandem-winged design aimed to demonstrate that the sustained flight of a piloted machine was possible by maintaining lift after being catapulted off a boat. However, in the first trial, the plane was hooked and derailed by the side of the catapult, and in the second trial, it completely disintegrated at liftoff.

Samuel Langley is remembered for his numerous accolades and contributions to science. Standardized time changed the world’s efficiency for good, and although Langley’s tandem plane was not successful, Glenn Curtiss built on his design, leading to a successful piloted flight in 1914.

For his work, Langley received many awards, including the Rumford Medal, Henry Draper Medal, Rumford Prize, and John Scott Legacy Medal and Premium. He is also honored by name in numerous places, including the NASA Langley Research Center, Langley Air Force Base, and Mount Langley in the Sierra Nevada mountains.

An Homage to Stephen Hawking