In the highly competitive world of professional cricket, every swing is important. To deliver powerful shots, a batsman needs a well-designed bat and knowledge of how to best use it. One way to improve a player’s batting skills, and perhaps design better bats, is to locate their so-called “sweet spots”. A research team from the University of the West Indies achieved this by performing a structural analysis with the COMSOL Multiphysics® software.

Cricket Bats: A Key Element to a Successful Swing

Imagine a cricket ball sailing through the air at around 145 km/h (90 mph). A batsman stands ready, bat in hand. In the brief moment before the ball arrives, the player is most likely thinking of how to best hit a shot. There are many ways for the cricket ball to connect with the bat, but if a batsman knows the location of a sweet spot, he or she may be able to deliver a better shot by taking advantage of an optimal zone that enables maximum stroke power with the least amount of effort. 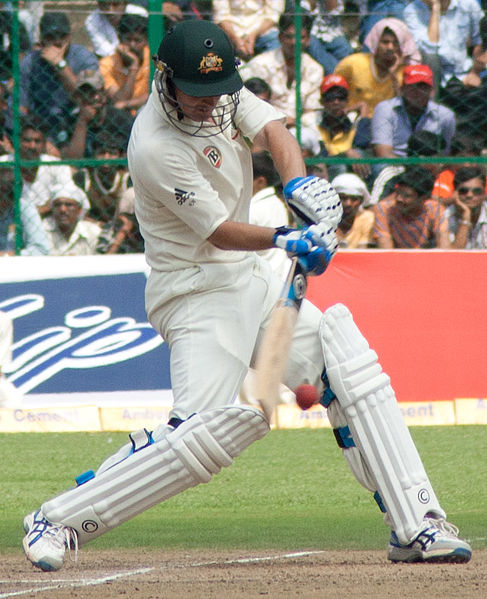 A batsman during a cricket game aiming his shot to hit the sweet spot of the bat. Image by Pulkit Sinha — Own work. Licensed under CC BY-SA 2.0, via Flickr Creative Commons.

Current research on the physics and science behind the game of cricket centers on the performance of the batsmen and bowlers. In fact, we’ve even covered this topic before in a blog post highlighting swing bowling techniques. However, one area of cricket that seems to lack in research is the cricket bat itself. For instance, a structural mechanics analysis can help to find sweet spots in a bat’s design that can improve the quality of the batter’s shots. 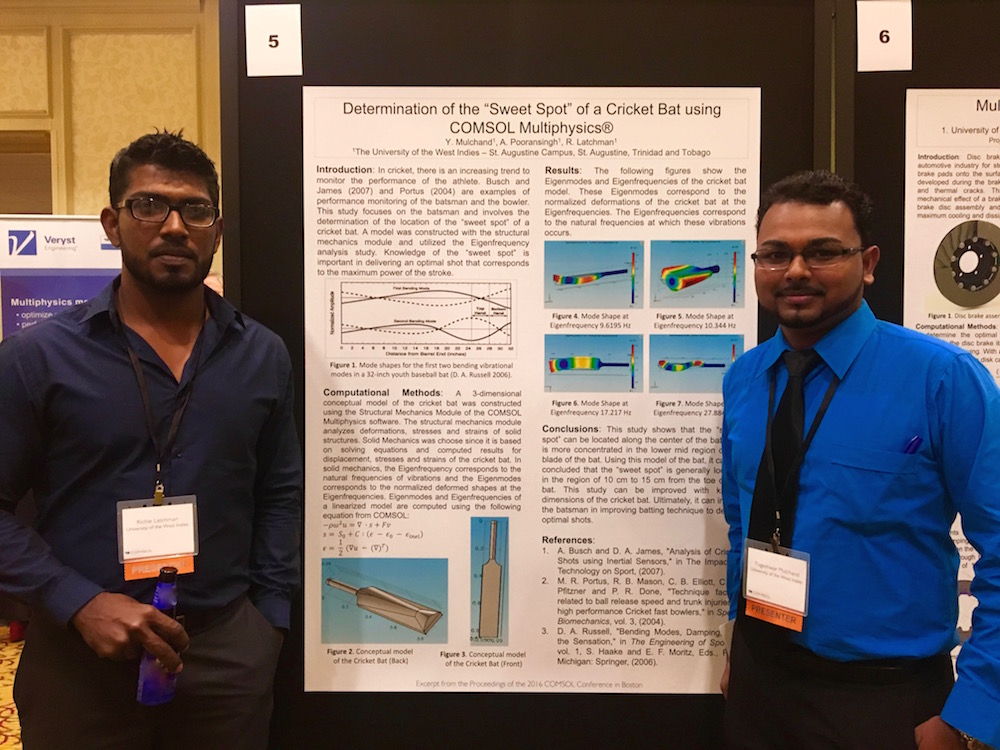 Richie Latchman (left) and Yogeshwar Mulchand (right) in front of their poster “Determination of the “Sweet Spot” of a Cricket Bat using COMSOL Multiphysics®“.

Researchers from the University of the West Indies, St. Augustine took a swing at this challenge by using COMSOL Multiphysics to investigate the sweet spots in a cricket bat. This research is useful not only for players and coaches, but also for sporting equipment companies, where simulation is used to analyze sporting goods.

Finding the Sweet Spots in a Cricket Bat with Structural Analysis

To start, let’s delve into the physics behind cricket bats. The bending modes of a bat are the main vibrational modes affecting its performance. While a freely supported bat has several bending modes of vibration, a handheld bat can be seen as a clamped cantilever beam.

A bat’s first two bending modes are important to its performance, and between them is a “sweet zone” distinguished by its minimal vibrations and energy loss. This information comes from research by D. A. Russell (Ref. 6 and Ref. 11 in the research paper).

In a typical cricket bat, the handle is most sensitive to strain when a ball is played. According to research by Jones (Ref. 14 in the research paper), the thicker edge has increased durability. Further, the area with more wood behind the blade, the swell position, yields better rebounding qualities and transfers greater force to a struck ball. It follows that the sweet spot could be located above this wider area of the bat. 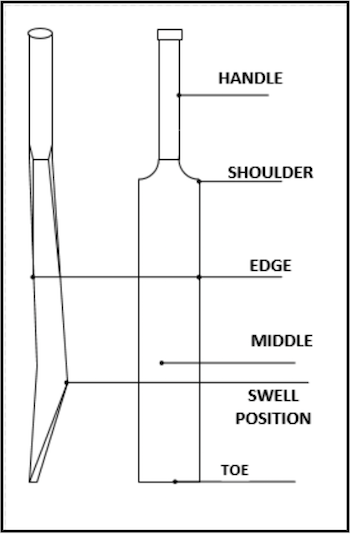 Schematic of a cricket bat. Image by Y. Mulchand, A. Pooransingh, and R. Latchman and taken from their COMSOL Conference 2016 Boston paper.

For their studies, the research team defined a sweet spot as the bat position in which the maximum energy is conveyed with the least amount of vibration. Note that there are other ways the term “sweet spot” can be defined for sporting equipment.

Setting Up a Model of a Cricket Bat

At the core of the team’s research is a 3D model of a common willow cricket bat. They selected the Kingwood material in COMSOL Multiphysics to account for the willow wood that is used to make cricket bats. The team added further parameters to the material based on their research into willow wood. The bat was also modeled as a free object in all areas except for the handle, which was fixed in space. 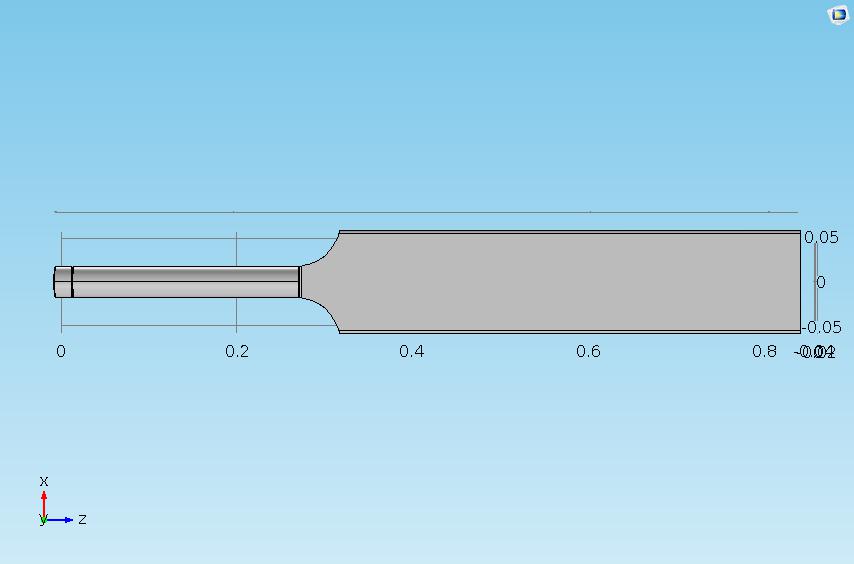 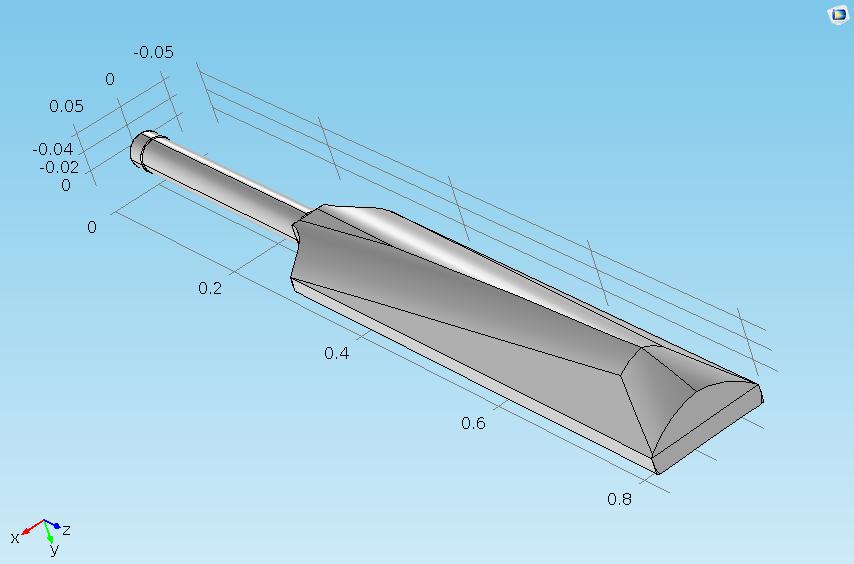 The front (top image) and back (bottom image) of a 3D cricket bat model constructed in COMSOL Multiphysics. Images by Y. Mulchand, A. Pooransingh, and R. Latchman and taken from their COMSOL Conference 2016 Boston paper.

The researchers used the Structural Mechanics Module to analyze the deformations as well as stresses and strains in the solid structures. They also performed an eigenfrequency analysis to discover the natural frequencies of vibration and the related mode shapes of the bat.

Taking a Look at the Results

Through this work, the team found the cricket bat’s first six mode shapes, eigenmodes, and eigenfrequencies, as shown in the images below. In their results, the color bar indicates displacement from the bat’s natural position. Here, red shows a large movement and blue represents a lack of vibration when the bat is in its rest position at the specified frequency. 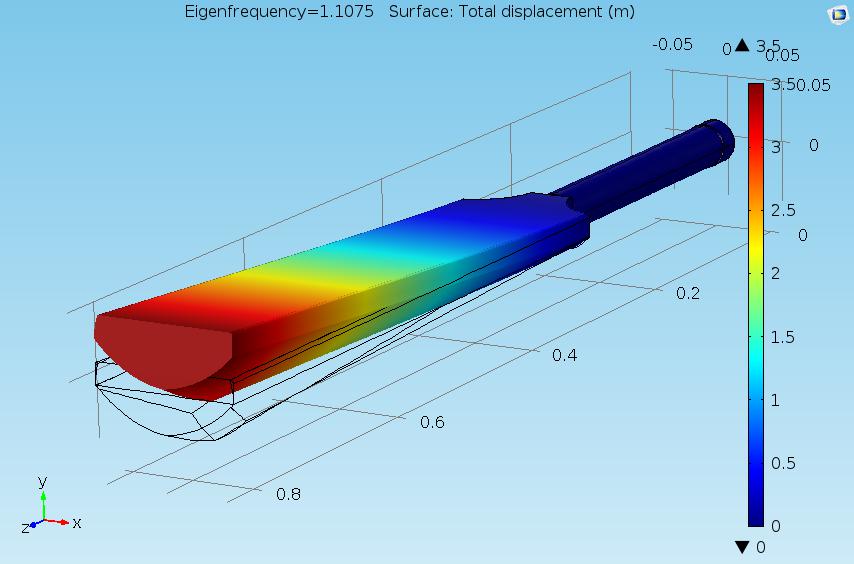 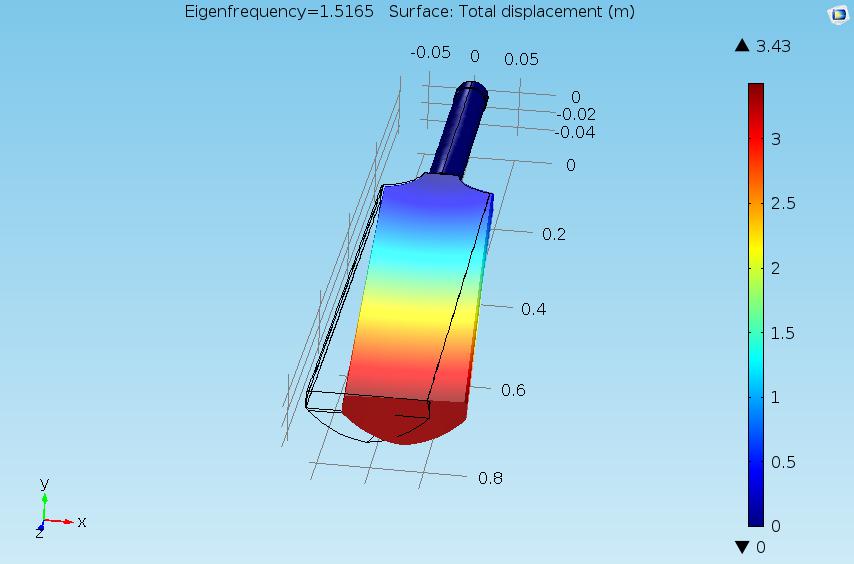 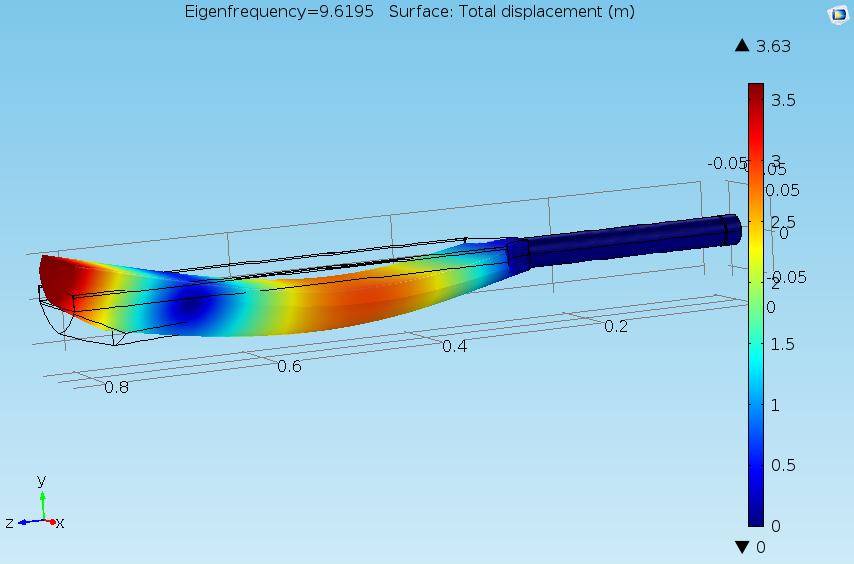 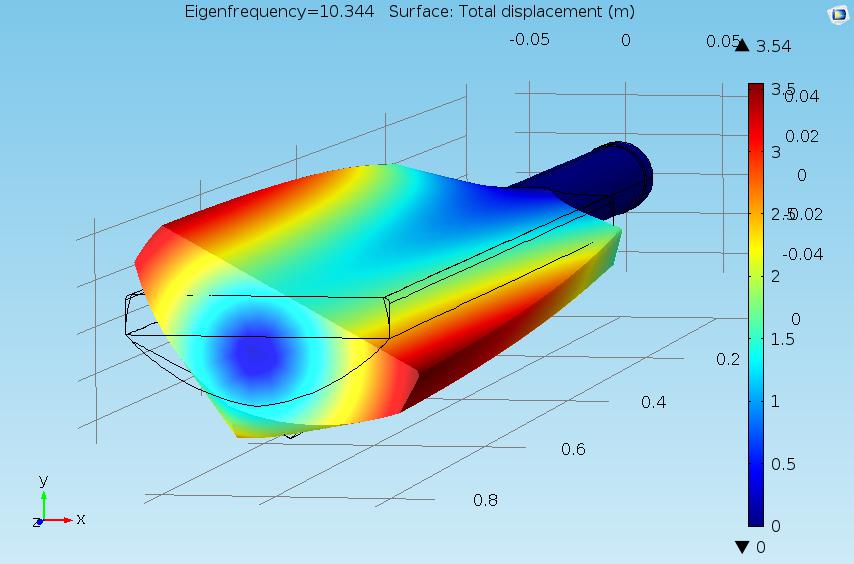 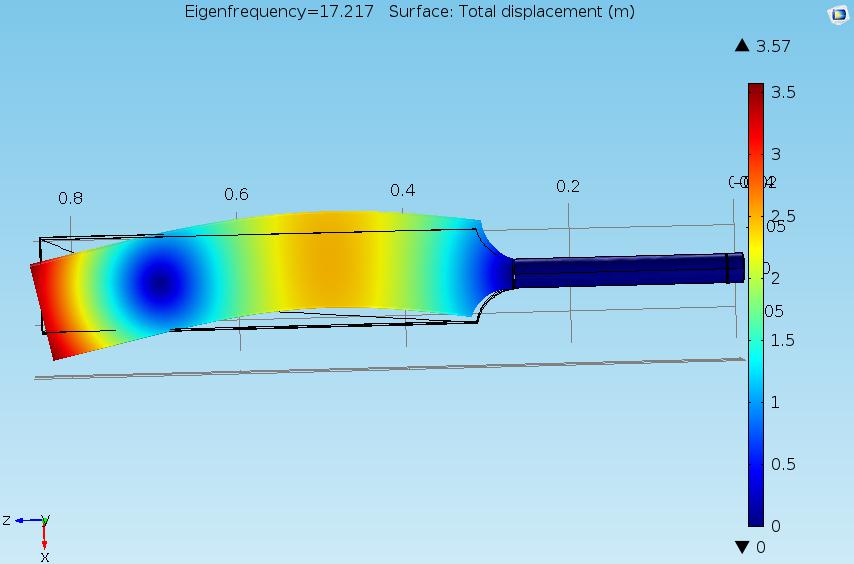 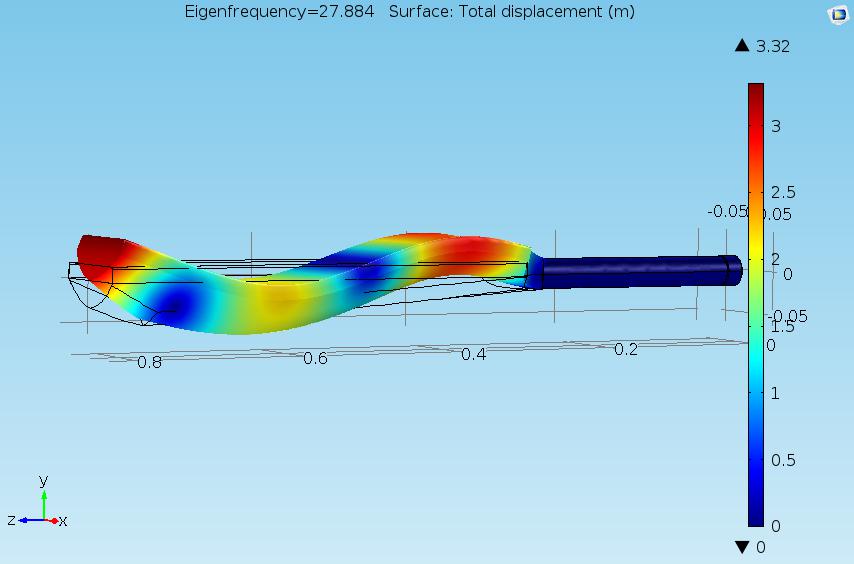 The eigenfrequencies of the cricket bat at the different mode shapes.

When observing the simulation results, note that the researchers assumed that the cricket bat model has the exact same dimensions and material properties as an actual cricket bat. They also didn’t consider the bat’s age. While the sweet spot locations are determined solely by the geometry used, changes in the material data will affect the model’s natural frequencies.

Based on the results of the research team, there is a sweet spot located in the middle of the bat that is concentrated at the lower-mid area, 10 to 15 cm from the bat’s toe. There is another sweet zone 20 cm from the handle’s base, where the handle connects to the shoulder.

As for if these results can help you improve your cricket stroke, you’ll find out when you take a shot.