In the Spotlight: Conserving and Restoring Art with Light

Conserving and restoring art requires a balance between maintaining the quality of the work and respecting the artist’s initial creation. Advancing technologies now offer less invasive ways of analyzing artwork and bringing pieces back to their original condition. Since 2015 is the Year of Light, let’s explore how light can be used to conserve and restore paintings.

The Aging of Paintings

The fine details of a painting are what make its story, from the shape of a smile to the color of a sunset. These elements not only add to the painting’s beauty and appeal, but they also enhance the depth and feeling of the artwork. As part of the natural aging process, these intricate details can sometimes lose their clarity and brilliance over time. 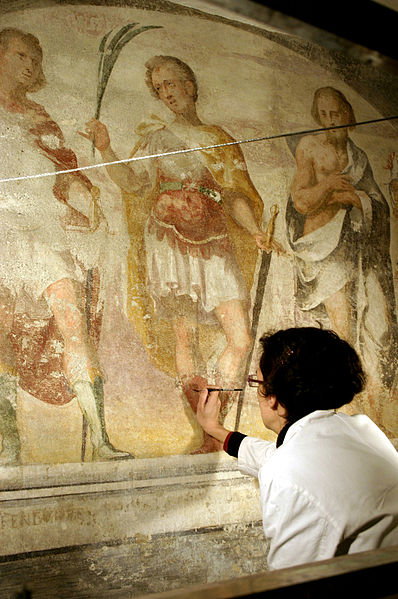 A woman painting gaps in damaged frescoes. (Image by G.dallorto — Own work, via Wikimedia Commons.)

A painting’s environment has an important impact on how the art ages. For one, the accumulation of dust and grime on a painting’s surface can affect the artwork’s overall tone. Meanwhile, exposure to sunlight can cause certain pigments to fade if they are particularly sensitive to light. When considering the effect of environmental factors and how to address them, it is important to also look at the science behind the materials used in the painting.

Take Vincent van Gogh’s Sunflowers, for example. In his series of paintings, it was observed that the once yellow hue of the sunflowers was turning brown. Using an X-ray machine and paint samples, researchers discovered that this effect was due to the addition of white powders to the yellow paint. This was a tactic used by van Gogh to brighten the yellow hue. When exposed to sunlight, the sulfate-based powders set off a photochemical reaction that caused nature to exert the reverse effect on the painting, darkening their color. 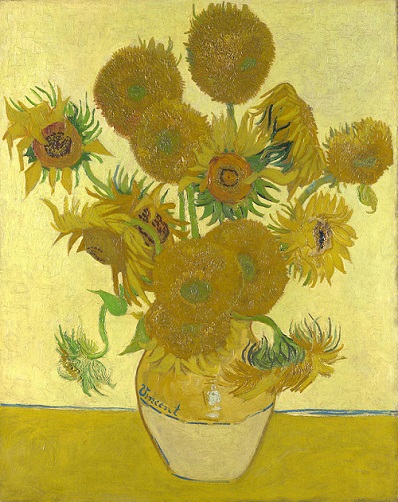 From the Sunflowers series by Vincent van Gogh.

A stronger understanding of the chemistry behind a painting can be a powerful tool in establishing new methods for preserving paintings as well as restoring their quality. New lighting technologies have provided less invasive methods of studying and restoring artwork, helping to revitalize paintings while honoring the author’s original intent.

Light Offers a Noninvasive Method for Preserving and Restoring Art

A laser originally designed to study melanoma was adapted for use in analyzing the different colors and layers of paintings. A research team from Duke University used a pump-probe laser to generate cross sections of the artwork, revealing the types of pigments that were used and how they were layered.

In this technique, pulses of light caused electrons within a sample to be pumped into higher states of energy. These initial pulses were followed by a second set of pulses that examined how the electrons came back to their states of lower energy. In addition to offering insight into the best treatment methods, this imaging technique also helps identify the artwork’s historical nature — all without causing any damage to the painting itself.

In 1962, the American painter Mark Rothko produced a series of paintings for Harvard University, five of which were installed in the university’s Holyoke Center. Exposure to light gradually caused extensive fading in the paintings. Conservators attributed this fading to a pigment known as Lithol Red, a color that was used in all of Rothko’s murals and was found to be quite sensitive to light. After decades in storage, a team from the Harvard Art Museums and a research group from the MIT Media Lab collaborated to restore these paintings virtually.

The team first tracked down colored photographs of the murals that were taken in 1964 in which fading was also evident. These photographs were digitally restored and color measurements were taken from a sixth mural that had been painted for the installation but was never displayed. The information from this analysis was used to create a “compensation image” that isolated the colors pixel-by-pixel. The image was then sent to a digital projector, which filled in the colored gaps of the mural with light. In this sense, the quality of the murals was restored to the eyes of viewers without the touch of the human hand.