The 3D knowledge of complex geological structures and their integration into hydrogeological models is a prerequisite to study the dynamics of hydraulic processes at different scales. This blog post describes different challenges in the process of the integration of such structures from 3D geological modeling software into a numerical groundwater flow model in the COMSOL Multiphysics® software.

For groundwater modeling, a large number of specialized software packages are on the market. Many of them employ structured meshes and require the geology to be built from a fixed number of layers in the z direction present throughout the whole geological model. However, in complex geological structures on a kilometer scale, fault zones may be present at arbitrary angles. The key motivation to use the COMSOL® software, despite the fact that it is still not widely used for groundwater problems, is its ability to import more complex geometries, work with unstructured meshes, and treat fault zones as hydraulic fractures.

Geological 3D modeling is increasingly being used to better understand spatial structural relationships. Figure 1 shows a geological model on a regional scale (approximately 4 km x 4 km) in the Swiss Jura Mountains. The main goal of the project is to study the influence of a (planned) tunnel on the groundwater circulation with regard to frequent anhydrite bearing horizons in this region, and the possible problems of swelling during the transformation of anhydrite into gypsum. 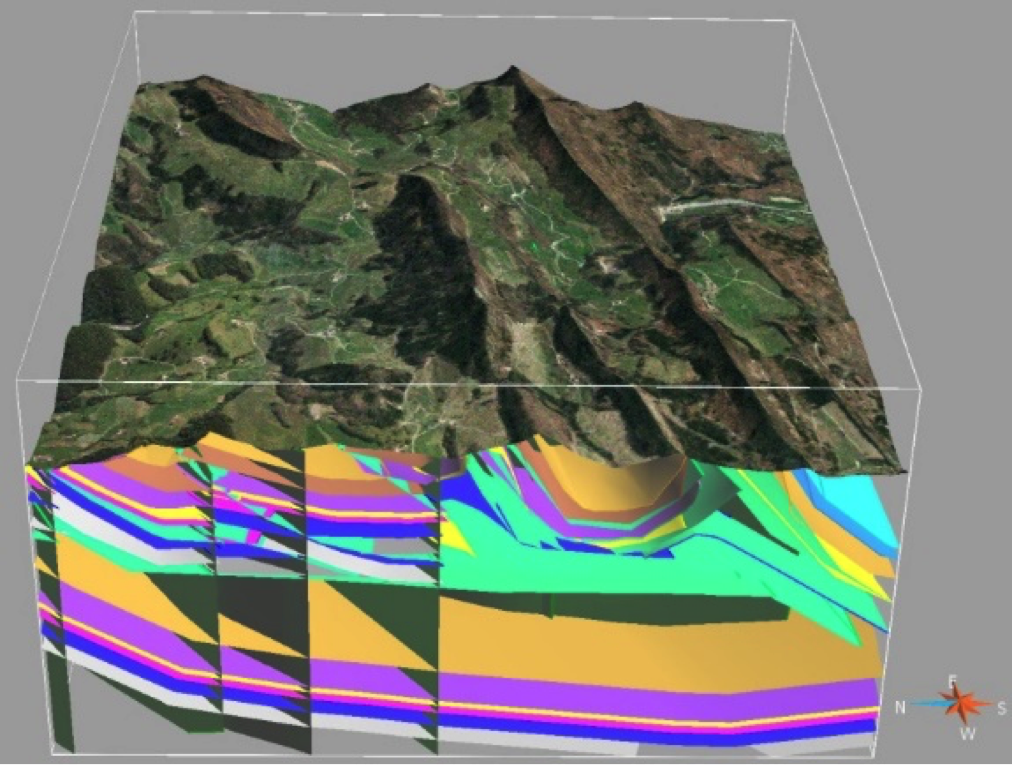 Figure 1: Complex geological 3D model (in GOCAD® software) with an extension of 4 km x 4 km. After import of this model into COMSOL Multiphysics, it results in 37 domains and 386 surfaces.

The starting point of the COMSOL® groundwater model was a regional-scale structural geological 3D model prepared in the GOCAD® geological modeling software. The different geological surfaces were then transferred to COMSOL Multiphysics. Our first attempt to base the transfer of the geometries between the two software on DXF™ or STL files resulted in complications in later processing steps. We therefore adopted a specific strategy that allowed us to import complex geological models: 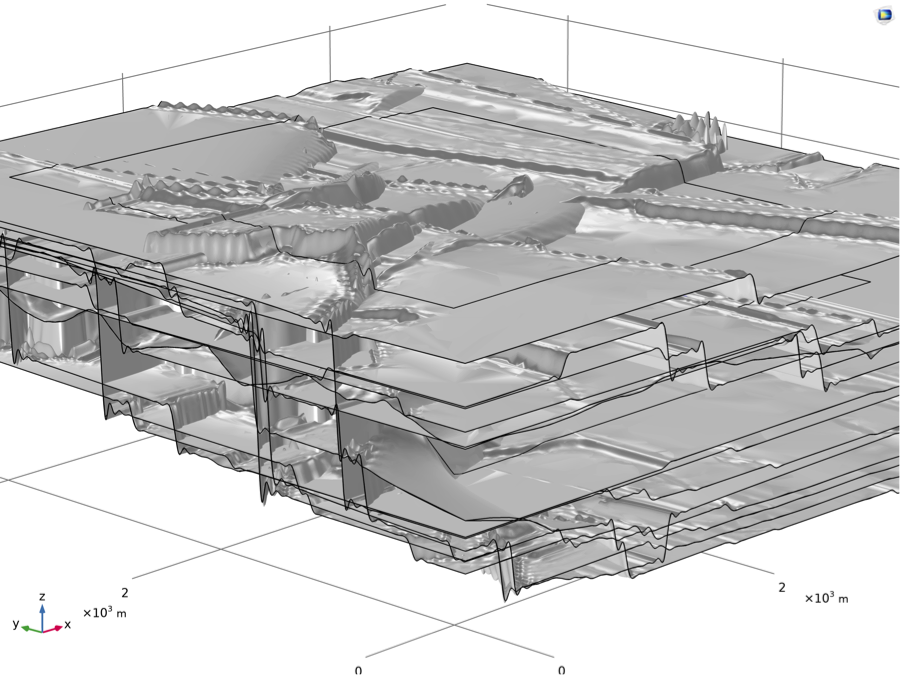 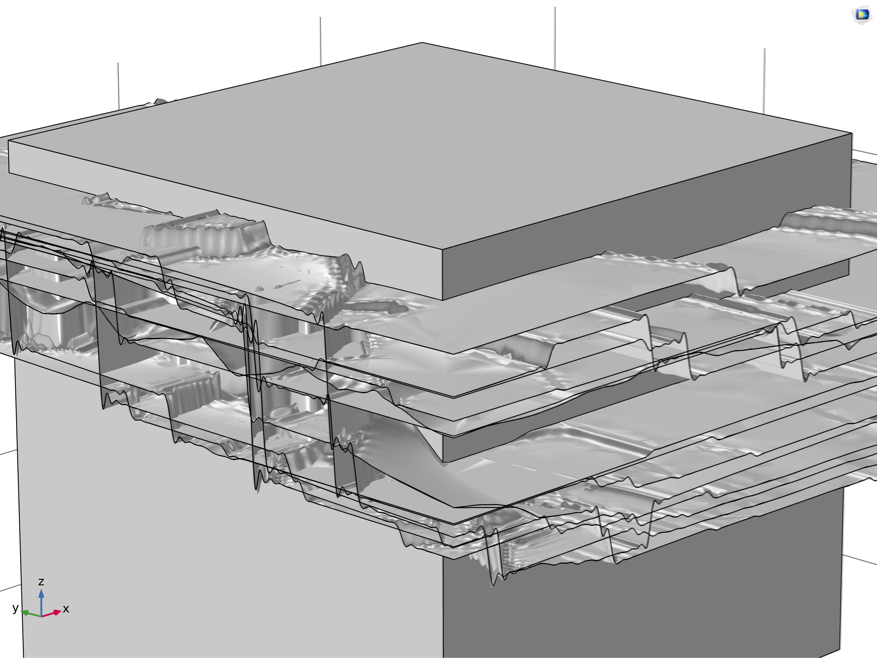 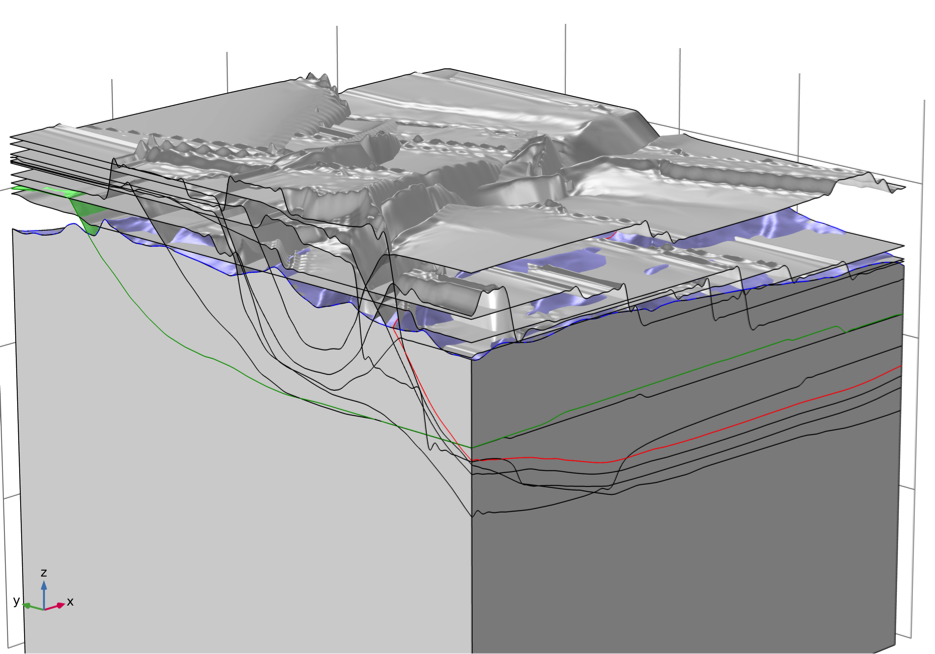 After creating the model geometries, a tunnel system consisting of three tunnel tubes, as well as connecting and ventilation shafts, is incorporated into the COMSOL model. In Figure 4, the tunnel and a local model perimeter (to study a specific tunnel section) are highlighted in blue. 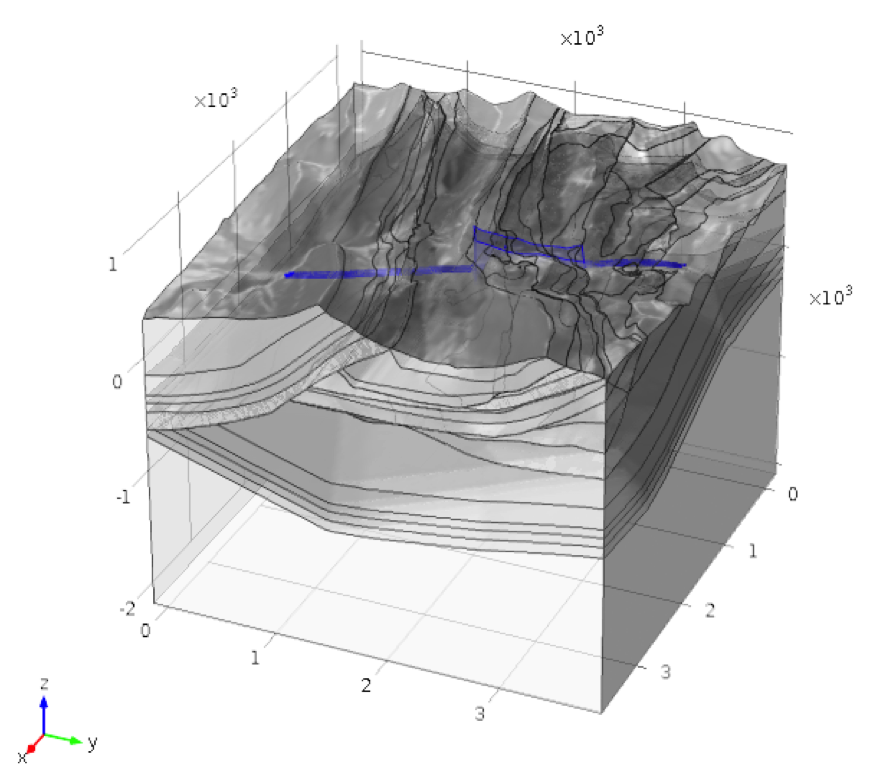 Figure 4: Resulting model geometry (the model can then be cut along a topographic ridge to better define boundary conditions) with the integrated tunnel and local model perimeter (highlighted in blue).

Setup of the Numerical Model

The sequence of aquitard and aquifer geometries in the large-scale area controls the groundwater circulation driven by gravity. The large-scale distribution of hydraulic potentials is directly dependent on the topography. Fig. 5 illustrates how the respective stratigraphic information is combined into hydraulically similar units. 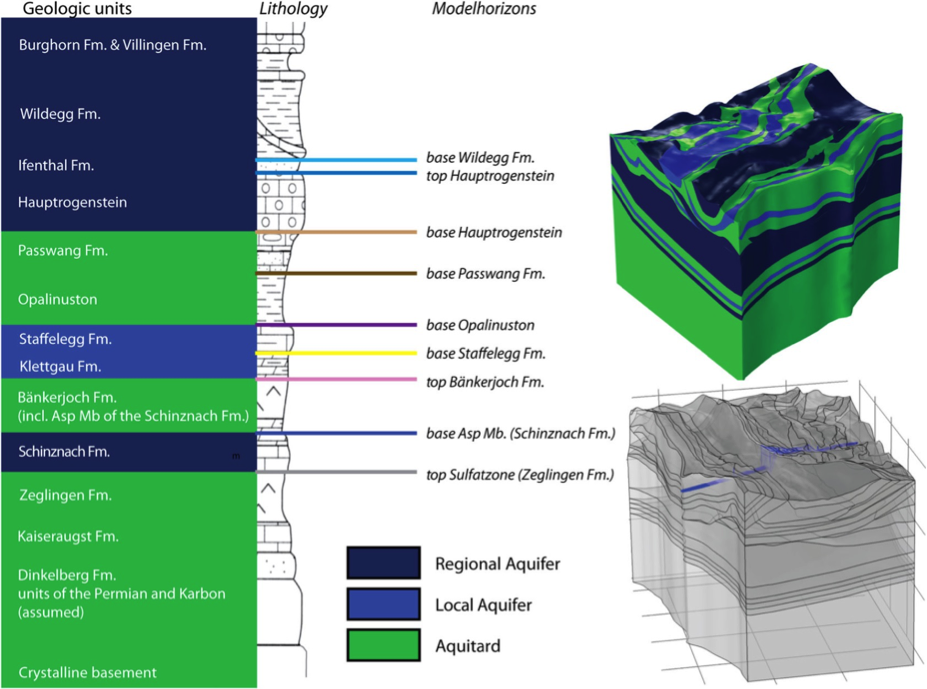 The influence of the progression of aquifer, aquitard, and the tunnel geometries is visualized by the change of flow direction arrows (Fig. 6). The simplification of the geological model by grouping the geological units into regional and local aquifers as well as aquitards requires focus on the major hydraulic aspects of the different lithological units. Nevertheless, it is possible to obtain valuable basic information from the regional model, which could be adapted in the future with an improved data basis from monitoring data. The integration of complex geological information into numerical groundwater flow models enables us to visualize and calculate the groundwater circulation in 3D also at the local scale of the tunnel. Scenario calculations with the local hydrogeological model are used for comparing different tunnel designs (e.g., drainage system), which can contribute to decision-making stakeholders in different project phases.

Fig. 6: Result of regional-scale groundwater modeling. The colors show the hydraulic pressure distribution in pascal; the arrows represent the flow direction. The left image shows the model without the tunnel, and the right image shows the model with the tunnel at atmospheric pressure. (1) Pressure reduction due to atmospheric boundary conditions in the tunnel; groundwater flow direction changes and points toward the tunnel. (2) Also, distant areas (in the regional aquifer) react with considerable pressure losses. (3) In deeper areas, the pressure conditions and even the groundwater flow direction also change, since this area is an aquitard; however, the flow velocities (not shown in the figure) are extremely low. 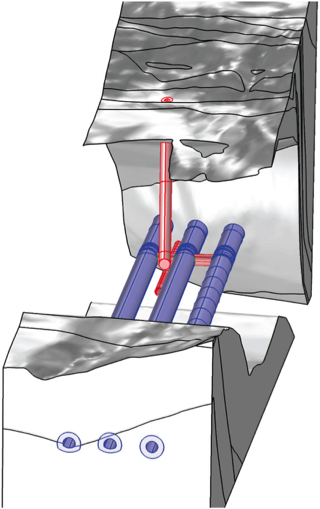 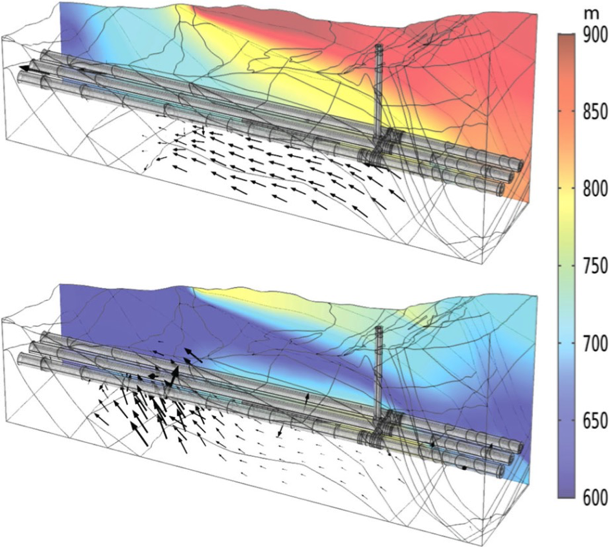 Fig. 7: Left: The detailed local model with the excavation-disturbed zone around the tunnel (blue shows the tunnel tubes and red shows the ventilation shaft and connecting drifts). Right: A result of the local model for a defined scenario. Colors show the distribution of the hydraulic head and arrows show major groundwater flow (Darcy velocity in logarithmic scale).

Dipl. Hyd. Stefan Scheidler studied hydrology at the University of Freiburg in Breisgau, Germany, and since 2006, he has been a scientist in the research group Applied and Environmental Geology (AUG) at the University of Basel. One focus of his work is the 3D geological and hydrogeological modeling of underground systems. The instruments developed by the AUG are an important basis for discussions on sustainable subsurface planning, including the management of groundwater resources.