Isoelectric Focusing and the Migration of Chemical Species

In chemistry, separation using differences in migration patterns plays an important role in understanding the properties of different chemical species. To help identify small chemical differences between molecules, researchers use a type of electrophoresis known as isoelectric focusing. With the use of an applied electric potential, this technique helps to define and separate molecules based on their varying isoelectric points. Let’s take a closer look at this separation method.

Taking into account both the transport and dissociation properties of ions in acid-base reactions, this process offers a focused environment in which to analyze the chemical characteristics of different chemical species. As an electric field is applied, ions respond to the voltage by migrating toward electrodes possessing an opposite charge: anions migrate towards the positive potential and cations toward the negative potential.

An ion migrating in the electric field may gain or lose protons in acid-base equilibrium reactions during its migration through the immobilized pH gradient in the cell forming new ions with different charges. When an ion approaches a pH value matching its dissociation point, it stops migrating in the electric field as it forms a neutral molecule; it reaches its isoelectric point. Differences in charge in its constituent dissociated ions, transport properties, and dissociation constants (pKa) then allows for the separation of different neutral molecules.

As emphasized by the AES Electrophoresis Society, isoelectric focusing is a valuable resource for analyzing the properties of cells, organelles, and viruses. While similar to electrokinetic focusing, this research method can be particularly useful in the study of proteins, which are often difficult to separate due to their varying charges. Although it requires additional infrastructure with the introduction of buffer solutions, isoelectric separation is especially valued for its overall strength in concentrating and focusing molecules into a fixed state.

By combining COMSOL Multiphysics and the Chemical Reaction Engineering Module, you can easily visualize the effect the applied voltage has on the migration of the particles. 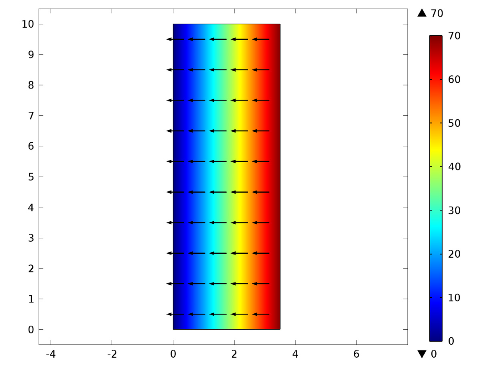 Electric voltage passing through the cell.

With the application of the Transport of Diluted Species interface, the Isoelectric Separation model from the Model Gallery shows how the proteins separate in the pH and electric fields as they travel within the cell. As highlighted by the plot, a mixture of six ionic proteins within a stream are divided as they migrate and separate toward their respective isolectric points. 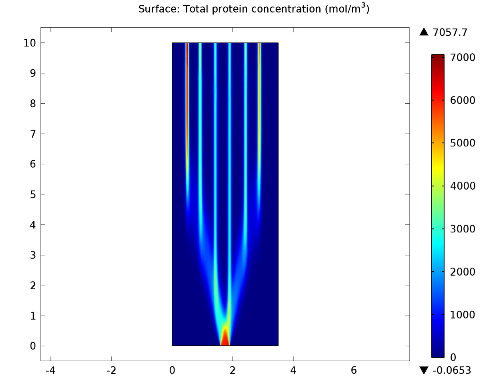 Proteins are divided into streams as they migrate in different directions.