Optimizing fuel for nuclear reactors can increase the amount of power they generate, improve their safety, and lower greenhouse gas emissions. However, studying nuclear fuel can be complex, as it involves interactions between multiple physical phenomena. In his keynote talk from the COMSOL Conference 2017 Boston, Andrew Prudil of Canadian Nuclear Laboratories (CNL) discussed using multiphysics models to gain insight into nuclear fuel. If you missed his presentation, find a video recording and summary below.

Canadian Nuclear Laboratories aims to improve nuclear fuel because it limits the efficiency of power generation in nuclear reactors. As Andrew Prudil said in his keynote talk: “If we can increase the power rating of the reactors, that’s worth millions of dollars per day.” Optimized nuclear fuel also enables more green energy on a power grid and reduces the risk of nuclear accidents. Plus, the improved fuel can be used in existing reactors to enhance their performance.

Before engineers can develop improved nuclear fuel, they have to understand its behavior. This is no simple matter, as nuclear fuel experiences multiple physical phenomena during nuclear reaction fission, including high temperatures, radiation, mechanical loading, thermal expansion, the creation of fission products such as xenon and krypton, and more.

To learn more about nuclear fuel behavior during a reaction, in which “everything depends on everything else,” CNL turned to the COMSOL Multiphysics® software.

First, Prudil discussed a multiphysics model — created for his PhD thesis — that studies the behavior of nuclear fuel (or pellets, in this case). The Fuel and Sheath Modeling Tool (FAST) simulates a long row of pellets separated by small gaps inside a metal sheath. Each part of the model involves multiple types of physics. For instance, sheaths in nuclear reactors typically use zirconium-based alloys, which consist of anisotropic crystal structures. For accurate results, the model must account for how the crystals behave when pulled in different directions. 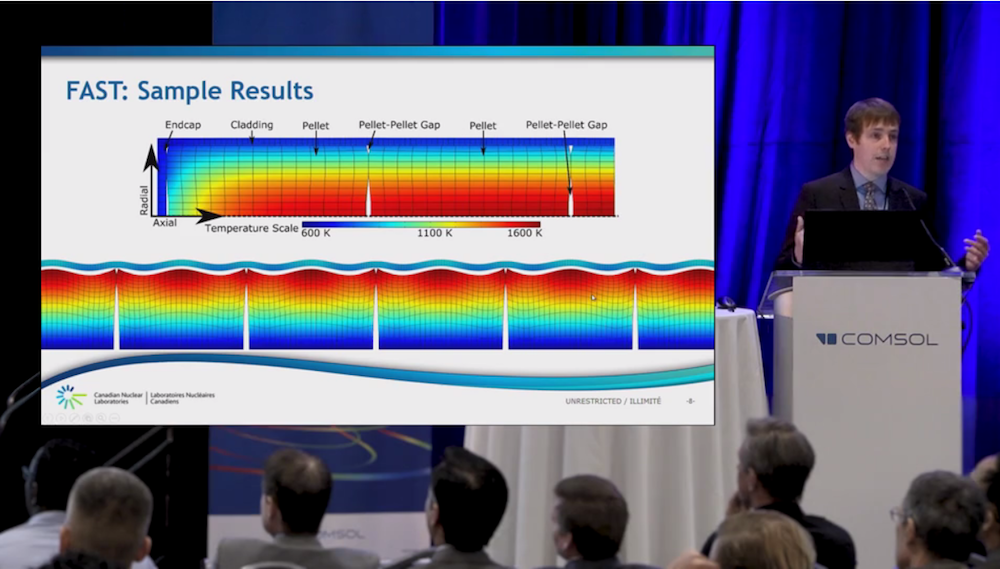 From the video: Results for the FAST simulations.

The simulations show how the ends of the pellets push outward to make room for the hot material at the center. The “hourglassing” phenomenon causes the ends of the pellets to create a wavy pattern in the cladding (exaggerated in the image above). FAST can also plot the radial displacement and various stress and strain fields, such as the hydrostatic pressure, von Mises stress, and axial creep. Prudil noted that the results show “very interesting, very rich spatial fields.”

With FAST, it’s possible to look at how nuclear fuel behaves in a continuum — both in terms of a temperature gradient and mechanical loading.

Prudil then discussed a model created at Canadian Nuclear Laboratories that simulates how fission gas forms bubbles on the boundary of a single grain of uranium oxide, a process that involves fission gas products such as xenon and krypton. At the grain boundary, these insoluble gases try to diffuse pressure by forming bubbles. The bubbles grow larger and larger and let gases escape.

The CNL model simulates this process for individual bubbles. Instead of using the traditional phase field method, which can be computationally expensive, they created the included phase technique to model the phase interface.

Simulation results for the included phase technique. Animation courtesy Andrew Prudil and can be found in the paper: “A novel model of third phase inclusions on two phase boundaries“.

Initially, the simulations show a random distribution of bubbles on the grain boundary. As time progresses, the bubbles combine to minimize the surface energy before collecting at the edges and vertices. CNL validated their approach, determining that they could control the contact angle of a single bubble on an infinite plane.

Wrapping up, Prudil mentioned that COMSOL Multiphysics could also be used to investigate other interesting multiphysics phenomena (e.g., columnar grain growth). With these capabilities, engineers can learn more about nuclear fuel and continue to advance the field.

To learn more about how CNL uses multiphysics modeling to understand the behavior of nuclear fuel, watch the keynote video at the top of this post.