There’s only a certain amount of fresh water accessible and available on Earth, and as the human population grows, the demand for it increases. About 70% of Earth’s surface is ocean water, which has too much salt for people to drink. However, as technology advances, desalination — the process of removing salt from water — becomes increasingly viable. Before seawater can be treated at a desalination facility, the water must get there first. That’s where seawater pipeline systems come in.

Seawater systems can be made of high-alloy stainless steel. Because of the salt and other dissolved or suspended particles within seawater, these systems can become highly corroded. Corrosion leeches metals from the system or eats away at it, which causes damage. This damage can be expensive, make the system less efficient, and even lead to its physical collapse. 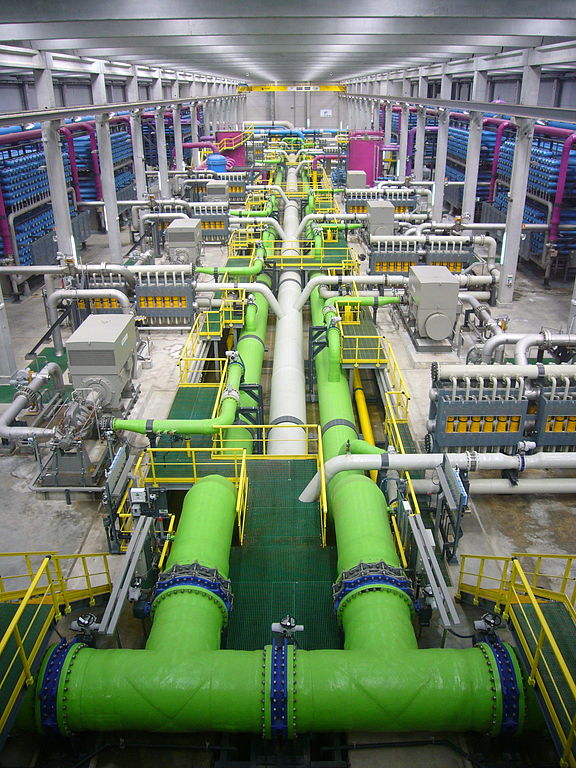 A desalination plant. Image by James Grellier — Own work. Licensed under CC BY-SA 3.0, via Wikimedia Commons.

Instead, an alternative internal corrosion protection technique based on resistor-controlled cathodic protection can be used. The tutorial model discussed here simulates this method using the COMSOL Multiphysics® software and add-on Corrosion Module to find the impact of coupling resistance on the level of corrosion protection offered. Corrosion engineers can also use this type of model to explore the effect of pipeline radius on the need for corrosion protection.

The model of a complex pipeline system is shown below. There are two pipeline cycles: one with a radius of 0.5 meters and another with a radius of 0.2 meters. The resistor-controlled sacrificial anodes are distributed throughout the system and are highlighted in blue. The figure also has a staircase and floor, but these are only for visualization purposes. 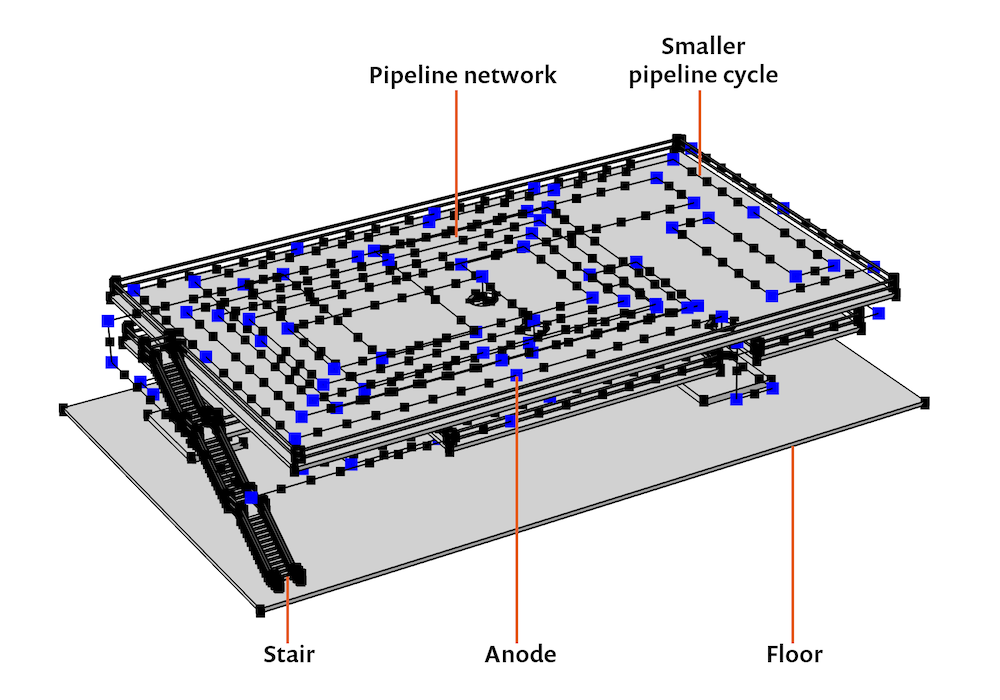 Model geometry for the pipeline system.

See the model documentation for details of how the interfaces are used and a step-by-step modeling guide.

Taking a Look at the Simulation Results 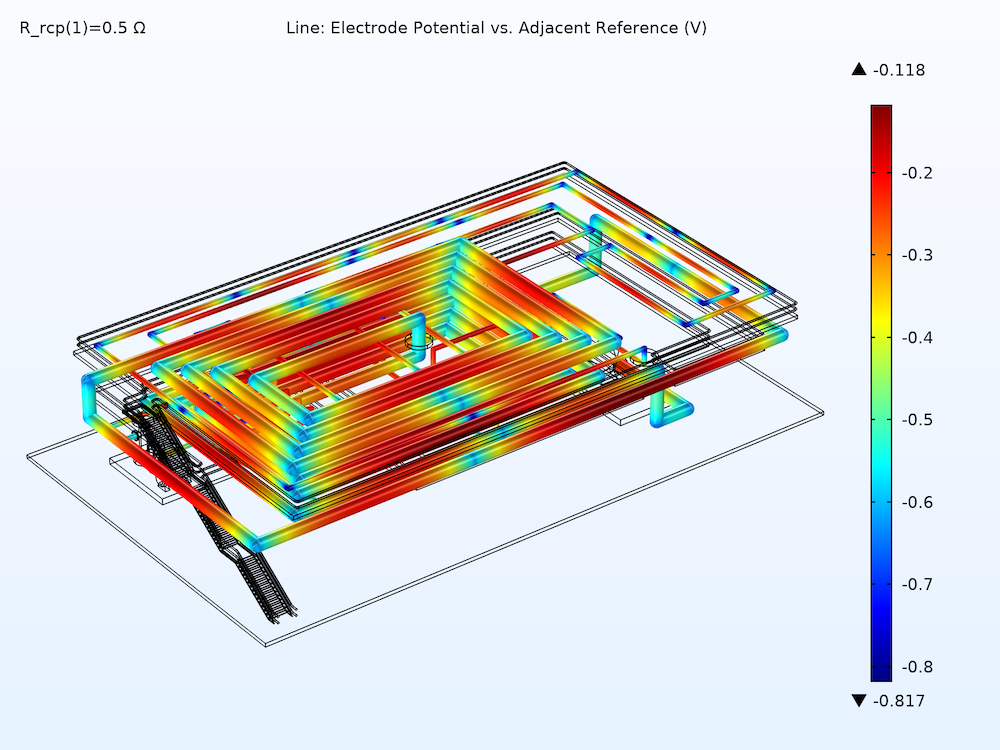 Electrode potential vs. adjacent reference in the pipeline system.

You can also identify the regions along the pipeline network that may not be adequately protected for corrosion by applying a filter with an expression Electrode potential versus adjacent reference > Pipeline protection potential. This is demonstrated in the graph below. The pipeline parts with inadequate protection are shown in red. 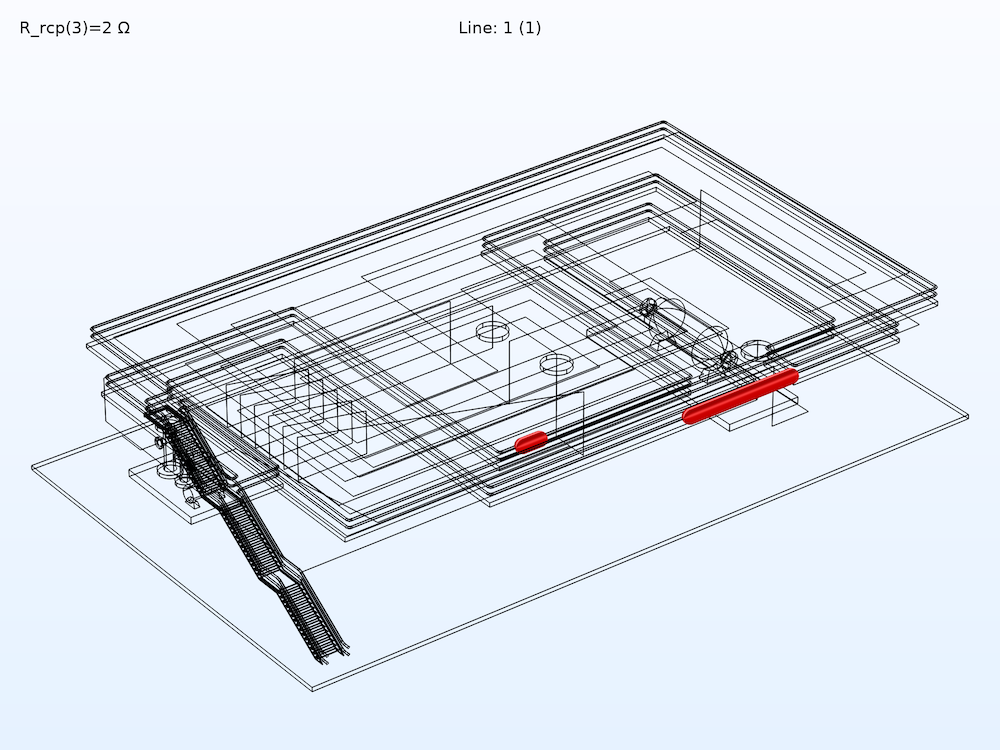 Resistor-controlled cathodic protection for a pipeline system, with inadequate protection highlighted in red.

Want to try modeling resistor-controlled cathodic protection systems yourself, or see results for different ohm values? Click the button below to get the tutorial model. Note that you will need to be logged into your COMSOL Access account and have a valid software license.

How to Model Ion-Exchange Membranes and Donnan Potentials

I want the tutorial course