Almost all media absorb electromagnetic radiation to some extent. In high-powered laser focusing systems, a medium such as a glass lens may absorb enough energy from the laser to heat up significantly, resulting in thermal deformation and changing the material’s refractive index. These perturbations, in turn, can change the way the laser propagates. With the Ray Optics Module, it is possible to create a fully self-consistent model of laser propagation that includes thermal and structural effects.

To understand how ray trajectories are affected by self-induced temperature changes, consider a collimated beam that strikes a pane of glass at normal incidence. Assume that an anti-reflective coating has been applied to the glass surface so that the rays are not reflected. A typical pane of glass absorbs a very small, but nonzero, fraction of the power transmitted by the beam. If the power is sufficiently low, the temperature change within the glass will be negligible, and the outgoing rays will be parallel to the incoming rays.

However, if a large amount of power is transmitted by the beam, the power absorbed by the pane of glass may substantially alter the temperature of the glass. The glass expands slightly, changing the angle of incidence of the rays and causing the transmitted rays to be deflected from their initially parallel trajectories. In addition, many materials have temperature-dependent refractive indices, and the temperature-induced change in the refractive index can also perturb the ray trajectories. Because the structural deformation and the change in refractive index tend to focus the outgoing rays, this phenomenon is known as thermal lensing.

Next, we take a more in-depth look at an application in which thermal and structural effects can significantly perturb ray trajectories.

Consider a basic laser focusing system that consists of two plano-convex lenses. The first lens collimates the output of an optical fiber while the second lens focuses the collimated beam toward a small target.

If the laser beam delivers a small amount of power, then it is straightforward to model the propagation of the beam toward the target by using the Geometrical Optics interface and ignoring the temperature change in the lenses. The following image shows the trajectories of the rays in the lens system. 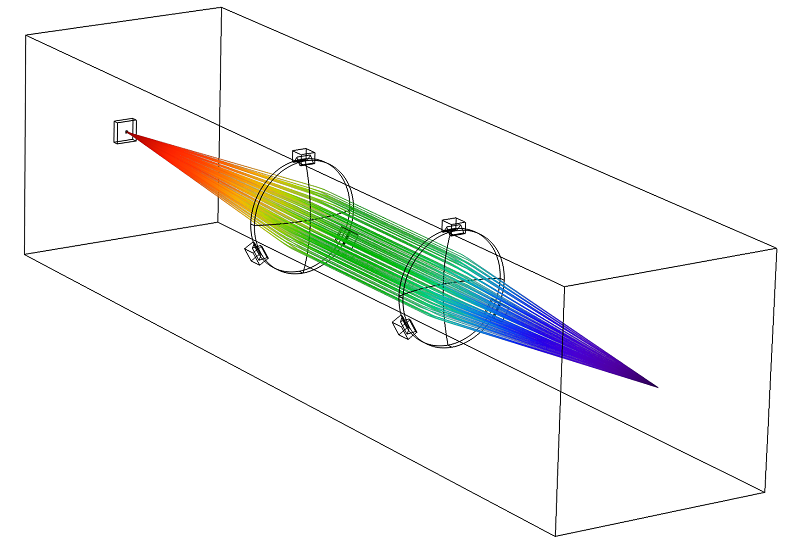 However, even a high-quality glass lens absorbs a small fraction of the electromagnetic radiation that passes through it. If the optical fiber delivers a very large amount of power, then a thermally induced focal shift may occur; in other words, the changes in refractive index and lens shape can move the focus of the beam by a significant amount. If it is necessary to focus the laser accurately, then the possibility of thermally induced focal shift must be taken into account when designing the lens system.

In this example, we will observe how the temperature change in the lenses causes the beam to be focused at a location several millimeters away from the target.

To model ray propagation in the thermally deformed lens system, we use the following physics interfaces:

The physics interfaces and nodes used in this model are shown in the following screenshot.

In addition to the Ray Optics Module, either the Structural Mechanics Module or the MEMS Module is needed to model the thermal expansion of the lenses.

Under the hood, the Ray Optics Module computes the ray trajectories by solving a set of coupled first-order ordinary differential equations,

where c is the speed of light in a vacuum. In an absorbing medium, the refractive index can be expressed as n-i\kappa, in which n and \kappa are real-valued quantities.

As the rays enter and leave the lenses, they undergo refraction according to Snell’s Law,

The intensity and power of the refracted rays are computed using the Fresnel Equations. In most industrial laser focusing systems, an anti-reflective coating is applied to the surfaces of the lenses to prevent large amounts of radiation from being reflected.

In this example, the anti-reflective coating is modeled by applying a Thin Dielectric Film node to the surfaces of the lenses.

Computing the Power Transmitted by Each Ray

The variables that are used to compute ray intensity are controlled by the “Intensity computation” combobox in the settings window for the Geometrical Optics interface. To compute a heat source using the energy lost by the rays, select “Using principal curvatures and ray power”. 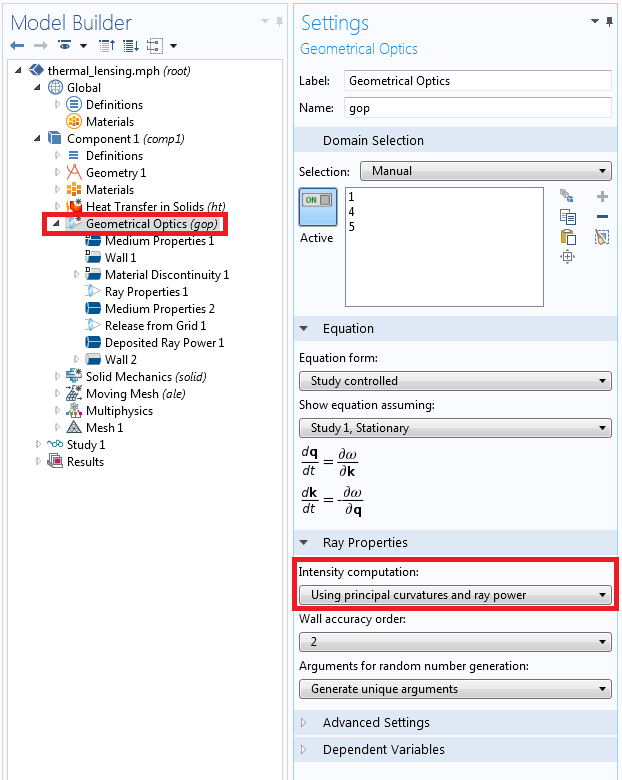 The total power transmitted by each ray, Q, remains constant in non-absorbing domains. In a homogeneous, absorbing domain, the power decays exponentially,

where k_0 is the free-space wave number of the ray.

In order to apply the power lost by the rays as a source term in the Heat Transfer in Solids interface, it is necessary to add a Deposited Ray Power node to the absorbing domains. This node defines a variable Q_{\textrm{src}} (SI unit: W/m^3) for the volumetric heat source due to ray attenuation in the selected domains. As the rays propagate through the lenses, they contribute to the value of Q_{\textrm{src}},

where Q_{j} (SI unit: W) is the power transmitted by the ray with index j, N_t is the total number of rays, and \delta is the Dirac delta function. In practice, each ray cannot generate a heat source term at its precise location because the rays occupy infinitesimally small points in space, whereas the underlying mesh elements have finite size, so the power lost by each ray is uniformly distributed over the mesh element the ray is currently in.

The following short animation illustrates how the heat source defined on domain mesh elements (top) is increased as the power transmitted by each ray (bottom) is reduced.

The temperature in the lens, T, can be computed by solving the heat equation,

where k is the thermal conductivity of the medium. A Heat Flux node is used to apply convective cooling at all boundaries that are exposed to the surrounding air,

As the temperature changes, it contributes a thermal strain term \epsilon_{\textrm{th}} to the total inelastic strain in the lenses. The thermal strain is defined as

where \alpha is the thermal expansion coefficient, T is the temperature of the medium, and T_{\textrm{ref}} is the reference temperature. The resulting displacement field \mathbf{u} is then computed by the Solid Mechanics interface.

If the power transmitted by the beam is very low, then the energy lost by the rays to their surroundings does not noticeably change the temperature of the medium. However, it is still possible for other phenomena, such as external forces and heat sources, to change the shape or temperature of the lenses.

If the power transmitted by the beam is sufficiently large, then the dissipation of energy in an absorbing medium may generate enough heat to noticeably change the shape of the domain or the refractive index in the medium. In this case, the ray trajectories affect variables, such as temperature, that are defined on the surrounding domain, and these variables in turn affect the ray trajectories. This is considered a bidirectional, or two-way, coupling.

In this example, we assume that the laser is operating at constant power, so it is preferable to compute the temperature and displacement field using a Stationary study step. However, the ray trajectories are computed in the time domain. 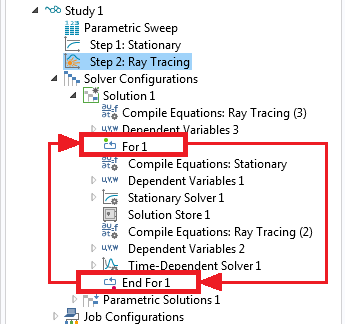 The nodes between the For and End For nodes are repeated a number of times that is specified in the settings window for the For node. Furthermore, every time a solver is run, it uses the solution from the previous solver. In this way, it is possible to set up a bidirectional coupling between the two studies and iterate between them until a self-consistent solution is reached.

Results of Our Thermal Lensing Model

We now examine the ray trajectories close to the target for two cases: A 1-watt beam and a 3,000-watt beam. 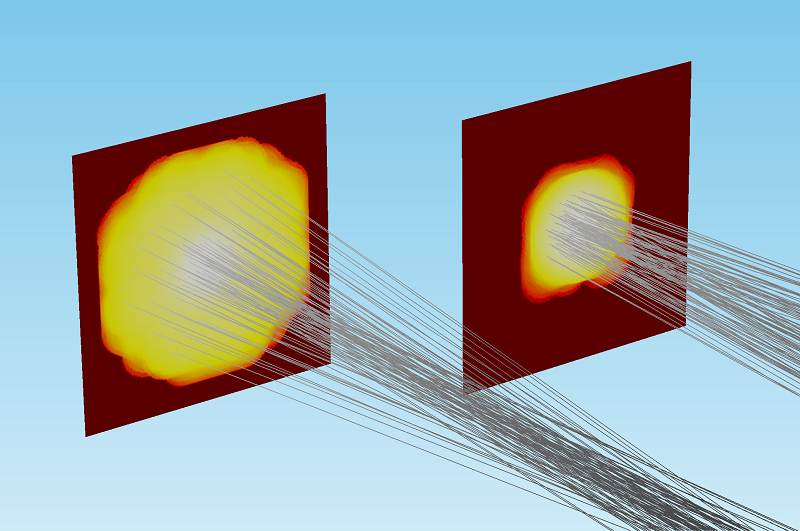 Comparison of the deposited ray power for a 3,000-watt beam (left) and 1-watt beam (right). For comparison and visualization purposes, the color expression for deposited power has been normalized and plotted on a logarithmic scale.

The Geometrical Optics interface also includes built-in operators for evaluating the sum, average, maximum, or minimum of an expression over all rays. Using these operators, it is possible to quantify the beam width in a variety of ways. As shown in the plot below, the 3,000-watt beam is focused more than 2 millimeters away from the target surface. 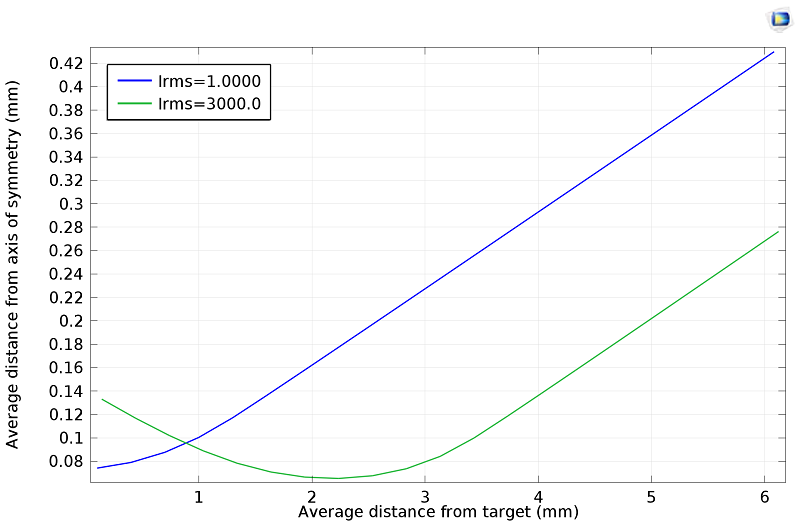 We have seen that the temperature change and the resulting thermal expansion in a high-powered laser system can significantly shift the focal point of the beam. With the Ray Optics Module, it is possible to take thermally induced focal shift into account when designing such systems. 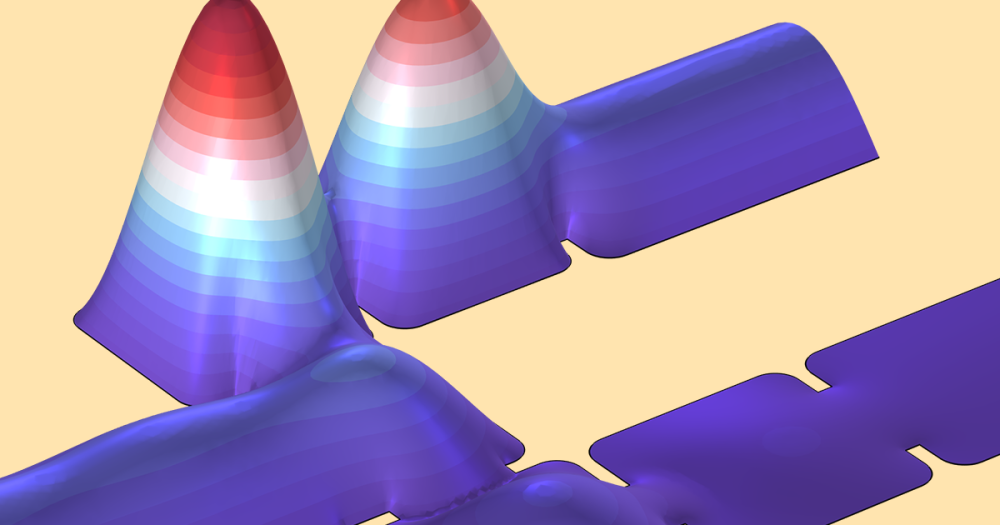