New Book from One of the Greats in Chemical Engineering Education 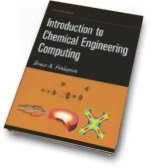 Bruce spoke about using COMSOL Multiphysics as part of his undergraduate course on research projects. Bruce captivated his audience by using props; a few lego pieces joined together to show the structure of a microfluidic channel (I can still remember it 10 years later). The students working on this project were modeling the effects of diffusion coefficients on a static microfluidic mixer. This was one of over 100 research reports that have been written by his students until Bruce’s retirement in 2008. All of them continue to investigate a different chemical engineering phenomenon using modeling and are a great resource for many chemical engineers today; even those working in industry.

Bruce wrote about these projects in a guest editorial for COMSOL News, titled Always Check Your Results!. He has also taken his strong belief in chemical engineering education to the publishing world, producing a book in 2006, of which a new edition has just been published. It is our privilege to announce the release of an Introduction to Chemical Engineering Computing, 2nd Edition and we hope that the chemical engineering community will gain a lot from it.

Read more about the book here http://www.comsol.com/support/books/icec2e/, and check out Bruce’s blog here.

Thanks for sharing of such a great information aboutthe book! Can I read it learning in the Uni? Or will it be too complicated for me? When reading https://ejemplius.com/muestras-de-ensayos/filosofia/ , I have found a lot of useful information for my uni courses. So I hope, it will like such a great descritption. And to enjoy.