What Is an Impedance Boundary Condition?

Impedance models are really models of a “full flow”, that is, a condition imposed simultaneously on the acoustic pressure and acoustic velocity, defining a given relation between the two elements. Such relations are known in some idealized cases. Introducing an impedance condition essentially forces a certain idealized acoustic behavior. An impedance boundary condition is therefore a powerful yet simple condition that is applied to situations in which the idealized dynamics are obvious. Microphone cavities with well-known membrane dynamics, acoustics in long pipes, and plane-wave acoustics at porous surfaces are some relevant examples.

Finally, we have the characteristic specific impedances Z_\textrm{c} defined for traveling waves. These types of impedances relate the particle velocity and pressure at every point as the wave moves through the domain, making them useful low-order models for an infinite domain. One example is the well-known relation for plane traveling waves, Z_\textrm{c}=\rho c.

As the screenshots below indicate, toggling between the array of impedance models is quite easy. For the more complex options, we have included an illustration to offer a better description. 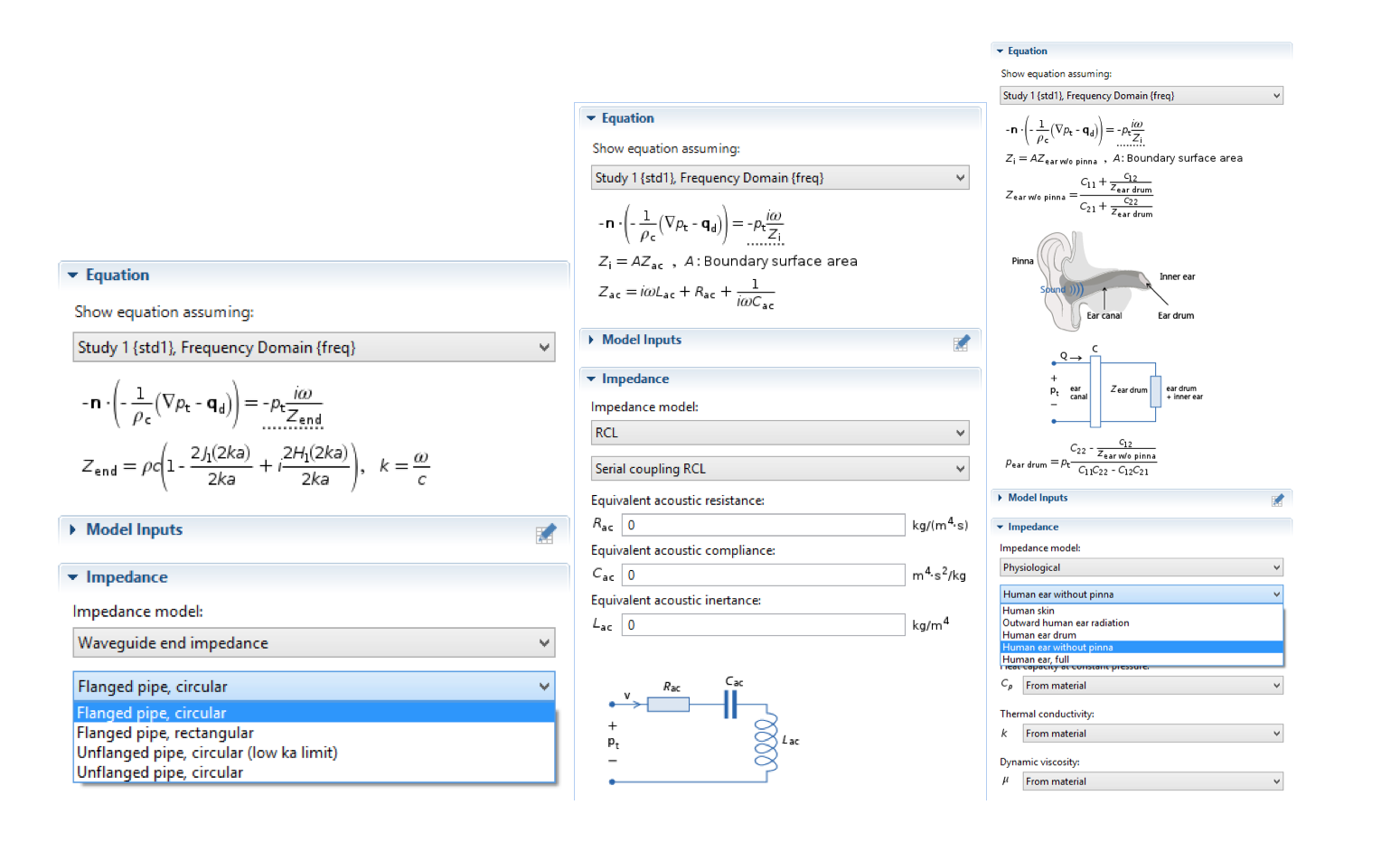 In the rest of the blog post, we will walk through a few examples that demonstrate how to exploit the RCL functionality option in the impedance boundary conditions. The first model focuses on the use of an RCL circuit to represent a measurement microphone. The last two examples are based on the same system, with a complex COMSOL Multiphysics model treated as an “experiment” in which certain parts (a submodel) can be parameterized by an impedance. In the first case, the impedance is given as an interpolation function. In the second case, an RCL model is fitted to the data using optimization.

An RCL Condition in Electroacoustics

We can begin by considering a case in which parameters for an impedance boundary condition are known. Such a situation is common in electroacoustics, as lumped-parameter values are often specified for devices.

In many engineering branches, acoustics included, lumped-parameter modeling is a recognized strategy for establishing useful models without spatial resolution. In the new Impedance boundary condition, a general framework for simple lumped-parameter models is available under the RCL option. Let’s use the example of a simple microphone, as demonstrated in our lumped receiver tutorial. Here, the behavior of a receiver (miniature loudspeaker) is analyzed, with a microphone placed at the opposite end to read out the signal.

Model geometry of a receiver (miniature loudspeaker) placed in a test setup.

To model the microphone, we use a serial RCL impedance condition

C is the compliance of the microphone (a measure of the air volume behind the diaphragm as it is pushed back), R is the losses of the system (thermoviscous damping), and L is the acoustic mass of the diaphragm. The condition is applied evenly across the entire end of the outlet, implicitly neglecting variations in diaphragm displacement at different radial coordinates that would occur if a full microphone model was included.

Compared with experimental measurements, the model offers excellent predictions across a broad frequency band using the simple boundary condition in Eq. (3) for the microphone. The impedance provides a boundary condition with sufficiently realistic dynamics, keeping the focus on the detailed modeling of the receiver and other elements. 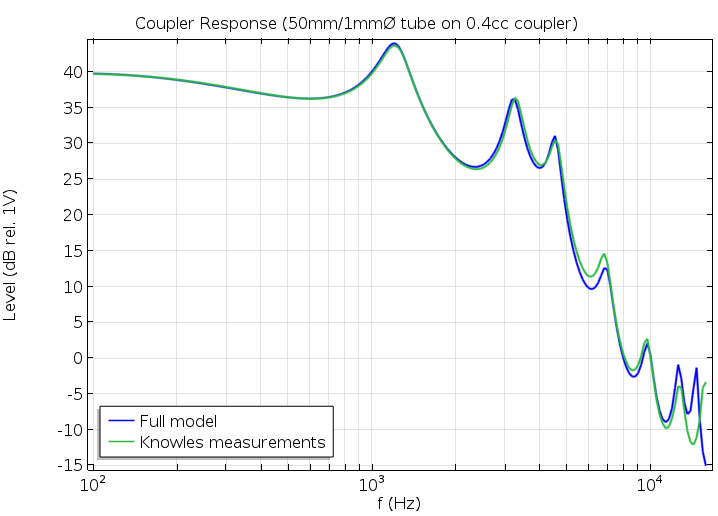 A plot comparing pressure inside the coupler region.

How to Model a Subcomponent Using an Impedance

Shifting gears, we’ll now look at how to extract an impedance model in order to represent a complex subcomponent. You can download the model presented here from our Application Gallery. 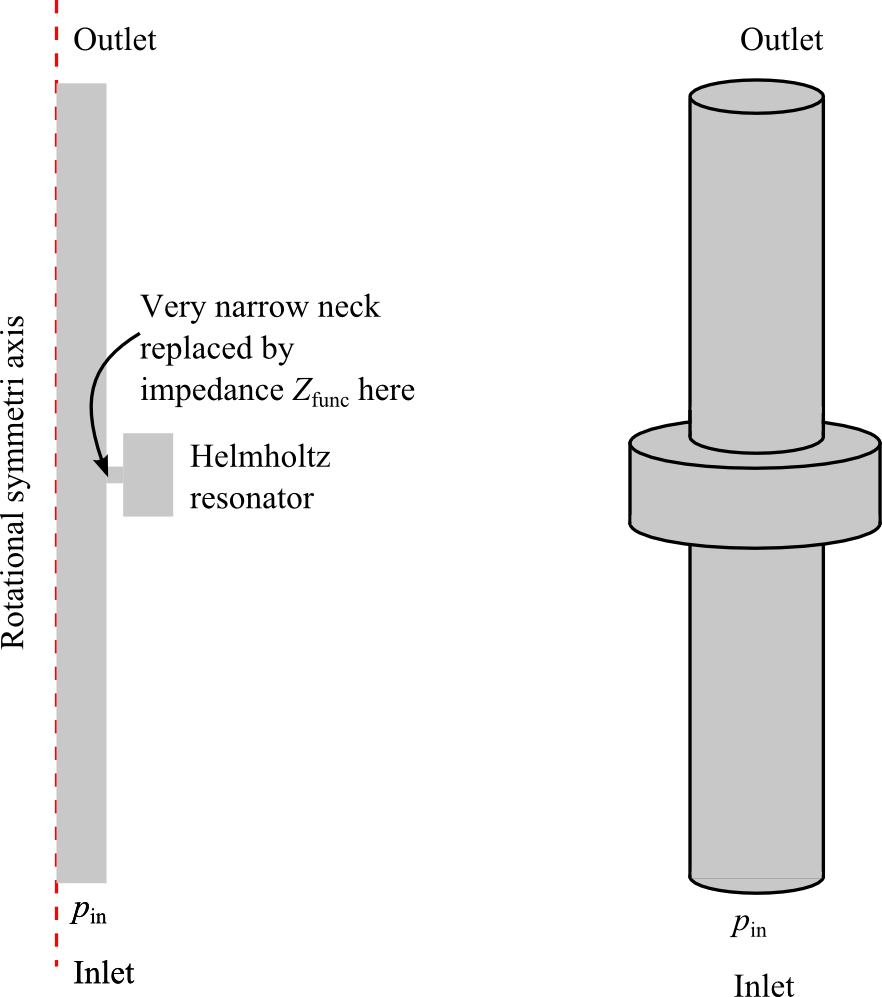 Muffler-like system with a Helmholtz resonator. The schematic on the left corresponds to the 2D axisymmetric geometry implemented in COMSOL Multiphysics. Notice the very narrow neck into the resonator, which is responsible for viscothermal losses.

User-Defined Impedance Given by an Interpolation Function

When moving from component simulation to system simulation, it can be advantageous to lump certain parts or full components (i.e., solving the thermoacoustic model in the current resonator is computationally expensive). To do so, we can replace the Thermoacoustics submodel (the Helmholtz resonator) with an impedance boundary condition, applying the condition to the area where the inlet to the neck is located. In this way, it is possible to simulate the whole model with only the Pressure Acoustics interface.

The figure below illustrates the real and imaginary parts of Z_{\textrm{func}}. The data is used to create two interpolation functions for Z_{\textrm{func}}: one for the real part (Zfunc_real) and one for the imaginary part (Zfunc_imag). The functions contain all of the information about the impedance and can be called from inside the User Defined impedance boundary condition by writing: Zfunc_real(freq)+i*Zfunc_imag(freq). Using the impedance, we set up a simplified version of the model with only the Pressure Acoustics interface. The Helmholtz resonator is no longer included in the setup, but it is represented by the impedance. 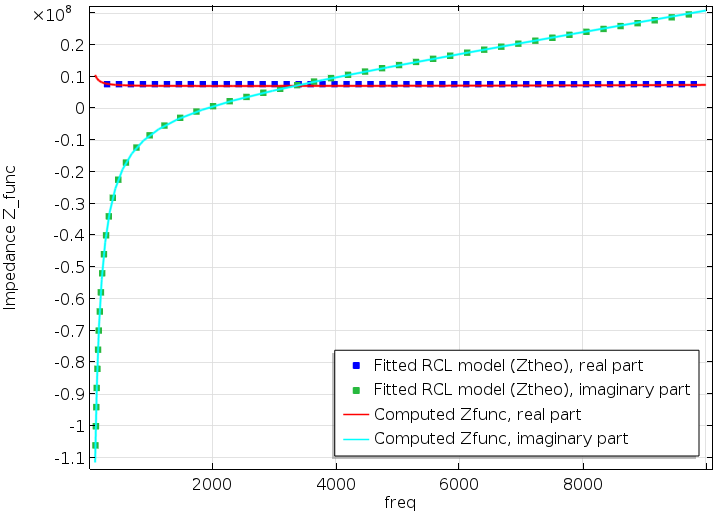 Resonator impedance Z_{\textrm{func}} as obtained via Eq. (4) from the fully coupled model. The points indicate the best fits of Eq. (6) to the data given by the solid lines.

To evaluate the performance of the simplified model, we compute the transmission coefficient \tau across the main tube. The transmission coefficient is defined as the ratio of the transmitted power (W_{\textrm{out}}) relative to the incident inlet power (W_{\textrm{in}}). We also plot the “energy balance”, that is, the dissipated energy in the system. This is given as the difference between the incident and reflected and transmitted power,

where W_{\textrm{ref}} is the reflected power.

The results are depicted in the following two figures. Good agreement is shown in both of the graphs, with little difference between the full model and the simplified model using the interpolated impedance. Shorter solution times are an added benefit, as the simplified version takes only 3 seconds to solve (the fully coupled model took 25 seconds). While the numbers are hardware-dependent, they do reflect the computational efficiency of removing the need to solve the thermoacoustic model in the resonator. 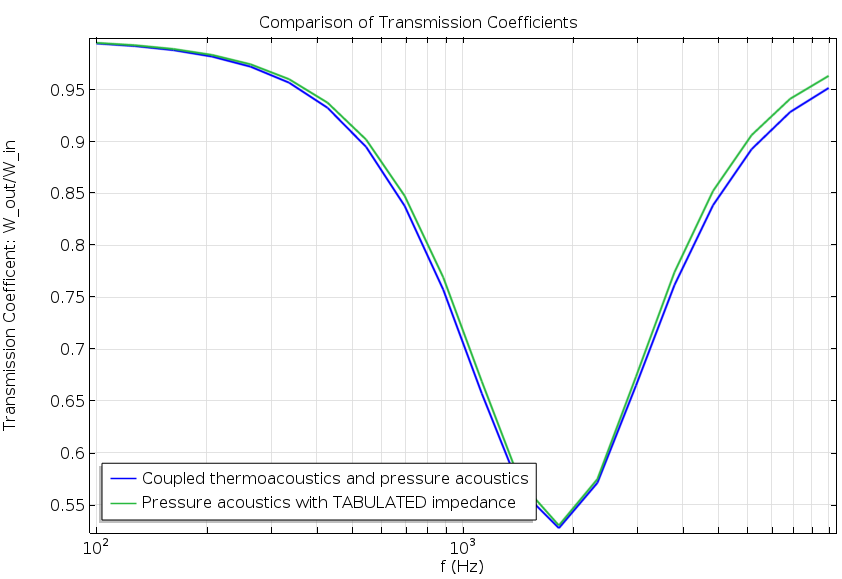 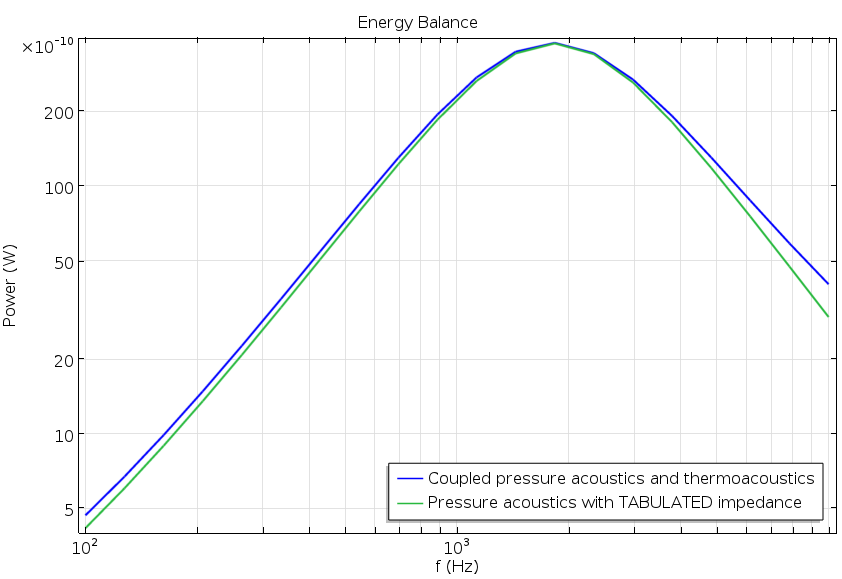 In most realistic situations, however, it is not particularly advantageous to first solve a complicated version of a model and then reduce it. Single subcomponents can be modeled individually and characterized. The detailed impedance models of the complex subcomponents derived from full models should be kept in a library and called upon when necessary. COMSOL Multiphysics has functionality to support such a practice: Tabulated values of the results from complex subcomponents can be saved to files and brought in as needed.

In cases where a priori knowledge is used to deduce the mathematical form of the impedance, or when the data obviously lends itself to simple mathematical forms, the preferred route may be to fit a simple theoretical model to the full detailed COMSOL model. In the former case, the parameter values of the impedance model reflect characteristics of the underlying physics and offer insight into the system. For instance, if the data is described well by an RCL-type model, such as Eq. (3), the resonance frequencies are immediately available.

We will illustrate the steps for fitting a theoretical model to an impedance boundary condition. The Helmholtz resonator has a moving acoustic mass (the air in the neck), a compliance (the compressible air in the resonator volume), and losses (the thermoviscous losses). Thus, a good model across the entire frequency range is

The values are entered directly into the Impedance boundary condition via the RCL option. (For general theoretical models, the User defined option can be used as it accepts any model, no matter the level of complexity.) Using only the Pressure Acoustics interface and the RCL impedance model, we once again compare the results from the new simplified version to the fully coupled model. We plot the transmission coefficient \tau and the power balance from Eq. (5). 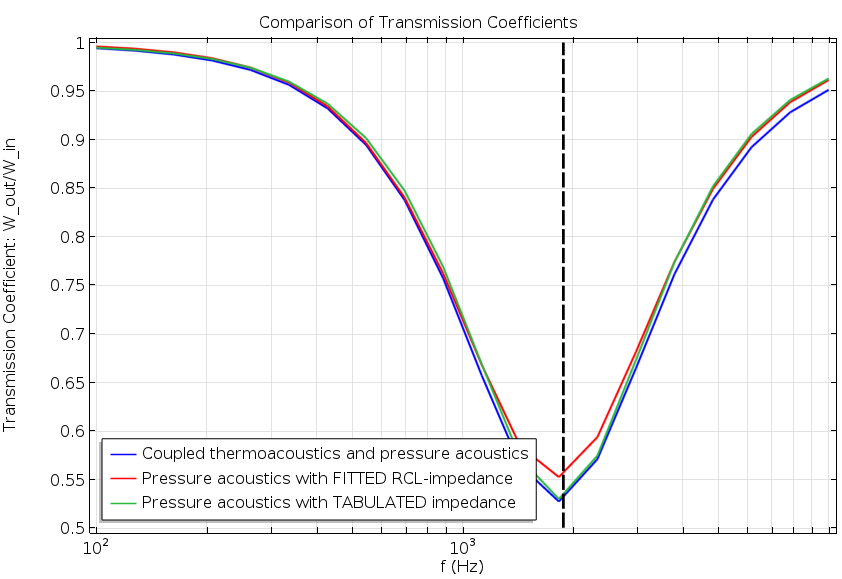 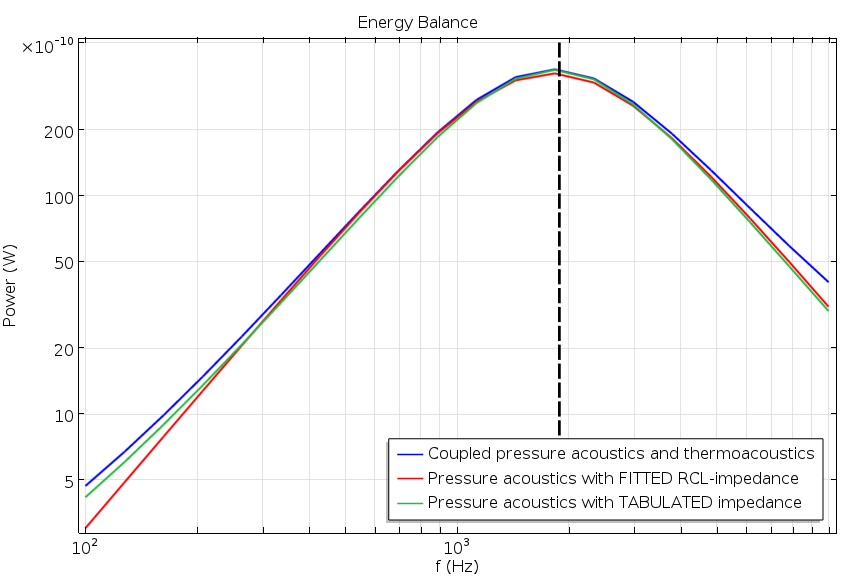 We again observe good agreement for both metrics across the entire frequency range. The high-frequency response provides a slightly better representation of the fully coupled model than in the initial example, while the situation is opposite for low frequencies.

As mentioned earlier, simple, well-known boundary impedance models can be used to obtain even more insight about the system. Let’s apply such an approach to our present simple muffler case.

The resonance frequency for series-coupled RCL models, such as Eq. (6), is given by f_{\textrm{res}}=\frac{1}{2 \pi \sqrt{C_{\textrm{func}} L_{\textrm{func}}}}. It is, therefore, expected that the optimal muffler working conditions (lowest transmission coefficient) will be achieved at the frequency

Indeed, this is found to be the case. Dashed vertical lines indicate the resonant frequency in the figures above, predicting the minimum transmission coefficient very well.