Today, we released a new version of the COMSOL Multiphysics® software, version 6.0! With the release, we bring you the Model Manager, a new core functionality that enables efficient simulation data management and collaboration. Also introduced with the new version is the Uncertainty Quantification Module, a new add-on product for global sensitivity and probabilistic analyses. Additionally, many significant updates have been made to the platform product and add-on products. Get an overview of what’s new in the latest version here.

When working with a simulation model, you will often need to keep a backup of old file versions. Why? You may want to use an older version as a template for a new model. Or you may need to reference an older version if your modeling work goes off track. The more models you create, the more files you will have. As a result, you may find yourself spending more time on managing model files and data than on actual modeling and simulation work! The new Model Manager is a simulation data management workspace that helps alleviate this issue. 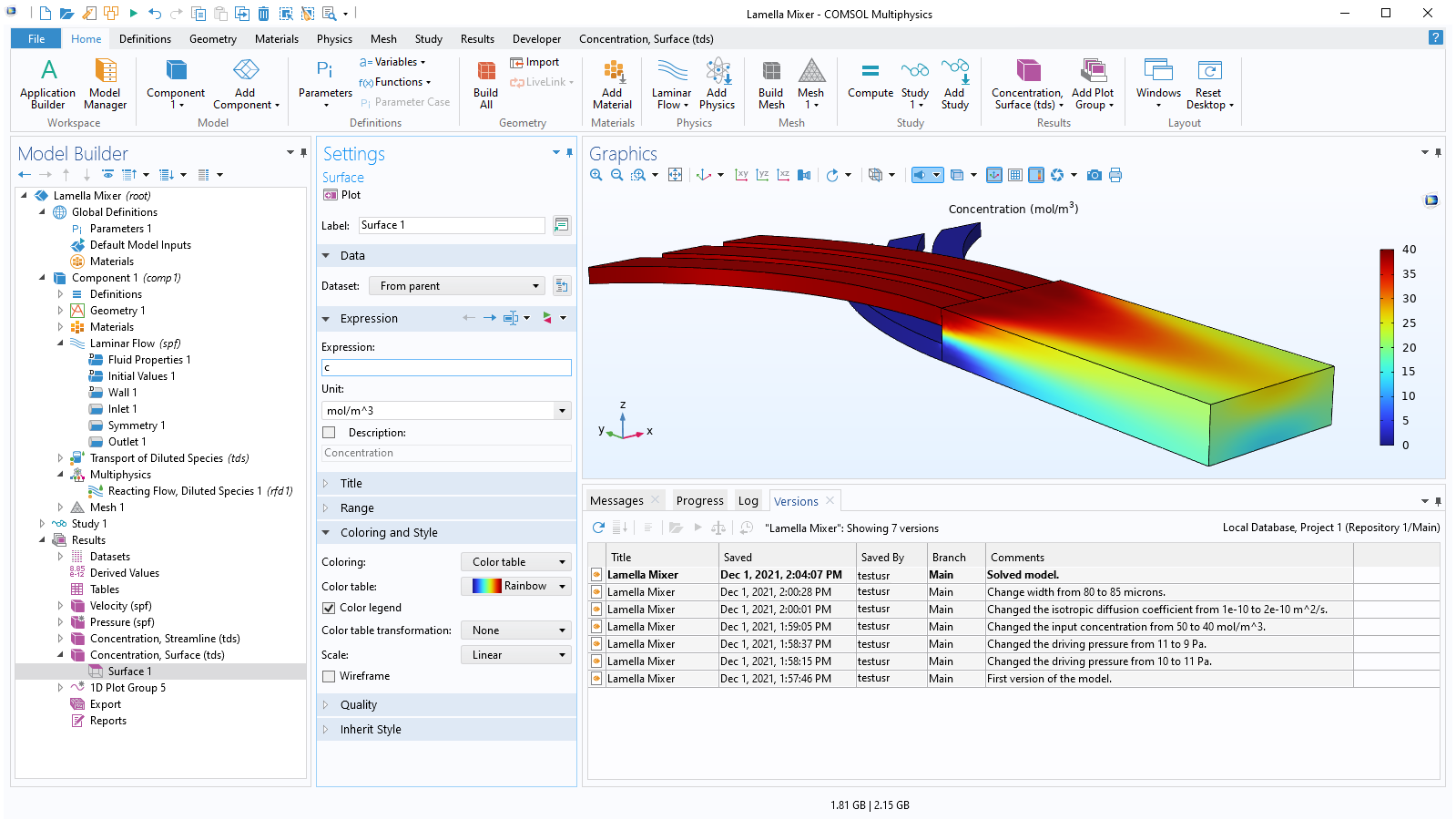 Using the Model Manager, you can save model files with comments, which is especially helpful when trying to locate an older version.

The functionality, which is fully integrated in the COMSOL Desktop® user interface, provides a structured workspace where individuals and teams can centrally organize their simulation data and auxiliary data (such as CAD files and experimental data). It is designed to foster collaboration among colleagues and engineering teams as well as help streamline the modeling and simulation workflow.

Key features and functionality present in the Model Manager:

Get an in-depth overview of the Model Manager here.

Produce more complete, accurate, and useful multiphysics models with the new Uncertainty Quantification Module. As its name suggests, this add-on product is useful for analyzing the impact of model uncertainty. You can use the module to perform the following study types: screening, sensitivity analysis, uncertainty propagation, and reliability analysis.

The module can be used to:

One of the main strengths of the Uncertainty Quantification Module is that it can be used for analyzing uncertainties in any simulation covered by COMSOL Multiphysics, including electromagnetic, structural, acoustics, fluid flow, heat, and chemical engineering simulations. It can also be combined with the CAD Import Module, Design Module, and any of the LiveLink™ products for CAD. 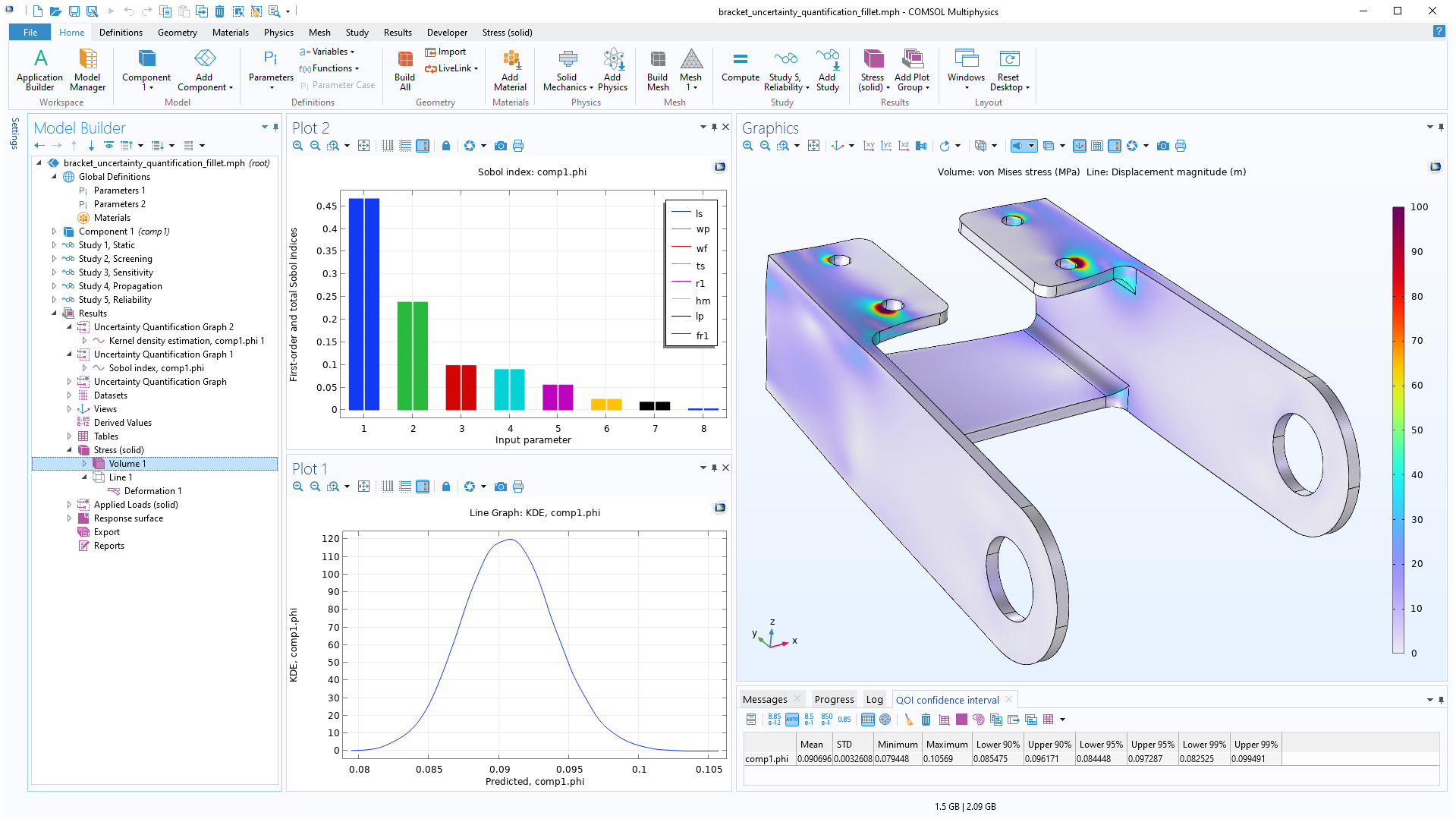 An uncertainty propagation study of a bracket performed using the Uncertainty Quantification Module.

With the release of version 6.0, you will also see a number of functionality improvements across the existing add-on products. Here, we will focus on a few major updates.

With the Heat Transfer Module, you will benefit from thermal surface-to-surface radiation performance improvements by a factor of 10 or more for both memory reduction and computation time. These performance improvements come with no sacrifice in accuracy and make it possible to analyze significantly larger structures — which is important for modeling situations with large temperature differences, high surface emissivity, or small amounts of heat transfer by conduction and convection.

You can see the performance improvements in action in the new Heat Transfer in a Room with a Stove tutorial model.

For many years, you have been able to import and analyze many aspects of printed circuit boards (PCBs) with COMSOL Multiphysics. Version 6.0 introduces several new features for electromagnetics analysis of PCBs. For example, for resistance and inductance matrix calculations of PCBs, the AC/DC Module has added support for frequency-domain computations. In addition, the RF Module includes new functionality for adaptive meshing and physics-controlled meshing for microwave and millimeter-wave circuits on PCBs.

You can now perform flow-induced noise modeling, such as the noise generated by fans and ducts, by combining large eddy simulation (LES) from the CFD Module and the functionality of the Acoustics Module. 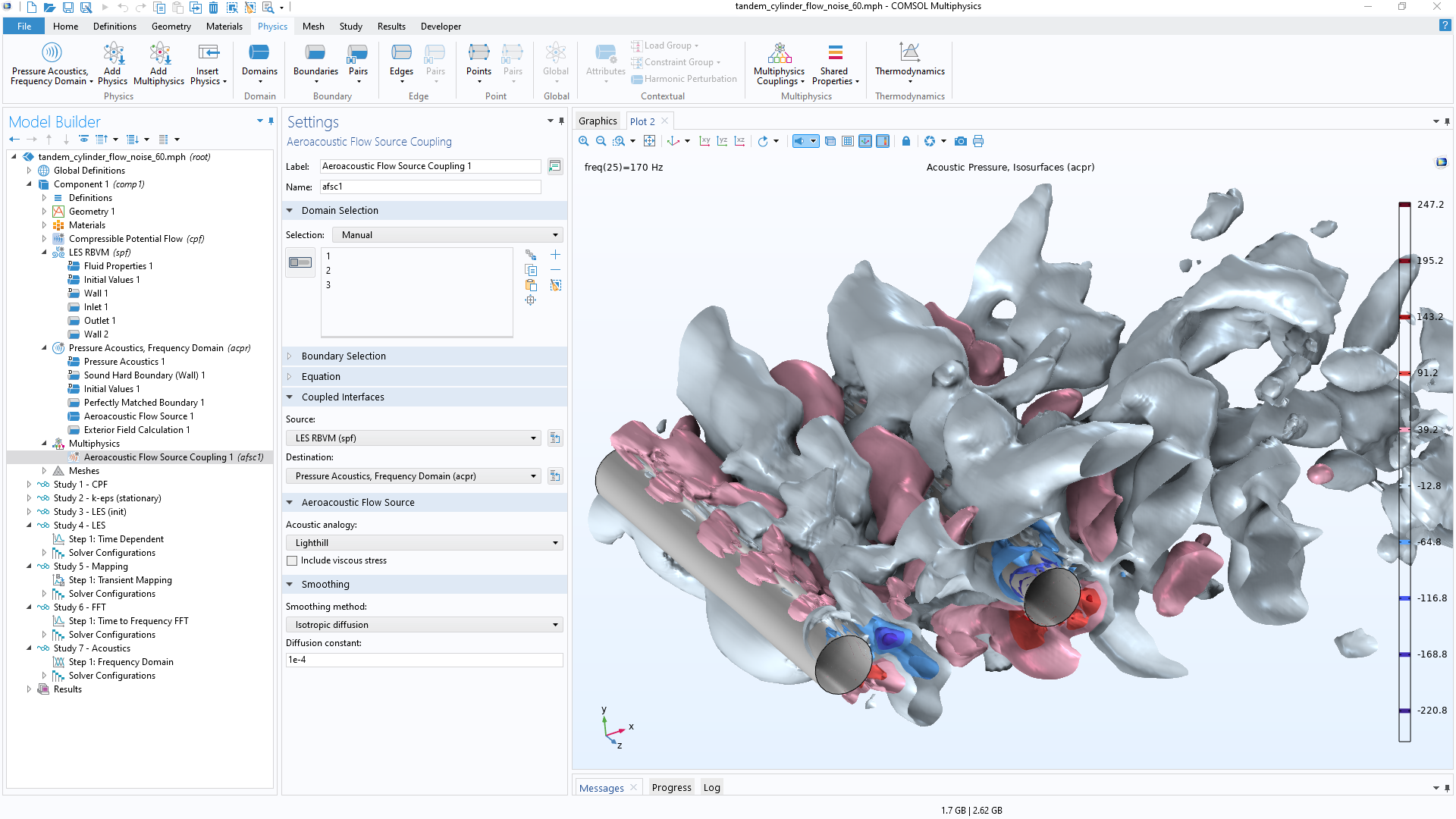 In addition, there are many improvements relevant for engineers working with nonlinear structural materials. For instance, the Nonlinear Structural Materials Module brings 10 times faster solving for creep models as well as new functionality for reduced integration, which gives performance increases for many nonlinear material models.

Version 6.0 brings a variety of improvements to the COMSOL Multiphysics platform product as well. Browse a few of the postprocessing, visualization, geometry, and meshing updates below.

You will now have the ability to use interactive clipping functionality to implement cross sections when clipping a solid domain. This capability makes it simpler to work with complicated CAD geometries. Another new feature allows you to create an array of plots to see multiple results side-by-side in the Graphics window. For example, in the image below, you can see an array of plots that show the spreading of a liquid sample in a rapid test strip at four different time steps. 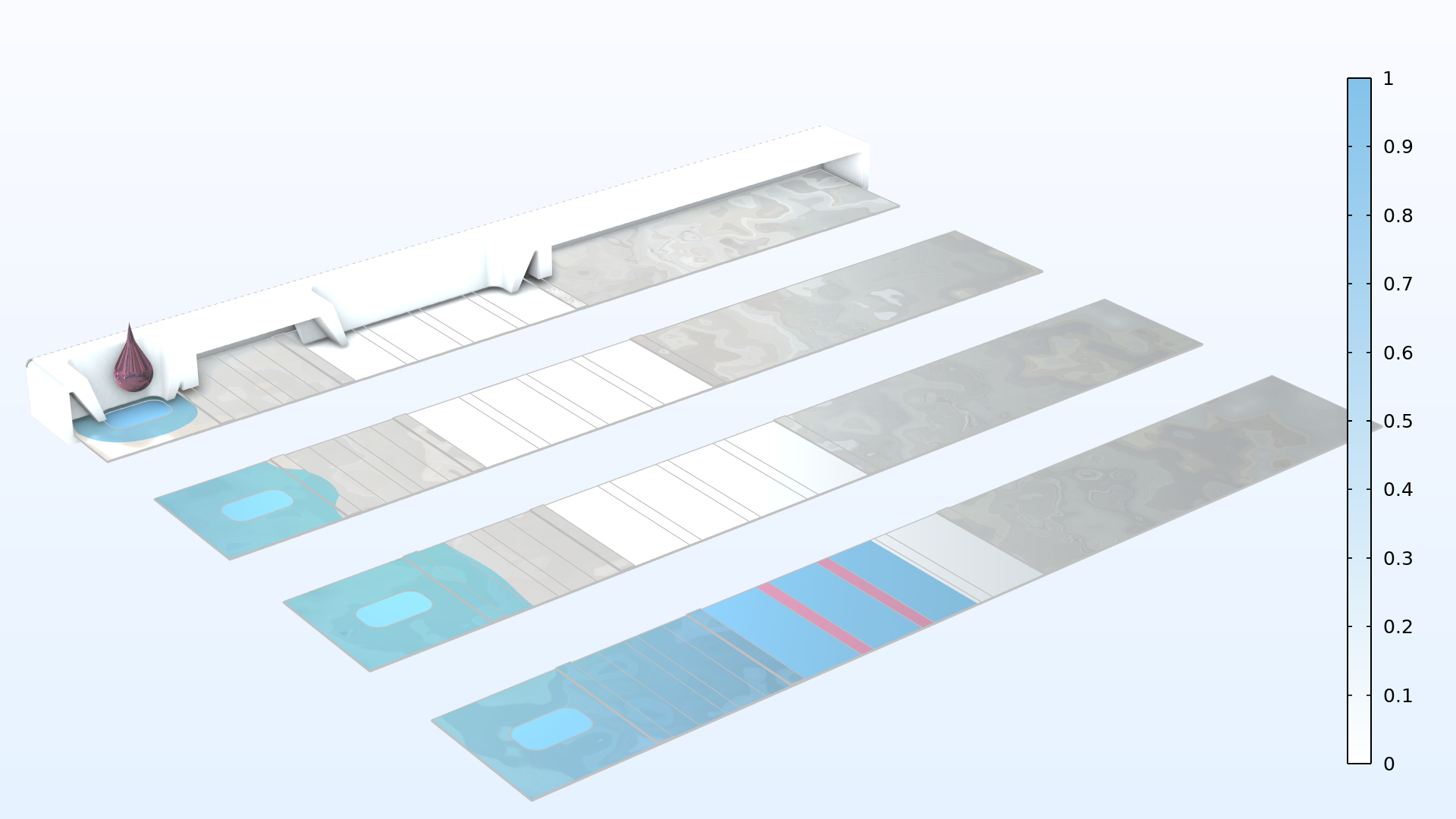 In addition, you will have the ability to make your geometry appear more realistic with the new Ambient Occlusion option available in the Graphics window toolbar. There are also several new and improved color tables to further expand the range of visualization capabilities in COMSOL Multiphysics. 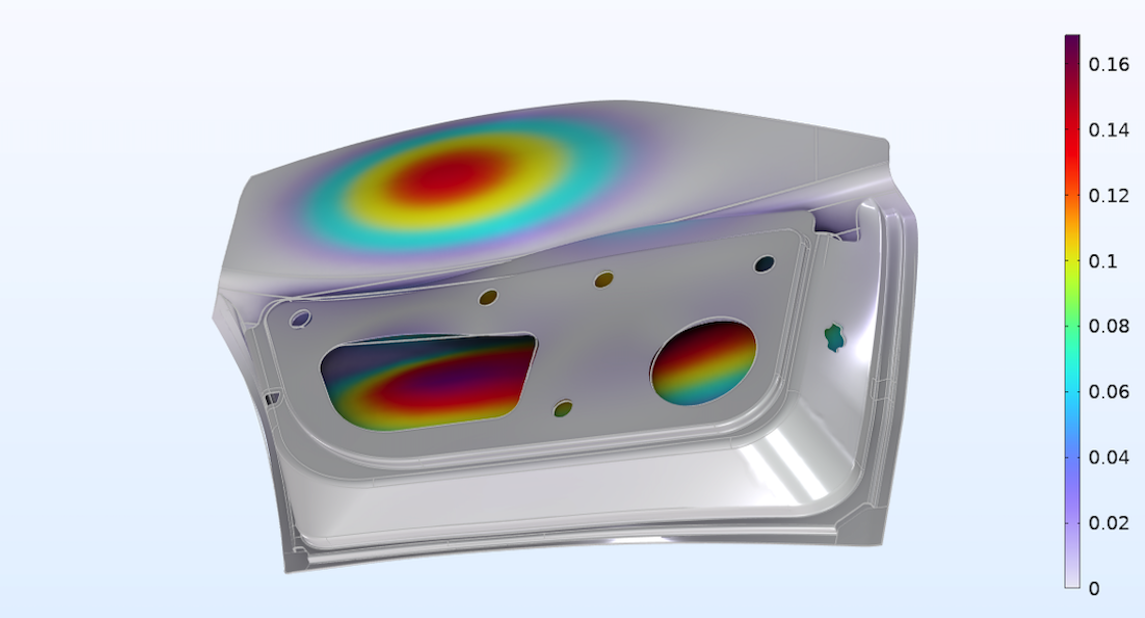 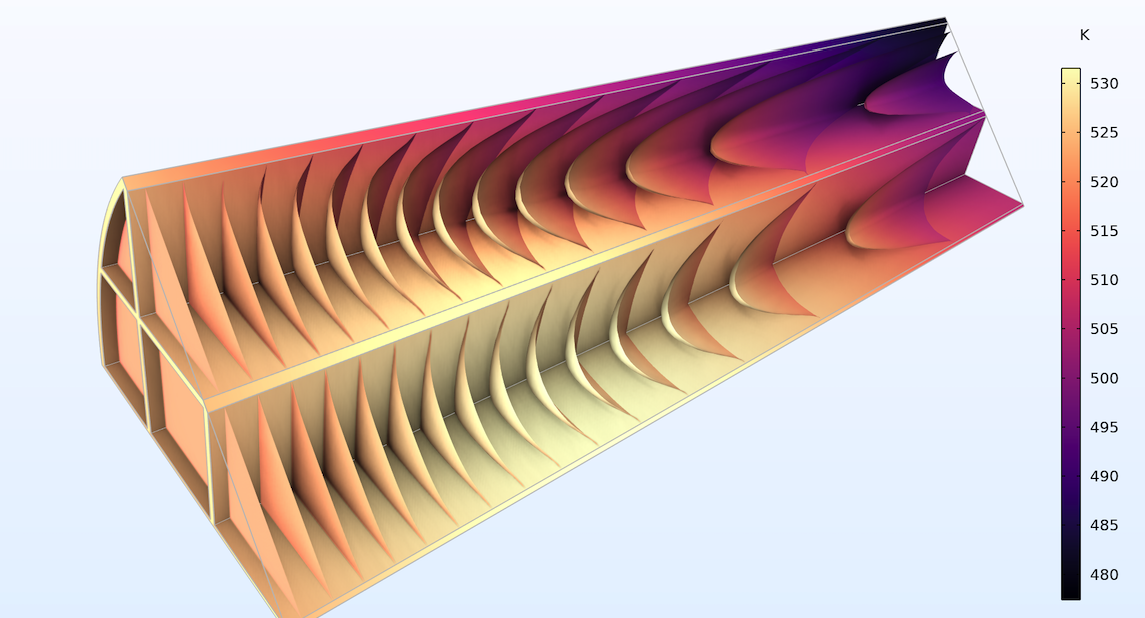 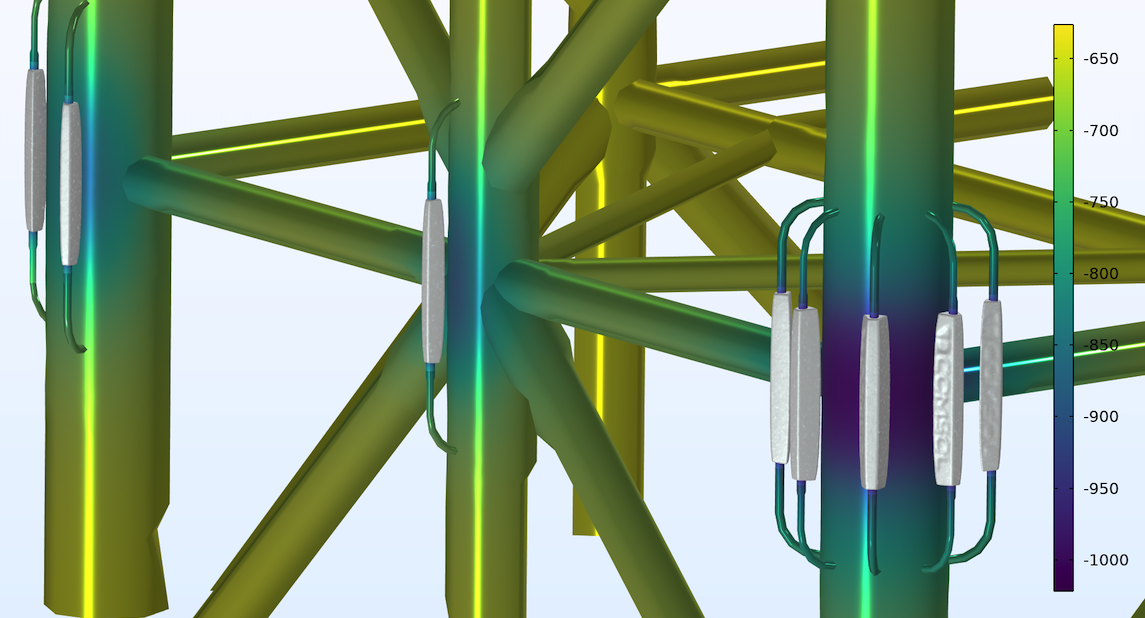 Many significant meshing improvements have been introduced with the latest release. For example, a new Union operation is available for uniting intersecting imported surface meshes on, for example, the STL file format. The feature provides you with a robust way to combine such meshes. In addition, boundary layer elements can now be easily added to imported meshes. A few other updates include:

The new version includes a variety of geometry updates, including but not limited to faster build of a previously built geometry node, Group nodes in the Model Builder, and 2D Offset and Thicken operations.

What’s new in the Application Builder? Version 6.0 brings an improved debugger in the Method Editor, which can be used to inspect and change variables and declarations when debugging. A new Main Window Editor is also present in the latest version. It works like the Form Editor, but for components that were previously only editable from the Application Builder tree: the ribbon, menu bar, and main toolbar. In addition, there is a new Gauge form object, which works similarly to the Knob form object. However, it is read-only and displays a value by the position of a needle on a gauge. 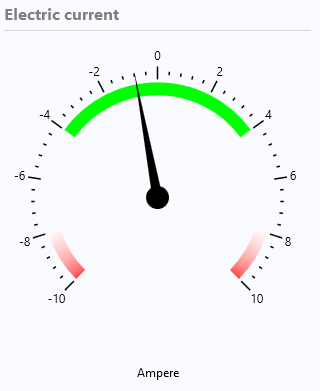 The new Gauge form object used to display the electrical current in a device.

Browse all of the updates COMSOL Multiphysics® version 6.0 brings and download the latest version:

Is there a manner how to use deformed geometry or moving mesh in stationary study in this version.