It’s likely that you’ve heard or read about many of the exciting discoveries in particle physics research at Fermilab. Powerful particle accelerators, including the Booster synchrotron with its unique ferrite-tuned RF cavities, consistently bring the lab to the forefront of discovery. Upgrading the 40-year-old Booster RF cavities will enable them to produce and sustain particle beams at even higher intensities… but will they overheat? Learn how the engineers at Fermilab address this important design challenge.

Behind discoveries such as the tau neutrino and bottom quark is a continually evolving chain of particle accelerators that has consistently provided high-intensity beams for particle physics experiments at Fermilab since the 1970s. At an intermediate stage of the accelerator chain is a cyclic particle accelerator (shown in the figure below), which is located about 20 feet below ground and is known as the Booster synchrotron. As its name implies, this synchrotron boosts the energy of incoming particles by a factor of 20 before they are transferred to the main injector or underground beam lines for experiments. 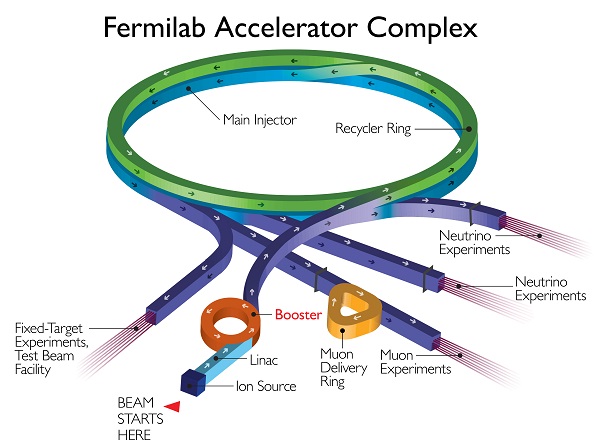 The Fermilab accelerator chain showing the location of the Booster synchrotron.

Presently, there are 19 ferrite-tuned RF cavities spaced throughout the 474-meter Booster synchrotron tunnel. These RF cavities are the workhorses responsible for accelerating an incoming beam of positively charged protons, while additional bend magnets keep the particles moving in a circular trajectory. The RF cavities of the Booster currently support a repetition rate of 7 Hz, which indicates how often particles are generated and sent through the accelerator chain.

A copper ferrite-tuned RF cavity removed from the Booster synchrotron (left) and one of the ferrite tuners (right).

The Booster RF cavities, shown in more detail in the following diagram, are half-wave resonators designed with a size and shape that enables operation over frequencies from 37 MHz to 53 MHz. 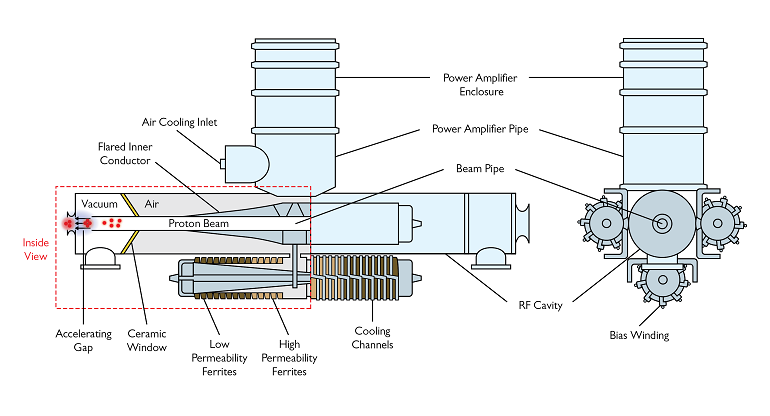 Front- and side-view drawings of a Booster RF cavity.

Around the exterior of the cavity, you’ll find a tetrode power amplifier supplying the RF signal in addition to three coaxial ferrite tuners providing a variable load. By using three ferrite tuners spaced at 90-degree intervals around the cavity, the power loss density per tuner is reduced, thus aiding in keeping the operating temperature lower.

Protons cycling through the Booster enter each RF cavity in succession, where they are accelerated along the central beam pipe by oscillating electromagnetic fields. Protons will continue to cycle through until they reach their target energy of 8 GeV. To reach this target energy, the frequency of oscillation is rapidly increased by varying the bias on the ferrite tuners.

With upcoming experiments at the lab requiring higher intensity beams, the Proton Improvement Plan (PIP) is currently being enacted under the leadership of William Pellico and Robert Zwaska to ensure that the particle accelerators can meet these demands. Modernizing the particle accelerators, including the Booster, will enable them to produce and sustain particle beams at double the current intensity through 2025. For the Booster RF cavities, this means they will need to be upgraded to operate at a 15 Hz repetition rate — that’s double the current rate — and possibly at a higher accelerating voltage.

From the Accelerator Division at Fermilab, John Reid is coordinating the challenging process to refurbish, qualify, and test the unique ferrite-tuned RF cavities of the Booster in accordance with the PIP. Mohamed Awida Hassan and Timergali Khabiboulline, from the Superconductivity and Radiofrequency Development Department, are working together with Reid to ensure that electromagnetic losses do not lead to overheating of the RF cavities and tuners reducing their lifetime. In a recent interview and article about their work, Hassan explains that they “are using both multiphysics simulation and physical measurements, provided by colleagues in the Accelerator Division, to evaluate the RF, thermal, and mechanical properties of the Booster RF cavities.” 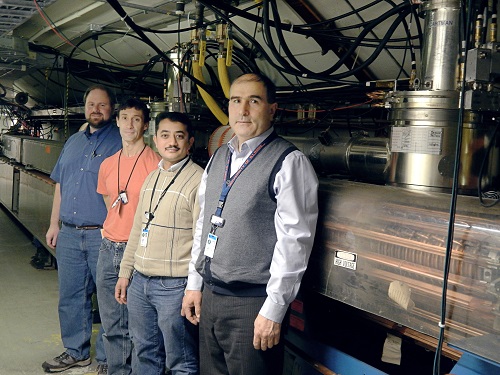 The engineers featured in this article kindly gave up a few minutes of their time for a photograph in the Booster tunnel while the synchrotron was down for routine maintenance. From left to right they are: Robert Zwaska, William Pellico, Mohamed Hassan, and Timergali Khabiboulline. (John Reid was unavailable for the photograph that day.)

Doubling the hourly proton yield from the Booster synchrotron places new demands on the 40-year-old ferrite-tuned RF cavities. Increasing the repetition rate and accelerating voltage is projected to increase the power dissipated in the RF cavities and tuners, potentially causing them to overheat. Physical measurements of temperature, although they are performed, are difficult to acquire and often inaccurate. Therefore, measurements are used in conjunction with thermal analysis in COMSOL Multiphysics® to estimate the additional cooling requirements of the upgraded RF cavities to ensure stable long-term proton production.

Hassan and Khabiboulline set up the RF cavity model as shown in the following screenshot of the COMSOL Desktop®. 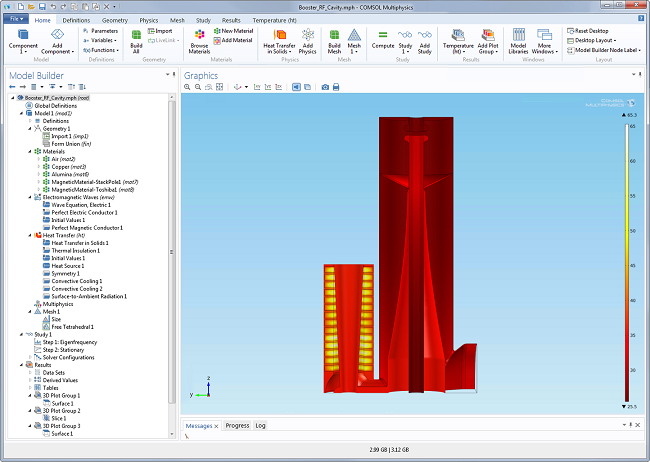 Screenshot showing the setup and analysis for a multiphysics model of a Booster RF cavity with ferrite tuners. A surface plot of temperature is shown in the Graphics window.

In their model, RF analysis was initially performed to solve for the electric and magnetic fields that are used as heat sources in the thermal analysis. The results from their analysis confirm that a temperature increase of more than 40°C could occur when going from an accelerating voltage of 55 kV and repetition rate of 7 Hz to 60 kV and 15 Hz.

To help reduce the time, risks, and expense associated with upgrading the RF cavities, the simulation results are being used to facilitate design decisions with regard to the cooling mechanism. It is anticipated that an upgraded Booster will aid in the production of more protons for another decade of intense physics discovery.