Healthcare-associated infections (HAI) affect millions of people around the globe. While the most common cause of HAI is direct contact with the source, airborne bacteria may also play a role in patient infections. To prevent airborne infection and make hospital clean rooms safer, it’s important to design efficient ventilation systems. As an added benefit, efficient ventilation designs also lead to lower energy-related costs. The first step to a better design is CFD modeling.

Healthcare-Associated Infections Are a Global Concern

Healthcare-associated infections are a serious concern for patients admitted to hospitals worldwide, in developed and developing countries alike. According to the World Health Organization (WHO), hundreds of millions of patients are affected globally each year. They further suggest that at any given time, seven out of a hundred patients in developed countries and ten out of a hundred patients in undeveloped countries are infected at least once during their hospital stay. This is in addition to the health reason that brought them into the hospital in the first place. Think about that for a minute. 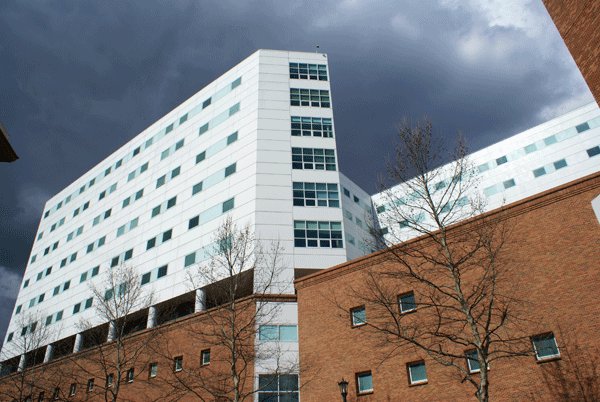 So why are people getting more sick when seeking treatment and how can we stop it? There are various factors that promote HAI. Perhaps the most obvious culprit is direct contact with the infected source (person, equipment, furniture, etc.). However, as Alireza Kermani of Veryst Engineering pointed out at the COMSOL Conference 2015 in Boston, another culprit may be inefficient ventilation systems. To validate their theory, Veryst turned to CFD software.

Using the COMSOL Multiphysics simulation platform and the CFD Module, Veryst was able to analyze the airflow pattern in a hospital room and investigate how airborne bacteria is dispersed throughout the room.

The clean room model used for evaluation included people (patient and doctor); furniture (bed, wardrobe, and lamp); medical equipment; and a ventilation system (inlet and exhaust). The patient in question is coughing, thus spreading bacteria particles into the room. The model accounts for both forced and natural ventilation, with a ventilation rate of six air change per hour (ACH). This is the ASHRAE standard 170 ventilation rate for healthcare facilities. 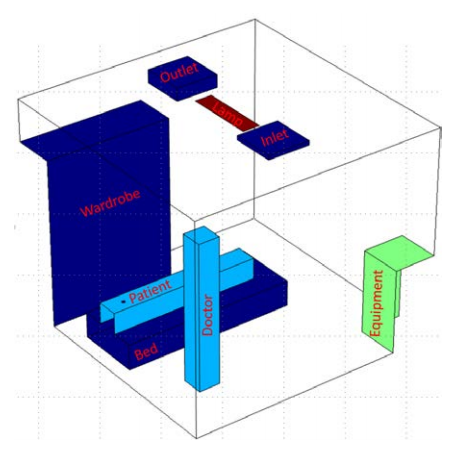 Layout of the hospital clean room. The room is thermally isolated on three sides and its base. The ceiling and the wall opposite of the wardrobe exchange heat with the outside. Image taken with permission from Veryst’s paper titled “CFD Modeling for Ventilation System of a Hospital Room“.

Veryst included the following heat sources in their model:

They found that the average temperature of the clean room was 21°C. Here are their simulation results, depicting air flow and temperature distribution in the hospital room: 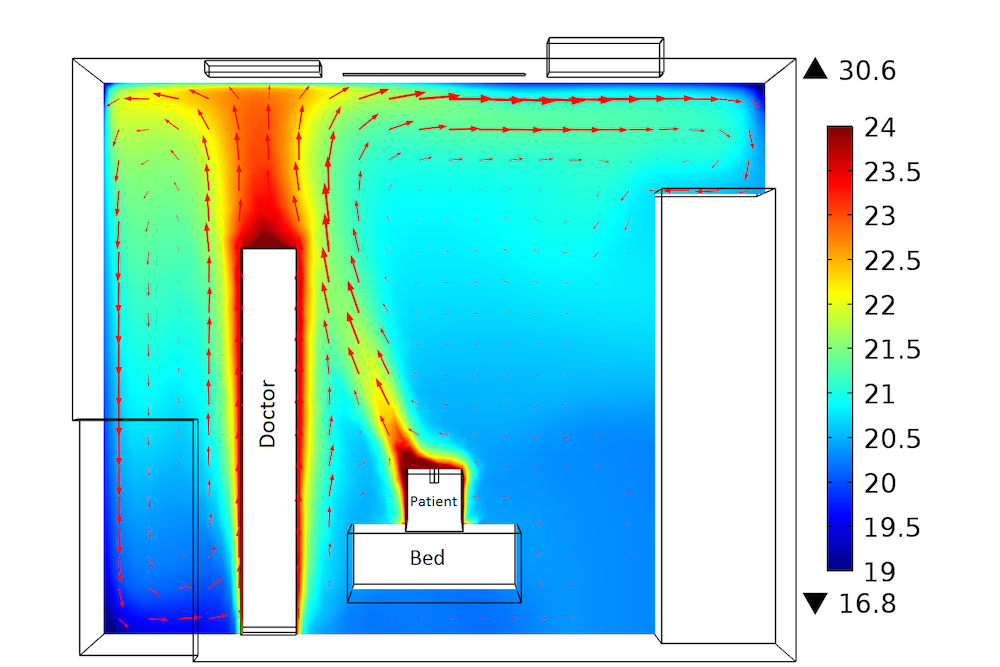 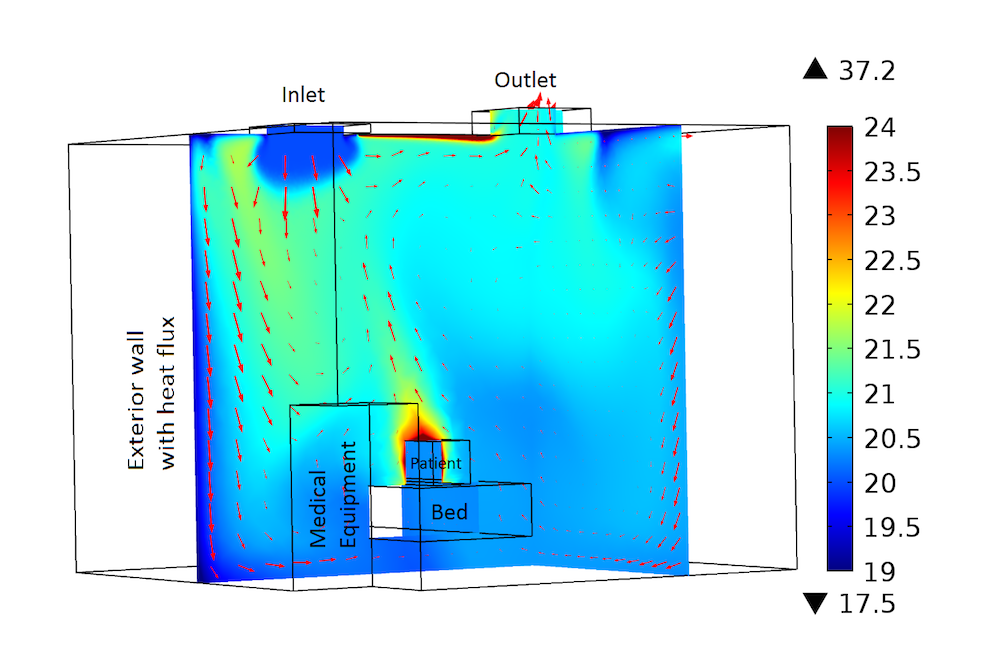 When designing a ventilation system that is good at preventing airborne infections, it’s also important to make sure that the design does not result in an uncomfortably hot or cold room. Of course, thermal comfort is highly subjective, but there is a way to quantify this qualitative metric. When evaluating the ventilation system design, Veryst relied on the ASHRAE Standard 55-2013 thermal sensation scale for quantifying thermal comfort:

ASHRAE thermal sensation scale. An acceptable indoor value is between -0.5 and +0.5. Table adapted with permission from Veryst’s paper titled “CFD Modeling for Ventilation System of a Hospital Room”.

Then, they calculated the PMV and predicted percentage of dissatisfied (PPD) patients for their simulation results and compared them with the scale. They found that with the current design and their assumptions about the patient’s metabolic rate and what (s)he is wearing, 56% of people would be dissatisfied because they would feel cool (PMV = -1.59).

Finally, Veryst was able to quantify the percentage of bacteria that is leaving the hospital room through the exhaust of the ventilation system with COMSOL Multiphysics and the Particle Tracing Module. 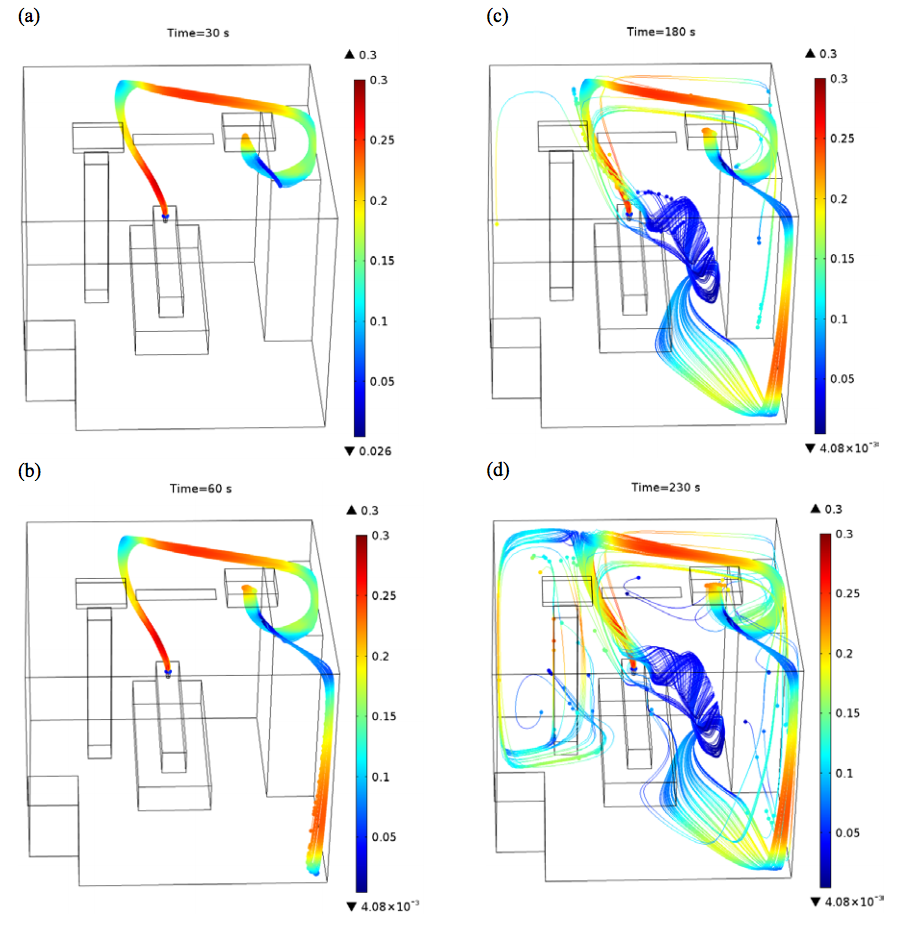 Plots showing the motion of bacteria particles at 30, 60, 180, and 230 seconds after the patient coughs. The particle color corresponds to velocity (m/s). Taken with permission from Veryst’s paper titled “CFD Modeling for Ventilation System of a Hospital Room”.

To improve the ventilation system so that less bacteria stays in the room and the system is more energy efficient, while falling inside the acceptable thermal comfort range, you could run further simulations to optimize the design. Get the full details of Veryst’s research in their “CFD Modeling for Ventilation System of a Hospital Room” paper.

New to COMSOL? Learn all about the CFD Module via the button below. If you want to see the software in action, you can request a software demonstration directly from the product page.

Need some inspiration? Download the MPH-files for presolved CFD tutorials from the Application Gallery to get started.