Underwater adhesives are used extensively in the medical field, helping to heal and treat the human body — a very wet environment. In their pursuit to design stronger waterproof substances, researchers have drawn upon the natural adhesives produced by organisms living in the sea.

A Survival Tool for Sea Life

Maintaining stability amidst the harsh conditions of the ocean is often a challenging task for organisms. From the pull of tides to the crashing of waves, species of the sea are constantly subjected to the ocean’s shifting currents. For some organisms, the key to resisting this turbulence and pressure is through the production of underwater adhesives.

Take mussels, for instance. These creatures create thin, stretchy threads by first extending part of their foot outside of their shell. The mussel then takes the bit of flesh from the foot that is touching the surface and rolls it into a tube. Proteins known as peptides and other ingredients are discharged into the tube to create the fibers, which then prompts a chemical reaction that makes the materials inside the tube insoluble. 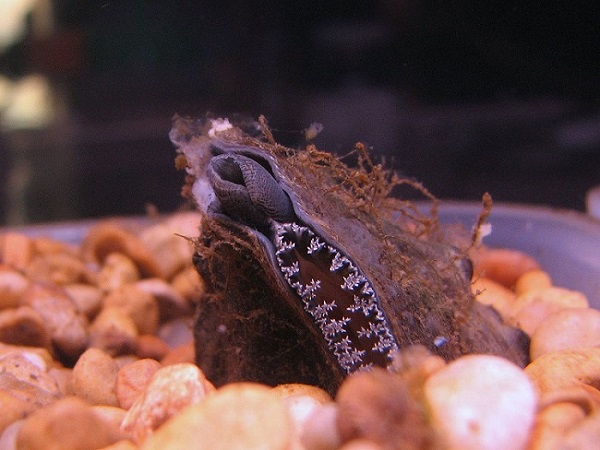 For the sandcastle worm, glue really does hold its world together. Found on the beaches of California, these organisms produce a sticky adhesive from an organ on their head and use it to build the tube they inhabit. The tube is comprised of small pieces of sand and shells glued together. The oppositely charged proteins in the adhesive create the glue bonds, forming a fluid denser than water. The establishment of strong bonds results in a tube that manages to stay intact underwater, providing shelter for the worm. 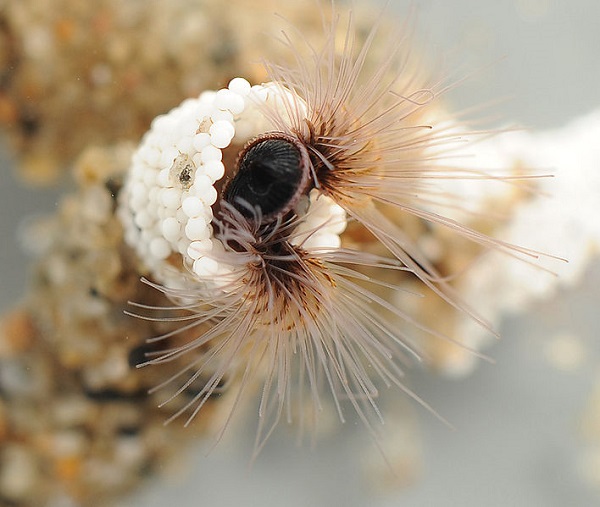 Sandcastle worms use natural adhesives to build a tube that provides them with shelter. Image by Fred Hayes for the University of Utah. Licensed under Creative Commons Attribution Share-Alike 3.0, via Wikimedia Commons.

This got researchers thinking — could the components of these natural adhesives be replicated in a synthetic form to build stronger underwater adhesives? The answer is yes.

From Natural to Synthetic: Underwater Adhesives

Recognizing the potential of these natural adhesives, a research team at MIT developed waterproof glue based on mussel foot proteins. To make this substance, an engineered bacteria was used to create a hybrid material comprised of mussel proteins and a bacterial protein that is found in biofilms. The combination of the naturally sticky mussel proteins and the slimy layers formed by the bacteria resulted in a strong underwater adhesive — an adhesive even stronger than that of the mussels.

Featuring a normal but flexible structure, the hybrid material was found to strongly bind to dry and wet surfaces. In addition to potential use in ship repairs, this synthetic glue is also noted as a possible method for healing wounds and incisions from surgeries.

At the University of Utah, researchers from the Department of Bioengineering created synthetic polymers mimicking the chemistry of the adhesives produced by the sandcastle worm. The polymers are charged and join spontaneously to form a “water-immiscible fluid”. The synthetic adhesive does not mix with water and, consequently, does not swell. The polymer was also noted for its strength as well as its relative inexpensiveness.

While this particular research focused on the use of the adhesive in treating fetal membrane ruptures, additional studies have also recognized the use of similar adhesives in repairing heart tissue and shattered bones.

Next Steps in Research

By drawing on the natural adhesives created by organisms in the sea, researchers have paved the way for the development of more reliable underwater adhesives. With previous testing successfully conducted on animals, future research seeks to build upon this foundational work and ensure the safety of such substances within the human body. With its wide use in the medical field, adding components to ensure the control of infections will also be an area of focus for researchers.