Simulating a MEMS-Based Pressure Sensor Inspired by a Cave Fish

Many aquatic vehicles use power-hungry active sensing methods to detect and identify objects within an oceanic environment. In order to find an energy-efficient alternative, a team of researchers from the PSG College of Technology in India used numerical simulation to investigate a pressure sensor design inspired by a blind cave fish. In this blog post, we’ll take a closer look at this passive MEMS-based pressure sensor.

Aquatic environments aren’t welcoming spaces for man-made crafts. Lack of light and murky waters make visibility difficult or even nonexistent at times. Underwater vehicles such as submarines need to detect, monitor, and avoid objects in these conditions. If this isn’t hard enough, submarines have a limited energy supply and need to be as energy efficient as possible. 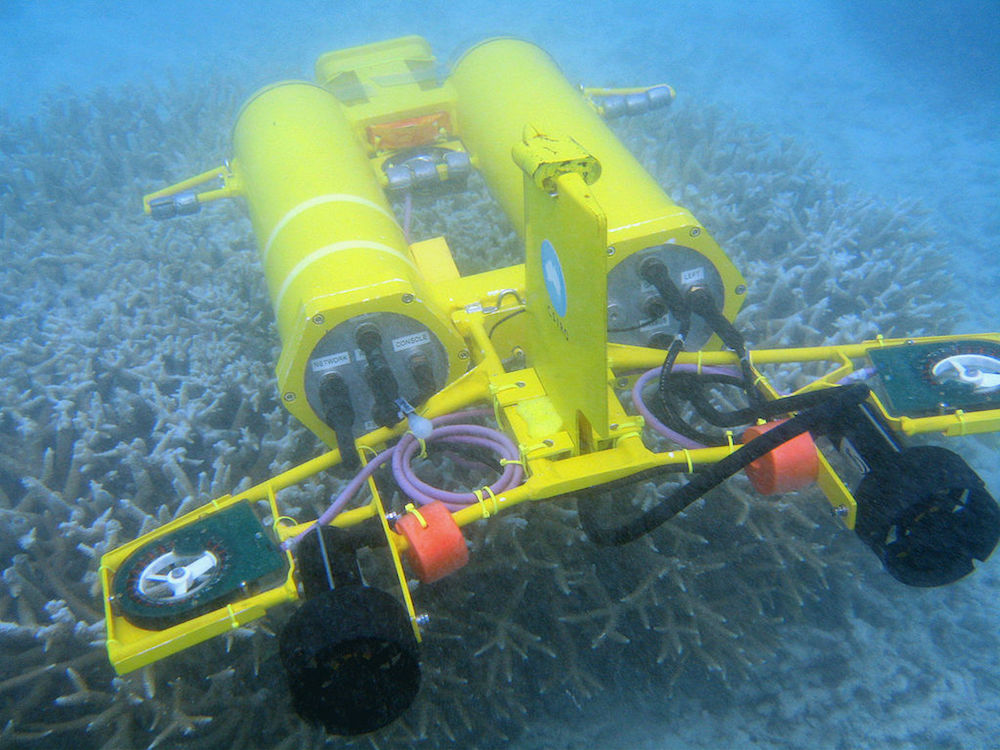 An image of an autonomous submarine. (By the CSIRO ICT Centre. Licensed under Creative Commons Attribution 3.0 Unported, via Wikimedia Commons.)

Many conventional submarines use sonar and optical methods to navigate their surroundings. These methods work, but they have drawbacks. Sonar can harm or kill marine organisms and optical methods don’t function well in low visibility conditions. Additionally, both of these methods utilize active sensing, which uses energy and can be inefficient.

When searching for a more efficient way for aquatic vehicles to monitor their surroundings, a team from the PSG College of Technology, Coimbatore, Tamil Nadu, India looked to a blind cave fish for inspiration.

An image of a blind cave fish with lateral lines shaded. The dots within the lateral lines represent the canal neuromasts. Image by Aarthi E. et al., and taken from their COMSOL Conference 2013 Bangalore paper submission.

Perhaps the most important aspect of this cave fish is that it performs passive sensing to study its environment. This means that the fish can navigate its environment without spending energy to emit waves that can cause harm or reveal its location. Instead, this fish passively senses the flow of water around itself.

By using the COMSOL Multiphysics Laminar Flow interface, the researchers were able to predict the performance of their underwater pressure sensor design based on this energy-efficient passive sensing method.

To build a pressure sensor that can function passively, the researchers mimicked the cave fish’s lateral lines.

When designing the pressure sensor, they arranged ten sensors in an array that is similar to that of the cave fish, with spaces to avoid crosstalk. This design also has a flexible sensing diaphragm mounted over the base of the sensor. The sensing layer is made out of a liquid crystal polymer (LCP), which is flexible, tough, and has good corrosion resistance.

Above this sensing diaphragm are strain gauges, which are used to convert pressure change into resistance change in gold piezoresistors. Finally, a standing structure mimics the fish’s superficial neuromast and measures velocity. 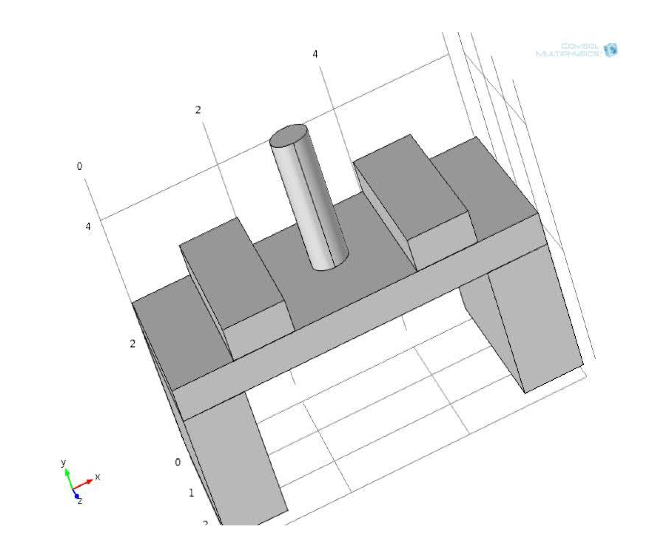 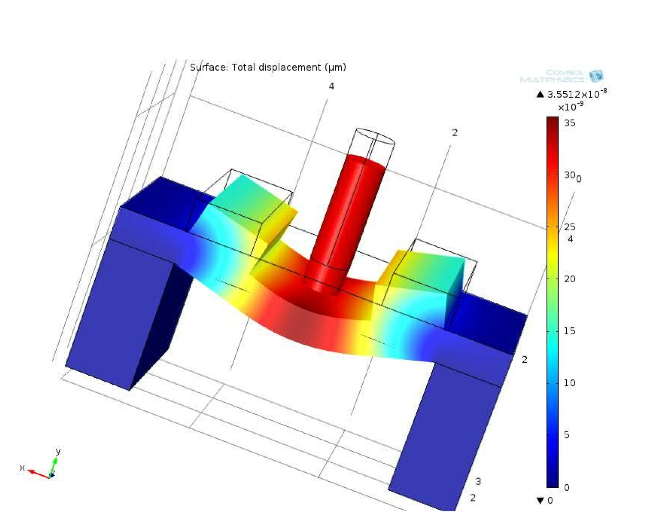 This bending causes a change in the resistance value of the piezoresistors, which can be read as a voltage shift. In this way, the pressure sensor is able to passively detect changes in its environment, such as the changes caused by the sunken ship.

This device could allow submarines to easily navigate their surroundings without wasting energy. But first, the researchers had to check how well the pressure sensor works. 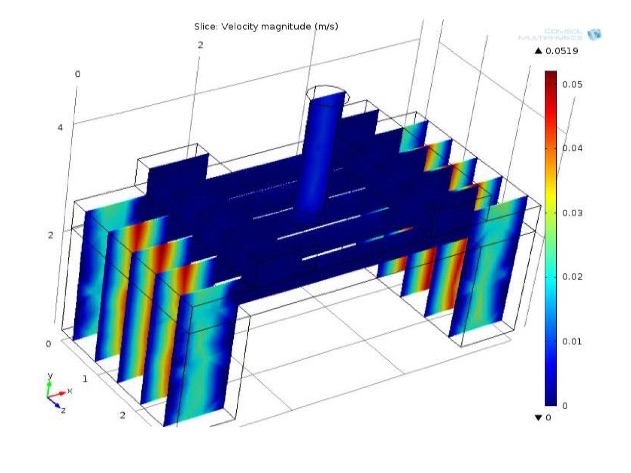 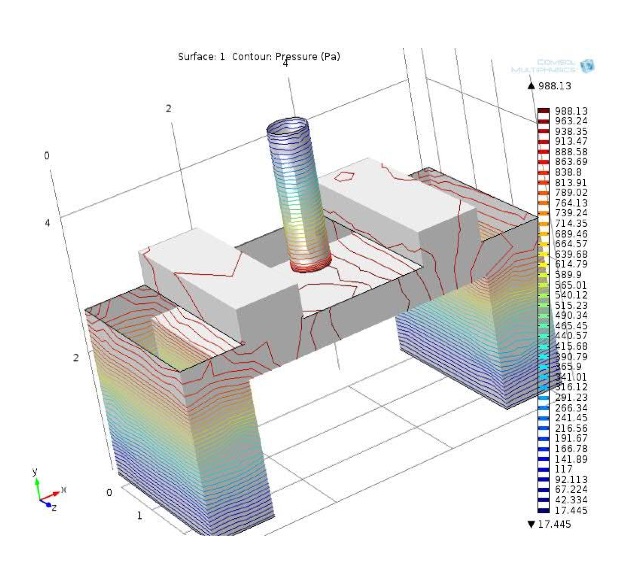 The simulations revealed that the sensor experienced changes in both velocity and pressure when the boundary stress increased. These are the same changes that the blind cave fish detects, but how sensitive is the pressure sensor to these changes?

Overall, this passive pressure sensor is not only sensitive enough to function well, but also energy efficient, safe, and stealthy. This design is a good energy-efficient alternative for underwater pressure sensing applications. The fluid-structure interaction feature, the piezoresistivity physics interfaces, and the hyperelastic material models available in the COMSOL software make it straightforward to simulate this kind of sensor.