Magnetic levitation, or maglev, involves suspending materials with magnetic fields. When gravity, acceleration, and other forces weigh down on an object, they can all be counteracted by magnetic pressure. Some uses that may appear to go completely against nature can actually be explained by fundamental science.

When Mail Could Float

Many uses of magnetic levitation seem like fiction to me. From levitating frogs — an experiment that earned its designer an Ig Nobel prize in 2000 (and he actually won a Nobel prize for discovering graphene, twelve years later) — to a bed that gently floats in the middle of a bedroom, it’s hard to believe that this technology has been viable since the 1900s, around when Emile Bachelet designed and patented the first electromagnetic suspension system. The device’s sole purpose was to transfer mail on a cart that levitates above a magnetic track. Just imagine entering a 1900s French post office where the mail glides across a sorting room… 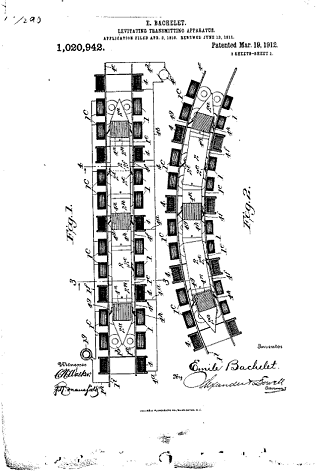 This invisible power has been used in many applications since. You may have read about some important uses of maglev in the recent blog posts about using COMSOL Multiphysics to simulate permanent magnetic bearings and eddy current brakes. The magnetic levitation phenomenon begins with the very basic concept that magnets with opposing polarities attract and magnets with same polarities repel, and from there the level of intricacy of its potential applications is boundless.

Melt it in Mid-air

Dr. Roland Ernst, a researcher at SIMAP-EPM Laboratory in Grenoble, France, was able to improve upon existing magnetic levitation technologies that changed the way materials can be produced. He wanted to improve the process of creating pure titanium, which is useful in the production of everything from automobiles and sporting goods to ultrasonic welding and sputtering targets. He began with a cold crucible, a device used to create alloys that require a pure environment in order to be formed. The device stays cool on the outside while the materials within get so hot they become molten. 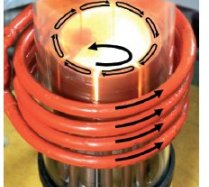 A photograph of the cold crucible,
with arrows that indicate the direction
of current in the external coil and
sections.

Dr. Ernst’s cold crucible design is made up of several intricately-designed parts. Its basic component is a quartz cylinder that acts as a controlled atmosphere chamber with a coil wrapped around it to conduct electricity and create the medium or high frequency magnetic field. The coil is a 4-turn helical inductor made of a small copper tube. Inside the quartz insulator are several evenly-spaced, conductive sections made of copper. Between these components are very tiny separations of about half a millimeter. Each sector acts like a short-circuited secondary whose primary is the inductor. Thus the magnetic field produced by the inductor is transmitted inside the sections building the cold crucible.

The raw titanium is placed within the cylinder. When a high or medium frequency current is passed through the coil, it induces a current within each section of copper and in the titanium charge. The current begins to melt the raw material. This process of heating conducting materials via the induction of electric current is called induction heating. If the titanium is simply heated in a container, the boiling hot alloy could come in contact with the container wall. This could lead to a physiochemical reaction that corrupts the alloy with impurities. Because of the nature of the device, this type of interaction is almost unavoidable. Dr. Ernst was able to find a solution, though. The magnetic fields from the coil and the copper sections work together to actually lift the melting blob of hot molten titanium to the center of the crucible. Dr. Ernst did the simulation legwork for his design using COMSOL Multiphysics, noting that “the models are easy to set up and especially efficient with the COMSOL Multiphysics impedance boundary condition, even with the low-skin-depth high-frequency conditions we use. The results show me how the electromagnetic fields behave over whatever full 3D geometry I need.” Dr. Ernst’s cold crucible lifts the titanium alloy away from the crucible walls, repelled by magnetic levitation, and literally melts it in mid-air! 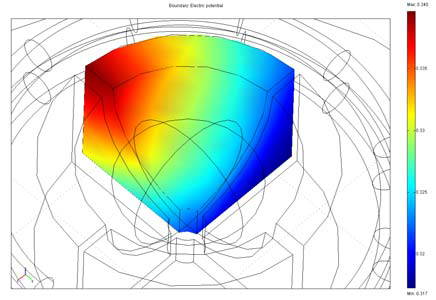 Electric potential distribution in one sector, modeled in COMSOL Multiphysics.

While many designs are currently in a testing phase, there are several operational maglev trains that you can try out yourself in Japan, China, and South Korea. These trains are able to travel very fast because they are magnetically raised above the track such that the friction between wheel and track is removed. Maintaining maglev trains presents its own set of challenges, including safety and resource concerns, but these trains are an exciting innovation among railway systems.

The personal rapid transit system, SkyTran, designed by NASA Ames and UniModal Inc., is an ongoing project intended for installation in Tel Aviv a few years from now. These small, two-person pods would travel at extremely fast speeds with the power of magnetic levitation. Instead of wheels, the vehicle would move forward with magnetic repulsion created by its own motion over shorted wire coils in the track. 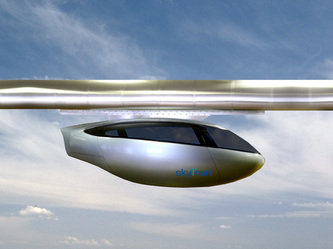 Scientists who are passionate about space travel have proposed ideas like the Startram Orbital Launch System; this kind of large-scale project might be difficult to achieve, but could potentially lift thousands of tons of cargo out of the atmosphere much more cheaply and efficiently than the current chemical-propellant-based launch systems in use. The Startram vehicles would be levitated in air using a combination of superconducting magnets and an electromagnet created via an induced current. Phase lock coils that generate forces on the launch vehicle’s electromagnets would create the necessary propulsion. A major drawback of the current magnetic levitation trains is that they are limited by atmospheric drag. Maglev orbital launch systems and other proposed technologies could be designed with air-tight tubes for vehicles to jet along, free of drag. Without air resistance, objects can travel at unbelievably fast speeds. Are there any everyday experiences that you think could be improved by magnetic levitation?