Using a Simulation App to Evaluate Fatigue Life in a Frame

Simulating fatigue offers valuable insight into how stress can affect the longevity of a structure and its components. This can help identify potential design problems and pave the way for the development of a safer structure. Arriving at this solution, however, often requires running several simulations to test different scenarios. Our Frame Fatigue Life demo app demonstrates how simulation apps can save you time and energy in evaluating the impact of fatigue.

The Importance of Analyzing Fatigue

In the real world, structures are regularly subjected to external stresses. The repetition of these stresses can cause structures to weaken over time, which can result in their failure. Simulation helps to identify weaknesses within designs before failure occurs by analyzing the impact of applied loads.

Oftentimes, many simulations must be run before reaching an optimized design. This is especially true when modeling fatigue, as small design changes have a large impact on the lifetime of the structure. Those without a background in simulation will rely on you to run new tests as modifications are made to the structure’s existing design. But what if there was a way to shift some of that workload into the hands of other individuals involved in the design and manufacturing process?

Using the Application Builder, you can turn your models into easy-to-use simulation apps. This tool will enable your colleagues and customers to run their own simulations on the app, which you can customize to include only the specific input parameters that are relevant to your design. Take our Frame Fatigue Life demo app, for instance, which can be used to evaluate the fatigue life in a frame with a cutout. Let’s explore this demo app and its features in greater detail.

The Foundations of the App

The Frame Fatigue Life demo app is based on a model of a thin-walled frame with a cutout. In this example, a random moment load is applied along the three principal directions on the right end of the frame; the left end of the frame remains fixed.

The geometry of the frame.

Within the frame, the cutout represents the critical part, as this is where fatigue can occur. The fatigue lifetime is significantly reduced if the cutout is a square, since sharp corners lead to increased stress in the surrounding area. The focus here is to predict fatigue life and stress distribution at the cutout, along with the relative usage factor at the critical part.

The Frame Fatigue Life demo app takes all of the physics and functionality behind the model and makes them available in a user-friendly interface. You can use this example as a foundation for creating your own fatigue life app, configuring its layout to meet your specific needs.

When building your own app, you have the ability to create a user interface (UI) that is tailored to your particular design. Depending on the focus of your analysis, you can decide which parameters to make available for modification within your app. As the simulation expert, you can program any sequence of model actions based on the app user’s click of a button, helping to reduce human error that can occur when several actions are required to make a change to the design.

Our Frame Fatigue Life demo app features input parameters that allow changes to the frame’s geometry. For further customization, user-defined load histories and materials can also be imported. Say an app user decides to test a different material or load history. In this case, the new input file will be automatically assigned to both fatigue steps after it has been imported. This reduces the level of human error that may occur if the changes are assigned to only one fatigue step rather than both of the steps.

Upon clicking the Solve button, necessary checks are applied to the inputs. If they are not correctly specified, a message displays to explain the mismatch, providing app users with the opportunity to correct their mistakes. It is possible that so many changes were made that it would be difficult to identify the exact point at which the error occurred. For these types of situations, the Reset to Default button can be used to revert the model back to its original state, offering a clearer picture of suitable parameter values, thus helping to identify the inaccuracy.

Once the proper inputs have been entered, the app solves for fatigue life in the designated frame. To achieve this, three study steps must be computed. The first study step computes the structural response to the applied moments; the following two study steps evaluate fatigue on each side of the shell element. When working with the Model Builder, this would mean having to solve all three studies manually. In the simulation app, however, all three steps are performed automatically once the Solve button is selected due to a scheme created with the Method Editor.

The simulation results from the app can be compiled into a report by clicking the Create Report button. The report for the demo app includes the predicted stress distribution, fatigue life, and relative fatigue usage at the critical part, as well as information on the original geometry. The app’s documentation file can be found under Open Documentation. 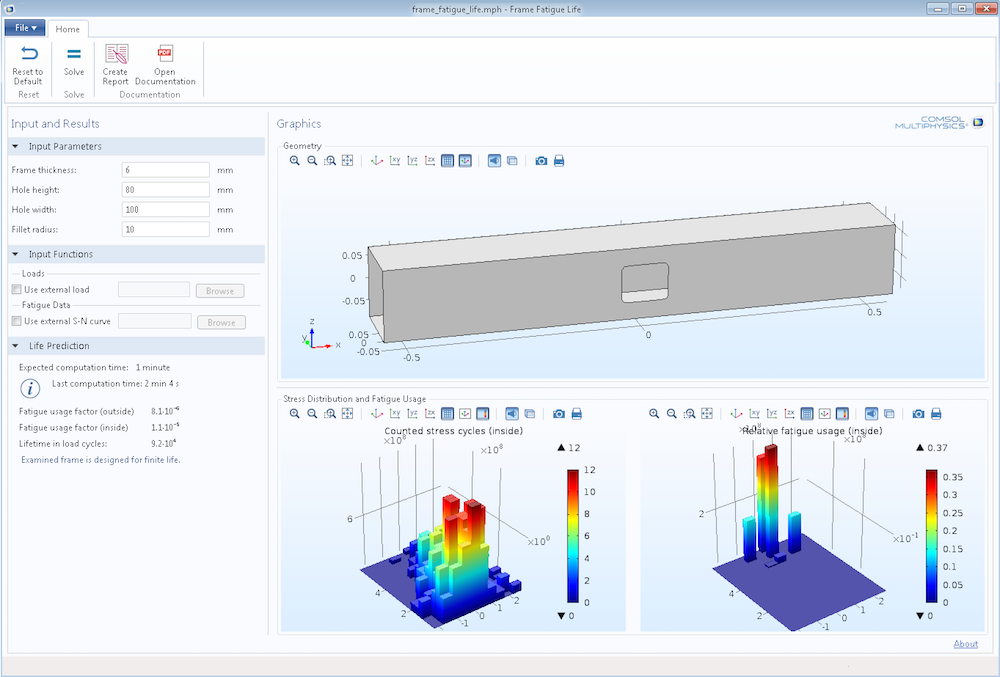 Apps mark a revolutionary step forward in simulation, hiding the complexity of models in a simplified and intuitive interface that can be used by individuals throughout an organization. Extending the power of simulation not only helps to lighten your workload, giving time for additional simulation projects, but it also promotes a more integrated approach to product design and development. We encourage you to use our Frame Fatigue Life demo app as a guide to creating your own app, establishing a more efficient way of designing safe structures.