In my youth, I spent a lot of my time attending sports practices and games. As I got older, my practices and games were scheduled later and later at night. Oftentimes, I would be on my way to play a game of soccer in the dark. However, when I stepped onto the field, it was almost as bright as daytime…

Counting on LED Technology on and off the Field

The lights bordering the field enabled my team and I to continue our games late into the night. 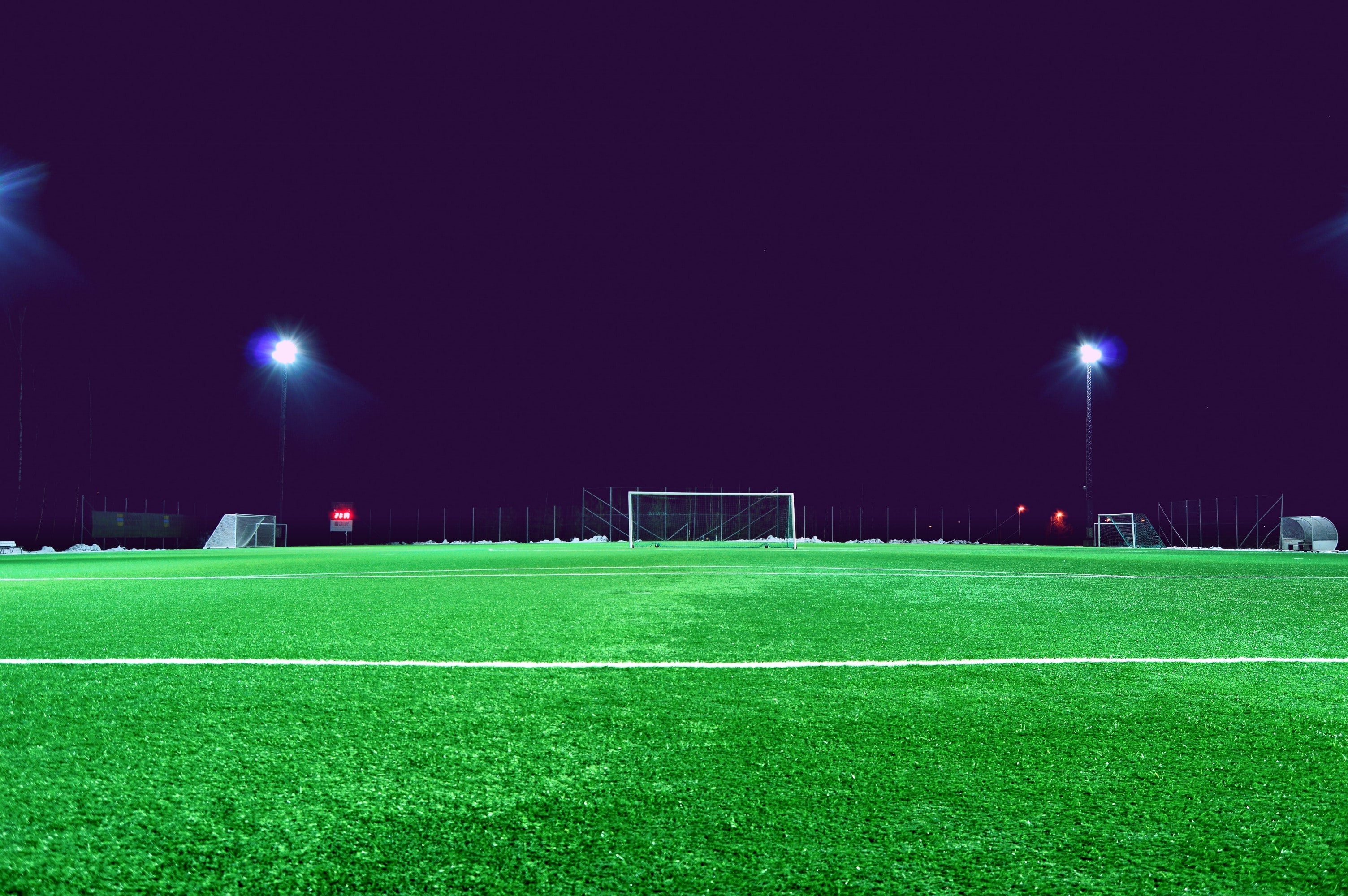 A well-lit soccer field at night. Photo by Jonathan Petersson on Unsplash.

My experience isn’t unique: Sports teams around the world have been playing and practicing at night for decades. However, in recent years, you might have noticed that some of these fields are better illuminated than they used to be. Why is that?

In an effort to be more sustainable, many sports organizations have opted to replace the conventional lighting systems in their stadiums with light-emitting diode (LED) technology. LED bulbs are not only more energy efficient than traditional incandescent bulbs but also a whole lot brighter. According to the United States Environmental Protection Agency (EPA), the benefits of “green sports” include:

One type of LED bulb commonly used to light various outdoor (and indoor) sports stadiums and courts is the LED corn bulb. Like an athlete fitting daily life and sports practices into one schedule, LED bulbs have to fit many functions into one system. With simulation, engineers can investigate and better understand the mechanisms behind LED technology. We’ll explore one example in today’s blog post.

Step into a hardware store, and after walking past the displays of patio furniture, grills, and outdoor power equipment, you are likely to find a section of LED corn bulbs neatly tucked away in an aisle dedicated to light fixtures. Here, you’ll see that they range in size, style, and cost. They are often made up of one or two hundred tiny light-emitting diodes that are lined up and secured on a metal or epoxy structure. Fittingly, LED corn bulbs are named after the vegetable that they resemble: corn on the cob. 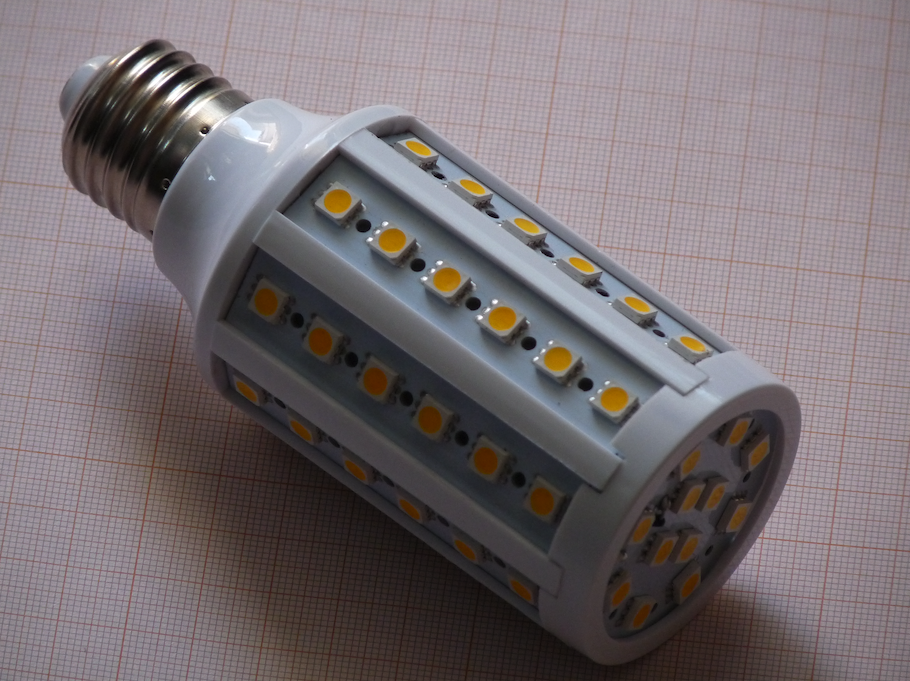 The unique shape of LED corn bulbs might be what catches consumers’ eyes, but it’s their energy efficiency that makes them a popular replacement for high-intensity discharge (HID) and incandescent bulbs. When compared to incandescent bulbs, LEDs are expected to use 75% less energy and have a lifespan of up to 25 times longer. (Ref. 1)

Since LED corn bulbs come in a variety of styles, they are suitable for both outdoor and indoor applications, illuminating everything from garages and warehouses to highways and stadiums.

The Challenges of Designing LEDs

Although LEDs are often considered to be more efficient than traditional bulbs, they are still not 100% efficient in turning electricity into light. Some of their power comes out as heat. This heat can get trapped in the bulb’s neck, which can cause the electronic components in the bulb (such as its chips) to degrade over time. As a result, some have noticed that LEDs last a fraction of the lifetime promised on their packaging. Therefore, thermal management is an important consideration when designing LED bulbs.

Heat transfer modeling can be used to optimize the geometry and materials of an LED bulb design and estimate the maximum temperature that will occur within the bulb. Here, we’ll explore a thermal model of an LED corn bulb.

The LED Bulb Cooling tutorial model estimates the temperature of an LED corn bulb by taking into account the heating of the LED chips, cooling from buoyancy-driven airflow, and radiation from the ambient surroundings. In addition, it also calculates the nonisothermal airflow inside and outside of the LED bulb by taking into consideration the coupling between energy transport and momentum transport.

The modeled bulb is made up of:

The total power of the bulb is 5 watts.

Below, you can view two different angles of a quarter of the LED bulb geometry. Note that the LED chips, made of epoxy resin, are shown in orange. The PCBs, made of aluminum, are shown in brown. 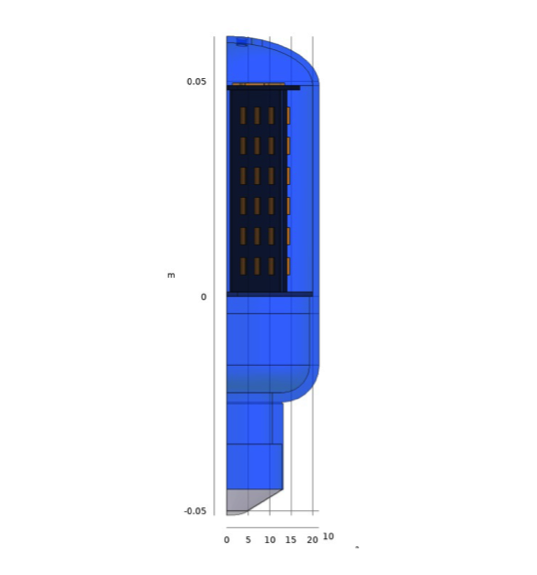 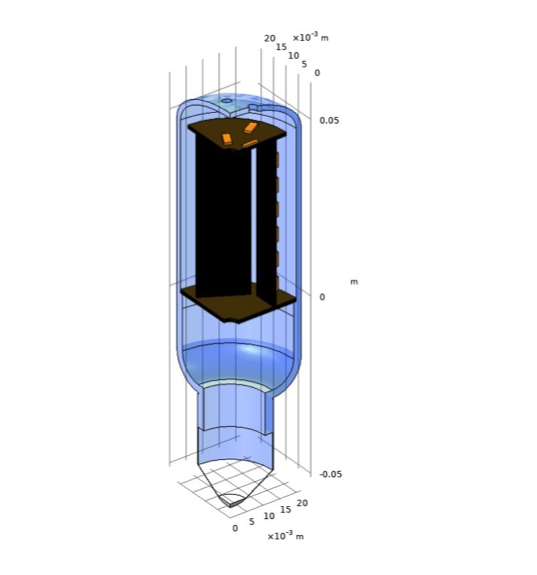 The Heat Transfer in Solids and Fluids and Laminar Flow interfaces are used to compute the temperature distribution and velocity magnitude of the airflow inside and outside of the bulb.

As shown in the results below, the LED chips in this study reach a maximum temperature of ~76°C. The maximum velocity magnitude of the natural convection of flow is ~0.2 m/s. 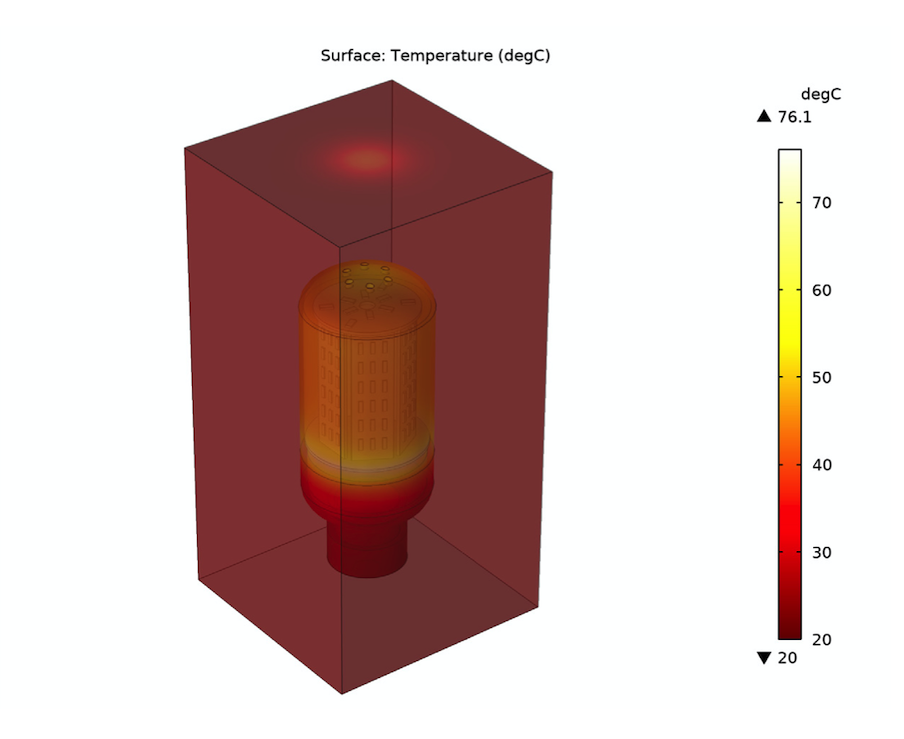 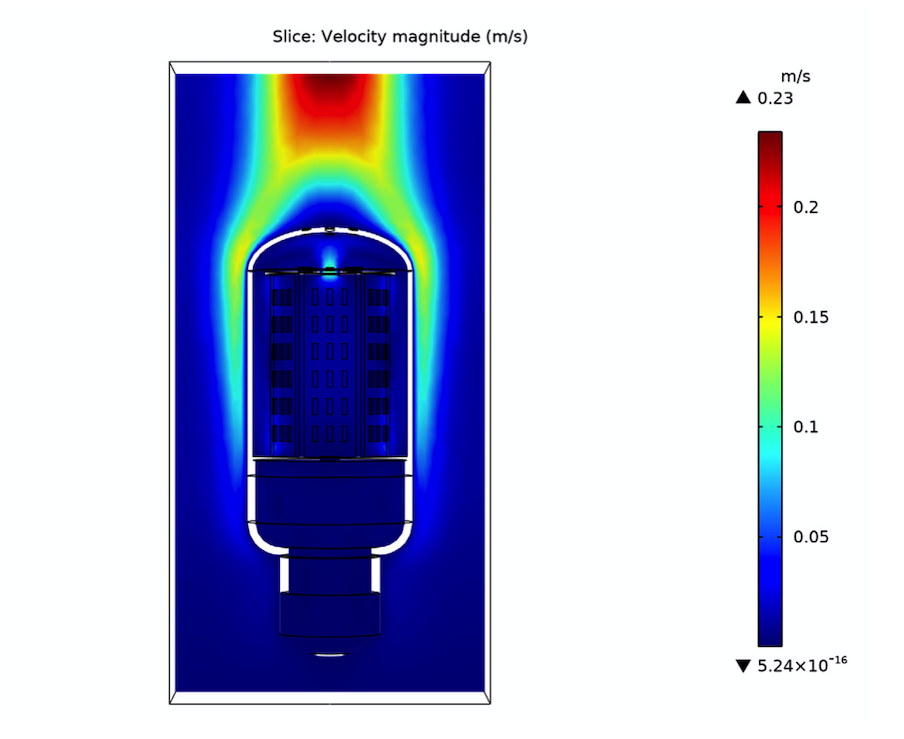 Temperature distribution in the LED chips in a bulb with a nominal power of 5 watts (left). The velocity field magnitude of the airflow inside and outside of the bulb (right).

Note: The computational time for this LED bulb model is 10% shorter in version 5.6 of COMSOL Multiphysics compared to version 5.5. Learn more here. 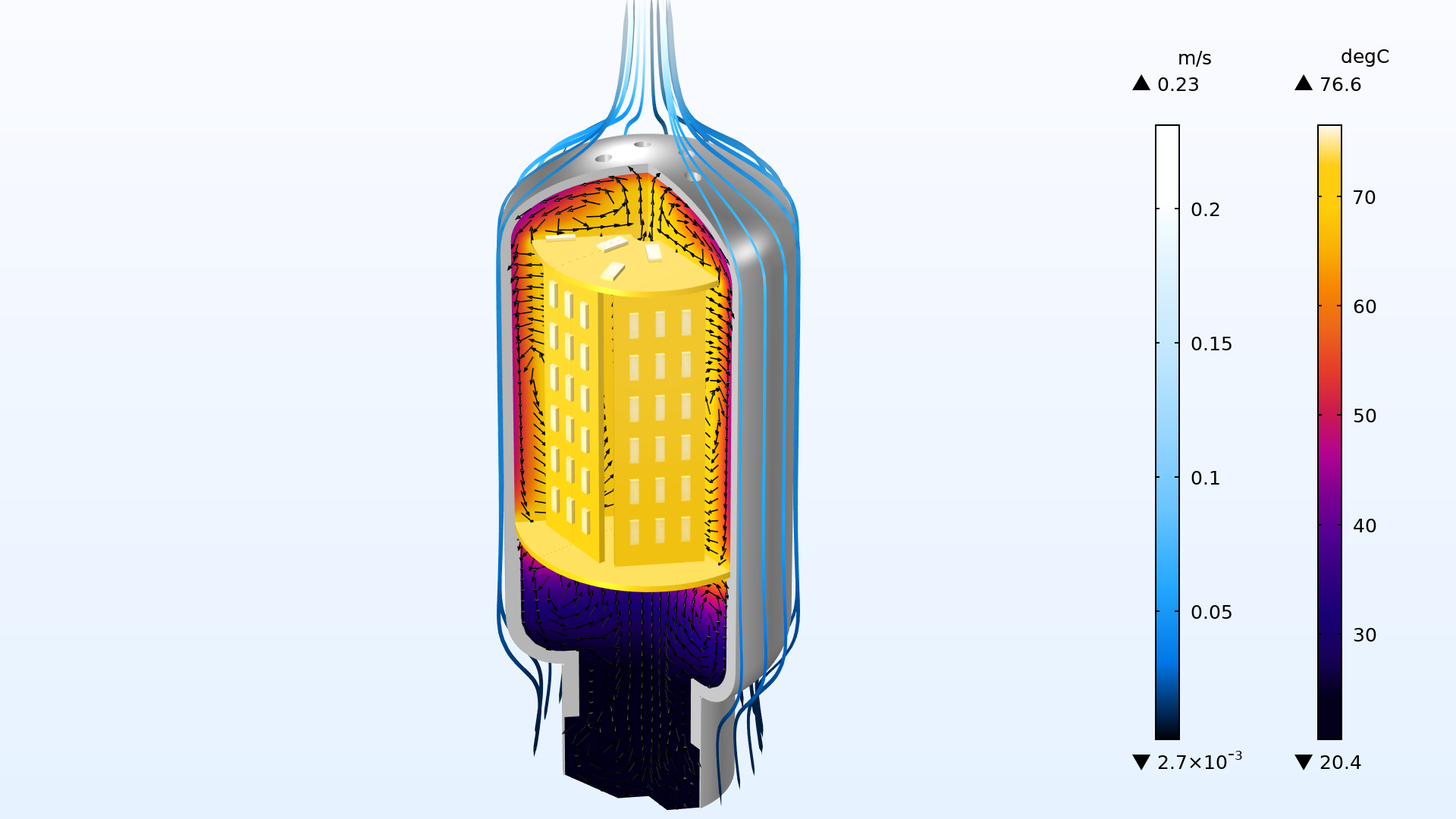 Simulation results for both the temperature distribution (surface plot) and velocity (arrows and streamlines) in the LED bulb model.

In the tutorial documentation, we do something we haven’t done before: compare the simulation results with a real-life experiment, conducted by us! 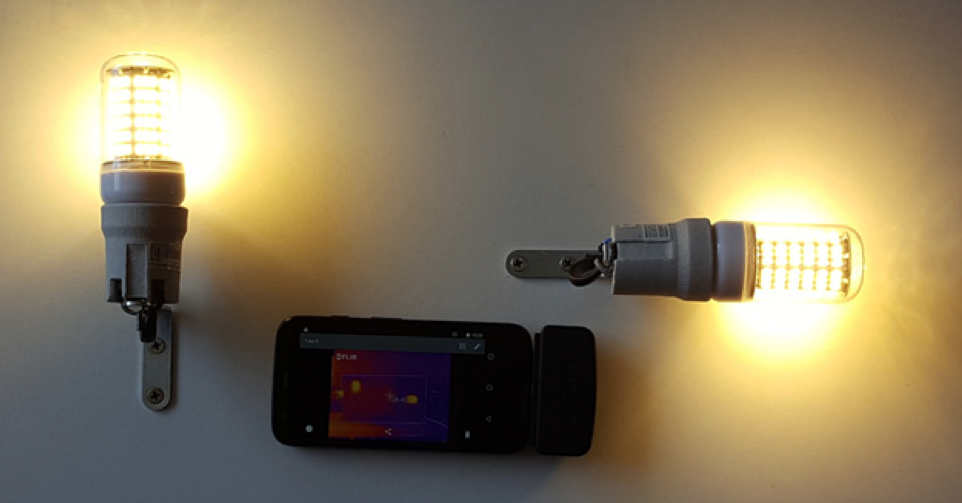 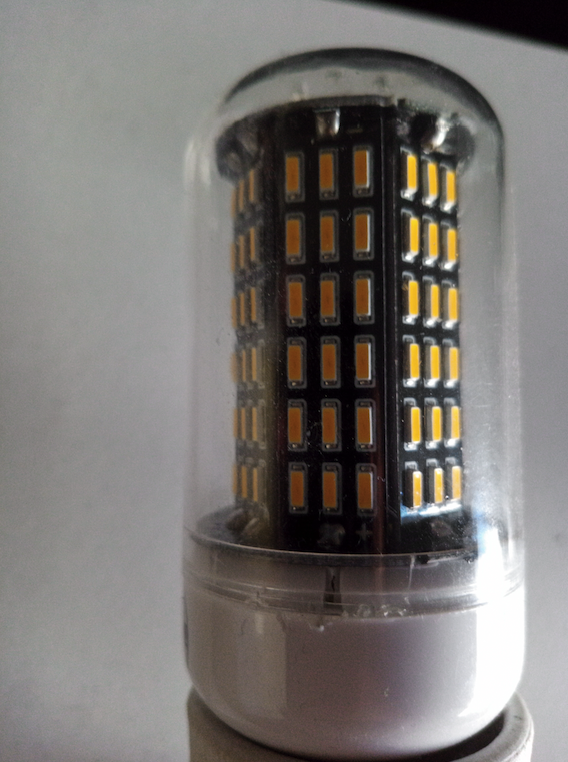 Like the model, both corn bulbs used in this experiment had a plastic shield covering, which helps protect their diodes from outside conditions, like dust.

Although a more detailed experiment would be needed to give a precise quantitative agreement between the model and reality, this experiment acts as a proof of concept. Specifically, it highlights that the cooling of an LED bulb is minimally influenced by its orientation, whether vertical or horizontal. These results are in good agreement with the results of the LED Bulb Cooling tutorial model.

Here, we discussed how you can analyze the thermal management of LED bulbs with heat transfer simulation. Try out the LED Bulb Cooling tutorial model by clicking the button below:

Read about other examples of LED modeling on the COMSOL Blog:

Good one. thanks for your helpful instruction.