Applications you Can Model with the Multiphysics Node in COMSOL 4.4

There are seven multiphysics couplings that you can define using the Multiphysics node in COMSOL version 4.4:

Each of the involved phenomena in the multiphysics model is described by its corresponding single-physics interface. However, breaking out the multiphysics interfaces into their respective single-physics combinations will not affect the ability to create these multiphysics models from scratch. If you know that you want to run a Joule heating simulation, you can still select Joule Heating in the Model Wizard. When adding Joule Heating to the model, three physics interface nodes will be created — Electric Currents, Heat Transfer in Solids, and the Multiphysics node. Additionally, three subnodes will be created under the Multiphysics node: Electromagnetic Heat Source, Boundary Electromagnetic Heat Source, and Temperature Coupling. More on that next. 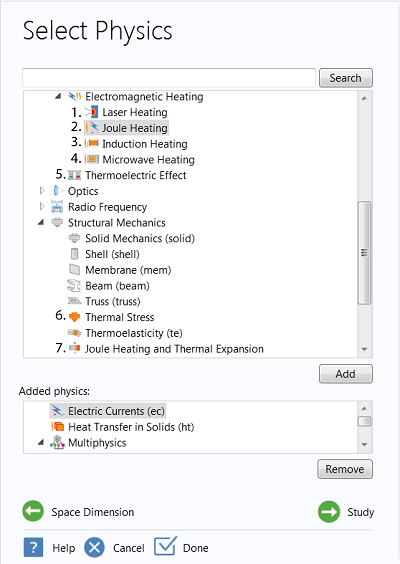 Joule Heating being added to the model displays its constituents as
separate physics interfaces in the “Added Physics” list. The subnodes
for the couplings will then appear in the model tree once you exit
the Model Wizard, see the figure below.

Instead of dedicated physics interfaces for modeling multiphysics, the Multiphysics node can have up to six subnodes for modeling the thermal stress and electromagnetic heating physics couplings. These are:

The subnodes give you the ability to add and subtract multiphysics couplings at will. This is a great benefit if you want to change the nature of your simulation midway through the model set-up. In previous versions, adding Joule Heating to a Thermal Stress interface required you to define the multiphysics couplings manually, in the source term for the heat transfer problem. This wasn’t actually all that difficult, but now, with COMSOL Multiphysics version 4.4, it is as simple as adding the Electric Currents interface and boundary conditions, and then selecting the necessary subnodes, which are defined automatically. Once you start working with this new method, you will notice that this indeed streamlines the workflow. 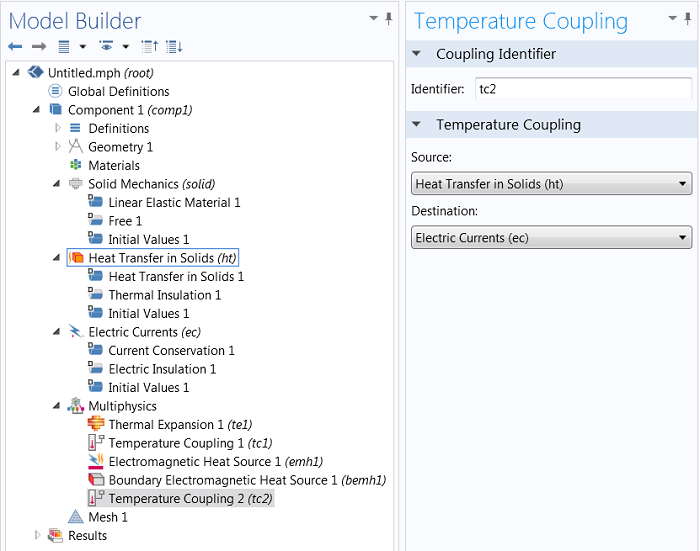 Five subnodes have been added to the Multiphysics node in the model tree to combine Joule Heating and Thermal Expansion.

Learn more about the Multiphysics node as well as other highlights from COMSOL 4.4 on the Release Highlights page.

I’m trying to do a simulation that with Magnetic Field and Solida Mechanics.
But I can not make the coupling between the two.

My Multiphsi node is disabled in Physics toolbar (version 5.1)

How do I enable Multiphtsics node?

I want the coupling between the two interfaces to be complete.

Can you help me, please?
Thanks,