We tend to do some research before taking to the lab, but when it comes to baking, I’ve been operating in the reverse. In this lighter blog entry, we explore the role of eggs in baking by comparing traditional recipes with vegan versions as well as more modern baking techniques. Chemistry experiments you can eat? Yes, please.

Science of Baking with Eggs and Fat

Many baked goods contain flour, eggs, fat, and sugar. You might also add in milk, salt, baking powder or soda, and some type of flavoring, but a large number of baking recipes call for at least those first four ingredients. According to this Guardian article, the classic English pound cake actually only needs the first four. In that case, the author writes that the egg and flour are structure-building, while the fat and sugar are structure-weakening.

Let’s look a bit more closely at the role of eggs and fat when baking.

The Role of Eggs

Eggs typically play one of three roles in baking:

If you’ve ever whisked eggs before, you know how foamy they get. The whisking traps air bubbles in the egg substance. When you then bake your cake in the oven, the batter dries — but the air bubbles in the egg foam remain expanded, thus making the cake rise, or leaven. Many recipes use baking powder and/or baking soda instead to make the baked good rise. Binding simply refers to how the eggs join other ingredients together when cooking because they coagulate. If the recipe does not include another primary liquid, the egg will provide the moistness. One ingredient that does it all.

The Role of Fat

Fat, such as butter or oil, is commonly used to add depth to the flavor of the final product as well as a softer crumb. The softer crumb comes from the fat’s ability to coat the flour starch and protein, thereby prohibiting the flour from mixing with the water-based liquids in the batter and developing tough gluten.

In vegan baking, butter is easily swapped for vegetable oil or margarine, so it’s not that interesting to study. One thing I’ve noticed, though, is that baking without eggs seems to affect the need for fat. We’ll get to that in a minute.

Leaving the Eggs out of It: Vegan Baking

My grandmother indoctrinated me into baking, starting at a very young age. She taught me what ingredients “go well together”, based on traditional recipes involving eggs and butter. Being the curious type, I would often test the limits of her guidelines when I found myself alone in the kitchen. (My parents can recount any number of odd mixtures forced upon them, some worse than others.) My grandmother’s guiding hand coupled with my own experiments ultimately cultivated an innate sense of how to bake.

It wasn’t until much later that I started thinking about the actual science behind the recipes. I have now been vegan for years, so these days, eggs and butter are nowhere near my baked goods. Vegan baking is all about the science. I’m back to playing around in the kitchen, wondering what I can substitute to get the same rising, binding, and moistening effect as eggs. It turns out there’s a very long list of good egg substitutes, depending on what you’re baking. 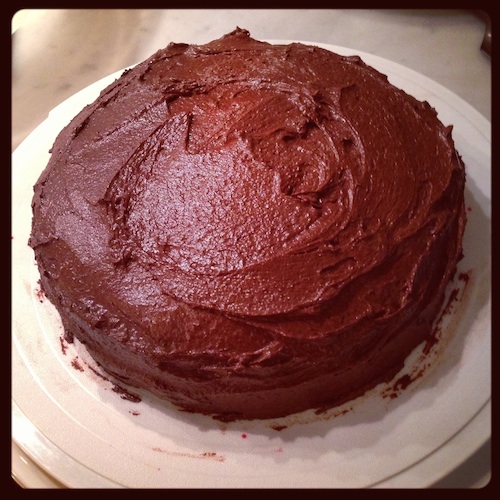 No eggs here: Vegan chocolate cake, made from scratch. Soy milk and apple cider vinegar eliminate the need for eggs.

A different “type of egg” depending on what you’re baking? That’s a rather interesting notion.

When I found a cinnamon swirl bread recipe on Pinterest (pictured below), I decided to use a mashed banana instead of the egg. Why? Because banana and cinnamon are two flavors that are often combined and experience suggested it would work.

Now, if we look at the recipe and apply our new knowledge of the three different roles of eggs in baking, we’ll see why it was a good choice. The original recipe calls for one cup of milk, so the egg is not the primary liquid. Given the teaspoon of baking soda, the egg is probably not there for leavening purposes either. Deductive reasoning then suggests the egg in this recipe serves as a binding agent. A quick search online reveals that mashed bananas can be used as a binding agent in baked goods. 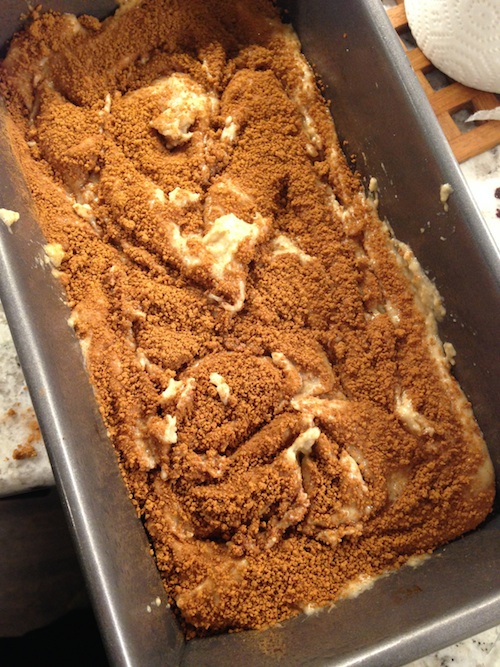 Cinnamon swirl bread in the making, adapted to be vegan by substituting the eggs for mashed bananas and the dairy milk for soy. Original recipe found on Pinterest. 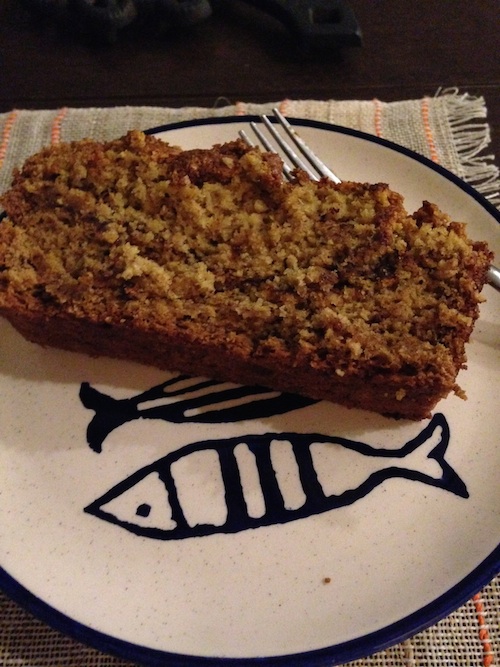 On the other hand, if thumbprint cookies are on the menu, it’s important that the dough contains air bubbles. In that case, I would not use bananas or apple sauce but a flaxseed meal and water mixture to replace the egg.

Fat is needed to limit the formation of tough gluten in the flour, but it turns out that fruit purees also act this way. Based on what we know about how to bake without eggs, it sounds like various egg substitutes might also sub for the fat. Back in the kitchen, I often find this to be the case. Why is that?

Take the common egg replacer, apple sauce, for example. The short answer to why apple sauce can replace the fat seems to be that it contains pectin. Pectin absorbs water rather than coating the starches and proteins like the fat would, leaving less water for the flour to react with. (Check out this thorough response on stackexchange.com.) 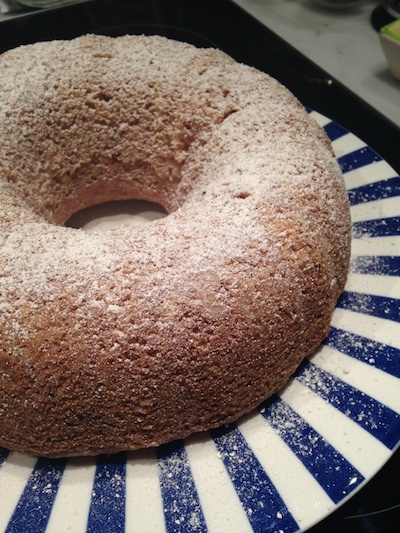 When I bake zucchini bread, muffins, or some other denser but moist breads, apple sauce or mashed bananas are excellent two-in-one egg and fat substitutes. When it comes to cake, apple sauce does work well but I usually only substitute some of the vegetable oil.

According to the cookbook The Joy of Vegan Baking, unsweetened apple sauce is great for binding and adding moisture. I suppose it would make sense, then, why recipes where the eggs play a binding and/or moistening role could also do with less fat if we sub the eggs for apple sauce.

From Shaking to Spraying, Let There Be Cake — the Modern Way

The food industry has long been reducing baking to a science. Pre-made cake mixes date back to the 1920s, but it wasn’t until much later that they were accepted by consumers. For some reason, other similar just-add-water schemes were well-received pretty much instantly and many had been around for quite some time when cake mixes tried to join the party. Custard (1840s), gelatin (1890s), and pancakes (also 1890s) were already made from a quick mix. So, why didn’t consumers accept cake mixes with open arms?

Regardless of the flavor — spice cake, chocolate, lemon — most cake mixes started with the same main ingredients: vegetable shortening, sugar, salt, baking powder or soda and phosphate, powdered skim milk, and powdered egg. Early consumer reports from the 1940s suggested that cakes made from these mixes didn’t always turn out the way they should. Quite a big deal, wouldn’t you say? Another reason seemed to be that more love went into baking a traditional cake from scratch. These new mixes simply felt cheap. That may sound silly, but as someone who has always preferred to bake a cake from scratch, I can certainly relate to that sentiment. When I want a quick treat for myself, it’s a nimble process. When I bake for a loved one, I take more care to make sure it’s perfect. 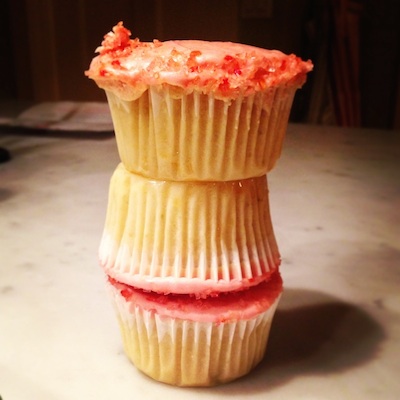 Not from a mix: A tower of cupcakes.

Anyhow, consumer analysts figured this out and General Mills decided to eliminate the powdered eggs from the mixture. When women were allowed to add in fresh eggs to the mix, and not just water, the whole mentality changed. Probably the flavor, too.

Today, many modern home bakers turn to boxes of premade cake mix. If you read the back of the box, you’ll note that the list of ingredients is much longer than the simple list above. Food scientists continue to tweak their recipes, for better or worse. (Can you even pronounce all of the ingredients anymore?)

Over the past few weeks, a couple of students from Harvard University have been popping up in the news. One student’s chemistry experiment led to instant cake of a new variety: cake you spray from a can. The other student, the more sales-oriented of the two, realized the business potential of the idea. Together, they are now promoting this innovation, aptly branded Spray Cake.

As if baking wasn’t already made simple enough by boxed mixes, here comes an option that doesn’t even require water. Take the whipped cream style can and spray the batter into a pan, then microwave it for 30 to 60 seconds, et voilá, you’ve got cake. What’s more, the batter does not contain baking powder or soda. How will the cake rise? Nitrous oxide added to a whipped cream dispenser will trap air bubbles in the cream and make it fluffy. In the same fashion, adding nitrous oxide to the Spray Cake can makes the batter rise. Whether or not Spray Cake contains eggs is unclear. The closest to a list of ingredients I could find was a statement from nydailynews.com that “[…] the batter is organic and contains similar ingredients to the box cake variety.”

As my grandmother’s successor, I don’t see myself spray-baking cake anytime soon, but I would imagine many other home bakers out there will. It’s certainly a cool innovation and it will be interesting to follow the Spray Cake journey into the consumer market. Catch the latest news on the Harvard innovation lab website.