The Evolution of Night Vision Technology

From the addition of components to the use of new materials, night vision technology has grown tremendously since its initial debut in the 1930s. While the longevity and reliability of night vision devices have steadily improved, new research on graphene-based sensors for infrared detection may provide one of the most profound developments to date.

When the first military night vision devices were introduced in World War II, the technology, while valuable, was held back by its bulkiness. These devices also required the use of a large infrared searchlight for illumination, which unfortunately made this technology easier for enemy forces using similar devices to detect. The intent — to provide protection for troops and allow them to move at night — was strong, but the initial devices were lacking necessary subtlety and portability.

Flash forward to today, and you’ll find new night vision research underway — research that could potentially lead to the development of infrared vision contact lenses. Before we jump ahead to this most recent advancement, let’s reflect on how this technology has gradually progressed over the years.

How Night Vision Technology Has Developed

As mentioned above, the initial night vision devices required active infrared, relying on an infrared searchlight for illumination. This searchlight projected a beam of near-infrared light, which reflected off objects and then bounced back to the device’s lens.

The photons from the light energy then passed through a photocathode, which converted them into electrical energy. In conjunction with the cathode, an anode was used to accelerate these electrons. The acceleration process increased the energy of the electrons as they hit the phosphor screen, helping to produce a visible image. This technique, however, often resulted in distorted images and a shorter life span for the tube.

In the 1960s, a transition occurred from the use of active infrared to passive infrared devices. Rather than relying on infrared light, these new devices, which were widely used in the Vietnam War, depended on ambient light from the Moon and stars to properly function. While the light source had changed, the technology used in the image-intensifier tube remained the same. Thus, the same issues of image distortion and limited tube life affected the technology.

Improvements in image resolution finally came along with the addition of the micro-channel plate to the image-intensifier tube. Comprised of millions of microscopic holes, this conductive glass plate helped to multiply, rather than accelerate, the number of electrons passing through its electric field.

As in previous technology, photons were converted to electrons as they passed through the photocathode. Once the initial electrons hit the micro-channel plate, secondary electrons were produced and additional electrons continued to form as they interacted with the walls of the plate, further amplifying the electrical signal. The addition of the micro-channel plate not only created brighter and clearer images, but it also increased visibility in conditions with extremely low levels of light.

And then came a shift in focus from the components themselves to the materials from which they were developed. Noted for its ability to efficiently convert photons to electrons, gallium arsenide was the material that was subsequently used to create the photocathode. This design technique established better resolution capabilities and a stronger sensitivity in devices. Meanwhile, an ion barrier was used to coat the micro-channel plate, enhancing the longevity of the tube’s life. 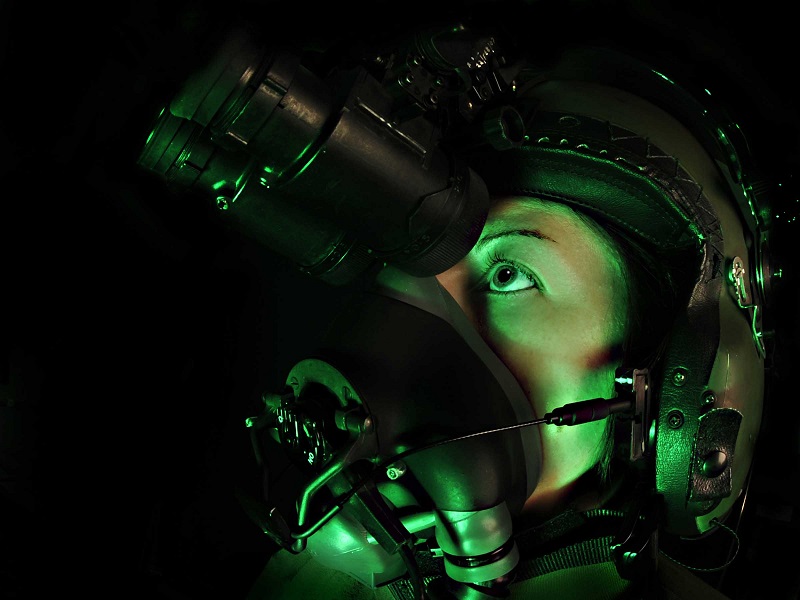 You may have heard it referred to as a “miracle material”. Since its discovery in 2004, graphene has been valued for its tremendous strength — especially in comparison to its low weight — as well as its efficiency in conducting heat and electricity.

But another unique property to note about this material is its ability to sense the whole infrared spectrum, as well as visible and ultraviolet light. The thin material, however, only absorbs a fraction of the light that hits it. Thus, graphene is unable to create an electric signal that is strong enough for its use as an infrared sensor. But, what if there was a way to amplify this signal?

Researchers at the University of Michigan have worked to create such a device that could intensify graphene’s optical capabilities.

This device is composed of an insulating layer sandwiched between two layers of graphene, with an electric current running through the bottom layer. As light hits the top layer, it frees electrons that then migrate to the bottom layer. This electron movement leaves behind positively-charged holes in the upper layer of the device, which consequently affect the flow of electricity to the bottom layer, amplifying the electrical signal.

One important feature to note about this graphene-based device is that it operates while the material is at room temperature. This could potentially mean eliminating the use of bulky cooling equipment, which is required for night vision devices to operate. The size of the device is also noteworthy. These sensors, while powerful in nature, are similar to the size of a fingernail, and researchers believe they can be scaled down even further in the future — even small enough to integrate with a contact lens.