Over the past few decades, the field of education has transformed significantly. We’ve progressed from the classic blackboard and chalk to Microsoft® PowerPoint® presentations and video learning tools. We’re now in the midst of yet another advancement of the university classroom: experimentation via virtual laboratories.

Virtual laboratories are exactly what the name implies: Laboratories that can be accessed and used through a screen. They function as a simulator of real-world processes and environments, making complex scientific phenomena accessible at your fingertips.

Simulation now provides just as much, if not greater, flexibility than physical experiments. An accessible and time-efficient experimentation process means that active learning can now be a part of students’ regular study routines.

The Reaction Equilibrium – Gas Phase Conversion of Ethylene to Ethanol demo app in action. The app is designed to be used as a teaching tool, and it is an example of the kind of app you can build in the Application Builder in the COMSOL Multiphysics® software.

Although accessibility is a visible advantage, virtual laboratories have also come to occupy a larger role in enhancing the classroom learning experience of students in STEM disciplines. Abstract concepts defined by complex mathematical formulas can now be visualized, enabling students to gain a better understanding of these concepts at a fundamental level. By drawing attention away from complex mathematics, students can now focus on the actual physical phenomena itself while solving problems relatively easily.

The COMSOL Multiphysics® software offers a robust platform to simulate various physical phenomena, engineering processes, designs, and devices in the context of a virtual laboratory. You can also convert COMSOL Multiphysics models into easy-to-use simulation apps that students can access with COMSOL Server™ or as standalone apps compiled with COMSOL Compiler™.

Incorporating Simulation into the Curriculum

Universities across the globe today realize the importance of inquiry-based learning (IBL), a hands-on approach that encourages students to develop and answer their own research questions.

Dr. Ivana Milanovic, professor of mechanical engineering at the University of Hartford, shared an interesting observation while presenting her methods of including simulations in her fluid and heat transfer courses. She pointed out that students “are hands-on folks and they want to do something exciting.” She adds: “They don’t understand at that stage that what is exciting is actually math!”

Milanovic piques her junior-year students’ interest by integrating multiphysics simulation and applications into fluid mechanics and heat transfer courses as a required part of the coursework. In her classroom, simulation apps serve as visuals to excite and engage students while students work on app building for their graded homework. 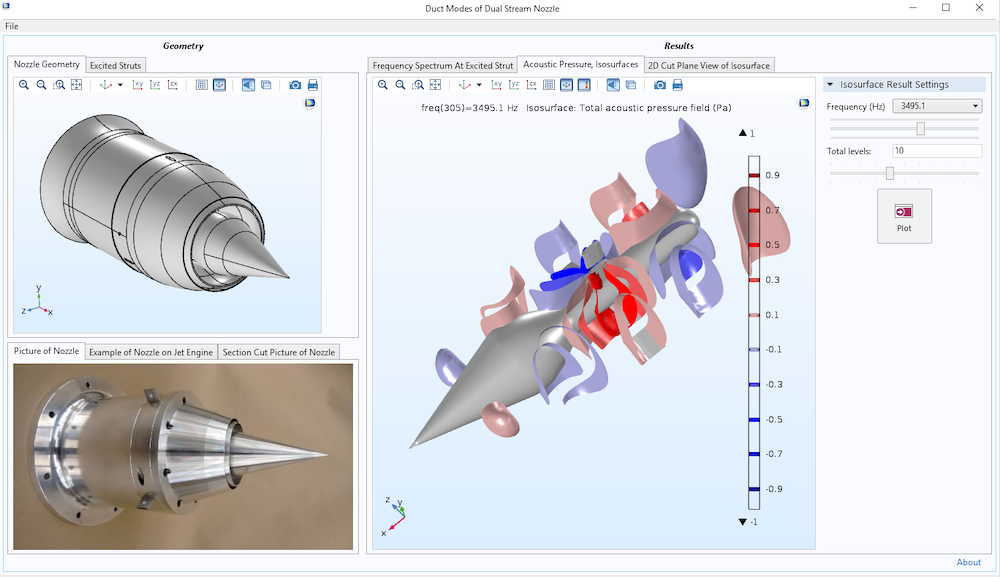 A simulation app used for inquiry-based learning at the University of Hartford.

Prior to the inclusion of multiphysics simulations in the fluid and heat transfer curriculum, Milanovic set up a student-run turbomachinery lab to promote inquiry-based learning among mechanical engineering students. However, these activities were extracurricular and were generally limited to students with an established motivation and interest in STEM fields.

The present course grading scheme includes a section of inquiry-based learning in which students solve a problem using COMSOL Multiphysics without the help of instructions. As the course progresses, the problems advance into more demanding problems based on the actual physics of heat transfer or fluid flow. Milanovic’s attempts have resulted in students working on simulations and developing apps funded by the NASA Connecticut Space Grant. Two of Milanovic’s students went on to intern at NASA and get into the NASA Pathways program. One student even received a glowing recommendation from their supervisor, who said they could not have asked for a better student to help with the research, and another student received over $20,500 in funding over two years for their simulation-based research.

Without visuals, students are forced to try to visualize concepts through complex math and physics, which many are learning and combining for the first time. As a result, they tend to get stuck in the complex mathematics without getting a clear picture of the actual problem to be solved.

To work around this visualization problem, Kinsey completely redesigned the electrical engineering curriculum in 2017, incorporating two-week cycles of simulation labs and hands-on experiments. During the first week of the cycle, students explore key topics from lectures through numerical simulation, and in the second week of the cycle, they perform actual experiments, which are designed to demonstrate that these concepts are real physical effects.

Kinsey and his TAs build simulation apps showing electromagnetics concepts and problems using the Application Builder in COMSOL Multiphysics. Students can play around with the EM fields, changing parameters of fields with which they are working. When students have a strong intuitive grasp of the nature of these fields, Kinsey said: “The math makes sense. It isn’t abstract. In fact, it can be the simplest, most compact way to describe what is happening.” 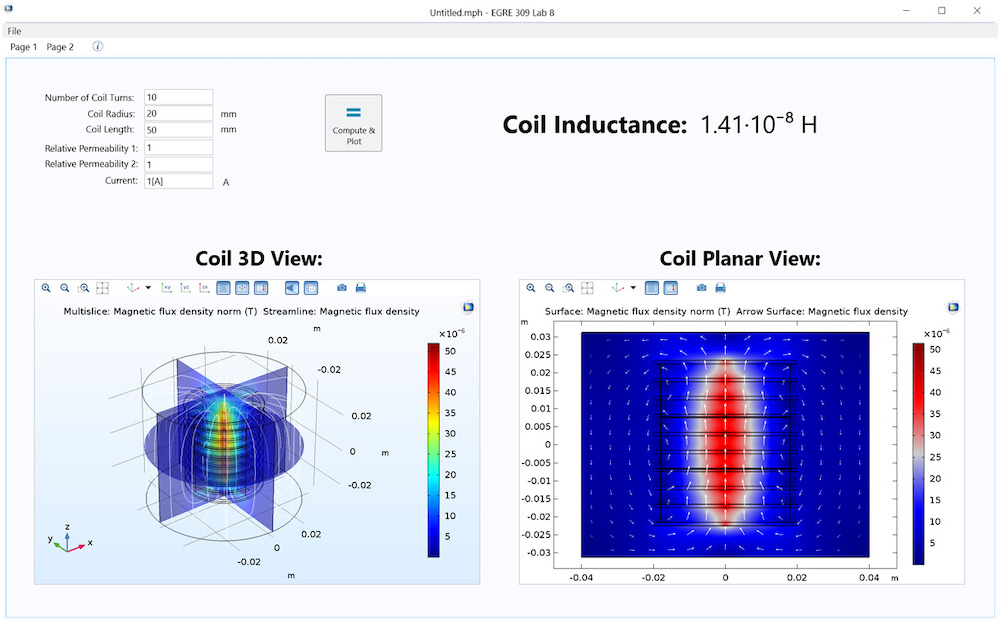 A simulation app built for electrical engineering students at VCU.

At the University of Dayton, Prof. Erick S. Vasquez surveyed students of chemical engineering taking his transport phenomena course to understand if students with no prior modeling experience learn better using simulations in the classroom. The survey attempted to gauge the effects of using simulation in the classroom on the students’ depth of learning. It also surveyed the students’ experiences using COMSOL Multiphysics to relate mathematical models with actual experiments, connect the theory with real applications, and understand and manipulate results with ease. A majority of the students had positive responses to the overall survey.

In addition to the enhancements in learning enabled by supplementing regular laboratory sessions with virtual experiments, there is also a nobler cause that virtual labs serve. In India, online simulation tools have changed the face of education in a large number of institutes that are not equipped with the necessary resources for learning, including laboratories or apparatus.

In 2012, the Government of India launched a collection of 91 virtual laboratories containing hundreds of experiments in 9 disciplines of science and engineering. The Indian Government has partnered with top institutes in the country to develop these simulation-based virtual labs, which can be accessed remotely by anybody with an internet connection.

The simulation-based virtual labs involve experiments modeled using mathematical equations, which are carried out remotely on a high-end server. The results are communicated to the students over the internet. These labs are built to operate at scale and cater to a large number of simultaneous users.

This project aims to ensure that limited resources or the lack of sophisticated instruments do not hamper students’ education experiences. In addition to undergraduate and graduate students of engineering and science, virtual labs are also meant to hopefully trigger the inquisitiveness of high school students and motivate them to pursue higher education and research.

The COMSOL® software enables professors to easily implement virtual laboratories into their curricula. Models built in COMSOL Multiphysics can be easily converted to simulation apps using the Application Builder. The apps are distributed to students via COMSOL Server™, or as standalone apps compiled with COMSOL Compiler™. Students can then conduct virtual experiments anytime and anywhere, taking advantage of a specialized user interface built on a powerful mathematical modeling tool.

Interested in bringing simulation to your classroom? Contact us to learn more about using COMSOL for teaching:

Microsoft and PowerPoint are trademarks or registered trademarks of Microsoft Corporation in the United States and/or other countries.