Sofia Vasilyevna Kovalevskaya (aka Sofya or Sonia) is remembered as the first prominent female Russian mathematician. Her life’s work includes important contributions to analysis, differential equations, and mechanics. In addition to being the first woman to obtain a doctorate in mathematics, she is also the first to take up a full, active mathematics professorship in Europe, among other accolades.

Born on January 15, 1850, Sofia Kovalevskaya showed an early aptitude for math. However, as a woman, she could not attend university in Russia, and to seek further education abroad, she needed permission from her father or husband. Kovalevskaya married Vladimir Kovalevsky, a paleontologist, and the pair emigrated in 1867 so that Sofia could begin her education in mathematics. 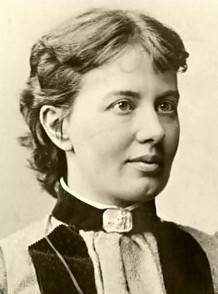 Portrait of Sofia Kovalevskaya. Image in the public domain, via Wikimedia Commons.

Starting in 1869, Kovalevskaya attended the University of Heidelberg in Germany, auditing classes at the approval of professors. The following year, Kovalevskaya was not allowed admission to a university in Berlin based on her gender, so she studied math privately with mathematician Karl Weierstrass as her tutor.

In 1874, Sofia presented three papers to the University of Göttingen as her doctoral dissertation. The three topics were:

In 1883, Magnus Gösta Mittag-Leffler offered Kovalevskaya a position as a lecturer in mathematics at Stockholm University, and she was later promoted to a full professor in 1889. She was the first woman to hold either position.

In addition to her dissertation materials and professorship, Sofia Kovalevskaya also joined the editorial board of the mathematical journal Acta Mathematica, which was founded by Mittag-Leffler, her Stockholm University colleague. Later on, in 1888, Kovalevskaya became the first woman elected as a corresponding member of the Russian Academy of Sciences.

That same year, she was awarded the Prix Bordin from the French Academy of Sciences for her paper on the rotation of a solid body around a fixed point. In mathematics, this is described via the Kovalevskaya top, a mathematical object in which two of the three principal moments of inertia at the fixed point are equal in size, and double the third point.

Kovalevskaya is also known for the Cauchy–Kovalevskaya theorem, which states that the Cauchy problem has a unique analytical solution if the system of partial differential equations contains coefficients that are analytic functions.

Mathematical theorems are not the only namesakes of Sofia Kovalevskaya. In Stockholm, where Kovalevskaya became the first female professor, as well as in St. Petersburg in Russia, there are streets named after Kovalevskaya.

In addition to her reputation in mathematics, Kovalevskaya was also invested in literature, and was known as a talented writer. She composed a number of plays, novels, and essays, as well as two autobiographical works: A Russian Childhood (which became a bestseller in Sweden under the title The Rajevskj Sisters) and Nihilist Girl.

“It seems to me that the poet must see what others do not see, must see more deeply than other people. And the mathematician must do the same.”
– Kovalevskaya, 1978, p. 35

Kovalevskaya is also remembered as a persistent advocate of women’s rights and political causes, creating paths for women and new ways of thinking in the field of modern math.