At the COMSOL Conference 2015 Grenoble, attendees had the opportunity to learn about a variety of innovative research involving COMSOL Multiphysics. During the industry talks, keynote speakers from four companies — ArcelorMittal Global R&D, ABB, B&C Speakers, and CHLOE — took the stage to share their stories. Take a closer look at this interesting mix of multiphysics applications.

Sadok Gaied of ArcelorMittal Global R&D was the first keynote speaker at the COMSOL Conference 2015 Grenoble. He reflected on the role of simulation in analyzing the welding process behind laser welded blanks (LWBs).

In the automotive industry, weight reduction is an important concern, one that is driven by reduced emission requirements. Laser welded blanks (LWBs) are an efficient solution, offering high mass savings — sometimes more than 20% — while ensuring good mechanical performance. During crash tests, as Gaied pointed out, LWBs are exposed to severe conditions. To avoid weld geometry defects, optimization of the welding parameters is required. 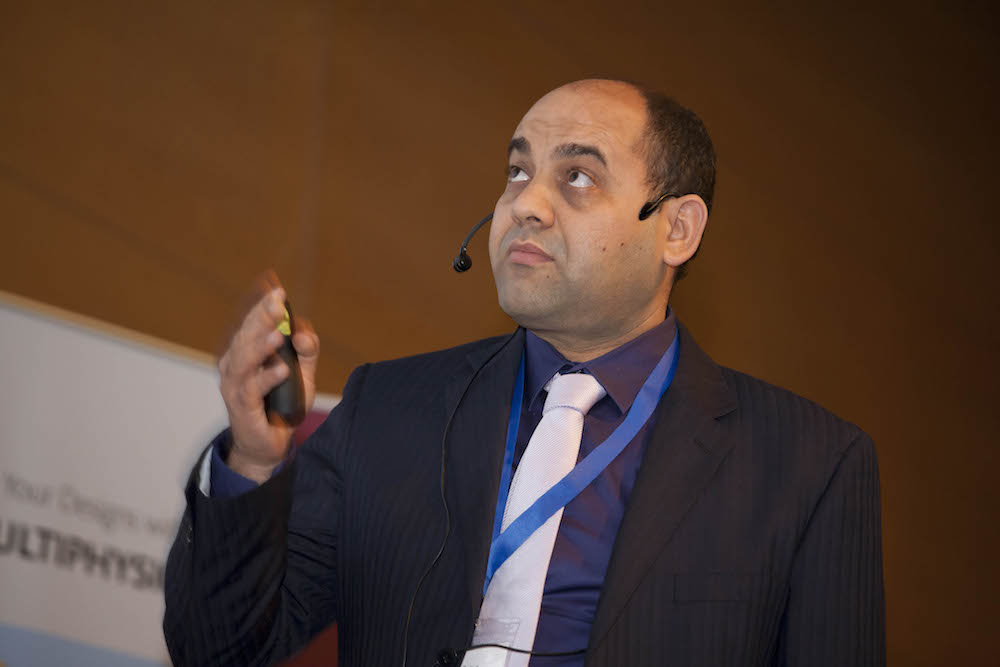 Looking to avoid weld geometry defects, a team at ArcelorMittal designed a numerical model to gain a better understanding of the physical phenomena behind keyhole laser welding. Additionally, they studied the fluid flow around the keyhole and its impact on the weld stability as well as the weld seam geometry and its defects. This represented a true multiphysics problem, combining optic wave phenomena, electromagnetism, heat transfer, and fluid mechanics.

COMSOL Multiphysics provided researchers with the tools to account for a variety of phenomena, including keyhole generation, fluid flow in the melt pool, porosity behavior, and the inclination and oscillations of the front surface of the keyhole. In parallel with the simulation analyses, experimental studies were conducted to analyze physical phenomena as well as to validate the models. When comparing the simulations with experimental measurements, the team found good agreement between the temperatures in the welds and the high-speed visualization analysis of the processes.

Dr.-Ing Octavian Craciun of ABB Corporate Research Germany was the next speaker of the day. The topic of his presentation was using COMSOL Multiphysics to advance the design of mechatronic devices, specifically circuit breakers and reclosers. 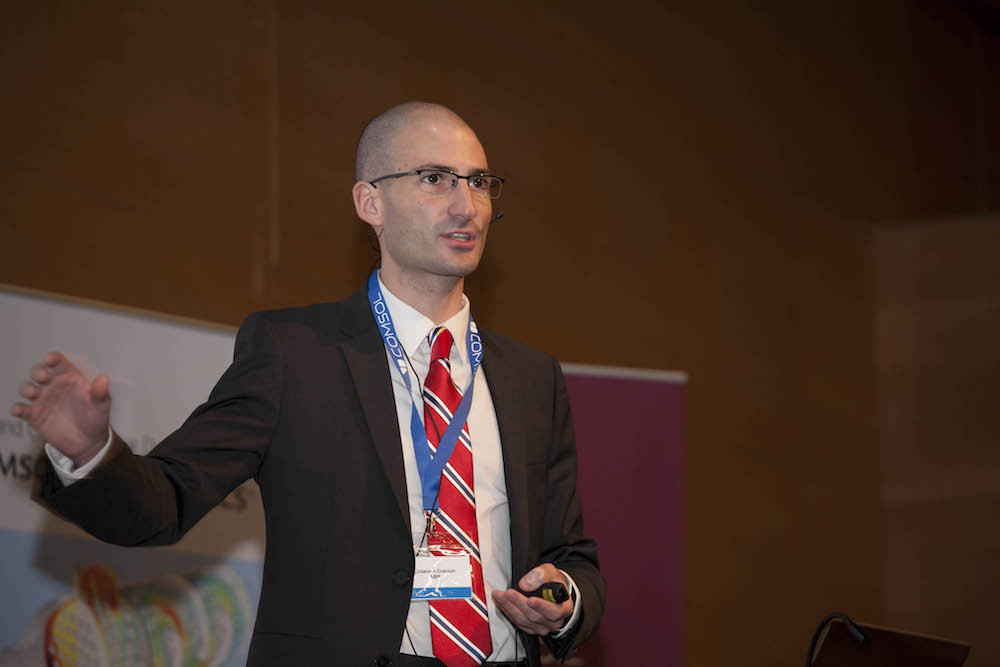 Grid systems help improve the availability and security of power supply. Grid protection devices, such as circuit breakers and reclosers, are important elements in these systems, enabling connections to alternate grid sources and improving the reliability of the network/grid. As required switching capabilities increase, so does the need to optimize the design of such devices. That’s where simulation comes into the mix.

The first case Craciun presented focused on ABB’s innovative hybrid HVDC breaker design. Simulation was used to study and optimize the electromagnetic actuators within the configuration, ensuring the reliability of its breaking capabilities along with its efficiency and speed. The results from the studies helped the team craft the optimal design, which featured breaking times of less than 2 ms, a current breaking capability of 16 kA, and protective current limitation.

As Octavian notes, HVDC breakers must be both fast and powerful. COMSOL Multiphysics was used to optimize this process. #COMSOLconf15

The ABB 3-phase GridShield® recloser, a medium-voltage protection device, was the next point of focus. In the recloser, powered electromagnetic actuators enabled safe opening and closing cycles across a range of temperatures. With COMSOL Multiphysics, the researchers were able to quickly identify the ideal parameters for the actuators and predict the performance of the device.

To end, Craciun discussed a multiobjective approach to optimizing electromagnetic actuators. As he noted, coupling COMSOL Multiphysics with other simulation-based tools enabled the realization of complex and transient multiphysics models for, in ABB’s case, electromechanical products.

Next up was Roberto Magalotti of B&C Speakers. The focus of his keynote speech was applying a multiphysics approach to the design of loudspeaker drivers.

Analyzing the Principles Behind a Loudspeaker Driver

In his presentation, Magalotti highlighted a series of studies conducted in COMSOL Multiphysics that addressed various elements of a loudspeaker driver. Electromagnetics analyses facilitated the design of the magnet assembly and voice coil, while measuring the impact of eddy currents. With regards to the compression driver loudspeaker, researchers at B&C Speakers ran a number of mechanical-based simulations. These studies included analyzing the compression driver’s moving assembly and its interaction with the loudspeaker horn, as well as evaluating the heat paths throughout the loudspeaker device. 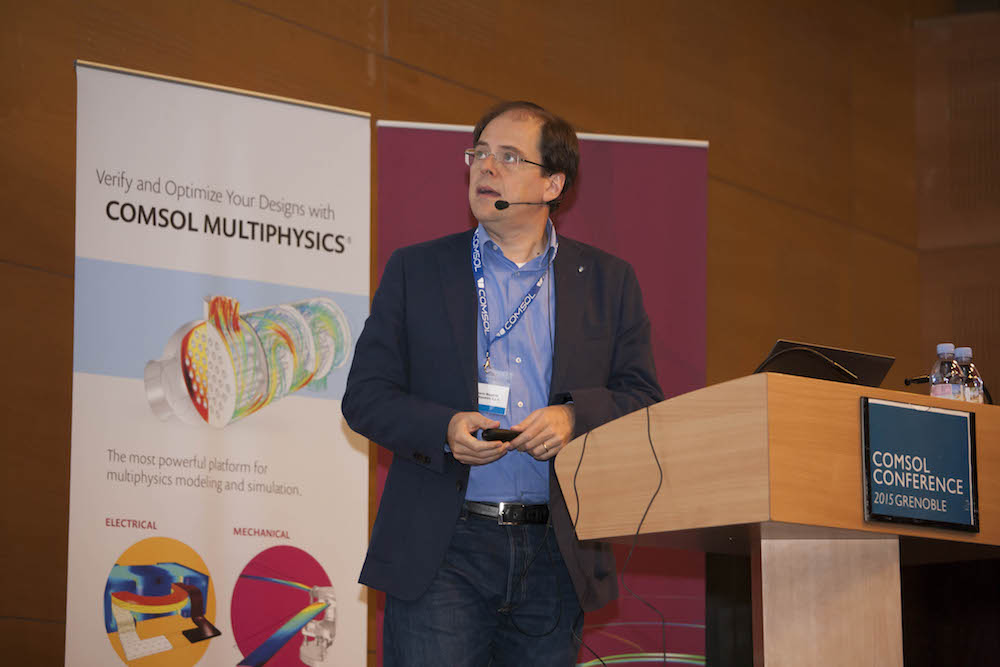 Along with the software’s ability to address multiple physics, Magalotti mentioned another advantage: “One of the interesting features in COMSOL is that we can animate and get a good idea of what happens at each frequency.” He also spoke highly of the support provided by the COMSOL support staff, as they were helpful in addressing various challenges throughout the modeling process.

Roberto referencing COMSOL Multiphysics: The number of tools that have been at our disposal is constantly increasing. #COMSOLconf15

The final speaker of the day was Sébastien Cambon of the Open and Experimental Centre for Heavy Oil (CHLOE). He spoke about the importance of simulation in advancing heavy oil recovery mechanisms.

Extra heavy oil is becoming more important as a replacement for conventional oil. While the potential is great, recovering this type of unconventional oil can be challenging, as the reserves are often so viscous that they are nonmobile. In the case of deep nonmobile reserves, only thermal recovery technology can be used — a process that is often complex and expensive.

Looking for a more energy efficient route, a team at CHLOE studied an electromagnetic heating technology for heavy oil recovery. Their approach featured many advantages, from a reduced environmental impact to avoidance of the injectivity problem. However, to improve the technology’s energy efficiency and recovery abilities, further research was needed. For this, the team turned to simulation.

Sébastien Cambon of CHLOE: “It is important that we ensure the efficiency of the heating.” #COMSOLconf15

The simulation studies involved an array of physics, from multiphase flow in porous media and phase transition to heat transfer and electromagnetic fields. COMSOL Multiphysics helped take into account different physics, while providing accurate numerical models and an easy-to-use interface. As Cambon pointed out, coupling the COMSOL software with a reservoir simulator enabled the researchers to account for electromagnetic heating. The result was a powerful simulator tool for petroleum-based industries.

Thank You to Our Keynote Speakers

Thank you to all of the keynote speakers from the COMSOL Conference 2015 Grenoble. It is always exciting to hear about our users’ projects and how simulation is advancing their research efforts. We look forward to hearing about more innovative applications in 2016!