Keys, phone, wallet — prior to March 2020, these items were considered the three essentials you need before walking out the door. In an effort to control the spread of COVID-19, there’s now a fourth essential: face mask. In fact, Dr. Robert Redfield, director of the Centers for Disease Control and Prevention (CDC) in the U.S., called face coverings “one of the most powerful weapons we have to slow and stop the spread of the virus,” (Ref. 1). In principle, masks are used to mitigate the spread of pathogen-laden particles, such as respiratory droplets. Using CFD simulation, researchers at Veryst Engineering, a COMSOL Certified Consultant, analyzed the motion of particles between two runners to further understand their complex behavior. 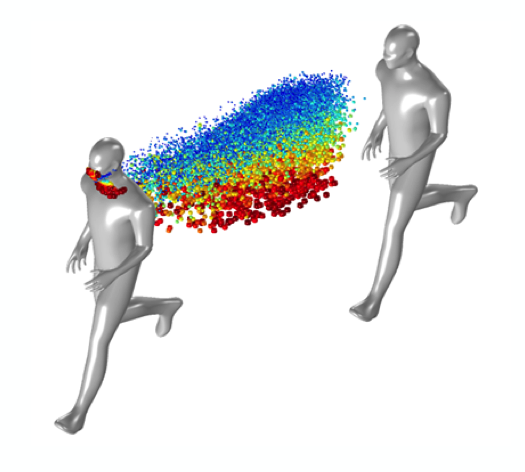 Different modes of virus transmission, including airborne transmission and droplet transmission, are carefully being studied by researchers and scientists around the world. If you search either term, millions of news articles and scientific reports appear. What do these terms actually mean?

First, it’s important to acknowledge that there is a lot of scientific debate over how droplets should be classified. Most of this discussion focuses on the sizing of these particles. So, what are the characteristics of small droplets and large droplets?

Larger droplets typically fall faster than smaller droplets due to their greater volume, and they often land within a few meters of where they were initially released. However, if large droplets are launched into the air at high speeds, as in a cough or sneeze, they can fly much longer distances before they hit the ground. During certain weather conditions, large droplets can evaporate quickly and transform into small particles that will behave like small droplets or droplet nuclei. (Ref. 3)

On the other hand, smaller droplets and droplet nuclei move at similar speeds as the air around them. On average, they fall very slowly and can get lifted up by the tiniest of air currents. They tend to disperse or spread out over time, and some of them can remain in the air for hours!

Droplets are typically measured in microns (μm): 1 μm is equivalent to a millionth of a meter. In Veryst’s work, they solely analyzed the motion of droplets larger than ~20 µm and smaller than ~200 µm in diameter. For reference, a fruit fly’s eye is ~70 μm across. 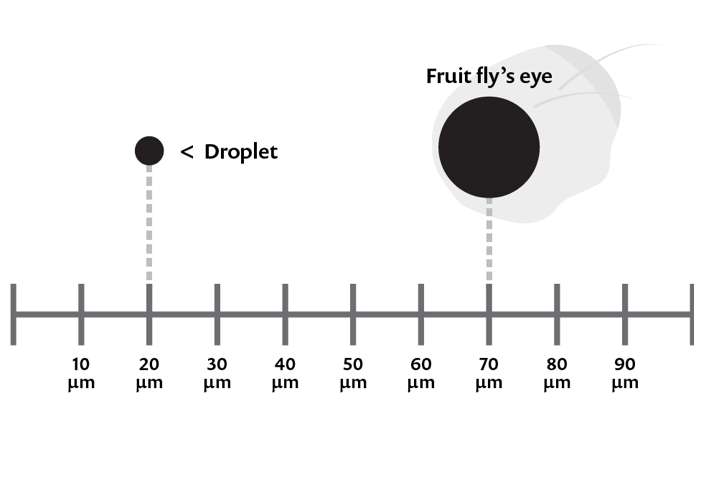 An illustration of a sizing graph comparing the size of the droplets measured by Veryst to the eye of a fruit fly at 70 µm.

It’s important to note that when such particles fall they can contaminate surfaces, which is why hand sanitizer dispensers and self-cleaning surface technologies have been installed in commercial and noncommercial businesses and homes worldwide.

Breathing, coughing, and talking are all examples of how droplets are emitted into the air. Studies have shown that certain acts, like coughing, sneezing, and talking loudly can lead to more particle emission when compared to other behaviors. Although a complete understanding of how the COVID-19 virus works is still unavailable, the CDC recognizes droplets as potential coronavirus spreaders (Ref. 4).

With the intention of learning more about particle flow, Nagi Elabbasi of Veryst Engineering and his team modeled the movement of droplets between two people jogging in tandem in an open space using the COMSOL Multiphysics® software. Physical phenomena — such as flow and moisture in the air, air temperature, forces on the particles, and particle evaporation — are all important to account for in this modeling scenario.

Analyzing Particle Flow: It’s a Marathon, Not a Sprint

In 2020 alone, several of the world’s largest marathons were canceled due to the COVID-19 pandemic; including the Boston Marathon, making it the first year this historic race has ever been called off. Not only do these races supply jobs to thousands of people but they also bring in hundreds of millions of dollars to their host cities (Ref. 5). In this time of uncertainty, there is no knowing when these marathons will resume. 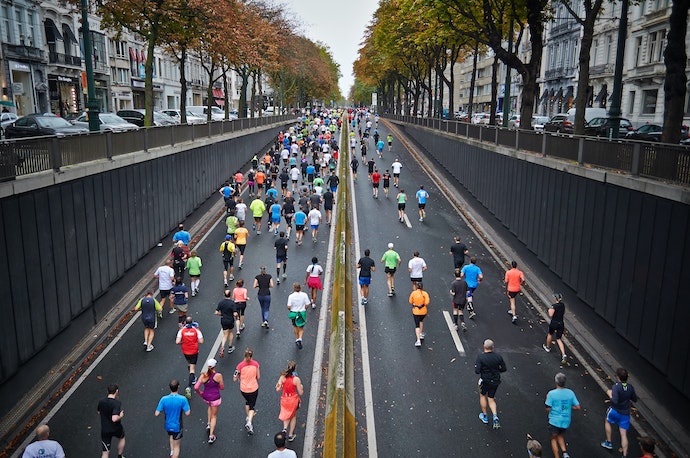 As races across the world continue to get postponed and canceled every day, a lot of people have taken up the hobby of running on their own. In fact, many neighborhoods have seen a spike in the number of joggers on the road. With gyms either closed or open at limited capacity, people are turning to outdoor activities like jogging to stay active. Running also provides a quick way to get fresh air and a good reason to get out of the house.

In the midst of a pandemic, people want to know if running outside is a potential way to spread COVID-19 and whether or not they should be wearing a mask when running with a small group. With the purpose of learning more about how particles flow between runners, Elabbasi and his team simulated two joggers running outside at 6 ft (2 m) apart…

The runners in Veryst’s model are moving at ~4 mph, an average jogging speed. The back runner is in the slipstream of the front runner, shown below. The front runner is assumed to be breathing moderately deeply, and their exhaled particles are initially moving at a constant speed of ~5.6 mph (or 2.5 m/s) relative to the runner. Head-, tail-, and crosswinds are assumed to be zero in the model. 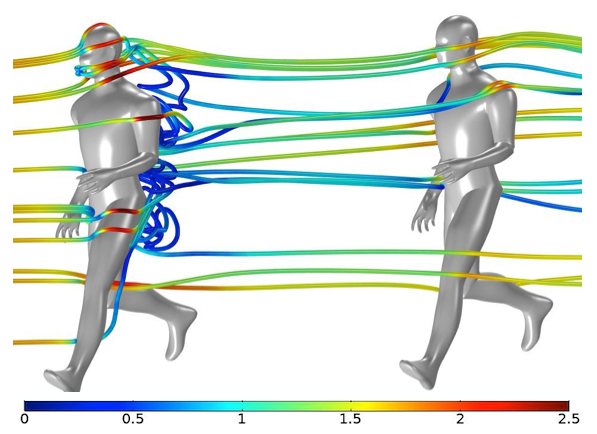 Flow streamlines of the air around the runners. Note: The color scale represents the air velocity relative to the runners in meters per second.

As previously mentioned, only droplets, or particles larger than ~20 µm in diameter, were analyzed in order to save on computational time. In addition, any particle over 200 µm in diameter was omitted, because such particles would likely fall to the ground before reaching the second runner. 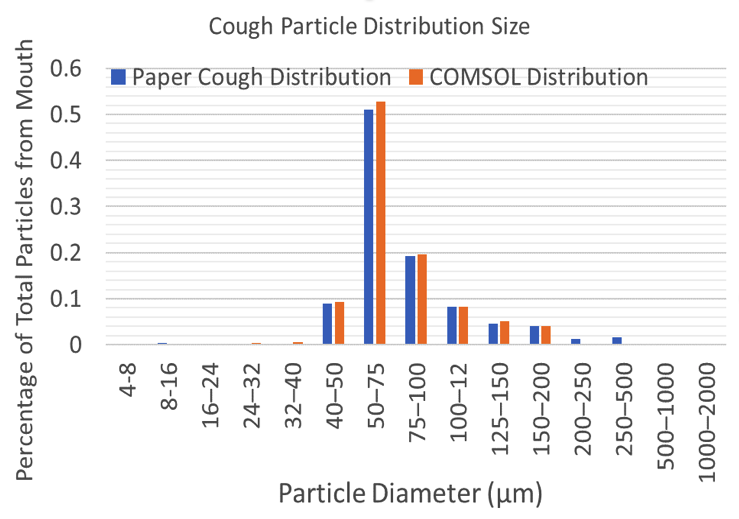 Versyt modeled particle size distribution based on the 2009 study “Exhaled Droplets Due to Talking and Coughing“, which analyzed generated droplets in a controlled environment.

The model accounts for the relevant physical phenomena affecting the particles, which are the drag and gravitational force on the droplets and the droplets’ evaporation rate. The drag force includes the particle dispersion due to turbulence in the air.

Veryst set the droplet evaporation rate in their model to be a function of the relative humidity, temperature, particle diameter, and speed of the particles relative to the surrounding air. They then calibrated the evaporation rate using the Wells evaporation-falling curve. This curve demonstrates that small particles fall slowly and evaporate quickly, while large particles fall fast and evaporate slowly. For example, at 50% relative humidity, and a temperature of 18°C, a droplet with a diameter of 50 µm would completely evaporate in 4 seconds, but a droplet 150 µm in diameter would fall to the ground in ~4 seconds before fully evaporating.

Below, you can see that the droplets in the study are represented by a variety of colors based on their diameter. As expected, larger droplets fall close to the rear runner’s legs, while smaller particles tend to hit the rear runner’s face and upper body.

Veryst’s model of the motion of exhaled particles between two runners (left and middle). Image of where the particles land on the rear runner (right). The color scale shows particle diameter in µm. Note: Particles are scaled up for visualization purposes.

According to Elabbasi, the simulation results are sensitive to a variety of variables. However, a comprehensive sensitivity study still needs to be performed on this model. That said, Veryst did analyze how changing turbulent kinetic energy in their model affected their results. The team found that completely ignoring the effect of turbulence resulted in a narrow spread of the droplets, while significantly increasing the effect of turbulence resulted in a massive spread of the droplets. Both cases represent unrealistic bounds on turbulence, which Versyt selected to check the sensitivity of their modes. 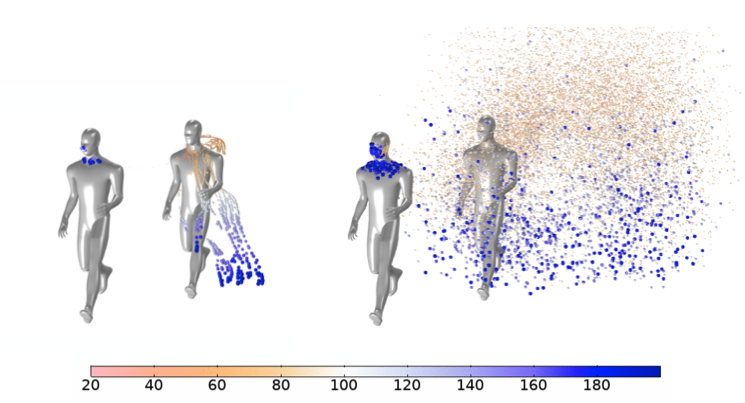 This work shows that simulation is a powerful tool for modeling particulate flow in an open space, and it has the potential to be used to help develop guidelines that slow down the spread of pathogens in both open and closed spaces.

Want to see more simulation studies performed by Veryst? Check out the Case Studies on their website.

Read more about the use of simulation to help mitigate the spread of epidemic diseases on the COMSOL Blog: 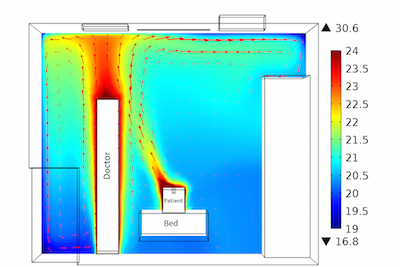 Is It possible to download Comsol file? or any pdf and help?

The model discussed here isn’t available on the COMSOL website, but feel free to reach out to Veryst if interested.