If you have ever stood next to a transformer, you have probably heard a humming sound coming from it and wondered if there were bees close by. When you hear that sound the next time, you can rest assured that it’s not bees but the magnetostriction of the transformer core that is making that humming sound.

Magnetostriction is an effect that causes a change in shape in all magnetic materials when they are exposed to a magnetic field. For example, a piece of iron would elongate by 0.002% and nickel would contract by 0.007%. This observation generated significant interest during World War I due to the application of the phenomenon in SONAR design. Further research resulted in the creation of engineered magnetostrictive materials such as Terfenol-D and, more recently, Galfenol, which exhibit elongation as large as 0.04 to 0.2%.

As a consequence of this bidirectional magnetomechanical coupling, we also see an Inverse effect where stress acting on a magnetic material can change the magnetic state of the material itself by reorienting these tiny magnets. The Direct and Inverse effects are respectively used in actuation and sensing applications.

Where Magnetostrictive Materials Are Used

Magnetostrictive materials have something to offer to almost every industry, ranging from aerospace and oil production, to acoustics and MEMS. Some of the important commercial applications are listed below:

You can also use them to turn the walls or windows in your living room into speakers!

So, how can you model this interesting phenomenon in COMSOL Multiphysics?

The right recipe for modeling magnetostrictive transducers involves accurately simulating the magnetic and structural behavior, while also capturing the interaction between these physics using an appropriate material model. COMSOL provides you with predefined physics interfaces to set up the magnetic and structural simulations. It also provides you with the flexibility to set up user-defined custom constitutive laws to mathematically represent the material model. 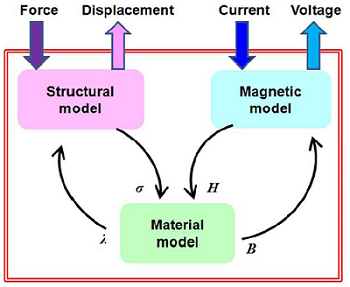 Experimental evidence shows that both the Direct and Inverse magnetostrictive effects are nonlinear. It could be important to model the full nonlinear response when simulating devices that operate under quasistatic conditions but are exposed to a large range of mechanical forces and magnetic fields. In such devices, it may be useful to know under what operating conditions the magnetostrictive core saturates. Such information can provide a designer’s limit and also explain the realistic nonlinear behavior, such as a change in sensitivity of a sensor or the maximum force from an actuator, which a user can expect to get from the magnetostrictive device.

In acoustic transducers that operate at certain known frequencies and under a known set of operating conditions, it is possible to simplify the material model by using linear constitutive laws. These laws (or equations) are derived under the assumption that the transducer operation involves small oscillations about a bias point. Making such practical considerations in the modeling approach allows us to easily simulate the response of magnetostrictive transducers over a wide range of operating frequencies.

In COMSOL Multiphysics, it’s possible to set up both the nonlinear and linearized constitutive equations for modeling magnetostrictive devices. Here, I would like to share with you some snapshots of the results that we got from simulating an experimental transducer.

A typical transducer has a magnetostrictive core surrounded by a drive coil. A magnetic field is produced by the current flowing through the coil. The transducer has a steel housing that encloses the drive coil and the core. The core is attached to a piston that is used to transfer the displacement of the core to an external mechanical component in an actuator configuration, or transfer the load from an external mechanical or acoustic source onto the core in a sensor configuration. The steel housing, piston, and core also create a closed magnetic flux path. 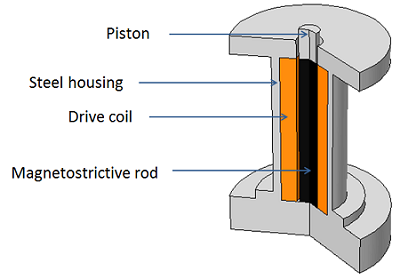 For the nonlinear model, we used typical material characterization curves of Galfenol and were able to identify the nonlinearity in important design parameters, such as the transducer’s blocked force. We were also able to explore the variation in actuation and sensing behavior as a function of a wide range of magnetic fields, and both tensile and compressive loads acting on the transducer. For more information on this model, check out the Nonlinear Magnetostrictive Actuator and Sensor tutorial in our Model Gallery. 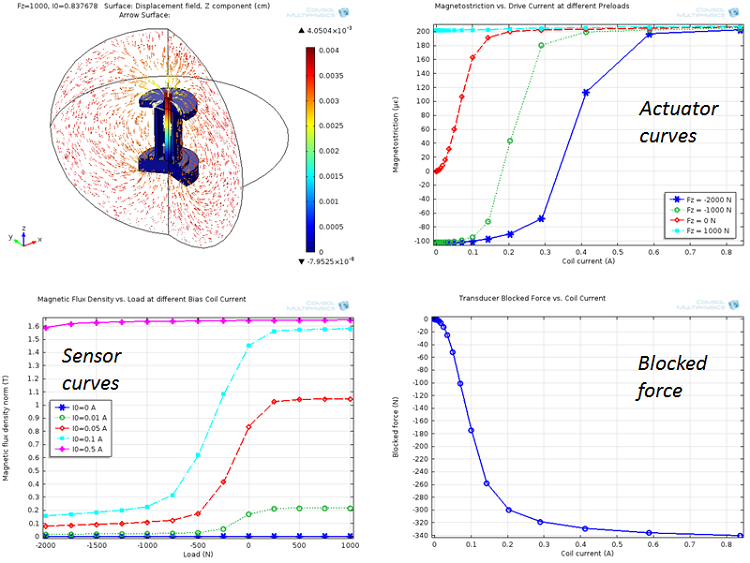 For the linear model, we used typical material parameters of Terfenol-D and were able to generate the actuator load lines. We were also able to explore the frequency response of the amplitude and phase of transducer displacement and drive coil impedance. 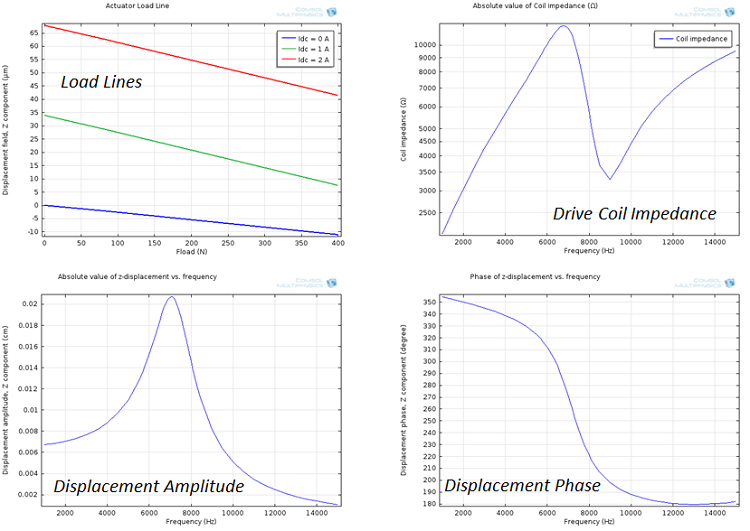 Keynote on Magnetostrictive Transducers at the COMSOL Conference 2013

Not long ago, my colleague Bernt mentioned in a blog post that Dr. Julie Slaughter from ETREMA Products will be delivering a keynote talk on modeling magnetostrictive transducers using COMSOL Multiphysics at the COMSOL Conference 2013 in Boston. If you’re a magnetostriction enthusiast like I am, you would definitely not want to miss the opportunity to sit in on her presentation. 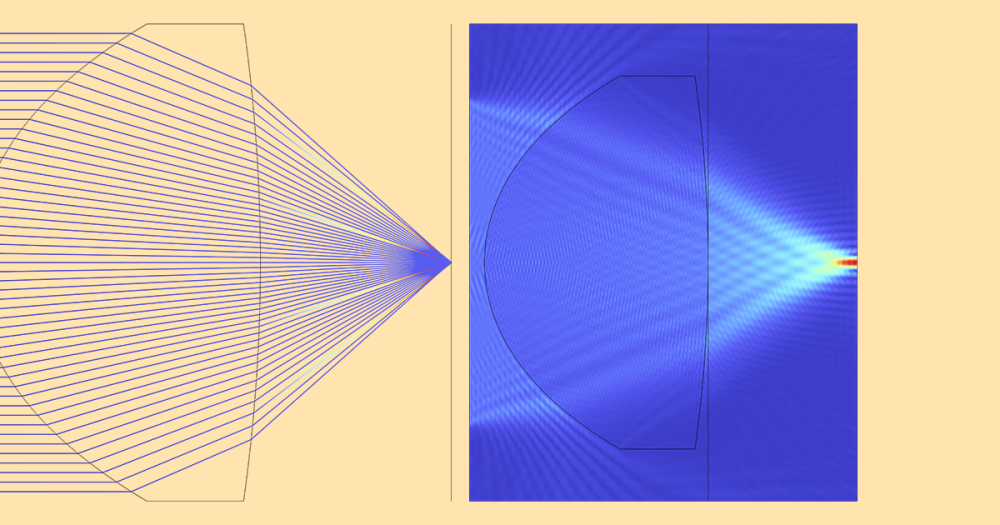 I am really interested in this topic. Could you please provide me with more materials or tutorials on simulation for smart materials? There is only one tutorial in the Gallary.

We want to model magneto-elasticity and magneto-plasticity?
Can COMSOL provide the service?
If not, would you please recommend some consultants who can help?