A mixer that doesn’t move may sound like an oxymoron, but it’s not. Used in various chemical species transport applications, static mixers are inexpensive, accurate, and versatile. Still, there is always room for improvement. Optimizing the design of static mixers calls for computer modeling, but traditional CFD methods may not be the best way to model these mixers. How do these motionless mixers work and how can their performance be simulated?

Static mixers involve pumping two streams of fluid (liquid or gas) through a pipe containing twisted blades. The different angles of the blades are what prompt the mixing of the fluid. As the fluids are forced up the tube, they bounce off the blades and eventually blend together. Static mixers are used in many different industries, including water treatment, petrochemical, automotive, pharmaceutical, and more.

As this type of mixing produces small losses in pressure it is a great technique for laminar flow mixing. Laminar flow is characterized by low momentum convection and high momentum diffusion. As opposed to turbulent flow, which is less orderly and leads to lateral mixing, laminar flow happens at lower speeds.

In optimizing the design of a static mixer you can look at the problem in two parts. The mixer performance can be evaluated by calculating:

Let’s suppose we have a chemical species that is to be dissolved in water at room temperature. First we will use COMSOL Multiphysics and the Chemical Reaction Engineering Module to calculate the concentration’s standard deviation. This step allows us to compute the fluid velocity and pressure as it moves through the tube from inlet to outlet. Here you can visualize the mixing process through a series of cross-sections: 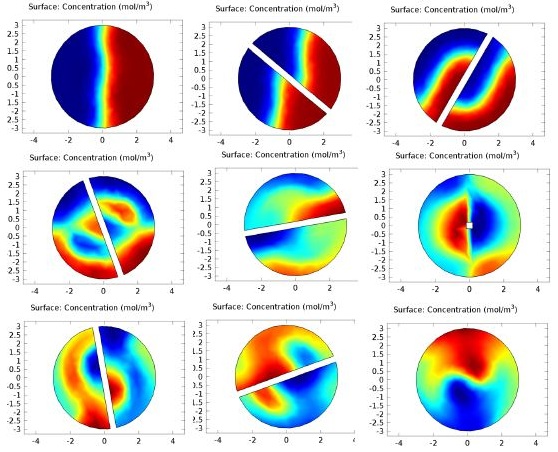 Cross-sectional plots of the concentration at different distances from the inlet of the tube.

In the second step, we will need to use the Particle Tracing Module in order to determine the particle trajectory through the tube. This is performed as a separate study, after step 1. Not all particles of the fluid will make it all the way to the outlet of the tube; some will cling to the mixer walls. By running the problem in the Particle Tracing Module we can determine how many particles will be stuck inside the mixer. 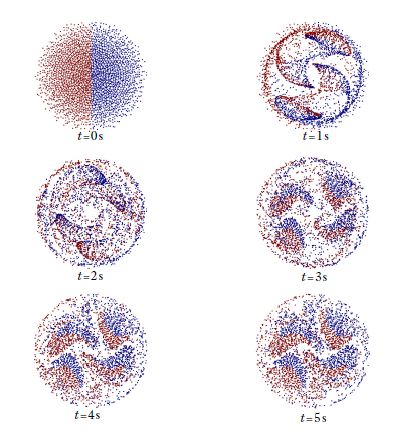 Plot of the particle position at different points in time. The red and blue particles represent two different fluids.

As mentioned above, when modeling static mixers, traditional CFD methods may not be cut out for the job. This is because of numerical diffusion, which does not emulate the mixing process in that the computer model shows a higher diffusivity than it actually is. This problem is tackled in an article on “Modeling of Laminar Flow Static Mixers” (on page 64) in the 2012 edition of COMSOL News. Here you can see how Veryst Engineering and Nordson EFD went about optimizing this type of mixers. They wound up developing a new modeling tool for their simulations, using both the CFD and Particle Tracing Modules. It’s a rather fascinating case study, so if you’re interested in optimizing mixer designs, I recommend reading the article.