Studying Fluid Flow and Reactions in Gases and Liquids

The Chemical Reaction Engineering, CFD, and Plasma modules all include different variations of the equations for the transport of chemical species in a concentrated solution, such as the Maxwell-Stefan equations and the mixture-average model. In a concentrated solution, the model equations have to account for the interactions between all species in a solution, while a model of a dilute solution only includes the interaction between the solute and the solvent. The schematics below illustrates the difference between these two descriptions.

Along with these interactions, the velocity field in a concentrated solution is defined as the sum of the flux over every species, i:

where n denotes the flux in kg/(m2s), and ρ represents the density (kg/m3). For a dilute solution, the velocity field is given by the velocity of the solvent:

As we can see from the images above and Eq. (1), the transport of species and fluid flow are tightly coupled for concentrated solutions.

With the new Reacting Flow interface for a concentrated solution, you can handle this tight coupling while maintaining the ability to manipulate the transport equations and the fluid flow settings separately. The coupling itself is defined in the Multiphysics node. With such functionality, you can, for instance, change from laminar flow to turbulent flow or change the transport model from the Maxwell-Stefan equations to the mixture-average model.

Let’s see how this is manifested in the model tree and in the settings for the Multiphysics node. As the following screenshot shows, all of the usual nodes for the constituent physics interfaces can be modified while the coupling is predefined in the Multiphysics node. The predefined coupling controls the mass fluxes and, when summed over all species, satisfies the continuity equation for the flow. As such, the two sets of equations are fully coupled in a bidirectional way. 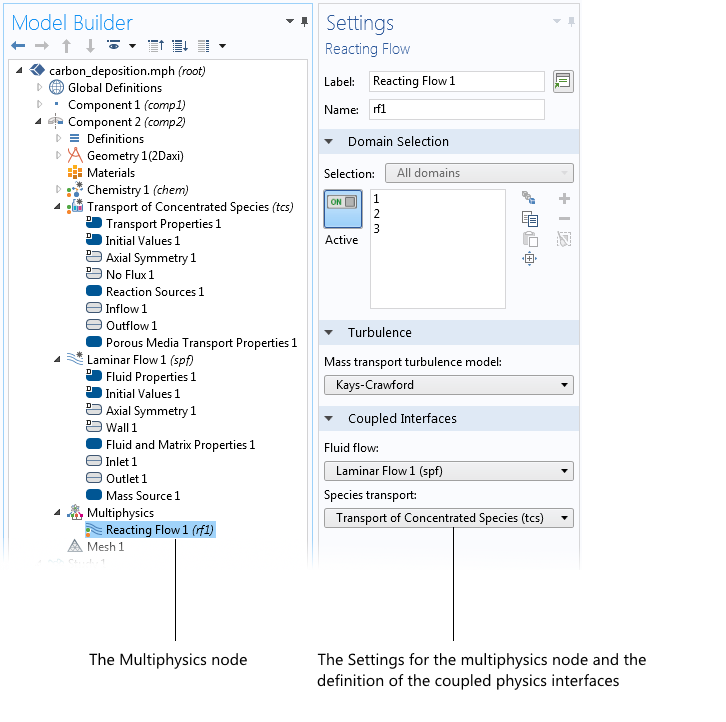 The model tree with the Reacting Flow multiphysics node selected. Here, we can select which physics interfaces to couple. We can also make changes to the flow model that allow us to include turbulent reacting flow. This is an additional flexibility, with preserved ease of use, as compared to previous multiphysics interfaces.

Another benefit of the new Reacting Flow multiphysics interface is found in the Study node. We have the ability to solve for the fluid flow equations to obtain a decent initial guess for the total flux. In a second step, we can solve only for the transport of species, with the velocity field given by the previous solution of the fluid flow equations. 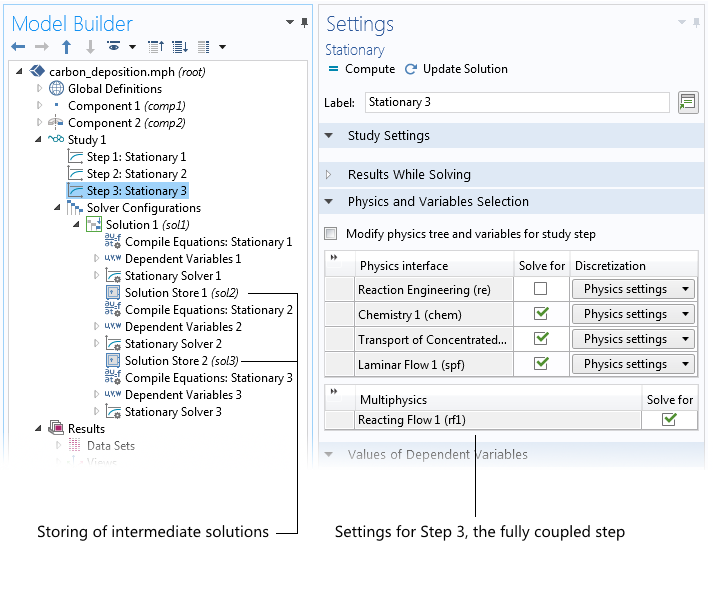 The three study steps (1, 2, and 3) solve for the fluid flow, the transport of chemical species, and the fully coupled problem, respectively. The automatically generated solver configuration shows the intermediate steps that store the flow field, the concentration field, and the final step that then solves for the fully coupled problem using the stored solutions as an initial guess.

By utilizing the new Reacting Flow multiphysics interface, you have the ability to solve a range of interesting problems, such as the one shown below. In this case, we can see the flow and concentration in a tubular reactor that converts methane into hydrogen. The model combines the transport of species in concentrated solutions, fluid flow in free and porous media, and heat transfer with the endothermic reactions and the heated jacket on the reactor’s cylindrical outer walls. 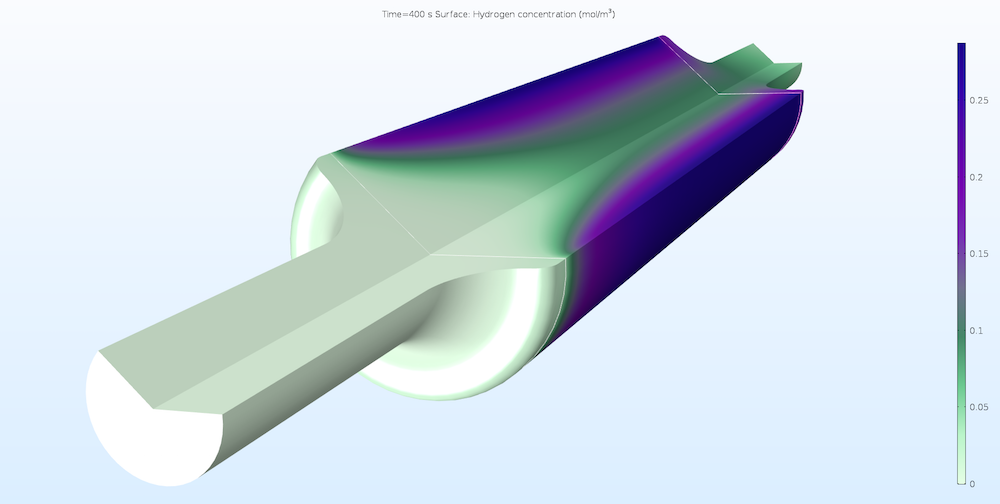 Concentration of hydrogen in a reactor that converts methane into hydrogen. The reaction is endothermic and heat is supplied at the cylindrical walls, which yields a higher hydrogen production close to the walls.