Sensing the Bio in Biosensor Design with a Simulation App

Biosensors are the workhorses of the analytical tools used for detailed mechanistic understanding at the molecular level of biological systems. The applications of these analysis tools are countless for the detection of biomolecules in the pharmaceutical, healthcare, and food industries; agriculture; environmental technologies; and in general for research of biological systems. The biosensor demo app is a good example of an application where nonexperts can benefit from accurate multiphysics simulations.

From Descriptive to Hypothesis-Driven Research

Theory and simulations, assisted by clever experimental techniques, have allowed for an increased detailed mechanistic understanding of biological systems, at the molecular level. This understanding has resulted in a myriad of methods for detection of biomolecules that play significant roles in drug discovery and targeting, microbial and virus detection, gene therapy, and other processes in biotechnology. The applications are countless in fields such as healthcare, agri-food, and environmental technology.

Biosensors are key components of the analytical techniques for detection and measurement of biomolecules. The Biosensor Design demo app, included in the latest version of COMSOL Multiphysics, predicts the results from measurements of a biomolecule’s concentration (or activity) from an understanding of this molecule’s attachment to an enzyme. The simulation app can be used as an example of how to optimize the design of the detector in order to achieve a well-defined signal.

The figure below shows one possible arrangement of detector micropillars in a biosensor subjected to an analyte flow from left to right. The gold-colored concave parts of the pillars are coated with an enzyme that can only attach to a specific group of biomolecules. 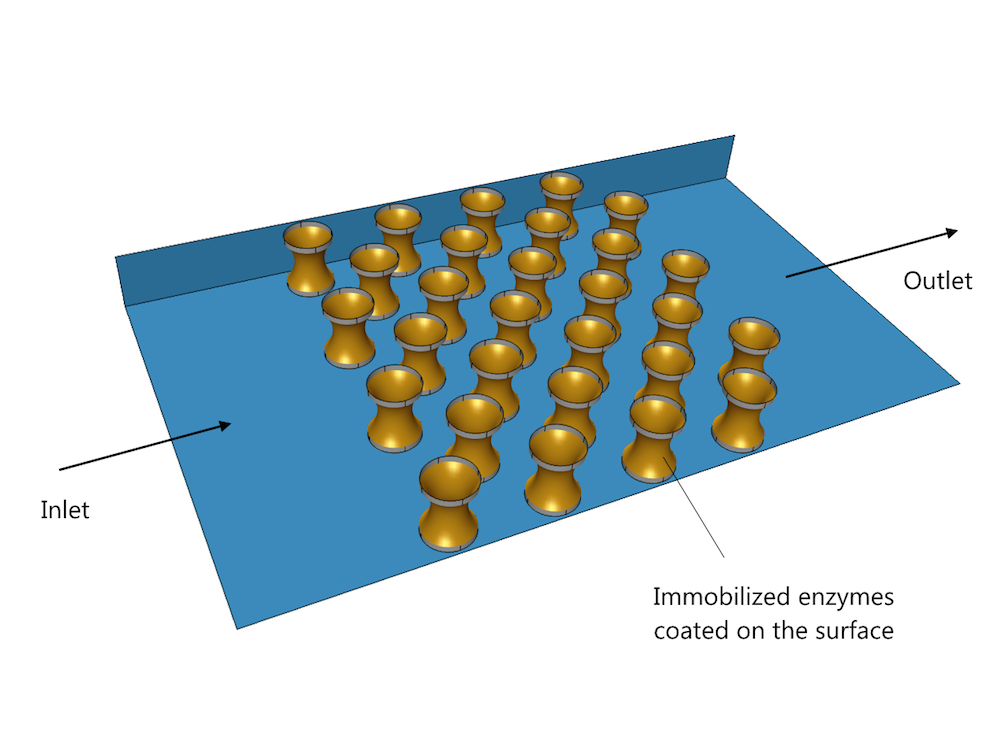 The biomolecules are adsorbed to the enzyme-coated pillars, where they can be measured by, for example, fluorescent detection. Enzymes serve as excellent receptors, since they can only attach to one biomolecule or to a very specific group of biomolecules. A second reaction quenches the adsorbed biomolecule, decreasing fluorescence and so weakening the signal from the detector. 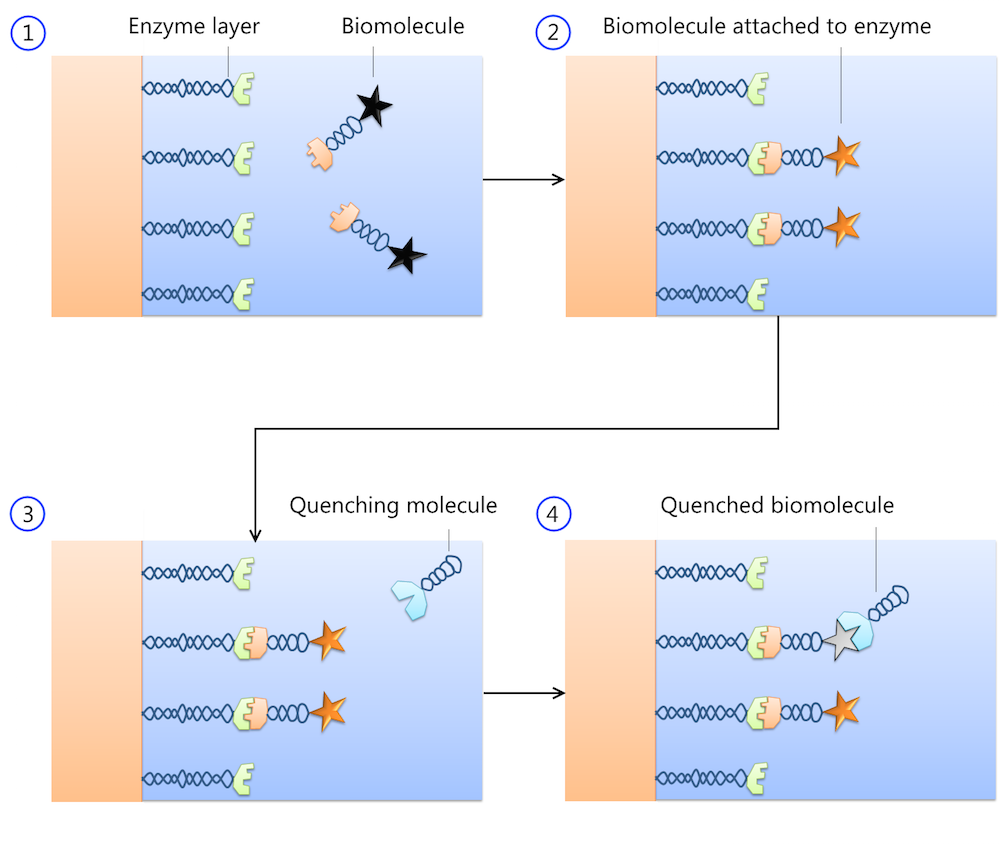 We recently introduced a new Biosensor Design demo app, where the user can change the following parameters:

Here is what the user interface (UI) looks like, with annotations for where the input is entered and the results are visualized: The app’s UI is very easy to use. A few relevant input fields and command buttons are available together with the most important output.

There is minimal hassle when defining the simulation and you do not have to be an expert in simulations to benefit from accurate multiphysics modeling, by gaining understanding, and optimizing your biosensor system.

The embedded model defines and solves the fluid flow equations and the equations for transport and reaction of biomolecules, including the kinetics for the surface reactions.

Simulation of Injection and Detection of Biomolecules

The animation below shows the time-dependent concentration field of the measured biomolecules as a 3D surface (where the height and color of the surface indicates concentration), after injection of the analyte.

Animation showing the concentration field of a biomolecule in the analyte sweeping over the pillars like a wave. The color legend and height of the wave represent concentration in mol/m3. 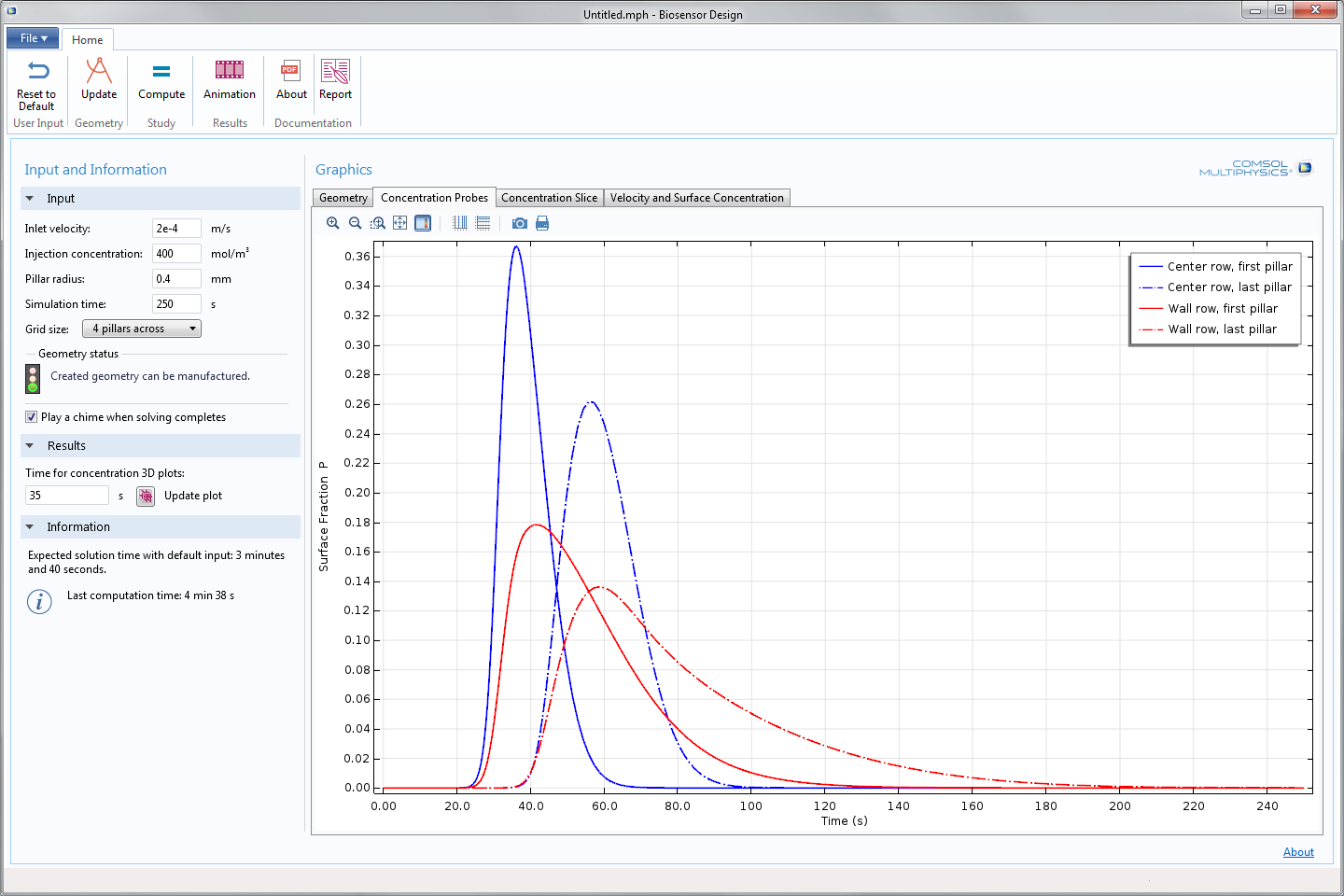 Concentration of the measured biomolecule at the surface of the enzyme-coated pillars at different positions in the cell.

The app demonstrated here is one example of countless possible biosensor design configurations. This specific configuration may not be optimal for your purposes, but the app can be broadly used by you to build similar apps with clear and simple interfaces that inspire users to simulate and improve the design of biosensors.

Get Started Building Your Own Biosensor App