Stick a TV to the Wall Using Gecko Feet

Gecko lizards use dry adhesion forces to climb vertical and even backward-slanting walls. Yet, despite the strength they provide for holding their body to such walls, you can easily pluck them from their surface, and no residue is left behind. Imagine doing that with a TV.

A group of scientists at UMass Amherst have developed something that does just this. Their new material, ‘Geckskin’, can be used to stick a 42-inch television to a wall.

We once modeled the use of a gecko foot as a series of many small cantilever beams, which represent the setea or small hairs on the gecko foot. Crosby and colleagues have found that setae are not required for gecko-like performance. Instead, the skin is woven into a synthetic “tendon,” yielding a design that plays a key role in maintaining stiffness and rotational freedom, as shown in the picture. I’d like to see a model about that. 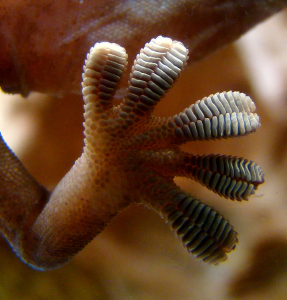 Picture was taken by Bjørn Christian Tørrissen. It is available pursuant to the Creative Commons License.