Many professors would agree that transport phenomena courses are as difficult to teach as they are important. Graduate students too would agree that translating Fourier’s law or Navier–Stokes equations into a mental image of the flow patterns of heat and fluid in a system is no easy task. Most transport equations are nonlinear, comprising partial differential and/or integral equations that also often involve complex coupled systems. The associated material properties are often functions of temperature, pressure, and several other parameters.

In the classroom, students learn to solve these transport problems using simplifications, including linearizing, approximating, and using accepted assumptions. While this is undoubtedly the best way of developing a basic understanding of solving numerical problems, these simplifications mean the solutions are, to some extent, erroneous. In real-world applications, this is problematic, as it is normally impossible to even estimate the magnitude of the error without any external empirical data.

With the COMSOL Multiphysics® software, the ability to couple multiple physics, add custom materials, and define complex domain and boundary conditions provides a simple solution to draw focus on the actual physical processes. Conducting virtual demonstrations and experiments using simulation tools is low risk; quick; and, in some cases, provides a more attractive visual medium than a physical experiment.

Most simulation software have a significant learning curve before a user is able to build multiphysics models without any assistance. Simulation apps have a major benefit in this regard, as they can be built to have an extremely simple, student-friendly user interface with only the required fields and graphical windows. Rather than focusing on the tools and the computations running in the background, a simulation application brings to focus only the necessary components of the experiment.

At the Birla Institute of Technology and Science (BITS), Pilani – Goa Campus, one of India’s premier technical institutes, simulation tools had been largely restricted to graduate and doctoral students, as well as final year undergraduate students working on specific research projects. Dr. Amol Deshpande, assistant professor in the Department of Chemical Engineering, had been one of the institute faculty members using simulation for research as well as encouraging the use of simulation among students.

While looking for ways to improve conceptual learning among his students, Dr. Deshpande, who teaches transport phenomena courses including a computational fluid dynamics laboratory course at BITS Pilani, Goa Campus, decided to explore teaching methods beyond the scope of the conventional classroom. Without making any drastic changes to the curriculum, Dr. Deshpande began the process of gradually implementing simulation as an ungraded component of the computational fluid dynamics laboratory course. This allowed students to develop an interest in the subject matter through interactive visualizations without the pressure of having to learn a new software or having it affect their grade. Without the fear of this added component affecting a student’s report card, they were more likely to experiment and test out various hypotheses using simulation apps, which they might have been hesitant to test out otherwise.

Dr. Deshpande believes the use of simulation apps greatly reduces the number of physical demonstrations required to understand a concept. For example, he supplemented an experiment on fluid flow through a pipe with a simulation app. Students are free to experiment by changing any of the available parameters, such as inlet velocity, average flow rate, and even the properties of the fluid involved. In a conventional laboratory setting, the reason behind the resulting parabolic velocity profile isn’t immediately evident. However, by interacting with and manipulating the physical phenomena and the governing conditions, students are able to deepen not only their conceptual knowledge but also their scientific curiosity. 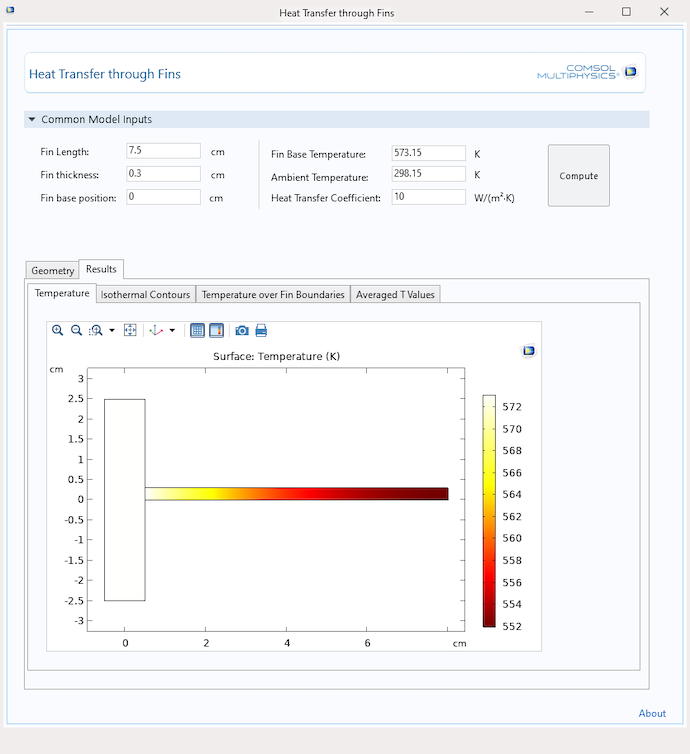 A simulation app for simulating heat transfer through a finned pipe.

The biggest advantage of a simulation app when compared to physics modeling software is that it can be made as simple or complex as needed for its intended purpose. The application interface for the finned pipe experiment contains a limited number of input fields, which the student can modify to explore different hypotheses and observe the effects of the changes on the physical phenomena. 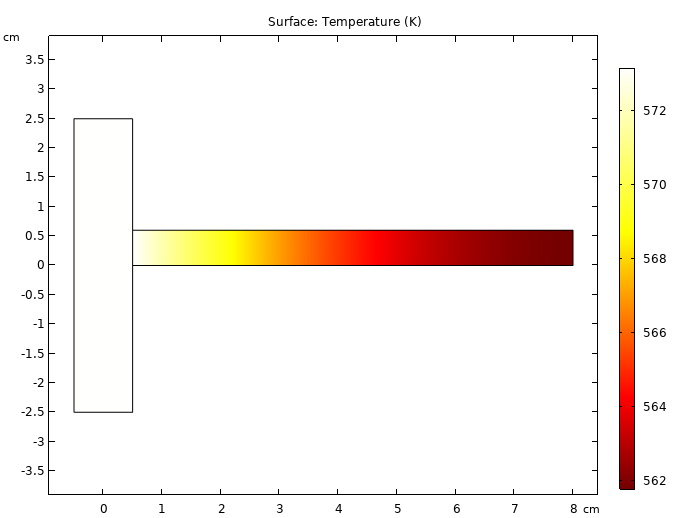 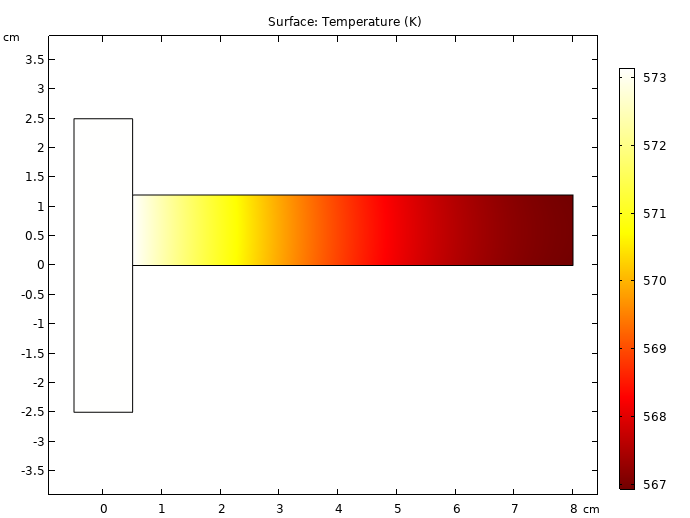 Here’s another simulation app that the students can use to study fluid flow past a cylinder. 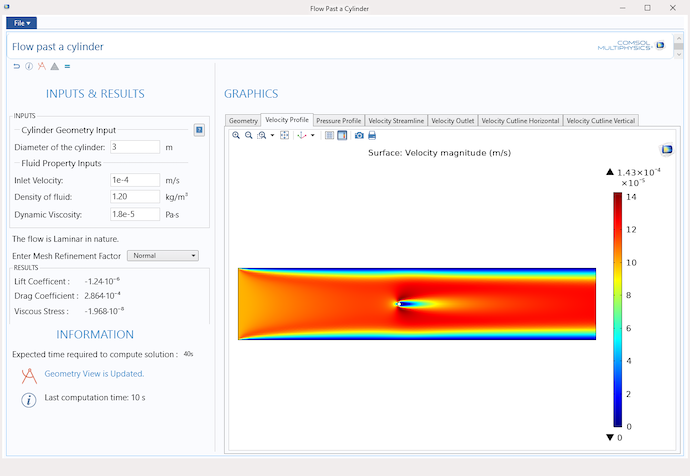 Simulation app for studying fluid flow past a cylinder.

Understanding the underlying mechanics of real-world flow systems via a physical demonstration requires extensive effort, from building geometries resembling real-world systems to creating conditions and perturbations that resemble those in nature. These representative models are a great tool for observing ideal, simple flow systems. However, they fall short when it comes to painting a clear picture of the flow lines or depicting the reasons behind velocity changes.

This app simulates laminar flow through a cylinder. Users can observe how the velocity profile changes with changes in geometry by running simulations with varying cylinder diameters. Also, aspects such as pressure profiles, which are nearly impossible to observe in a physical setup, can be understood in detail. Besides this, there is also an option to model different fluids by changing the density and viscosity properties.

Most engineers need a strong grasp of the basic processes and laws of transport phenomena — although it might not be immediately obvious to a student losing sleep over their transport phenomena coursework! Either way, they certainly need to develop the ability to formulate simple engineering models to apply engineering reasoning to real-world thermal and fluid systems.

Students need to know how to solve differential equations and come to solutions for these complex flow and transport problems. Simulation takes these concepts a bit further by turning this jumble of abstract symbols and numbers into high-quality visuals. The use of simulations coupled with hands-on solving of math problems serves a holistic form of teaching and learning as students find mathematical solutions intuitively, rather than by memorizing formulas and learning the steps to solving a problem.

Over the last semester, Dr. Deshpande has been using simulation apps as part of an ungraded component in his laboratory course. He states that undergraduate students are quite enthusiastic about computational methods and students taking this laboratory course responded positively to this addition — with some even expressing an interest in doing individual modeling projects.

Currently, the laboratory course structure is such that after a physical experiment is completed, students are given a similar exercise to try out using the associated simulation app. Students change the available parameters, interact and play with the geometries, and processes and acquire a firm grasp on concepts through inquiry-based learning.

In the upcoming semester, Dr. Deshpande looks forward to including simulation as a graded component to his course. This includes simulation-app-based exercises, with experimental analysis and a viva voce (a verbal assessment) based on the student’s lab report.

What Lies Ahead for Simulation-App-Based Teaching?

Dr. Deshpande finds apps to be an extremely useful tool for professors. As he explains: “We can reduce the number of experiments required, and it will also help design systems in a more efficient way.”  He also says that some of the major challenges in teaching undergraduate engineering courses lie in the newer domains and technologies, such as nanotechnologies and advanced biological systems. The introduction of simulations in these new and advanced courses would be greatly beneficial to professors as well as students.