This week, the Royal Academy of Sciences awarded the 2019 Nobel Prize in Chemistry to researchers John Goodenough, M. Stanley Whittingham, and Akira Yoshino. The researchers were awarded this prestigious prize “for the development of lithium-ion batteries”. In celebration, we discuss the timeliness (and timeline) of their research and award…

Many states and countries have their own renewable energy goals, making the need for new methods of renewable energy as timely as any. In turn, Li-ion batteries become an important field of study. 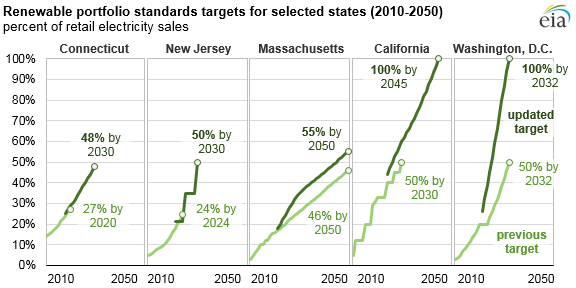 Goals for renewable portfolio standards for select U.S. states by the year 2050. Developing and implementing lithium-ion batteries can help us reach these targets. This work is in the public domain in the United States because it is a work prepared by an officer or employee of the United States Government as part of that person’s official duties under the terms of Title 17, Chapter 1, Section 105 of the US Code. Image via Wikimedia Commons.

The Timeline of the 2019 Nobel Prize in Chemistry

The researchers awarded this year’s Nobel Prize in Chemistry are located around the world. John Goodenough is based in The University of Texas at Austin in the U.S.; M. Stanley Whittingham works with Binghamton University, State University of New York, also in the U.S.; and Akira Yoshino is jointly based in Asahi Kasei Corporation in Tokyo, Japan, and Meijo University in Nagoya, Japan. As we’ll read below, the researchers’ work spans over decades as well as miles.

The work of these Nobel-Prize-winning researchers started during the oil crisis of the 1970s, which inspired M. Stanley Whittingham to investigate energy technologies that do not rely on fossil fuels. He discovered a superconducting material that is extremely rich in energy and used it as a cathode for a lithium battery.

Fast forward to the 1980s, when John Goodenough swapped out the original material of Whittingham’s cathode with a metal oxide, greatly increasing the power output. Akira Yoshino built upon this work to develop the first lithium-ion battery viable for the commercial market. He again made a swap: This time, changing the reactive lithium in the anode with petroleum coke. This development also enabled the battery to be charged over and over again before degrading. This battery entered the market six years later.

As of October 2019, all three researchers have been recognized for their devotion to developing Li-ion batteries as an energy-efficient option for power with the paramount award for chemical research: the Nobel Prize in Chemistry.

Battery research — including the development of lithium-ion batteries, solid-state flow batteries, redox flow batteries, and more — is just one piece to the renewable energy puzzle. With research such as this, we can continue to rely less on fossil fuels, and maybe even eliminate the need for them entirely someday.

As the 2019 Nobel Prize in Chemistry proves, lithium-ion battery research is a powerful thing.