“The Bumblebee Flies Anyway” was a book by Robert Cormier that I read as a young teenager. In it, Cormier describes how bumblebees are natural anomalies as they seemingly do not have the aerodynamic capability to actually fly. Their wing span and flapping speed should not provide enough lift to allow flying, and this is a fact that I have always associated with bumblebees since. Yet, this has been proven not to be true, as a closer investigation of the rotation of and vortices around a bumblebee’s wings, along with a proper aerodynamic calculation, indicate that bumblebees are perfectly able to fly. 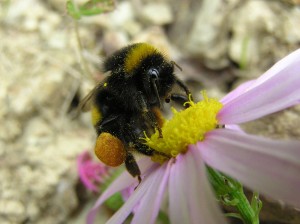 A bumblebee loaded with pollen in its pollen baskets. Image taken by Tony Wills and published under the Creative Commons Attribution-Share Alike 3.0 Unported license.

But now the bumblebee has struck back by demonstrating an alternate type of anomaly in the natural world. An article we found in Nature: NEWS references research (originally published in Science) identifying the bumblebee as the first documented insect to be able to sense electrical potential. Through the flapping of their wings, bumblebees build up electrical potential on the hairs of their bodies, which is useful when landing on a flower as the static electricity allows the pollen to stick to them. 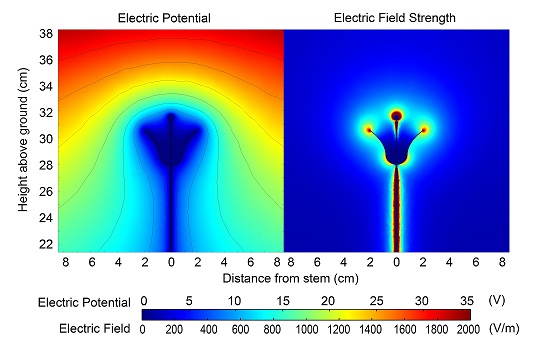 The scalar electric potential (left) and electric field strength (right) of a simple floral geometry with inflorescence 30cm from the ground, modeled as a grounded conductor in an air domain, in the presence of a fair weather atmospheric electric field (100V/m). Image provided courtesy by Dominic Clarke, University of Bristol, and was originally published in Detection and Learning of Floral Electric Fields by Bumblebees, Clarke, D., Whitney, H., Sutton, G. & Robert, D. Science (2013).

Signals to its Friends

A group from the University of Bristol, UK, has proven that bumblebees use this electric potential in a far more sophisticated way. When a bumblebee lands on a flower a charge is passed to it, giving the flower an electric potential. This may act as a signal to other bumblebees that this flower is worth visiting.

Through a series of experiments, the group was able to show that bumblebees were able to discriminate between artificial flowers with differing electric fields at biologically relevant strengths. Their results are published in Science, but you can read about their findings and see a simulation of the electrical potential around a flower here.