If you roast a turkey for dinner and you need to check the temperature, the technology exists to find it. But what happens if the temperature is so hot that a consumer-grade thermometer, or any man-made device, really, would instantly melt and be destroyed? This might not be a common occurrence in your kitchen, but it is a real concern in blast furnaces, where temperatures can reach close to 1,500°C. Simply guessing is far from safe. Luckily, by simulating with COMSOL Multiphysics combined with the Heat Transfer Module you can accurately determine temperatures when measurement tools fall short.

A blast furnace is used to produce industrial metals with different compositions, shapes, and degrees of purity. The metals are processed in a molten state that is reached at extremely high temperatures. This makes it very important to keep workers and production equipment safe. When the molten metal first leaves a furnace through a taphole and travels through a runner where the slag is separated out, it could splash and cause a halt in production, and even damage equipment and harm operators.

Molten metal exits a blast furnace (left) and travels through a runner, where slag is separated from the cast iron (right).

A strong, reliable barrier is necessary to contain splashes and provide protection. As you can read on page 20 of COMSOL News 2013, a company called Terres Réfractaires du Boulonnais (TRB), part of Groupe CB, uses a thick concrete liner to contain the molten metal as it exits the blast furnace. This liner is subject to many effects, like thermal shock, corrosion, and erosion. A typical roof runner only lasts for one month before it needs to be relined. One blast furnace can have two, three, or even four taps, and at TRB there are hundreds of blast furnaces — so quite a lot of taps. This calls for a lot of heavy materials to handle, so TRB wants to avoid over-engineering them and find a design that is as light, robust, safe, and economical as possible.

In the past, TRB used trial and error methods to come up with the best type of concrete for liners, and to determine the ideal thickness. If a liner was damaged too quickly, they just kept trying out new combinations. They ran all of these experiments without knowing what the temperatures were in the roof runner. They could not place expensive sensors inside because extreme heat and splashing molten metal would destroy them. 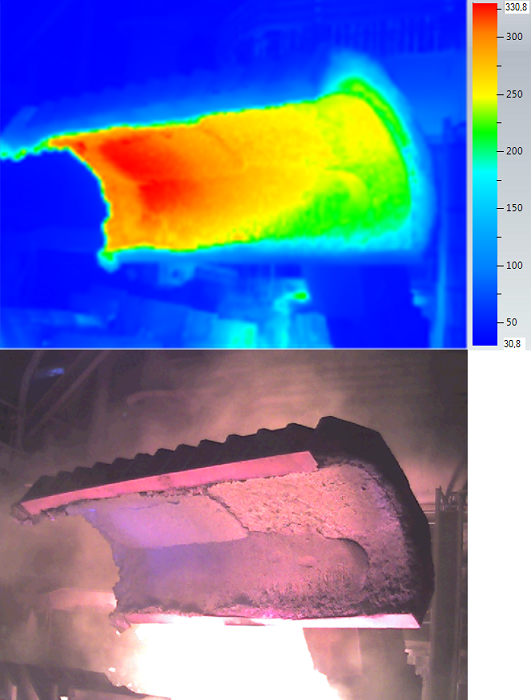 Thermograms of the inside of a roof runner (top) and a standard photograph from the same angle (bottom). This is basically the only way that TRB can measure the temperature characteristics of their process, and it was used to verify the model.

TRB turned to COMSOL Multiphysics and the Heat Transfer Module to calculate the temperature in the roof runners and optimize their design. The roof runners are made of two different types of concrete. One is in direct contact with molten metal and must resist the scalding fluid, corrosion, and thermal shocks. The second type of concrete never comes in contact with molten metal, and it acts as a mechanical frame for the roof runner. TRB conducted a thorough thermal analysis in which they carefully validated their assumptions in order to set up an accurate model of their blast furnaces. The details of the analysis are provided in the full version of the story available in COMSOL News.

The simulation indicates that, during the first tap, the air becomes almost stationary under the roof runner.

TRB wanted to mimic the real operation of the blast furnace at every point of the process. They simulated pre-heating, the first time the molten metal is tapped and sent through the runner, and even a full week of pauses and tapping to see what temperature the roof runner’s outer cast iron shell would eventually reach.

Before they turned to thermal analysis, TRB could really only guess how hot the blast furnace gets. Thanks to COMSOL Multiphysics, they were able to reach an accurate calculation within 10 degrees.

Until TRB worked with COMSOL Multiphysics, their concrete runners were very thick. With thermal analysis, they learned that they had over-engineered them and that they could reduce the thickness of the concrete. Besides lowering the cost of raw materials in future roof runners by making the liner thinner, if the liners are lighter they will also be easier to maneuver, and this will improve production rates and safety.

This is really great work.