The International Temperature Scale of 1990 (ITS-90) is the industry calibration standard for measuring temperatures throughout the world. The National Physical Laboratory (NPL) works to establish and maintain the ITS-90 through experiments, most notably, thermometer calibration. To better understand and overcome the shortcomings of the experimental process, Jonathan Pearce, at the UK’s National Physics Laboratory, turned to simulation. His results yielded fascinating results about the microscopic behavior of the liquid-solid interface during the freezing process.

The Temperature and Humidity department at the National Physical Laboratory, of which Jonathan Pearce is a team member, works to enhance the accuracy of temperature measurements to preserve and improve the ITS-90. Specified in the ITS-90, the NPL uses standard platinum resistance thermometers, widely accepted as the most accurate thermometers. Even so, when calibrating these thermometers, there is a level of uncertainty involved. For the model used by Jonathon Pearce (measuring the freezing point of zinc), the uncertainty range is 1 millikelvin. 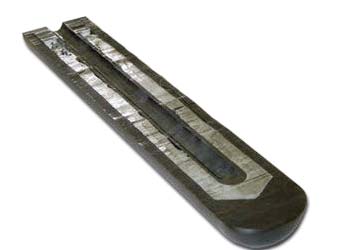 Although the platinum resistance thermometer is the most accurate device used for temperature calibration, the uncertainty of 1 millikelvin could stand to be improved. This uncertainty led Pearce to turn to simulation, to better understand the freezing process at a microscopic level and to identify what the sensors were measuring. Working with Surrey University student Matthew Large, Pearce used COMSOL Multiphysics to delve into the inner workings of the freezing process. The results found that the freezing process is not planar; it is not smooth at the liquid-solid interface. As the liquid begins to freeze into a solid, ripples form at the interface and turn into cells, protruding outwards unevenly (as seen in the image below). This phenomenon could not be predicted or measured using experimentation, however, through simulation, they were able to obtain valuable information in order to redesign the device for more accurate thermometer calibration experiments. 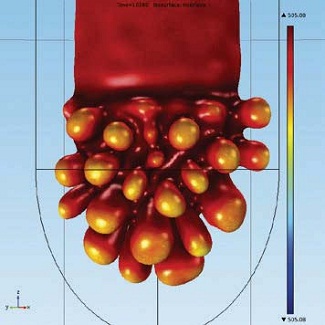