Using the Application Builder to Create a Koch Snowflake

It has been a remarkably warm winter in Boston, but we finally got our first snowfall. As I was staring out the window earlier, I started thinking about snowflakes and how their formation cannot be easily described mathematically. However, there is one special kind of snowflake that can be simply described, known as the Koch snowflake. Today, we will look at how this shape can be built with the Application Builder in COMSOL Multiphysics.

As we have already mentioned on the blog, fractals have some interesting engineering applications. The Koch snowflake is a fractal that is notable due to its very simple iterative construction process:

This procedure is illustrated in the figure below for the first four iterations of the snowflake. 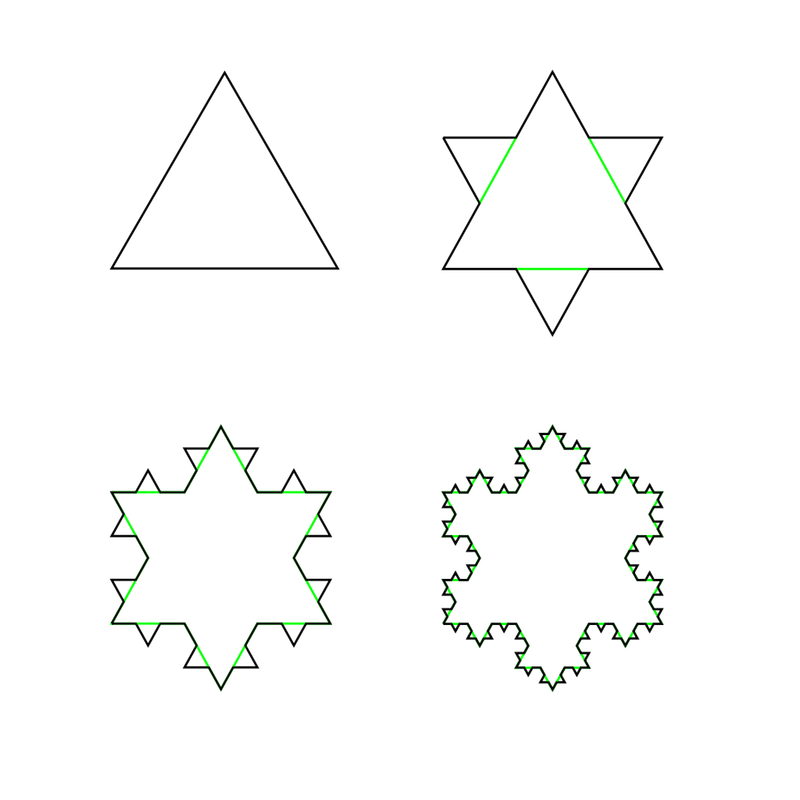 The first four iterations of a Koch snowflake. Image by Wxs — Own work. Licensed under CC BY-SA 3.0, via Wikimedia Commons.

Building the Geometry of a Koch Snowflake

Now that we know what algorithm to use, let’s look at how to create such a structure with the Application Builder and COMSOL Multiphysics. We begin with a new file and create a 2D geometry part within the Global Definitions node. This part takes five inputs: the side length of an equilateral triangle; the x– and y-locations of the midpoint of the base; and the components of the normal vector, pointing from the midpoint of the base to the far vertex, as shown in the images below. 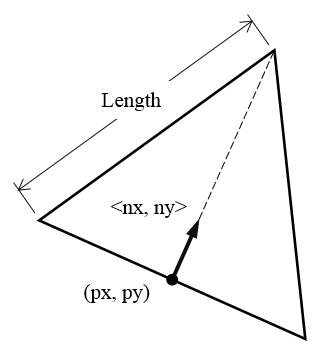 The five parameters that are used to control the size, position, and orientation of an equilateral triangle.

The input parameters for the geometry part are defined.

A polygon primitive is used to define an equilateral triangle.

The part is rotated about the center of the bottom edge.

The part is moved from the origin.

Now that we defined the geometry part, we can call a single instance of the part within the Geometry branch. This single triangle is equivalent to the zeroth iteration of the Koch snowflake, and we are now ready to use the Application Builder to create more complex snowflakes.

Laying Out the App’s User Interface with the Application Builder

The app has a very simple user interface. It has only two features with which the user can interact: a Slider (labeled 1 in the image below) that specifies the number of iterations to take to produce the snowflake, and a Button (label 2) to select, which creates and displays the resultant geometry. There is also a Text Label (label 3) and a Data Display (label 4) that show the number of iterations that are taken, as well as a Graphics window (label 5) in which the resultant geometry is plotted. 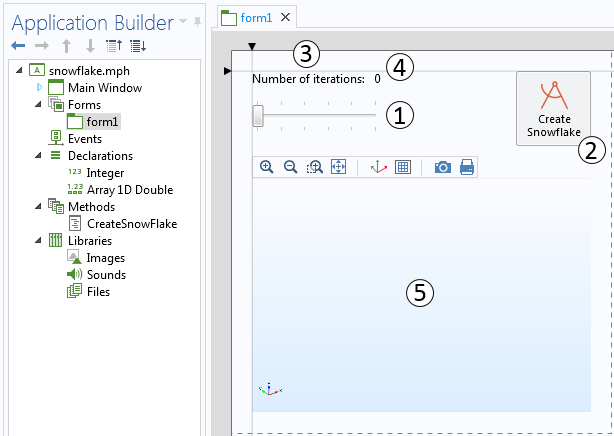 The app has a single form with five features.

There are two Declarations within the app that define an integer value, named Iterations, which is zero by default but changed by the user. There is also a 1D array of double-precision numbers, named Center. A single element in the array has a value of 0.5, which is used to find the centerpoint of each edge. This value is never changed. 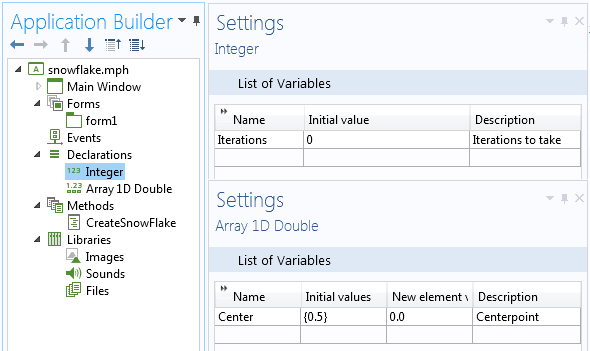 The settings for the two declarations.

The slider feature within the user interface controls the value of the integer, Iterations. The screenshot below shows the slider’s settings and the values, which are specified to be integers between 0 and 5. This source is similarly selected for the Data Display feature to display the number of iterations to take. We limit the user to five iterations, as we use an algorithm that is not very efficient but is quite simple to implement. 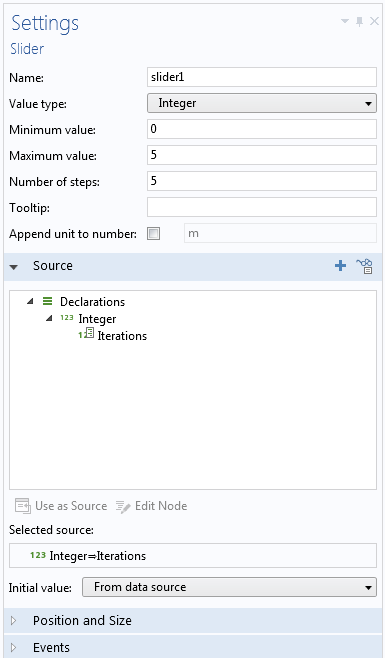 The settings for the slider feature.

Next, we can look at the settings for our button, as shown in the screenshot below. There are two commands that are run when the button is pressed. First, the method CreateSnowFlake is called. Second, the resultant geometry is plotted in the graphics window.

We have now looked over the user interface of our app and can see that all of the geometry creation for the snowflake must happen within the method. Let’s take a look at the code of this method, with line numbers added on the left and text strings highlighted in red:

Let’s go over what each line of code does:

And with that, we have covered everything that goes into our app. Let’s look at some results! 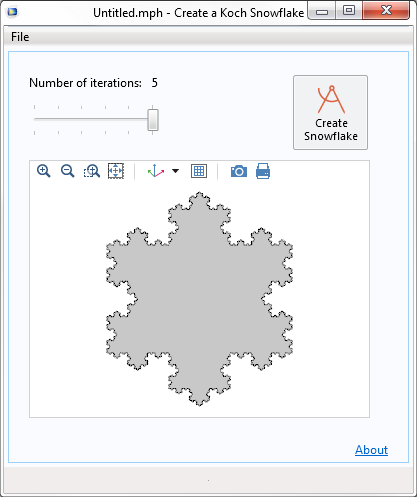 We could expand our app to write out the geometry to a file, or even to perform additional analyses directly. For example, we could design a fractal antenna. If you’re interested in antenna design, take a look at our example of a Sierpinski fractal antenna, or even make one from scratch.

Get the “Modeling a Koch Snowflake” Demo App

If you want to build this app yourself and you haven’t started using the Application Builder yet, you will find the following resources helpful:

Once you’ve gone through that material, you’ll see how this app can be extended to change the snowflake size, export the created geometry, evaluate the area and perimeter, and much more.

Amazing! Despite my near to zero experience with Comsol I managed to create this application a it’s actually working flawlessly. Thank you for this neat tutorial/article. I have one question though. Is there a way to speed up computation of iterations by using some sort of shortcut in the method? Or is this time complexity bounded to Comsol environement/level of abstraction?

Thank you very much for the feedback, it is appreciated.

Regarding the speedup: At each iteration the number of sides increases by a factor of four, so if your are computing the entire snowflake then the algorithm time exponentially increases. The algorithm here admittedly sacrifices performance for readability and terseness. We introduce a lot of overhead by creating intermediate Part Instances and we throw away the existing snowflake iteration before creating a new one. It is, as they say in the textbooks, left as an exercise to the reader to come up with a faster algorithm. You could, for example, use a single “Polygon” feature to create the entire perimeter of the snowflake in one operation for each iteration. This would require more coding and less usage of the built-in COMSOL geometry features.