IEEE Spectrum recently sent out a “Tech Alert” that included an article about vacuum transistors, which combine vacuum tubes and metal oxide semiconductor field-effect transistors (MOSFETs). The article suggests that this technology may wind up replacing traditional silicon transistors.

Back in the day (pre-1950s), vacuum tubes were commonplace in radios, televisions, computers, and other electronics. Today, you will have to look hard to find them. Their main function is to regulate the flow of electrons in electronic circuits and they look sort of like light bulbs as they are made of sealed glass and contain a heated filament. Unlike a light bulb, there are also a couple of electrodes above the filament — a metal grid and positively charged plate. The electrodes are separated by a vacuum, hence the name vacuum tube. Electrons flow from the heated filament, through the grid to the plate. This is referred to as thermionic emission. The grid can be used to interfere with the electron flow. Applying a small electric signal to the grid would lead to an amplified output signal thanks to the increased flow of electrons from the filament to the plate. 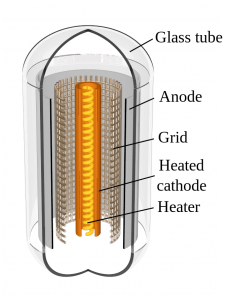 In the 1950s, transistors began to take the place of these vacuum tubes thanks to their small size and low power requirements. Transistor research evolved and eventually silicon transistors gained traction due to their low-leakage switching capabilities. Researchers have since been working to make these transistors smaller and smaller to meet the demand for faster, smaller, and less power-intensive electronics.

The IEEE Spectrum article “Introducing the Vacuum Transistor: A Device Made of Nothing” now indicates that it might be time for traditional silicon to step aside and allow the new hybrid vacuum transistor to reign the world of electronics.

The vacuum transistor looks very similar to a MOSFET, with a source, drain, gate, and insulator. In the case of a MOSFET, a voltage is applied to the gate, which generates an electric field in the semiconductor material (silicon, typically) below the gate. Current then flows in the channel between the source and drain, but never into the gate, thanks to the insulating oxide layer.

Concept of a MOSFET.

Combining the Two Concepts into a New Design

The main difference between a MOSFET and the new vacuum transistor is that the electrons flow from the source to the drain through a vacuum instead of silicon. Unlike the vacuum tube, the distance between the source and the drain is small enough in the vacuum transistor that you do not need to heat the gate. Instead, electrons flow by way of field emission.

This is a big deal, as the race to make smaller and more powerful transistors has long been restricted by the need for silicon. Until the vacuum transistor, instead of eliminating the semiconductor material, what kept shrinking was the insulating oxide layer. Because of the MOSFET’s design, the insulator cannot keep shrinking until it’s gone. The vacuum transistor would supposedly solve this issue.

Get the Full Story