Before embarking on a build or renovation project for a concert hall, engineers can numerically investigate its acoustic conditions in order to predict how the room will sound. Concert halls typically have large dimensions compared to the wavelengths of interest, so they are best suited for a type of numerical analysis called acoustic ray tracing. By simulating a well-known concert hall and comparing the results to in situ measurements, we demonstrate that acoustic ray tracing is an accurate method for predicting acoustic conditions in concert halls and music chambers.

Sounds of the Konzerthaus Berlin

In the Chamber Music Hall Acoustics tutorial model, available as of version 6.0 of the COMSOL Multiphysics® software, we investigate the Small Hall of the Konzerthaus Berlin using acoustic ray tracing. (Note: You can skip to the end of this blog post for a button that will take you to the Application Gallery entry for the model.) 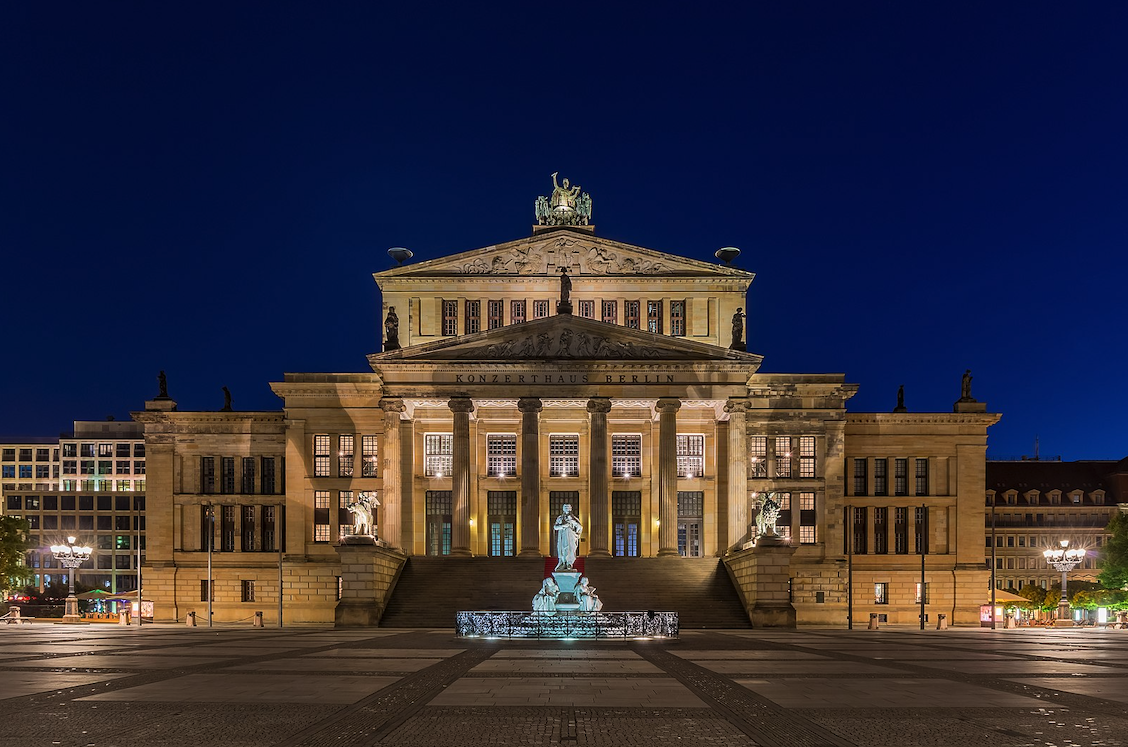 The Konzerthaus Berlin at night. Image by Ansgar Koreng — Own work. Licensed under CC BY 3.0 (DE), via Wikimedia Commons.

The Konzerthaus Berlin opened as a theater in 1821. It was designed by Prussian architect Karl Friedrich Schinkel. In 1945, at the very end of World War II, the theater was, unfortunately, destroyed.

Then, in 1979, the theater was rebuilt. It now boasts three separate halls:

In this tutorial model, we examine the Small Hall.

In version 6.0, the Acoustics Module, an add-on to COMSOL Multiphysics, includes enhanced ray acoustics capabilities, such as the ability to release rays with the intensity and phase distribution based on a user-defined spatial directivity function, or an Exterior Field Calculation feature from a previous study.

The tutorial model is based on a 2019 and a 2020 study by Brinkmann, Aspöck, et al. (Ref. 1–2) Its geometry has a volume of 2350 m3 and, contrary to the original publications, the concert hall’s seating is modeled as an extruded volume with a height of 0.8 m.

Footnote: All of the data from both Brinkmann, Aspöck, et al. studies is licensed under CC BY-SA 4.0. 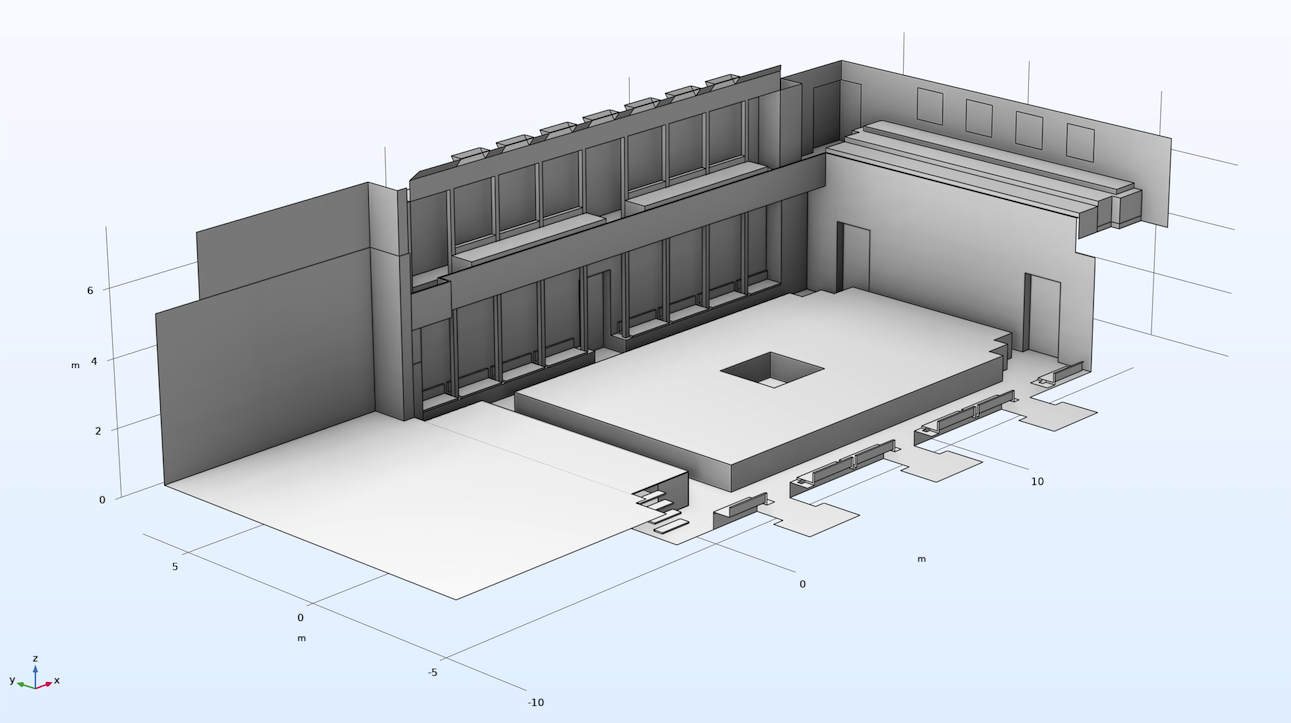 The study accounts for 1/3-octave bands with 10 pairs of source-receiver positions. On the stage, there are two omnidirectional source positions, and the central seating area includes five receiver positions. The room acoustics parameters are derived from the calculated impulse responses.

The acoustic ray tracing analysis provides insight into the acoustic behavior of the Konzerthaus Berlin. The simulation computes the amount of power carried by each ray that is emitted from the source over a frequency range from 100 Hz to 5000 Hz.

​
To generate the room impulse responses, the model calculates the acoustic power along each ray, taking into account air attenuation as well as mixed specular and diffuse reflections. The impulse response energy decay is used to compute the acoustic parameters of the room for a single source-receiver pair. The level decay curves are generated for all 10 source-receiver pairs, of which 10 values are then derived for each room acoustic parameter. The average over the 10 pairs is then calculated to find the overall average for the chamber hall. 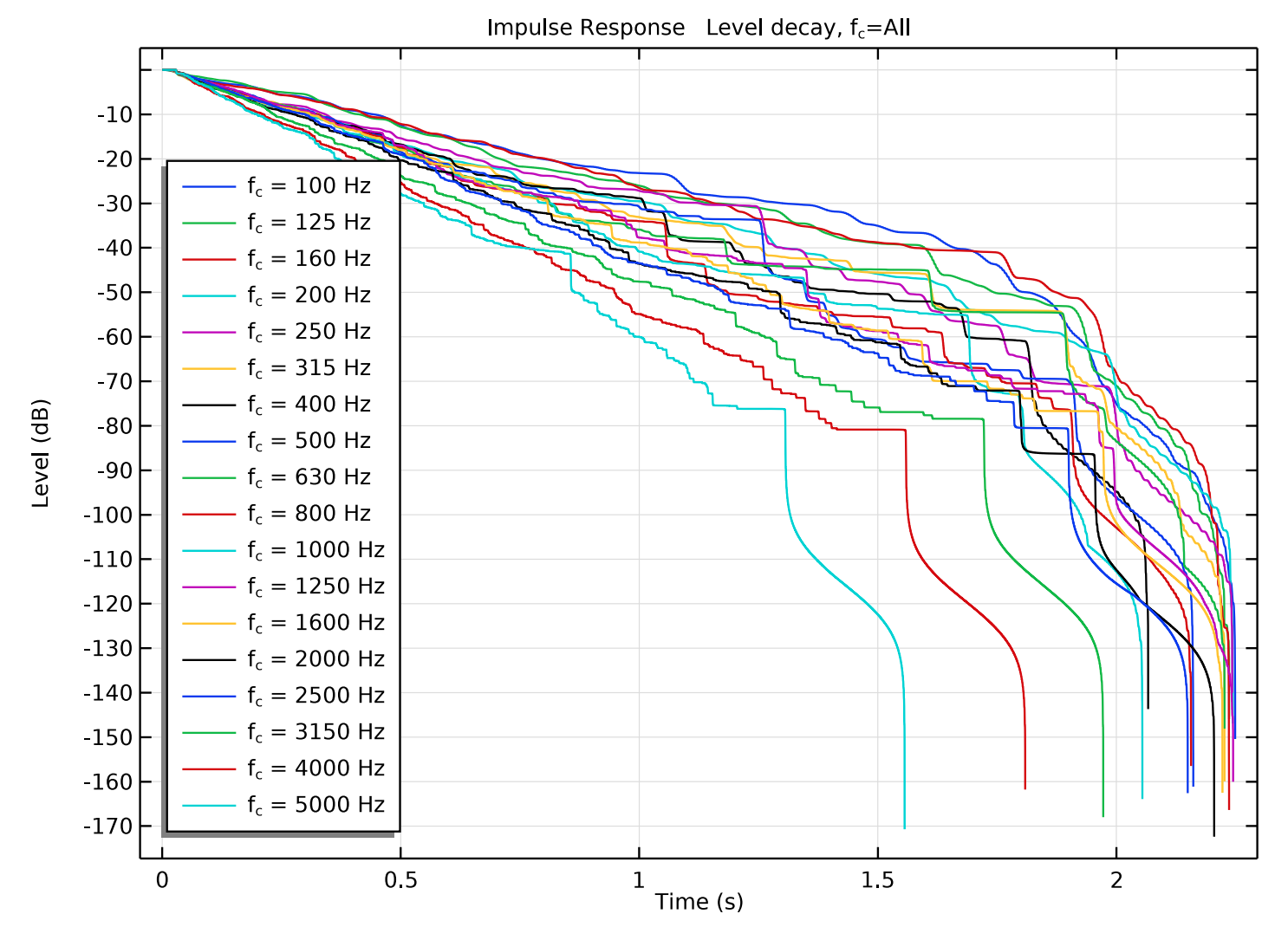 Level decay curves at different frequencies for one source-receiver pair.

The results from the acoustic ray tracing study are compared with in situ measurement data accompanied by an interval representing three times the value of the just noticeable difference (JND). The comparison found that the early decay time (EDT), which is closely related to the perceived reverberance of a room; the clarity (C80); and the definition (D) all agree well between simulations and measurements. 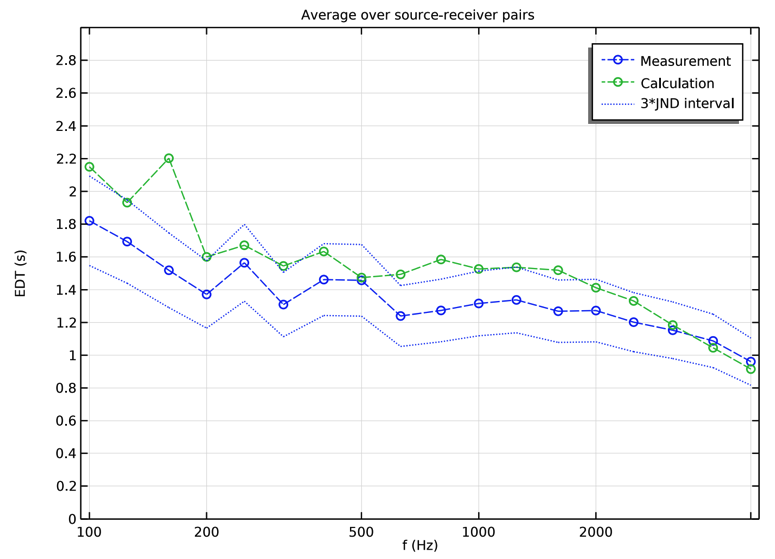 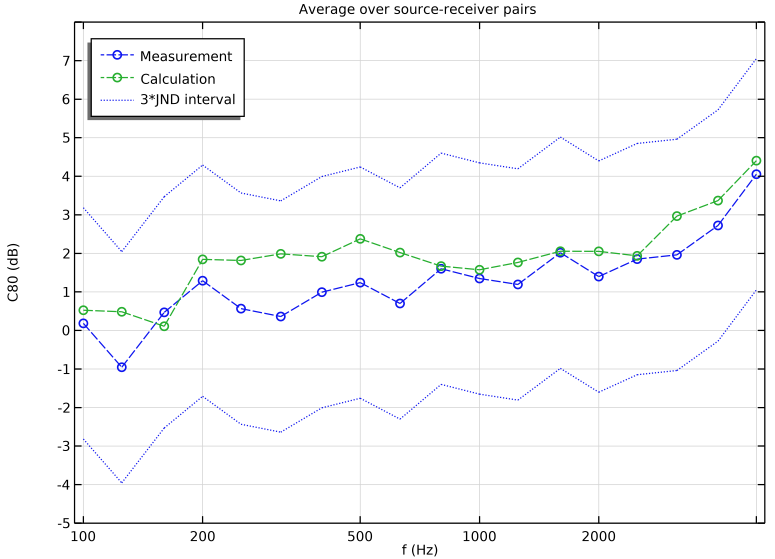 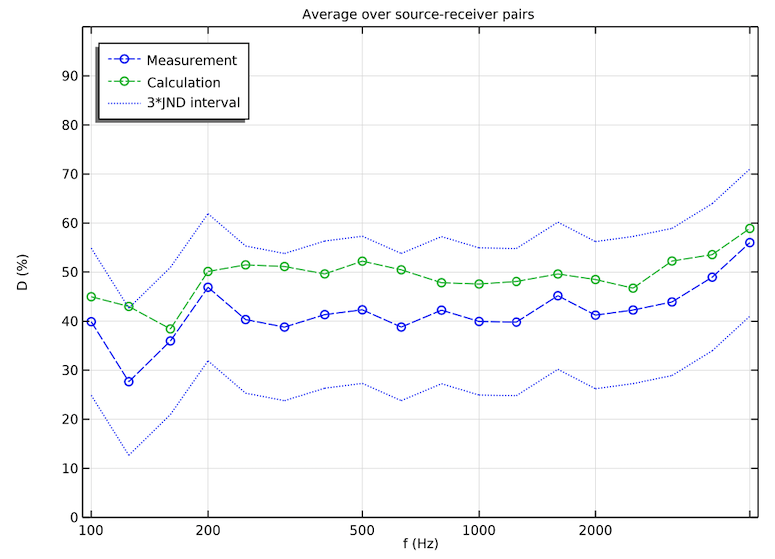 Comparison of the simulation results and measurements for the EDT (left), C80 (middle), and D (right).

Finding a good fit with measurements for these three parameters is an encouraging sign for the accuracy of acoustic ray tracing simulation for this type of study. 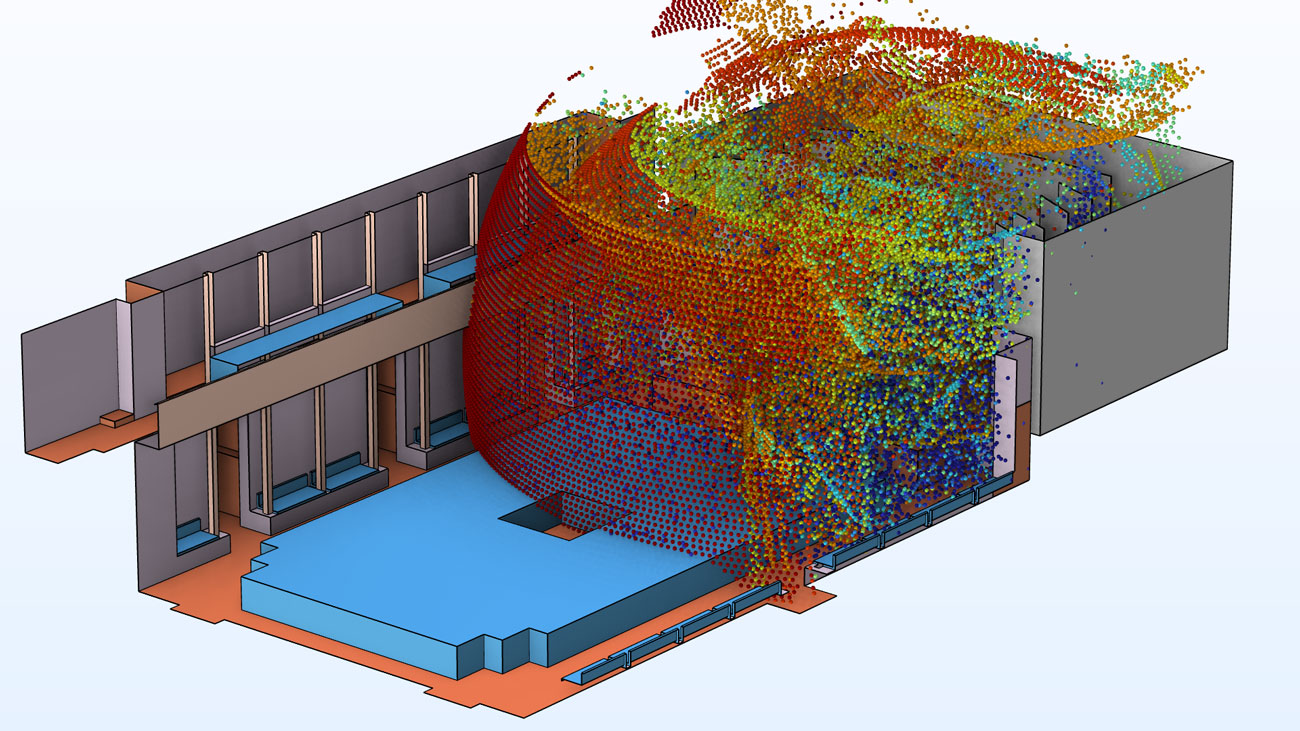 A full acoustic ray tracing simulation of the Small Hall of the Konzerthaus Berlin.

The Chamber Music Hall model demonstrates the potential of COMSOL Multiphysics for advanced room acoustics scenarios. Try it yourself by clicking the button below, which will take you to the Application Gallery entry. 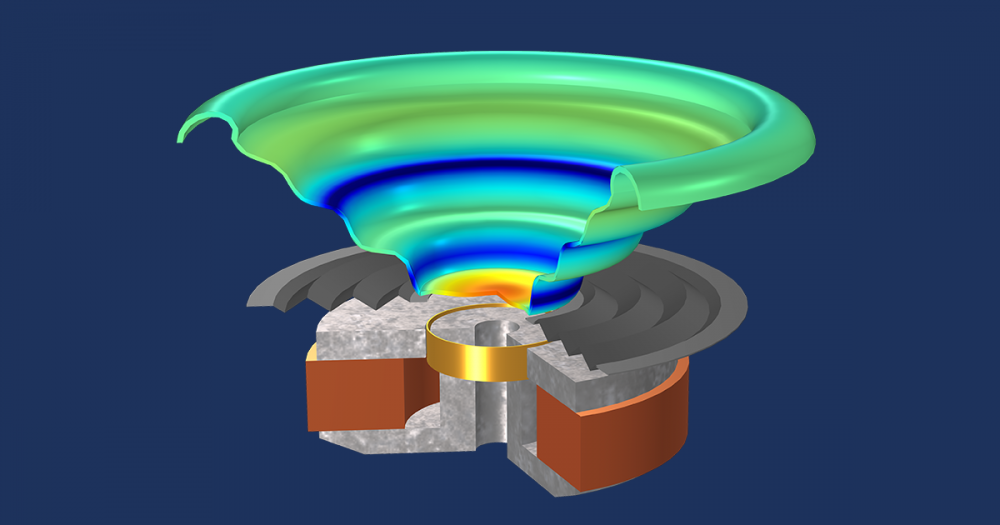 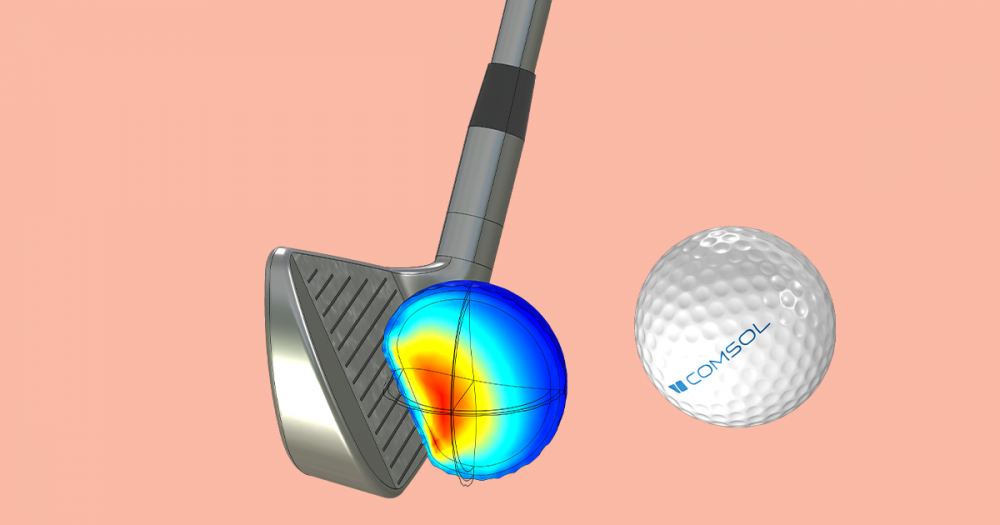