When Stars Align (and Collide): A Historic Gravitational Wave Discovery

Imagine that reading books with no pictures and 12-point font is all you know. One day, someone hands you a pair of 3D glasses and takes you to see a movie. This is how thousands of researchers and scientists in astrophysics might feel right now — they have been closely working on the recent groundbreaking gravitational waves discovery that enables us to get a clearer, brighter view of the universe.

What Are Gravitational Waves?

Scientists recently announced that a collision of two neutron stars, which happened a long time ago in another galaxy, generated gravitational and electromagnetic waves that were detected and observed for the first time in history. 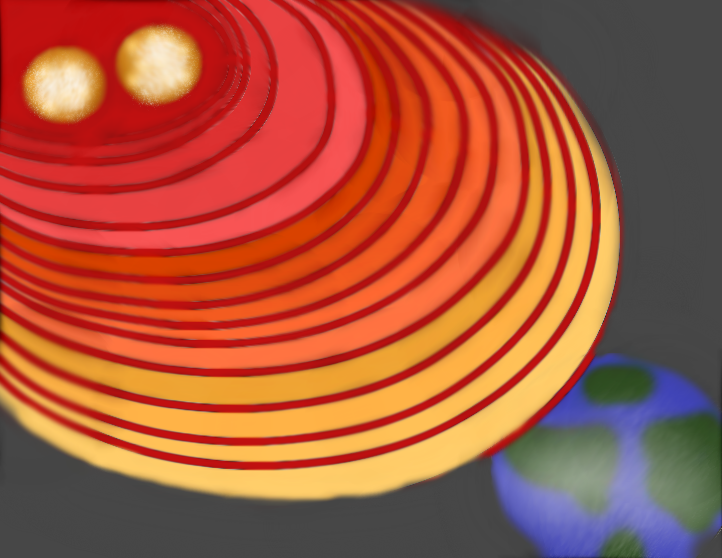 Artistic rendition of the neutron star collision and resulting gravitational waves. (Note: Colors do not denote any specific values.)

Think of a gravitational wave like a sound wave or the ripple effect that occurs when you drop a stone into water. When an event occurs somewhere in space, it generates gravitational waves. These waves are able to tell us a lot about the history of the universe and the space-time continuum.

The 5 Ws of the Gravitational Wave Discovery

The excitement and fervor of the researchers involved in this once-in-a-lifetime discovery remind me of how it felt to learn about astronomy and space exploration as a kid. So, let’s have some fun and break down this news with a classic 5 Ws essay explaining the who, what, where, when, and why of the gravitational wave discovery everybody is talking about.

Before and since the detection of the gravitational waves, thousands of scientists from over 70 laboratories have been working almost around the clock. This team effort involves research centers and telescopes located on all seven continents.

The neutron star collision occurred when two dying stars crashed into each other, causing a kilonova, the first observed event of its kind. The kilonova sent gamma rays careening through space, causing gravitational waves.

Animation from the LIGO detector showing the neutron star collision on NGC 4993 and resulting kilonova (in the white box). GIF is from Hubble Space Telescope, NASA and ESA and in the public domain via Wikimedia Commons.

This event is also unique because it was detected by both traditional telescopes and gravitational wave detectors, so scientists can see both gravitational and electromagnetic waves, a combination known as multimessenger astrophysics.

Technically, this all started 130 million years ago, when the collision of the neutron stars occurred. The waves reached Earth on August 17, 2017, which happened to be a few days before a total solar eclipse.

Aside from being a once-in-a-lifetime discovery, this observation also confirms a lot of assumptions about space. For instance, we now know that gravitational waves travel at the speed of light. Also, researchers were able to use data from the detected gravitational waves to calculate the age of the universe, which was close to current estimates.

The electromagnetic wave data was also analyzed, and researchers found that gold, platinum, and uranium were created in the star collision. This confirms another long-held belief that had yet to be proven: heavy elements are created when neutron stars collide.

LIGO and Virgo detectors are to thank for capturing the gravitational waves. These devices work as Michelson interferometers, which are able to measure the speed and length of light waves with precision. (A simple Michelson interferometer uses a transparent mirror to separate a beam of uniform light waves.) The LIGO and Virgo gravitational wave detectors, along with the gamma ray burst, resulted in the first-ever detection of a binary neutron star collision.

This groundbreaking observation answers a lot of long-held questions we have had about the universe — and opens up a lot more questions, too. For now, we congratulate these dedicated researchers on their discovery!

Find a detailed account of the gravitational wave discovery on Science Alert: